Is Kyiv preparing for its most insane and bloody provocation against its own people, then to blame Russia for everything?

According to the Ministry of Defense, RIA Novosti reports that Ukraine is accelerating the development of the so-called dirty nuclear bomb in order to use it on the territory of its country and launch a new campaign to discredit Russia.

According to the idea of ​ ​ the functionaries of the Kyiv regime (or their real masters from Western countries), the provocation should present Russia as a monster, a "nuclear terrorist," make it a real pariah - including for those countries that support our country's policy to resolve the Ukrainian crisis - Iran, China, India and many others.

What danger this carries, and how it can end - the correspondent of The Moscow Post understood.

First of all, the day before, a whole series of negotiations took place between Defense Minister Sergei Shoigu, head of the General Staff Valery Gerasimov and other responsible persons with their colleagues in the West - primarily the United States.

The Russian military warned their counterparts about the inadmissibility of such actions, described possible terrible consequences. Will this stop the Western patrons of Kyiv in providing support to the Zelensky regime and related nationalist circles? Hardly.

At the same time, Russia requested on October 25 a discussion in the UN Security Council of the situation with the impending provocation of Kyiv using a "dirty nuclear bomb." However, such a step may be blocked by our colleagues in the Security Council.

However, it is clear to all reasonable people: against the background of the intelligence information available to the Russian Federation, the topic should become number one for discussion not only in the UN Security Council, but at all world mediation platforms for an early settlement of this wild situation.

The UN has already reacted to Russia's warnings. As expected, the answer turned out to be streamlined and toothless. During the briefing, the official representative of the UN Secretary General Stefan Dujarric called on the parties to avoid steps that could lead to a miscalculation or escalation of the conflict.

It would be completely different if a "duck" was launched there that Russia wants to use nuclear weapons in Ukraine - that's when there would be much more numerous comments, warnings, fist shocks. At the same time, Western intelligence communities in recent days have still admitted that they have no data on Russia's preparation for a nuclear strike on Ukraine.

And it's not just that there really are no such plans. Lies, double standards, the principle of "post-truth" - have long become familiar and permissible in Western diplomatic practice. The point is the real fear that Russia can raise rates again - directly provoke fear. Why do they condone Kyiv - is this the same provocation? For the latter, such a provocation is a "foul of the last hope," which will allow the West to sharply increase aid to Ukraine and seal the sluggish anti-Russian coalition.

Work in the final stage

Earlier, the head of the radiation, chemical and biological defense troops of the RF Armed Forces, Lieutenant General Igor Kirillov, gave thorough explanations about the preparation of the "dirty bomb" by Kyiv. He noted that the work on its creation is in the final stage.

As Kirillov explained, in Ukraine there are three enterprises with reserves of radioactive substances that can be used for a "dirty bomb." These are three operating nuclear power plants - South Ukrainian, Khmelnitsky and Rivne.

Kyiv also has an appropriate scientific base. Scientists of the Kharkov Institute of Physics and Technology participated in the nuclear program of the USSR and experimental thermonuclear installations "Hurricane" work on the basis of the institute. In Kyiv, there is an institute for nuclear research at the Academy of Sciences, in which research with radioactive materials is carried out at the VVR-M reactor. 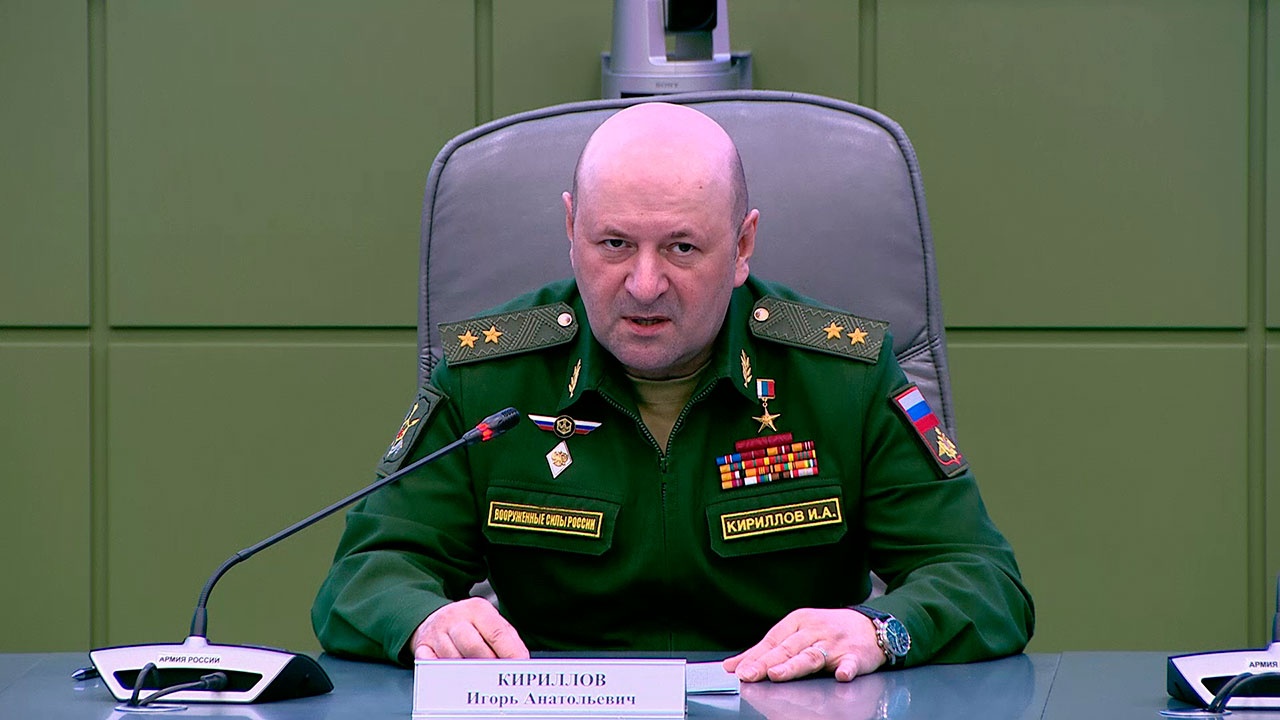 Detailed information on the preparation of a nuclear provocation by Kyiv was given to the Ministry of Defense of the Russian Federation. Photo: tvzvezda.ru

According to Kirillov, the detonation of a "dirty bomb" will inevitably lead to radioactive infection of the area on an area of ​ ​ up to several thousand square meters. The presence of radioactive isotopes in the air will subsequently be recorded by sensors of the International Monitoring System, Kirillov said.

"As a result of a provocation using a" dirty bomb, "Ukraine expects to intimidate the local population, increase the flow of refugees across Europe and expose the Russian Federation as a nuclear terrorist," the lieutenant general said.

In addition, the Ministry of Defense noted that Great Britain, which is one of the five leading nuclear powers, is actively helping Ukraine in creating the bomb. Actually, there is a nuance here: it turns out that London, not Washington, is the main "refueling."

Recently, the foreign policy of the United Kingdom has been criticized for losing subjectivity to please overseas allies. The European Union is also reproached for this. Apparently, against the background of political leapfrog and the economic crisis, Britain also wants to regain its status as a powerful subject of international politics - and in its madness it is ready to go further than the Biden administration.

Like the United States, this could be expected from Britain. The colonial past, the poisoning of China with banned substances in the 19th century, the genocide of small peoples - why not play with a nuclear toy in the 21st century if the explosion does not happen on your territory? And let Europe be nearby - a radioactive cloud may not reach Foggy Albion.

The logic is frankly vicious, insane. But it can work. And there is nothing to say about Kyiv. According to the results of eight months of the special operation of Russia, we were convinced that the Zelensky regime does not spare its own citizens, throws them to slaughter. At the same time, he continues to actively fire rockets at civilian infrastructure in Russian cities - Kherson, Donetsk, Lugansk. It carries out massive terror both in the liberated territories and in the depths of our country.

It seems that in his thirst to destroy Russia, Ukrainian President Volodymyr Zelenskyy and his patrons decided to finally "exchange" "Independent." However, her elite, or at least the top, has nothing to worry about. After all, the whole family of the same Volodymyr Zelensky has long been living in the UK, has British citizenship.

It is noteworthy that after the shameful resignation of Liz Truss, one of her last decisions, she provided Kyiv with guarantees of $500 million through the World Bank. So to speak, on the track...

In addition, it is not known for certain where Zelensky himself is. After the frames of the "green room," from which he records his appeals "on his feet," it is clear to everyone that the picture can be anyone - Vladimir Alexandrovich could also broadcast against the background of the Moscow Kremlin.

Perhaps the only organization that adequately and timely responded to intelligence information and warnings from the Russian Federation was the IAEA. Its general director Rafael Grossi will come to Ukraine to assess the situation, receive comments from the Kyiv authorities.

Perhaps Mr. Grossi was influenced by a recent meeting with President Vladimir Putin, who, according to Grossi himself, surprised him with deep knowledge of the nuclear topic, including the work of the Zaporizhzhya nuclear power plant.

It seems that the head of the IAEA, Rafael Grossi, is one of the few who took Russia's warnings seriously and sent specialists to Ukraine for monitoring. Photo: ryb.ru

But who said that Rafael Grossi in Kyiv will be given reliable information, everyone will be shown and told? Rather, a plausible picture will be created for him, while the development of weapons can be carried out in a closed laboratory with an extremely limited admission.

Even before the start of the special operation, Russia assumed that Kyiv was striving for the possession of nuclear weapons. Volodymyr Zelenskyy himself publicly mentioned this possibility more than once.

He later spoke at a security conference in Munich, where he also outlined his ambitions in this regard. At the same time, talk continues that Ukraine should not have given nuclear weapons to Russia after the collapse of the USSR - they say, then there would have been no conflict.

We add on our own that in that case the world would have approached a dangerous line much earlier, because from Ukraine nuclear weapons could easily fall into the hands of international terrorists. Actually, because of this danger, all Western countries so quickly agreed to the nuclear disarmament of Ukraine.

At the same time, the manic desire to accuse Russia of all sins surprises. Provocations continue one after another. First there was Bucha, then reprisals against peaceful Russian teachers in Kupyansk, Kharkov region, and other places. Now they want to make Russia a nuclear terrorist. This time our country decided to act on preemption, and, as they say, hits all the bells.

Recall that earlier Kyiv repeatedly threw information that Russia wants to arrange a leak of nuclear fuel, first at the Chernobyl nuclear power plant, then at the ZPP. Then there were numerous shelling of the latter by the Armed Forces of Ukraine, again - in order to provoke a nuclear catastrophe and blame Russia for everything. One of these shelling in September was almost hit by a group of IAEA specialists led by the same Grossi. But everything is useless.

I would like to believe that even the Kyiv regime will have the mind not to use this last "argument" to discredit Russia. It does not seem beneficial to the States either - but at least they would definitely turn a blind eye to the preparation of such a scenario. Did the directors of the 95th quarter go too far - so much so that there will be nowhere to go? And no one.