Why can't modern Armenia learn the lesson of Ukraine?

According to The Moscow Post, Armenian Prime Minister Nikol Pashinyan announced his readiness to resign "by the decision of the people." The politician stated this on Facebook, adding that the opposition also did not deserve support, despite its huge financial and media resources.

According to his words, the only way to solve the ongoing political crisis in the country is early parliamentary elections. However, elections, according to "mistaken" with Nagorno-Karabakh Prime Minister must be held using the two years ago recipe, when  Pashinyan himself for the first time took the position of Head of the Cabinet.

This option involves the resignation of the Prime Minister, after which the parliament must elect a new one. If this is not done twice, early parliamentary elections are called. For this option, Pashinyan needs to agree with all the parliamentary powers, and he has already invited them "for consultations". This is reported by TASS.

In order to persuade Pashinyan to negotiate with the opposition, it took only a few weeks of "Maidan" in the Ukrainian way. There are protesters with tents on the main square of Yerevan every day. If they do not understand the danger of where things are going, then the power-grabbing Pashinyan should understand it. But he can see no other way out.

Early elections will inevitably lead to a worsening of the crisis in Armenia, as a result of which the country's residents risk getting even less adequate and successful leadership, and even provoke a new round of internal and external confrontation.

Pashinyan is trying to cheat and gain time, forgetting that he has lost support not only inside, but also outside the country. Earlier, President Putin supported Pashinyan, refusing to consider his policy treacherous towards Armenia. In fact, Putin understands that Pashinyan's power has weakened, he is unable to offer effective solutions and is following the opposition, for which the parliamentary elections will be only a formality in order to completely remove Pashinyan and his political power from the political arena.

For Russia, this threatens new uncertainty about compliance with the Karabakh agreement dating November 10 and, in general, where Armenia will move next. Meanwhile, the United States and the Soros’ Renaissance Foundation, which represents this country, have lost their leverage over the events taking place in the country. Even if Pashinyan is supported in the elections, they will only harm him.

The protesters are ready to go all the way and depose Pashinyan just as he deposed Serzh Sargsyan in 2018 with the support of the same street. Neither they nor those who support them in their democratic endeavors understand one thing. There was the Bulldozer Revolution in Yugoslavia, there was  the Revolution of Roses in Georgia, Maidan in 2004 and 2013 in Ukraine. The result has always been the same - further immersion in the crisis, the erosion of state institutions, the surrender of national interests and the "pulling apart" of the country.

There was also, as already mentioned, the Velvet Revolution in Armenia in 2018. All these events were held under the supervision of Western partners, all aimed at building a democratic and legal society. Thus, it is more surprising that the protesters in Armenia today are again set up for this scenario. Neither the experience of Ukraine, nor their own one, seems to have taught them anything.

Almost 30 years have passed since the first agreements on Karabakh. The unrecognized Republic within Armenia has remained unrecognized in the UN - the legal basis for recognizing it as a part of this country has not appeared. Officially, the whole world recognizes Artsakh as a part of Azerbaijan. Moreover, the analogue of the Minsk agreements concerning Nagorno-Karabakh of thirty years ago was not observed.

For 30 years, Azerbaijan has been engaged in strengthening its own army and statehood, as well as establishing contacts with the powerful ones of this world. First of all, with Russia, Turkey and Pakistan. The plan for the return of Karabakh has been maturing in the minds of the country's elite under the leadership of Aliyev for many years - there is no doubt about it. What has Armenia and its leadership been doing all this time?

They were engaged in political mouse fuss, an attempt to integrate into the Western establishment and get the patronage of the United States and the European Union. That is, the focus is not on their own strength and capabilities, but on supporting people and institutions that are not interested in the development of Armenia.

That is, they have been engaged in the "maidanization" of the country, and for all the last ten years.  Colour revolution attempts in the country have been made before. In 2018, the parliamentary elections were won by Serzh Sargsyan, who was considered to get along well with Russia. Moreover, he even managed to establish a dialogue with Turkey. At the same time, Sargsyan was from a conditional Karabakh clan, he himself fought during the first war of 1992-1994.

Sargsyan snatched the victory from the first president of Armenia Levon Ter-Petrosyan. Rallies and clashes began in the streets, which were dispersed, and to which Human Right Watch responded. Subsequently, as some experts claimed, Sargsyan summed up the emphasis on a conditionally patriotic ideology, the main character of which is called a native of Armenia Garegin Nzhdeh - an analogue of Ukrainian Bandera.

Nzhdeh was accused of collaborating with the Nazis, destroying prisoners and civilians. In Azerbaijan, he is called exclusively a criminal. The irritation of the leadership of this country with such rhetoric only spurred the Sargsyan’s team to follow this ideology, but it did not help Sargsyan at all in 2018. Meanwhile, the patriotic intensity in Armenia kept growing.

In 2008, the colour revolution did not happen, it happened ten years later. Having taken the helm of the government, Pashinyan did everything to "bend" and please Western partners. Before the military collapse of 2020, there were two years of ingratiating and surrendering national interests. At the same time, Pashinyan, without rejecting the ideas of Nzhdeh, so as not to quarrel with the hooray-patriots, even had the courage to remind Russia of contacts with the Third Reich. This was written by Lenta.ru.

Even earlier, in 1998, Ter-Petrosyan stated that the rejection of a compromise on Karabakh and maximalism — is what the entire ideology of Nzhdeh had led to, together with the emphasis on the thesis that the West would help them, would definitely lead to tragedy. This is exactly what happened, even despite all the events in Ukraine, which is not far from Armenia, where the same scenario has been unfolding for the past six years.

After that, Ter-Petrosyan was under massive pressure for crossing the red lines. As a result, he was forced to resign as president of the country, but life has shown that his forecast was absolutely correct. Today, along with Serzh Sargsyan, Ter-Petrosyan is called one of the likely candidates to replace Pashinyan, but the "charged" street will not accept Ter-Petrosyan. The same as the patriotic public does not accept any Ukrainian politician who decides to seek a compromise on the Donbass.

On the same rake

Then, in 1998, Ter-Petrosyan proposed to give Nagorno-Karabakh broad autonomy within Azerbaijan. It took 20 years to finally miss this chance and almost completely lose Artsakh.

In 2015, "Maidan" was held in Armenia again. At that time, "Electrical Maidan" - and already with an anti-Russian smell. People took to the streets because of the increase in electricity tariffs - by a ridiculous  for the same modern Ukraine 40%. Meduza wrote about this (it is a foreign agent on the territory of the Russian Federation).

At that time, the opposition insisted that Armenia's electricity networks were owned by Russia's Inter RAO. That protest was suppressed by the authorities, it eventually resolved. But it has become a marker of the growing tension in Armenian society. As a result, a year and a half after the Electrical Maidan, Inter RAO was forced to leave the country under the pressure of this and a number of other factors.

In 2016, a participant of the war in Karabakh, opposition leader Jirair Sefilian, was imprisoned. His release ended in a real terrorist attack - supporters of the politician seized a police station, a person was killed. Sefilian began to oppose possible compromise agreements on Karabakh - it was said that they were about to agree. But the hooray-patriots did not agree. 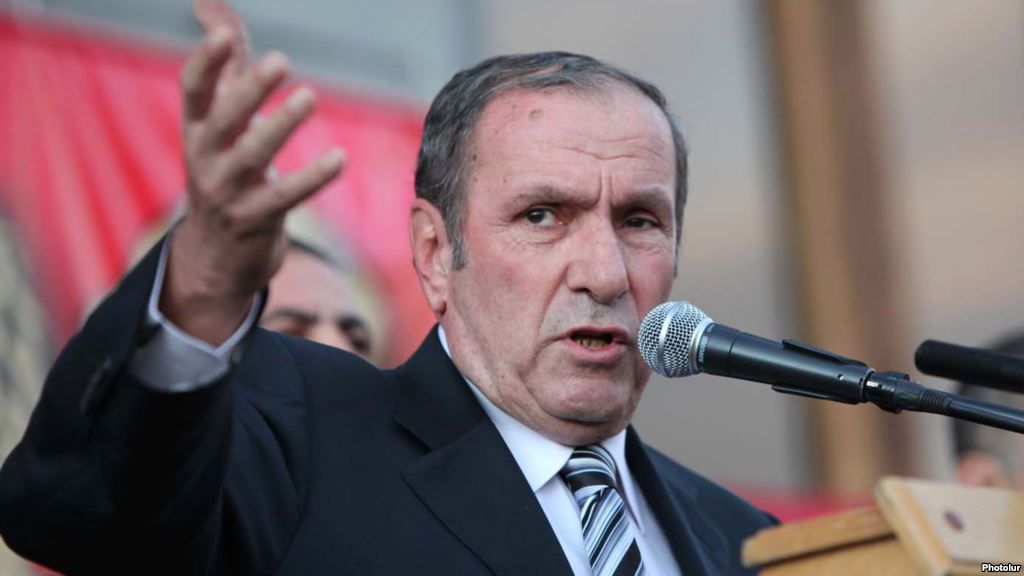 Then Deputy Nikol Pashinyan was noticed at the rally. But he did not lead the protests - the smell of crime, in the end it was the right decision. Pashinyan managed to be noticed, without exposing himself to the articles of the criminal code. In just three years, he rode this wave, and with the support of Western embassies, received the post of Prime Minister. The catastrophe in Nagorno-Karabakh is getting closer for Armenia.

What does the Armenian Government do in such cases? In 2017, Armenia signed an agreement with the European Union - similar to the one that Ukraine signed in the wake of the escape of Yanukovych and his government. In Ukraine, they were simply shocked - they did not know that it was possible to sign an agreement without giving up trade cooperation with Russia.

But Pashinyan’s hopes turned to disappointment. He received almost the same thing that Ukraine received - attempts to tear the country away from Russia. In 2018, Serzh Sargsyan tried to use a trick in the legislation, not to run for president, and remain the head of the government. Sargsyan tried to negotiate with Pashinyan, who then had 7% support.

Just as Yanukovych tried to negotiate with the European Union, when it was already clear that they did not need a compromise - they needed a change of power. What happened next, the prepared public knows. Maneuvering and fawning over the West, which at the crucial moment left Armenia to the mercy of fate.

Today, the political crisis keeps growing in the country, but the lessons of Ukraine and Armenia in recent years have not been learned. The result is likely to be a new coup and further degradation of political life and the surrender of national interests — however, this time the country is in a much weaker position. Armenia will not be able to become a self-sufficient state until the country understands that stability and development can be achieved only relying on its own strength and national interests.