At the Munich Conference-2023, they will discuss not security issues, but develop a plan to destabilize Russia from the inside.

Organizers of this year's Munich Security Conference declined an invitation for Russian officials to participate. But the Russian so-called "non-systemic opposition" will be invited there. However, it can be called Russian with great difficulty - it does not live in the country, it is financed by Western governments, and its goal is to change the political system in our country.

More details - in the material of the correspondent of The Moscow Post.

The statements of the conference organizers look absolutely cynical. According to the chairman of the conference, Christoph Hoisgen, the country that has amended international law, by which it means Russia, does not deserve an invitation to the conference.

Then it is completely not clear what the United States will do on it. The states have repeatedly violated international law, did not have a mandate at the UN to invade the same Iraq, where up to 1 million people died as a result of the intervention. For these crimes, no one was ever convicted.

Before that, there was Yugoslavia, destroyed as an independent and united state. NATO members also did not fulfill their obligations on Kosovo - they simply rejected this territory, threatening another invasion. The list can continue.

On the basis of what norms of international law were Libya bombed? What norms and rules were the same US guided by during the invasion of Syria, where, by the way, they are still without the invitation of the official Syrian government?

A similar question can be asked of Turkey, which conducts military operations in Syrian territory, as if in its backyard, without asking anyone or anything. The reason is understandable: Recep Tayyip Erdogan believes that this is necessary to ensure the security of his country. This reason can be accepted, but why, according to such a logic, Turkey will be present in Munich, and Russia, which also ensures its security through the Special Military Operation, will not?

All this levels the value of the conference, makes it not a platform for expressing opinions, coordinating positions, but an inter-conflict, which in 2023 has a clear anti-Russian orientation. So I would like to ask - against whom are you friends? The answer, however, is known.

However, the announced participation of the "non-systemic opposition" gives this discord a completely special meaning. Whose interests are represented by a whole heap of foreign agents receiving money for anti-Russian activities from our former Western partners?

Many of them calmly settled on the Riga Sea, while the Baltic countries almost spit saliva in their dreams to destroy and dismember Russia. This is not hidden, it is said directly. The main "chants" of the conference also do not hide their intentions.

On the eve of the Davos Economic Forum, German Chancellor Olaf Scholz bluntly stated: the only way to stop the conflict in Ukraine is the defeat of Russia. Therefore, Ukrainian neo-Nazis should be provided with more tanks, air defense systems, and other weapons. But earlier at that event they discussed issues of economic development, integration of economies. On the face of the complete degradation of such European sites.

Polish President Angey Duda at that "economic" forum wrapped all the thresholds, gathering a coalition of Western countries to supply armored vehicles to Kyiv. Deputy Head of the Russian Security Council Dmitry Medvedev called it a "disgrace."

"They hope, probably, that the" tank coalition "will bring the long-awaited division of Ukraine into parts for the Psheks. But then it is not necessary to create a coalition, but to draw up a collective paper. About the surrender of the rotten Kyiv regime in order to preserve people. And about the future configuration of what will remain of Nezalezhnaya, "he noted in his telegram channel.

What can be offered by "non-systemic" with electoral prospects in the Russian Federation at the level of statistical error? Yes, all the same as before - a violent change of power on the model of Kyiv-2014, with pogroms and seizures of administrative buildings. And then - a whole round of repression, lustration, in general, a complete set, which will invariably be accompanied by the destruction of the economy, discrimination of entire strata of society.

That is, the conditional West does not rely at all on security, but on the destruction of Russia from the inside through an unconstitutional coup d'état, savagely seasoned with hatred of our history, values, traditions. To our very right to defend against external pressure and remain a single state.

However, the Russian leadership back in 2022 had no illusions about the upcoming event in Munich. Last December, the Foreign Ministry said that the Russian delegation was not going to participate in the Munich Security Conference in 2023, even if it had received an invitation.

According to the representative of the Foreign Ministry, in recent years the Munich Conference has turned into a purely transatlantic forum, has lost inclusivity, objectivity and equidistance to the speakers speaking from its rostrum. In addition, even then it was known that representatives of the Russian non-systemic opposition would be invited to it, which cannot be regarded otherwise than an attempt to intervene in domestic Russian affairs.

But last year marked the 15th anniversary of the famous, historical speech of Vladimir Putin, said in the same Munich. In it, he anticipated many processes in international politics, including the war on terrorism, the destabilization of the Middle East, and gross US interference in the affairs of other countries.

Then, when this platform was still a place for discussion, Vladimir Putin warned Western partners that neocolonial policies and the process of NATO expansion would inevitably create risks for Russia's security, they would have to be answered. They did not listen to him then, although everything turned out that way. The history of our former Western partners does not teach anything. But let her teach us at least.

The overthrow of the legal authorities by coup did not bring Ukraine anything good. The destruction of the economy, the curtailment of civil liberties, finally, an open discriminatory policy towards Russian-speaking citizens and the prospect of turning the country into a huge military base of the Western military bloc.

The result was critical security risks for Russia, to which it was forced to respond. After it became known that no one except Russia was going to fulfill the terms of the Minsk agreements, which former German Chancellor Angela Merkel calmly admitted after ex-President of Ukraine Petro Poroshenko. 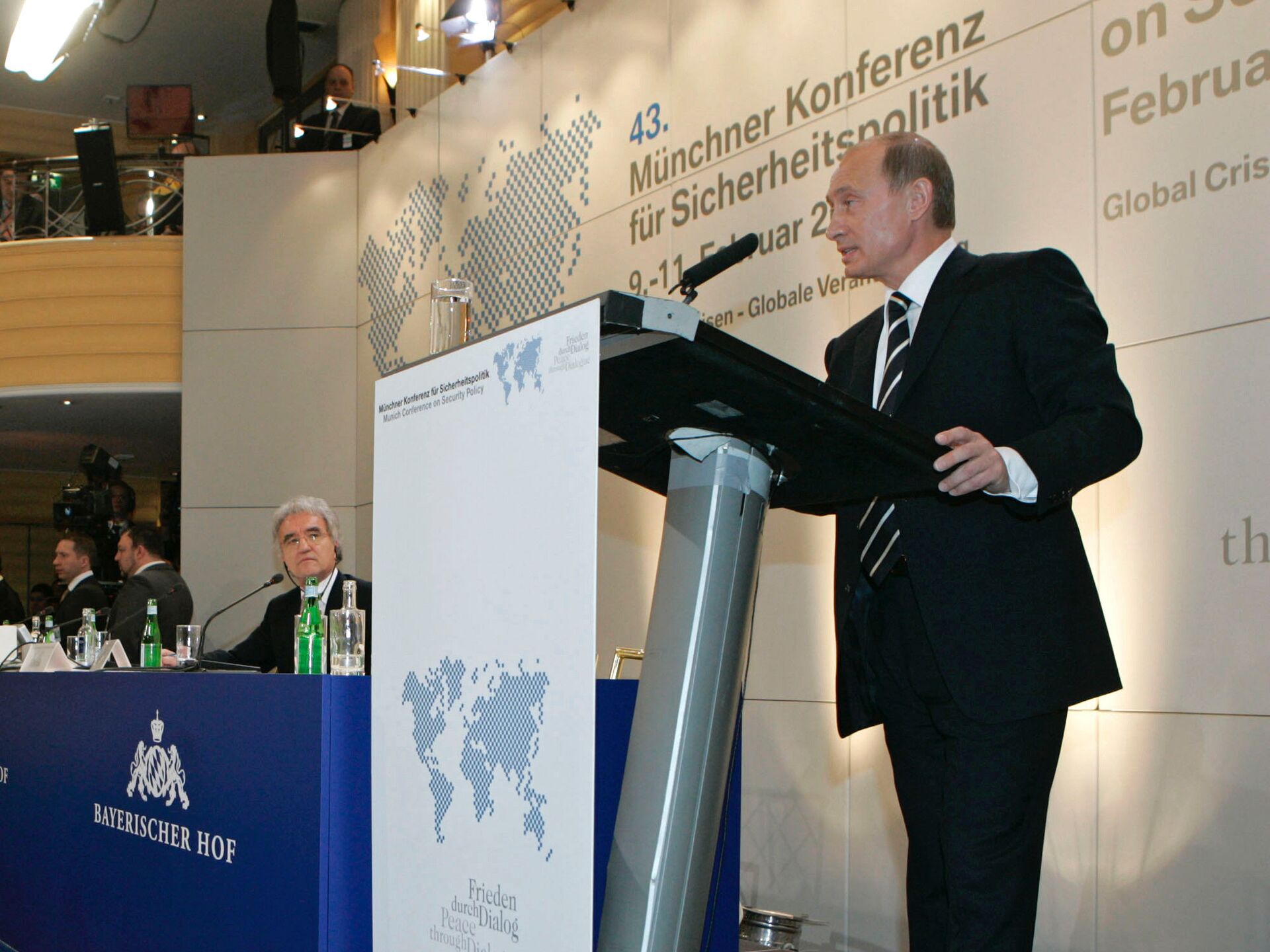 Therefore, the discussion of international security in Munich is replaced by a completely different one: a discussion of how to hit Russia harder and more painfully. And the obsessive desire to dismember our country along the borders of the national republic speaks of utter madness, because the Russian Federation has an arsenal of 15 thousand nuclear warheads. Apparently, Europe dreams of them spreading around the world. Does such a world order seem safer to them?

It seems that here it is time to recall the famous Munich collusion, when Czechoslovakia was given to the Nazis to be torn to pieces. A piece of which, by the way, was also thawed by Poland, as Western Ukraine now hopes to get.

By the way, yesterday, at the Economic Forum in Davos, Henry Kissinger warned about threats from the collapse of Russia so desired by the West. But onlookers from the Western political establishment managed to accuse him of taking outdated approaches, although this is the only voice of reason that sounded at the event. It seems that this will not happen at the Munich Security Conference either.