The situation with unauthorized protests in Mongolia can be used by Western special services to "deploy" the country's foreign policy vector from Russia and China to the United States.

In Mongolia, unauthorized protests of residents of the country have not subsided since Sunday. And although most of them left the square in front of the Government Palace before the threat of violent dispersal (people were warned in advance), people's discontent did not go anywhere, fueled by the Western press and, it seems, a significant number of instigators from Western and not only agents.

What is the reason and what are the possible consequences - in the material of the correspondent of The Moscow Post.

The reason was the situation with the theft of coal at the border, which was mined by the government company Erdance Tawan Tolgoi. The resource was intended for the country's key trading partner - China, but as a result it received 6.5 million tons of coal less than it was sent from Mongolia on securities.

According to preliminary data, as a result of criminal actions, Mongolia suffered losses worth about 1.8 billion US dollars. Officially, these figures have not yet been confirmed, but even if the order of these figures is similar to the real one, then for a relatively small and poor Mongolia this is a huge amount.

And not just huge. 86% of all Mongolian exports go to China, and more than half in total terms is coal. I.e. for Mongols, it is a commodity associated with national security and macroeconomic stability.

At the same time, against the background of such embezzlement, essential products continue to rise in price in the country, not to mention goods related to the same petrochemistry. Apparently, among Mongolian officials, no one expected that such thefts would cause such a powerful wave of popular anger.

Even the message of the Chinese side, which also launched an investigation, about the execution of officials involved in fraud did not help. RIA Novosti wrote about this.

In Mongolia itself, ten criminal cases were initiated on the facts of coal theft in three types related to contracts, transportation and railways. This was told by the Minister of Economic Development of the country Khurelbaatar Chimed. He stated that influential people and officials were involved in the theft, and named five former directors of the state-owned company Erdance Tawan Tolgoi as criminal suspects.

The management of the same company was accused by the police of inciting riots. According to officials, top managers could use social networks to involve citizens, including minors, in unauthorized actions. Even if so, it is faintly believed that they would take such a risky step without feeling the support of part of the elites or serious forces on the side.

Tear away from Russia and China

In itself, the reaction of Mongolian society to such large thefts is not surprising - they demand to punish the perpetrators. However, it quickly exceeded all expectations, when discontent instantly resulted in unauthorized protests, they became massive and even went beyond Ulan Bator.

They recalled the character of seemingly chaotic, but tailored to similar patterns of unauthorized protests that took place in Kazakhstan at the beginning of 2022. Then, we recall, the "trigger" was a sharp increase in prices for liquefied gas in connection with the transition to a market pricing mechanism.

They began in the gas-producing city of Zhanaozen in the west of Kazaskhatan, but in just a few days they covered Alma-Ata and other regions of the country. And from economic requirements, the participants switched to political ones, including the resignation of the government and the withdrawal from the policy of the first president of the country, Nursultan Nazarbayev.

The riots were massive, people began pogroms. The national police and even the army did not cope in this situation - moreover, part of them sided with the protesters. Then only the instant reaction of the CSTO and specifically Russia, which transferred forces to protect the most important objects, was able to calm down the rioters. And the question still remains - what was it?

Such unrest often develops against any logic. And yet, the trace of our former Western partners, who covered the events in Kazakhstan also one-sidedly, as they cover them now in Mongolia, is too noticeable.

It seems that they are trying to use the situation both then and now for political purposes. And what can be the goal, except for the reproduction in these countries of regimes focused on Western institutions - the EU and NATO. This means forces hostile to the other two poles in the region - Russia and China.

To China - to a greater extent. Now the United States, with one hand fanning the fire of the confrontation in Ukraine, is trying to set fire to Asia with the other. They are trying their best because everyone has an understanding - there is a likely battle for Taiwan ahead. And even if the party advocating a single state with China won the last in the extreme parliamentary elections, the big game does not stop.

By knocking Kazakhstan and Mongolia out of Russia and China, we can create a new belt of instability around our countries, which have become very close as a result of reformatting the geopolitical order. Will the United States abandon a large military base in Kazakhstan or Mongolia? Even if it causes major discontent among neighbors?

No one doubts that a variety of special services could be behind part of the protest activity, primarily the United States. And here is the result: as the Australian The Sydney Morning Herald writes: finding himself between "Bear" (Russia) and "Dragon" (China), the government in Ulan Bator suddenly began to strive for closer contacts... with Australia.

The one that is part of the newly created military-political bloc AUKUS, consisting of Australia, Great Britain and the United States.

Interesting statements followed: the Deputy Prime Minister of Mongolia suddenly said that Mongolia, it turns out, shares common values ​ ​ with Australia - such as democracy and human rights. That Mongolia is, it turns out, a former satellite of the Soviet Union, and does not intend to support the power actions of China, Russia or any other country in the world.

Mongolia did remain a neutral party to Russia as part of its Special Military Operation to protect Donbass. Now, we must understand, there are attempts to shift this position to a pro-American one. And against the background of diplomatic "successes" of Russia, they may succeed.

People are used as a human shield, as meat. And we must also pay tribute to the officials in Ulan Bator that they did not put pressure on the trigger and use serious force on the protesters. Blood, broken cars, wounded people - all this is a real gift for Western propaganda, without which so far, thank God, there has been nothing.

There is one more point. In the case of Kazakhstan, for the first time in its history, the CSTO mechanism worked, and worked clearly. Mongolia is not a member of the CSTO. But the question of its inclusion in the organization is, at least, from 2020. After January 2022, those conversations got louder. After the start of the SVO, as well as the current events in Ulan Bator, no one stutters about this. This is another latent goal of those riots that swept through the country.

The conclusions can be made disappointing. Even if unauthorized protests in Mongolia are spontaneous and objective, they are trying to use them to swing the internal situation in the country. And geopolitical players are already offering their solutions to the government in Ulaanbaatar. And Russia here, unfortunately, is not a favorite at all. 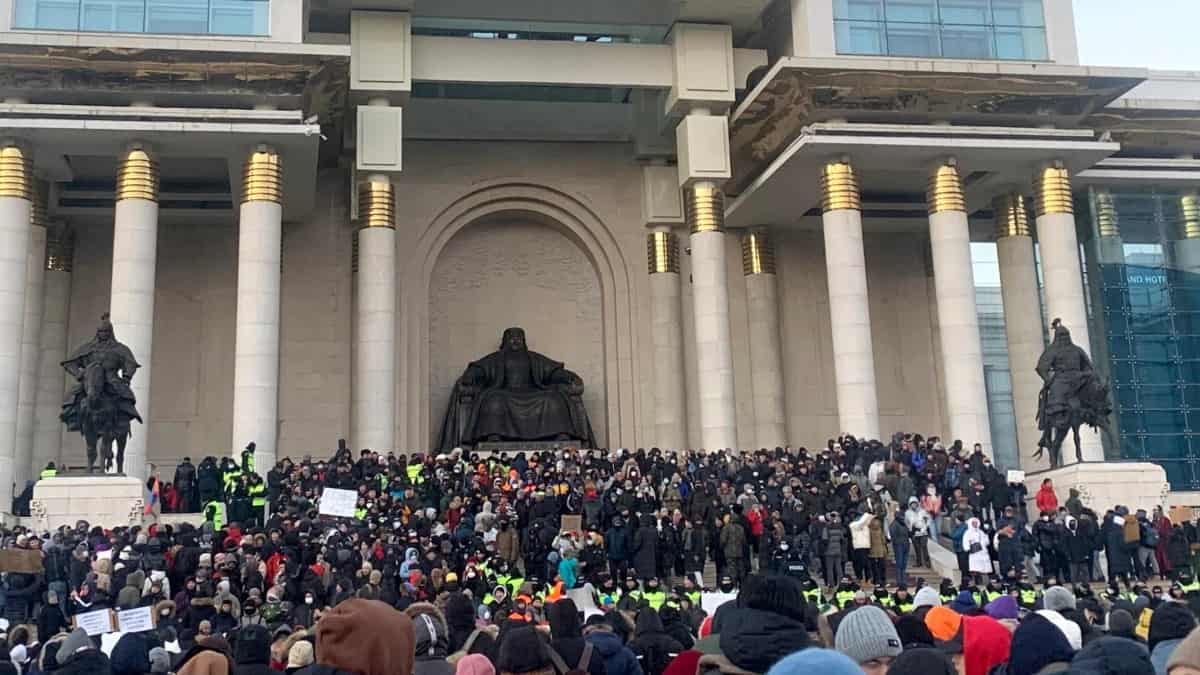 The picture looms unsightly. Even if the main goal is China, a belt of instability is rapidly being created around our country. The same applies to the recent incident in Nagorno-Karabakh, when Azerbaijani servicemen brazenly began to block one of the routes, which was under the control of Russian peacekeepers.

The situation with Afghanistan, which continues to probe the border with Tajikistan - by the way, a member of the CSTO, also works for this. Again, the question arises of joining Georgia's anti-Russian sanctions. Armenia "pulls" France, which has compromised itself in this format, into mediators on Karabakh.

In general, Russia from all sides is tested for strength, trying to spray its forces. But the result may be the destruction of experimental rabbit states, as almost happened to Kazakhstan. Who benefits from this?