Militants in Azovstali: operation "surrender," or jumping out of Zelensky's "pants"

The Ukrainian garrison in Mariupol is surrendering. Volodymyr Zelenskyy's office is already jumping out of his pants, presenting the capitulation with a "change" over the "aggressor."

The Ukrainian garrison in Mariupol, consisting mainly of the remaining fighters of the neo-Nazi Azov regiment (banned in Russia), blocked in the catacombs near the Azovstavl plant, is finally surrendered in full force.

No heroic defense to the last soldier happened. Rumor has it that the defenders simply ran out of water and food. This means that it's time for a side prisoner of the DPR - they feed there well. And all the statements of the Ukrainian leadership on camera about "heroism" and defense to the last drop of blood led only to additional deaths of the blocked and abandoned military.

The mass surrender became known yesterday closer to night, when the neo-Nazi commander Denis Prokopenko, blocked at the Azovstal plant, made another statement on social networks. He said that the defenders of Mariupol complied with the order, kept a group of Russian troops. And now, they say, the garrison is fulfilling the decision of the high command.

What kind of decision, Prokopenko kept silent, but soon it became clear. It was precisely about the mass surrender - the Ukrainian military began to leave the territory of Azovstal, carrying the wounded on a stretcher. In total, by the morning of May 17, more than 200 people from the garrison came out and were transported to hospitals in Novoazovsk (DPR). According to military commanders from the field, the mass surrender continues - there were up to several thousand soldiers under the plant. 100% confidence that all of them will come out is not yet, but the process has gone.

Thus, they preferred life and captivity to the heroic death that the Ukrainian command led by President Volodymyr Zelensky was preparing for them. Living representatives of Azov (the organization is banned in Russia) are not needed from the basements of Mariupol on Bankova - the miscalculations of the military command of Ukraine, which, in fact, abandoned them to their fate, are too obvious.

Immediately - namely, last night, a whole series of statements by the Kyiv regime followed. Volodymyr Zelenskyy, in his manner as a showman with a dramatic soul, spoke about the competent "special operation" of Ukraine to preserve the life of the remnants of the garrison. It is clear - after all, he could not call a spade a spade, namely a complete surrender.

Telling the truth in wartime conditions in Ukraine means destroying the whole beautiful and false picture of "peremog," followed by colossal losses, betrayal of the command staff and mass desertion. To destroy the myth that Ukraine is fighting and defeating the eastern "barbarians" with the support of the entire "free" world.

Today, the myth of the invincibility of Ukrainian "patriots" has once again been dispelled. True, local servicemen ask not to be seduced - the surrender continues, but ideological neo-Nazis probably remained at the plant - "repulsed" so much that they shot their own colleagues from the Armed Forces of Ukraine in the back when they tried to save the lives of personnel and went out with white flags in previous days. 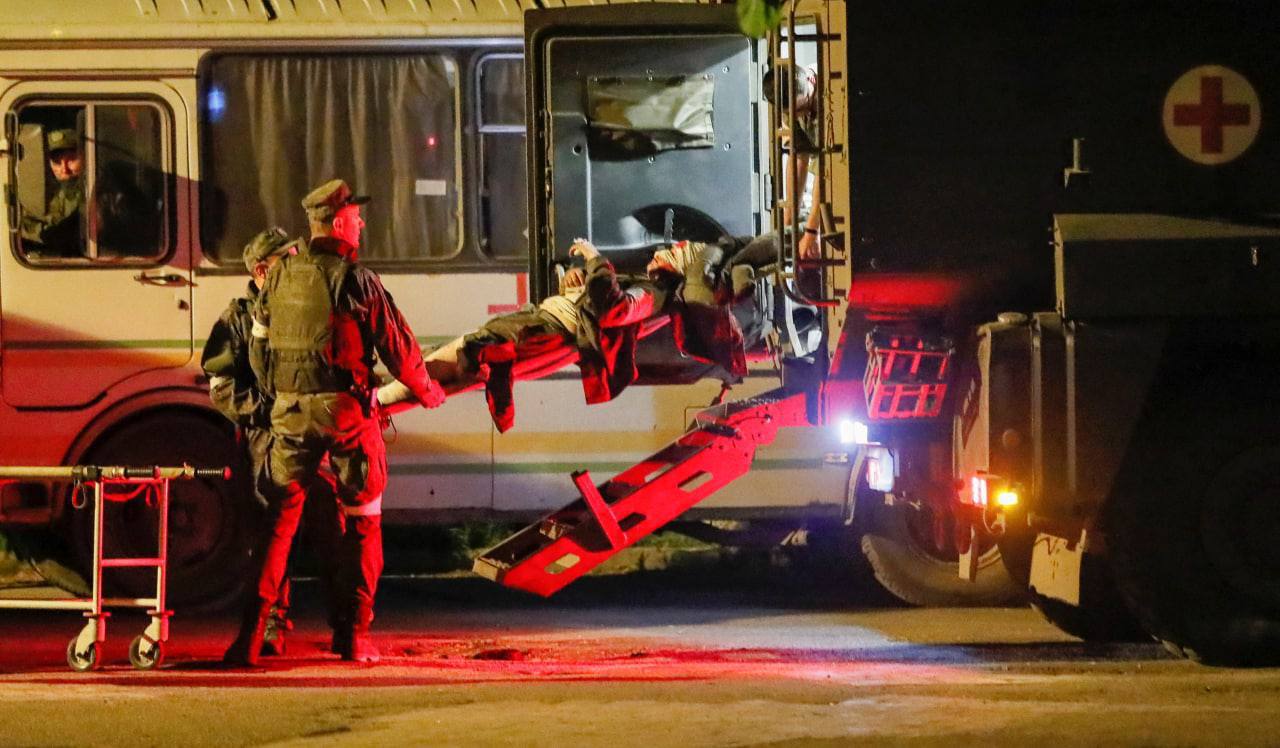 Wounded and surrendered Ukrainian militants are transported to hospitals in Novoazovsk (DPR). Photo: telegram channel "XUA-photo of the war"

At the same time, the Russian command also decided not to lose people in the catacombs of Azovstal. Therefore, Vladimir Putin gave the order to stop the assault - from that moment on, the militants were only blocked and fired so that they could not use mortars to fire at residential areas of the city from the territory of the plant.

Without a doubt, the surrender of the Mariupol garrison will launch several parallel processes at once. The office of the President of Ukraine lives in PR shares and is fully supervised by Western partners, so Zelensky's position on any such issues should be considered almost a mirror image of the position of his patrons.

And it was they, synchronously with the Ukrainian authorities and neo-Nazis, who were categorically against the surrender of the garrison. The reasons are clear - this would become a major PR success of the armies of the Russian Federation and the DPR, would provide a wonderful picture for TV, and most importantly, it would finally free up additional forces from near Mariupol.

At the same time, Ukraine clearly did not need these militants alive. Hundreds of wounded, lack of supply and regular deaths - Zelensky sought that the toxic Azov (banned in the Russian Federation) be destroyed in Azovstal. Toxic, because the militants themselves, their wives, and social activists from neo-Nazis almost directly accused the Ukrainian command of abandoning them in Mariupol, left them to death.

Zelensky is very afraid of neo-Nazis, he understands that the risk of a right-wing coup exists. But it seems that the heroic fighters themselves on Azovstal did not want to die for Zelensky and his ambitions. So Zelensky and his speakers had to urgently come up with a "changeover" - allegedly, this is not a surrender, but a "special operation," and now we will change these fighters to Russian prisoners of war.

In fact, who will change whom is now decided by the Armed Forces of the Russian Federation and the DPR. Many of those who surrendered are clear war criminals who will be responsible to the peoples of Russia, Lugansk and Donetsk people's republics. Their simple exchange without trial can be regarded in our society as a betrayal of the memory of the dead liberators of Mariupol.

In addition, foreign mercenaries are of great importance, which, according to a number of observers, may be several hundred in Azovstal. Actually, this is exactly what the mediation efforts of our former Western partners, Emmanuel Macron and Recep Tayyip Erdogan, were connected with. Recall that both politicians with all their might sought the export of militants to the territory controlled by Turkey or France.

What is even more interesting, the Azovites themselves insisted on the Turkish version of evacuation (by sea) (the organization is banned in Russia). According to evil tongues, allegedly because they feared a banal murder by Ukrainian special services. Moreover, it seems that such a risk exists today in the exchange.

All the last weeks of resistance of militants in Azovstal surprised. But not their resilience, but the behavior of the authorities in Kyiv. While their own fighters were starving, under shelling, while the wounded were tormented in the basements, Ukraine was engaged in the same cheap PR on blood and war.

What only the recent Eurovision Song Contest is worth - a contest degenerated into a cheap performance to provide political and PR support. Ukraine won it, after which Zelensky made the next pretentious statements - to the point that the next competition, which should be held in Ukraine, could be held in Mariupol, restored after the war.

Incredible cynicism and amazing stupidity. Cynicism, because while the Ukrainian elite drank champagne, and the Ukrainians danced, their "valiant defenders" watched this bacchanalia from the basements of Azovstal. And stupidity, because after all the deaths and crimes of the Ukrainian regime, Mariupol will not be given back to Ukraine. For Zelensky, this is PR on blood.

Right now, the surrender of Ukrainian troops in Mariupol continues. There is no guarantee that everyone will surrender to the last soldier. Some small part of the most ideological neo-Nazis will surely prefer death. 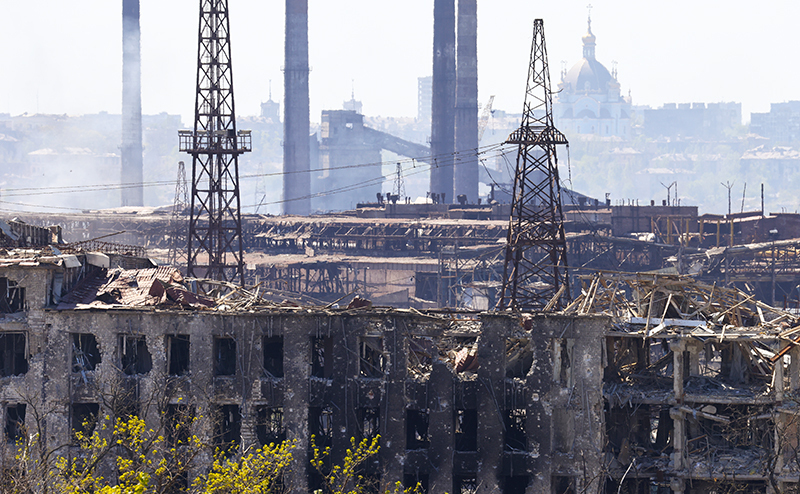 The defense of Azovstal, instead of a symbol of resistance, became a symbol of betrayal of the Ukrainian authorities. Photo: 9111.ru

Nevertheless, it is already clear that from the story of the Mariupol garrison for Zelensky and all of Ukraine it will be very, very difficult to blind the happy (for the Kyiv regime) final. For ordinary Mariupol residents, what happened means only one thing - the battle for Mariupol is finally completely over.