Anticipating the imminent end of its regime, the Ukrainian leadership does not shy away from the dirtiest methods to draw its "partners" into a military confrontation with Russia. In the West, they are in no hurry to substitute - there are no fools.

According to the correspondent of The Moscow Post, Ukraine continues to blackmail Russia and the whole world with the non-existent threat of an atomic "catastrophe" in Zaporozhye. On the eve of the special operation, Russian forces operated in the Energodar area, not so far from the Zaporizhzhya NPP. As a result of the opposition of the Ukrainian side, the training center near the NPP was damaged and caught fire. However, the station itself was not damaged.

The Ukrainian leadership, rapidly losing signs of adequacy, hastened to declare that the plant itself was damaged, and that the world was on the verge of an atomic disaster. So NATO must urgently close the Ukrainian sky from Russian military aircraft. The fact that such a move could lead to a clash between the Russian Federation and NATO, Zelensky, apparently, is not bothered.

Why they need a no-fly zone is understandable. During the special operation, Ukrainian forces, as well as radical elements who joined them, suffer a crushing defeat. To extend the agony of the Kiev regime, Zelensky is ready to threaten the world with an atomic disaster.

In addition, the blackmail of Zelensky and his team continues regarding the transit of Russian gas through the Ukrainian gas transportation system to European consumers. On March 3, the Ukrainian government imposed a ban on the withdrawal of any volume of gas from the country, including those reserves that are in underground storage in customs storage.

And this is also just a move from despair, a move that is designed to put pressure on Europeans themselves. As experts predicted, Western countries only pushed Kiev to confrontation with Moscow, but they themselves are categorically not going to participate in this by their military means. Ukraine was simply abandoned, using it as a ram for Russia.

However, Europeans love comfort, as the Kiev regime expects. A few days without gas, frosts - and then, perhaps, the Europeans will come up with something else to put pressure on Russia. But after all, it is already clear that almost all means of pressure have already been used.

Sanctions have created serious problems for the Russian economy. At the same time, they have not changed and will not be able to change the position of Russia, as this has not been possible over the years since the coup in Ukraine. Moreover, they hurt the Western countries themselves. While real anti-Russian hysteria continues in the media, experts have long and unequivocally concluded that it is simply impossible to isolate and not notice such a huge and important country as Russia.

And now US Secretary of State Victoria Nuland has made a statement: allegedly, new Western sanctions against Moscow will be lifted if the Russian Federation terminates a special military operation. Her statement made a splash even at the most notorious skeptics shouting "everything is gone" due to new restrictions.

In the West, they understand the inevitability of the end of the Zelensky regime, they realize that their criminal policy in Ukraine has suffered a complete fiasco. And after denial and anger, in just one week, they went to the stage of "bargaining." But too late - it is clear that the military-political leadership will not make such a compromise. As they say, you were warned - it's too late to drink borjomi. 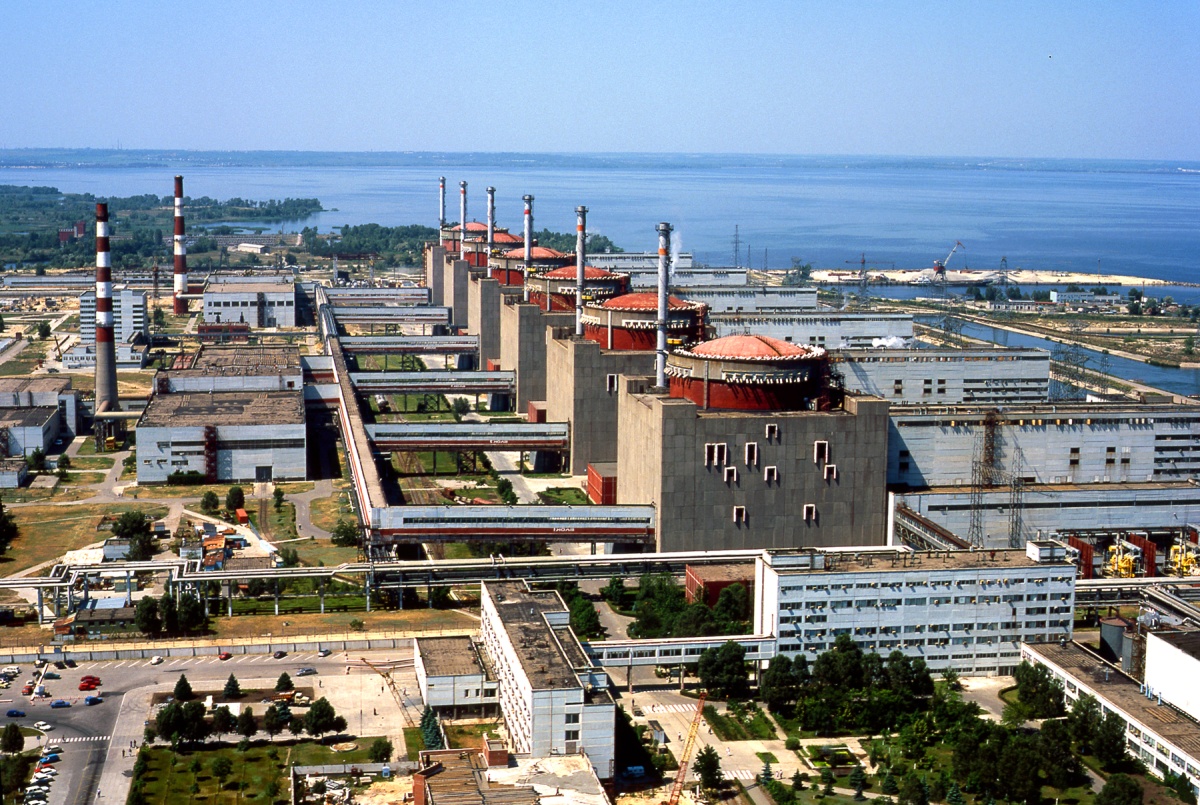 Zaporizhzhya NPP is the largest in Europe, its hulls withstand the direct hit of aircraft bombs. Who is Zelensky trying to deceive? Photo: www.atomic-energy.ru

Meanwhile, the special operation in Ukraine is becoming more intense. Yesterday, Vladimir Putin said that it is in clear accordance with the schedule, all its goals will be fulfilled. APU and the National Baths are rapidly losing combat effectiveness. Apparently, therefore, such provocations from the NPP appear - apparently, Ukrainians themselves tried to hit it.

Yesterday, Vladimir Putin touched on another important problem - how Ukrainian nationalists are broader - the Ukrainian leadership is hiding behind peaceful people, using them as human shields. Heavy equipment is located in the courtyards of residential buildings, in the same Mariupol, representatives of the national battalions fire from the roofs of social facilities and residential buildings. Everything in order to call back the fire of the Russian Federation and receive casualties among the civilian population.

A similar tactic was used by the Nazis during World War II. Well, apparently, they don't care about cities and infrastructure - it's clear that they will not have a place in the new, denazified Ukraine.

It seems very much that all this is done directly with the submission of American and British friends of Kiev. Realizing that Ukraine has no chance, they are trying to create as many problems for the Russian contingent as possible, even if with large casualties among the Armed Forces of Ukraine.

It's time to learn the word "surrender"

At the same time, an unprecedented dirty information campaign is being conducted against the Russian Federation. And not just dirty - criminal. Ukraine and its curators are struggling to undermine the unity of the Russian Federation from the inside, provoke public discontent, and incite unrest.

However, from what the Kiev authorities are doing in shock, it seems, even the Americans themselves. On the eve of one of the most influential newspapers in the world, The Washington Post released a material entitled: "The bloody online campaign launched by the Ukrainian government violates the Geneva conventions."

According to representatives of the American press, this campaign violates world law. On Telegram, Twitter and YouTube, the Ministry of Internal Affairs of Ukraine has been posting a constant stream of extremely graphic images with torn bodies since Sunday, demonstrating the horrors of the hostilities, inviting Russians to study them, allegedly there are no close people among them.

In a compartment with the tactic of placing heavy weapons in the yards of residential buildings, at schools and kindergartens, a similar practice is a new stage of cynicism and war crimes of the Kiev authorities. However, no one is surprised at her - especially if you look directly at President Volodymyr Zelensky himself and his entourage.

Yesterday, Zelensky gave interviews to Western media. And it is not clear where he is - he has not appeared on Kiev streets for almost a week. According to rumors, now he is either in Lviv or in Poland. Be that as it may, it was even purely visual that Zelensky was in inadequate condition. It is likely - under some prohibited substances, or just drunk. You don't even know what to say. What decisions can be made in this state?

Earlier, Vladimir Putin already made it clear that it would be possible to negotiate with this group of people, probably under prohibited substances. And with drunken, alcoholics, Putin does not communicate at all. In view of this, Zelensky's proposal to meet personally with the Russian leader looks like another inadequate step. 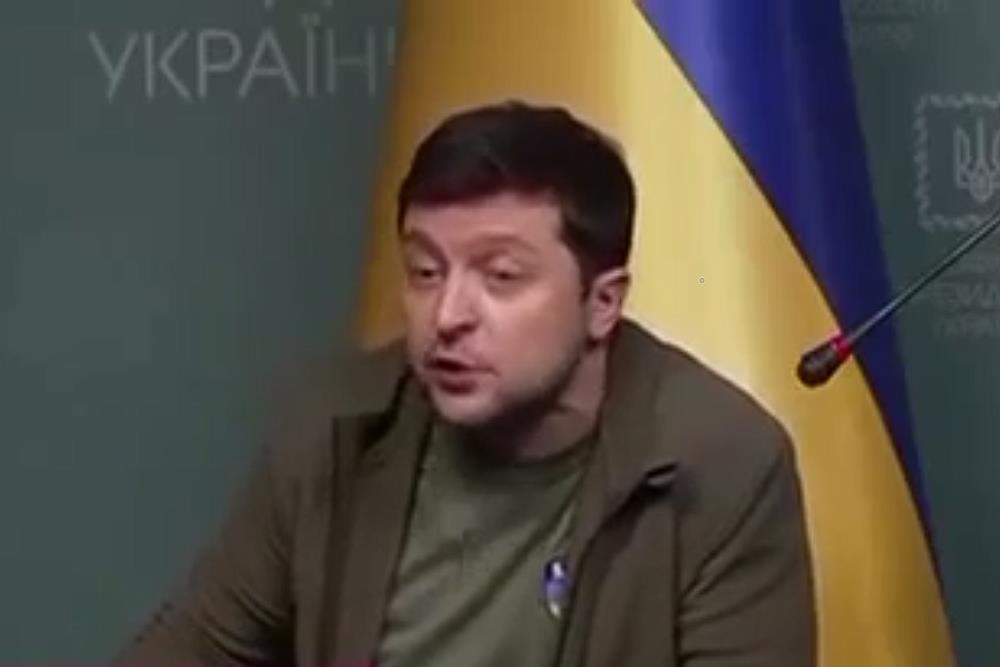 Zelensky seems to have been nervous. Or overstepped? Screenshot from the video posted on the YouTube channel "Politics Today - Russia, USA, Ukraine"

Not to mention the demands that Ukraine, which suffers complete defeat, put forward to Russia in the negotiations, at least publicly: the transfer of Crimea, the cessation of support for Donbass, etc. Yesterday, Zelensky said that Russia should teach the words indemnity and reparation. And later - again tried to achieve some kind of negotiations personally with Putin.

Nevertheless, the bipolarity of the Ukrainian leader is incomprehensible. Everything according to Bulgakov "Someone was fussing, shouting that it was necessary now, immediately, without leaving the place, to draw up some kind of collective telegram and immediately send it. Someone to call Perelygino. "

However, Zelensky himself will have to teach the word "surrender." And the best thing about what is happening with Zelensky and his regime can be said by Ukrainians themselves. Here is what the opposition Ukrainian politician, deputy of the Verkhovna Rada from the party "Opposition Platform - For Life" Ilya Kiva thinks about this:

"Zelensky's statement that he made about a possible disaster at the Zaporizhzhya nuclear power plant is just blackmail, which is dealt with by a distraught person who is facing imminent death. He lost contact with reality, "Kiva said in his telegram channel. "Now that they (the Ukrainian authorities - ed.) Understand the outcome, animal fear forces this nonsense to bear," the politician said.