Why the refusal to impose values ​ ​ and change political regimes in the post-Soviet space brings Russia more dividends than thoughtless and cynical ideological "exports."

According to the correspondent of The Moscow Post, the celebrations on the occasion of Independence Day of the Republic of Kyrgyzstan ended in the middle of the night. The holiday was celebrated on a scale, but without undue fanfare, and the occasion itself gave new food for thinking about what is happening in the post-Soviet space in the context of world geopolitical processes. And specifically - in Central Asia.

What are these processes? The first and main thing is the final departure from the bipolar world, the formation of new centers of power, deep social, economic, technological changes that are reflected in politics.

In both structures, Russia plays, if not the key, the role of the first among equals. The Moscow Post previously wrote about how our geopolitical competitors are trying to quarrel the member countries of these organizations among themselves. Their (Europe and the USA) motives are understandable. Nobody needs competitors.

Here, on the concrete example of Kyrgyzstan, we draw the reader's attention to how Russia interacts with the former republics of the Soviet Union. More broadly, to those with whom our country is firmly connected politically, economically and through security in support of real independence and subjectivity.

Russia, of course, is making efforts to ensure that neighboring states, and even more so allies and partners in working in supranational structures, act, if not in a rope, then, at least, without contradicting our own, Russian national interests.

However, such a policy lacks the so-called value approach. More precisely, there are values, only Russia does not seek to impose them together with the "correct" political system. For this, Russia is often reproached for supporting dictatorial regimes. And who reproaches the United States, whose main ally in the Middle East is Saudi Arabia, where women only a few years ago received the right to drive independently?

Theorists of international relations call such a pragmatic approach - a departure from value-oriented politics. In fact, it never existed at all. It exists only as an ideologue for a narrow layer of manipulators. This is an artificial construct to justify interference in the domestic policies of other states.

In fact, such a policy has suffered a complete fiasco, and there is no question of real protection of democracy and human rights. It's not just the disaster in Afghanistan. What is only one Ukraine that has reached the closure of large media out of court. At least someone in the USA stuttered about this? What about values?

Returning to Kyrgyzstan, the day before, the President of Russia congratulated his colleague Sadyr Zhaparov on the 30th anniversary of independence. The text of congratulations is published on the Kremlin website. As if in response to this, Mr. Zhaparov himself in an interview with the Turkish press named Russia among the strongest states in the world.

It would seem that this is an ordinary curtsy. However, both Zhaparov and other members of the elite of Kyrgyzstan in Russia should be grateful. In the situation of the acute domestic political crisis of 2019-2020, the Russian Federation did not interfere in the processes underway there. She did not, although she could - she had a request from the past head of state Almazbek Atambayev, whose people then held many high posts in the government and law enforcement agencies of the country

Atambayev became the first president of Kyrgyzstan to voluntarily resign from his post. But leaving, I was not going to leave. His nominee Sooronbay Jeenbekov, formerly the prime minister of Kyrgyzstan, won the election, and then began purging the ranks from the people of his benefactor.

We will not be deployed to remind you how this conflict went. The main thing that everyone remembered was the assault on Atambayev's residence, which was considered loyal to Russia and advocated deepening the integration of our countries. It would seem that he is the preferred option, like Jeenbekov, who followed in the same political channel. 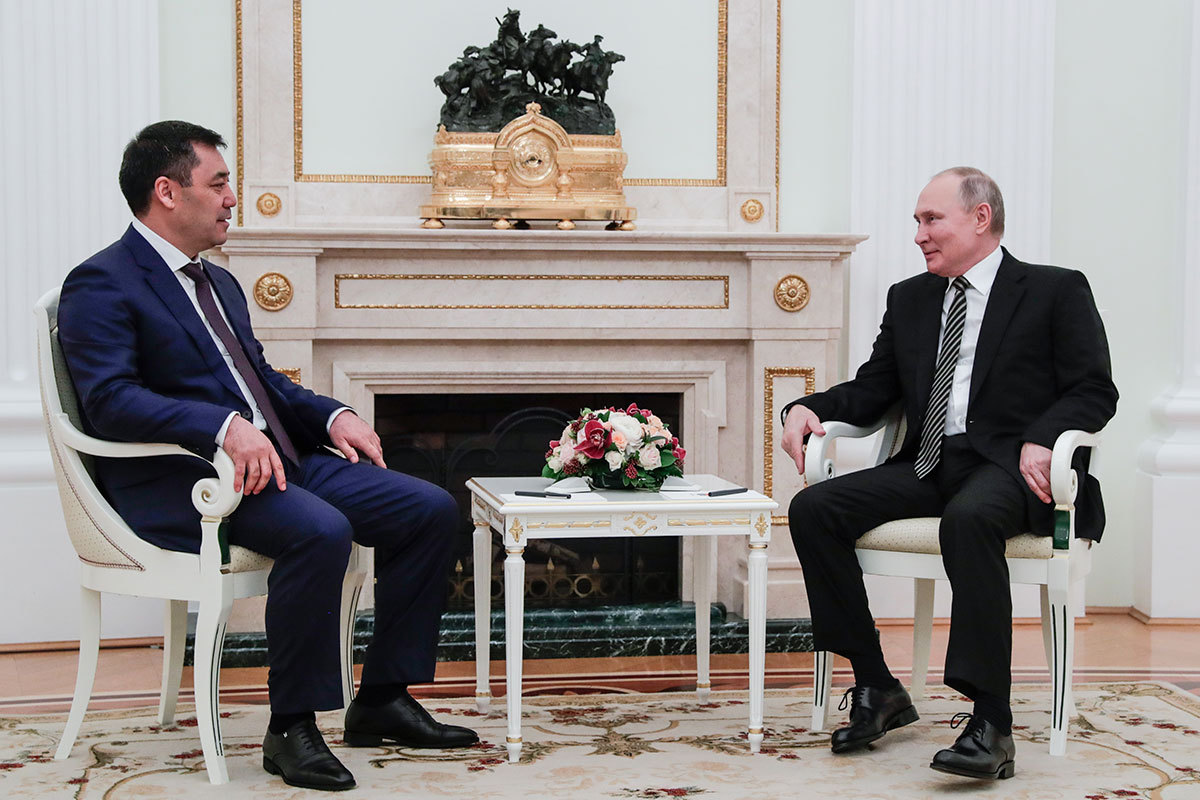 Sadyr Zhaparov at a meeting with Vladimir Putin in the Kremlin

However, the fact that Russia refused real interference in the affairs of Kyrgyzstan gave the Kyrgyz to independently resolve the conflict. The result - Atambayev lost, and then, less than a year later, lost and betrayed him Jeenbekov. And another person entered the arena - the current head of state Sadyr Zhaparov. He came to power, one might say, as a result of the revolution - but it came from the inside, and not from the outside. And it was not fueled like the same revolution in Ukraine.

What became of Ukraine after - also no one really needs to explain. Today it is the poorest and most corrupt state in Europe, and the standard of living of Yanukovych's time can only be dreamed of. And this is not to mention subjectivity (its absence).

And what would have happened if Russia, in a situation of conflict with Atambayev, and then, already during the revolution in October 2020, would have relied on a specific force, hiding behind value motives? Most likely, she would lose on both fronts.

Then, in the fall of 2020, events were rapidly developing in Belarus. Russia provided moral support to Alexander Lukashenko, but all the rumors that she sent her special forces to the country, repressed the Belarusian opposition or was preparing to seize power in the republic turned out to be complete nonsense.

"We, as in the case of Belarus, in no way want to interfere in these intra-Kirgiz processes, just as in the case of Belarus. Here I want to draw your attention to the president's words that there are many plans for cooperation between Russia and Kyrgyzstan, between Russia and Belarus. And Russia will continue this cooperation, because it is necessary for the peoples of the two countries, and will offer the necessary assistance to both Kyrgyzstan and Belarus. We are talking about the peoples of the countries, "said then the press secretary of the President of Russia Dmitry Peskov. His words are quoted by RIA Novosti.

Refusing to impose values ​ ​ and aspirations to change the political system from the outside is one of the main competitive advantages of Russia, as a great power, when interacting with other states. Even on the part of the same USA, such a practice can be only formal in nature with extremely cynical real motives. The consequences of this approach are also quite real.

In any case, the so-called "Big Game" of the great powers continues. Belarusian events clearly showed that Russia is not going to lose its traditional spheres of influence. In the same vein, one can also consider the decision of the Cabinet of Ministers of the Russian Federation of 2020 on the simplification of the visa regime for foreigners, which was perceived by many experts as a certain favor, directed primarily to our CIS neighbors.

The southern direction remained as relevant as the western. And in connection with the events in Afghanistan, it became even more important. Separately, we mention another supranational organization - the Eurasian Economic Union (EAEU), overseen by Moscow.

Kyrgyzstan has already entered there. Other permanent members of the EAEU, besides the Russian Federation, are Armenia and Kazakhstan. Armenia, Kazakhstan and Kyrgyzstan have already joined the Eurasian Economic Union (EAEU) overseen by Moscow. Uzbekistan's permanent membership in the EAEU is a matter of the near future.

The assistance provided by Russia to the southern republics of the CIS during the pandemic has greatly raised Moscow's actions at the grassroots, national level. And the refusal to impose their candidates and explicit support for certain political processes in these countries already kept these actions at a high level.

Recall that at the moment in Russia there is most of the almost million army of Kyrgyz labor migrants. During the pandemic, only 20 thousand of them returned to their homeland, the bulk remained in place. By working in Russia, they ensure the survival of their families in their homeland.

From Moscow there is assistance through official channels. About this writes Business Online. In 2009, Russia provided $150 million in free financial assistance to Kyrgyzstan. And over the next 10 years, Bishkek was given another $700 million in humanitarian assistance, financing various projects within the framework of the EAEU and direct investment in the economy of this country. 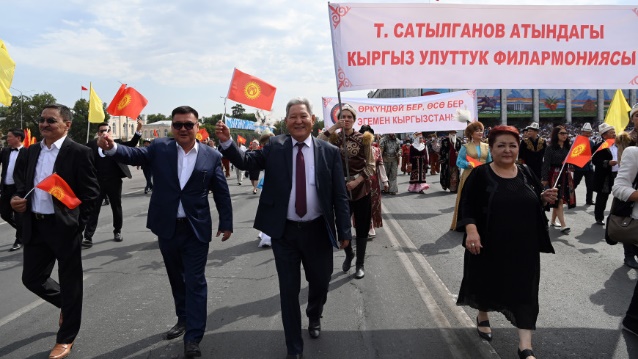 Russia issues Kyrgyzstan and loans on preferential terms. A lot of people don't like it. However, the real consequences are that relations between Moscow and Bishkek have never been at such a high level as they are now. The Bible says: "In this way every tree is good and good, and a thin tree is thin." ​ - Matthew 7:17. Judge, as they say, yourself.