The United States continues to multiply nuclear risks for the whole world, while in Washington itself there is an amazing irresponsibility, bordering on almost madness.

The United States of America continues to operate without regard to the security and interests of other states, which leads to increased nuclear risks. This was announced on Tuesday, August 16, by the Russian Embassy in Washington.

This statement was a response to a number of recent steps of the White House, including the next trip of the American delegation to Taiwan, as well as unfounded accusations and attacks on the Russian Federation, whose actions, according to Washington, do not correspond to the status of a nuclear power, reports The Moscow Post.

At the same time, the actions of the American administration of Joe Biden both in recent months and in recent days make you wonder how much they generally report their actions there.

Survey of the I & I/TIPP Sociological Center conducted online from August 2 to 4 In the United States, 59% are concerned about the mental health of President Joe Biden. Of those, 36% are "very concerned" and 23% are "somewhat concerned."

That is, more than half of those surveyed in a representative sample of the United States reported that they were concerned about the mental health of their leader - believed to be the most powerful and influential politician on earth, the commander-in-chief of the strongest (as considered) army in the world, who has direct access to the so-called nuclear suitcase.

Would you trust the likes of your deeply elderly grandfather with dementia? You might not have done that even if he hadn't greeted the air and been lost in space like Biden. But that's exactly what Americans are doing.

At the same time, the press secretary of the White House has repeatedly hinted that her chief is going to run for a new term in 2024. It seems that even the president's inner circle does not rejoice in such a prospect.

Of course, there is also Vice President Camilla Harris (who even Democrats consider an outspoken stupid), there are other establishment representatives who actually fill the White House, but it is on the capacity of the first person that the adoption of the most important decisions depends.

At the same time, we did not start with nuclear risks in vain. According to military analyst, former Marine and Pentagon official Scott Ritter, the current administration in the White House is the most irresponsible in the history of the United States.

This is especially evident against the background of recent US actions towards Taiwan, where a new world war threatens to begin at all. Senators and House members arrived in Taipei last weekend - a visit less than two weeks after Nancy Pelosi visited the island.

As in the first and second cases, China reacted to this by conducting large-scale exercises. Beijing imposed sanctions on Ms. Pelosi and suspended cooperation with Washington on a number of fronts. However, this did not stop the American side.

They said that they would continue to visit Taiwan. "Members of the U.S. Congress have been making visits to Taiwan for decades, and they will continue to do so," State Department spokesman Ned Price said. According to him, this does not contradict Washington's commitment to the "one China" policy.

Does it smell like schizophrenia - the White House is absolutely openly supporting the government in Taiwan, which is clearly separatist towards Beijing. At the same time, the reaction of Beijing itself was a disappointment for many who expected that it would act more harshly - up to the declaration of war by the United States.

In Beijing, quite cold-blooded and responsible politicians are sitting who do not want to succumb to Washington's provocations. Soon there will be elections in Taipei, and the pro-China party has every opportunity to prevail and deploy the island's policy towards mainland China.

Washington's attempts to sit on two chairs and rock the situation look all the more dangerous. However, even pro-American experts admit that the States are playing with fire.

I.e. now it became obvious that initially Beijing was bluffing when it hinted at a possible imminent power response: It turns out that Xi Jinping is calmly waiting for a new election cycle and wants to get Taipei "warm" and without a single shot. But what happens if that plan fails - are both sides ready to raise rates? 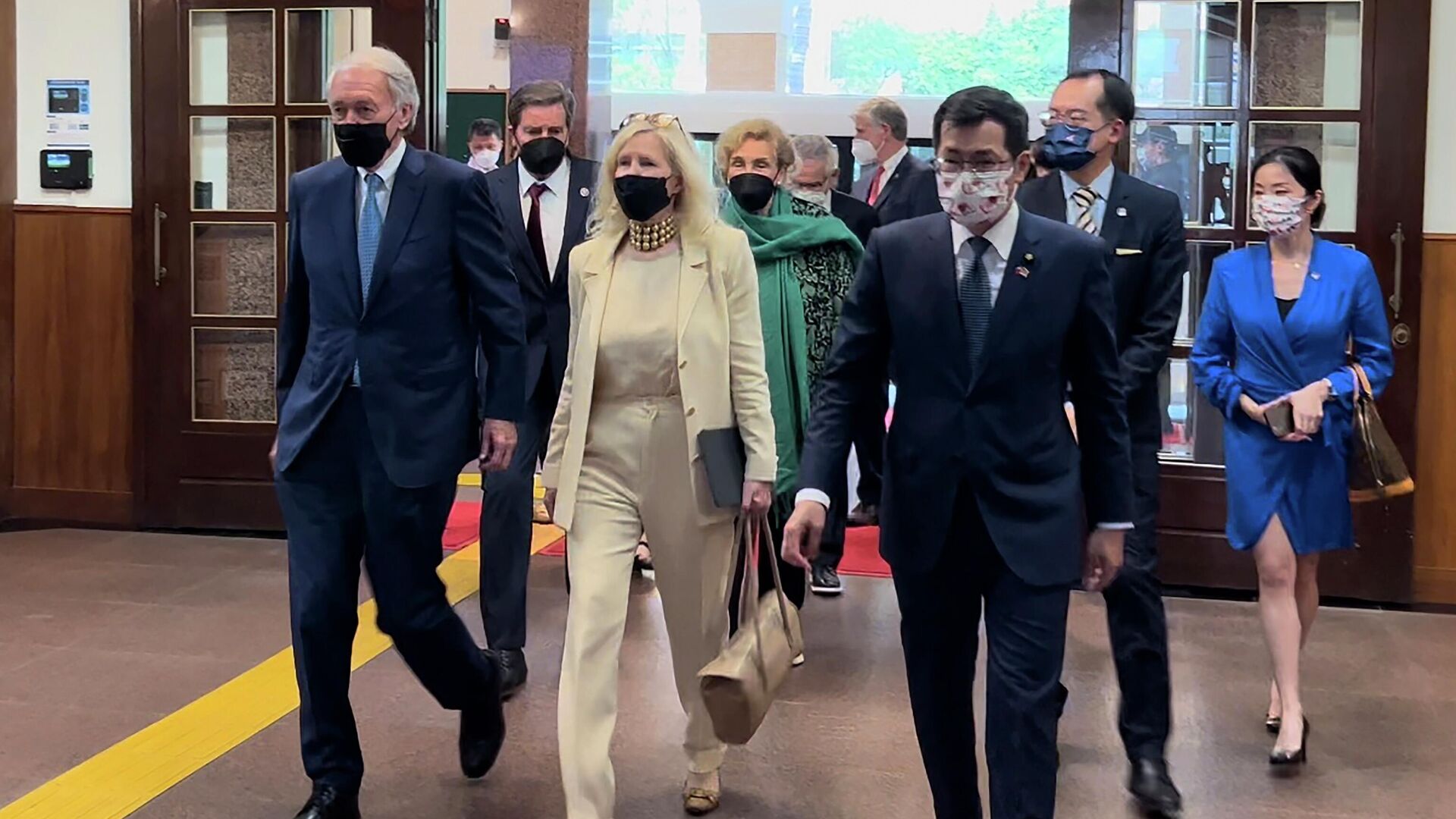 American congressmen in Taipei are an indicator of the utter geopolitical irresponsibility of the current administration in the United States. Photo: AP Photo/Johnson Lai

There is no obvious answer, but the US is acting as if it is ready. There is another opinion: Washington should have responded to China's growing military activity, but did not do so, which many in the States themselves regarded as weakness. According to the author of the American edition of The American Conservative Patrick Buchanan, the same circumstance indicates the inevitable continuation of the confrontation around the island.

START is far away

At the same time, the United States is playing a dangerous game on the other "flank" - Ukrainian. While Russia continues a special military operation to protect Donbass, Washington is pumping weapons and ammunition in Kyiv, as well as providing political cover for openly terrorist actions - shelling Europe's largest Zaporizhzhya nuclear power plant.

In Kyiv, they say that the shelling of the station is carried out by Russia. At the same time, all parties confirm that there are Russian military at the station, which ensure security - it turns out, according to the Kyiv authorities and their allies in the White House, Russia is shelling itself? Similarly, for eight years they allegedly fired at themselves by the DPR and LPR.

Such behavior with complete indulgence for Kyiv is irresponsible behavior that does not correspond to the status of a nuclear power.

On the eve of the Deputy Secretary of State for Arms Control Bonnie Jenkins said that the United States will not use nuclear weapons or threaten their use to non-nuclear countries that are members of the Treaty on the Non-Proliferation of Nuclear Weapons (NPT). However, in fact, Washington is doing everything to level any agreements in this direction.

It is the United States that undermines the real work on non-proliferation and maintaining dialogue between the leading military powers in this direction.

Earlier in August, Russia notified the United States of the temporary withdrawal of its facilities from inspections under the Strategic Arms Reduction Treaty (START) due to the policy of American colleagues. This was reported on the website of the Ministry of Foreign Affairs.

"The Russian Federation is now forced to resort to this measure due to Washington's stubborn desire to explicitly achieve a restart of inspection activities on conditions that do not take into account the existing realities, create unilateral advantages for the United States and actually deprive Moscow of the right to carry out inspections on American territory", the statement said. 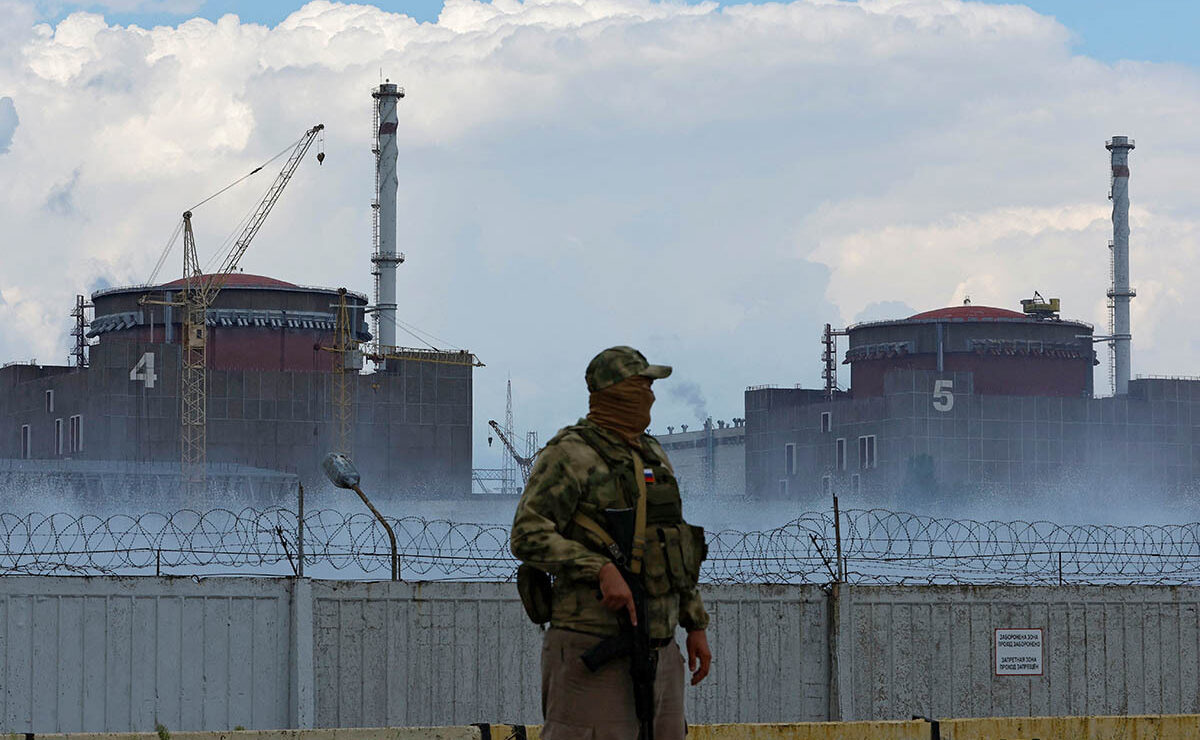 Ukraine continues the shelling of the Zaporizhzhya nuclear power plant with the complete connivance of its curators in Washington. Photo: yakutsk.ru

Recall that the SNV-3 expires in 2026. Moscow and Washington began agreeing on the parameters of the new treaty, but interrupted the dialogue after the start of a special operation in Ukraine.

As stated in the State Department, the United States is ready to consider the possibility of a new round of strategic dialogue with Russia, but wants to see evidence of its bona fide approach. How the Russian Federation should assess the "good faith," and in the week - the absolute irresponsibility of the States themselves, the White House did not specify.