Integration against the background of external threat

Despite all attempts to hammer a wedge between Russia and Belarus, the Union State gets stronger - especially against the background of external military threat.

Last Monday in Minsk in a format "in private" there took place negotiations by the President of Russia and Belarus of Vladimir Putin and Alexander Lukashenko. Against the background of the taking place special military operation on protection of Donbass safety of the Union State though initially Belarusian leader designated by a priority discussion of economy became a key subject for discussion.

Details – in material of the correspondent of The Moscow Post.

Besides safety of questions really was enough. However in the context of the going opposition of Russia and the countries of the so-called collective West in Ukraine the visit of the Russian leader to Minsk caused acute neurotic reactions in our former western partners.

Vladimir Putin arrived to Minsk for the first time for the last three years. Besides safety, issues of development of economy, integration of two countries, implementation of the programs provided by road maps - plans for rapprochement and standardization of the legislation, including in trade and tax spheres, development of industrial potential were discussed.

The visit of the President of Russia to Belarus looked incredibly intriguingly for allies, and threateningly for the general enemies of our states. In the West, in NATO lifted nearly a hysterics, trying to present a main objective of negotiations of two leaders coordination of common efforts in the military sphere for possible offensive at Kiev of the joint Regional grouping. Today she totals 79 thousand people. A basis - the Belarusian army, 70 thousand people. 9 thousand more are Armed Forces of Russia.

The last is the main military tool of the Union State in ensuring defense. Components of the contingent began to function in 2000. However forces developed only in 2022 against the background of enormous threat of external invasion into Belarus from the western countries.

In the European capitals, and, especially, over the ocean, don't hide for a long time the desire to replace political regimes in our countries. Russia not to reach by him, and here near borders of Belarus, in Poland, the powerful shock fist of NATO which threatens the existence of the independent state is created.

Literally some days before negotiations large-scale unplanned exercise of military of Belarus on reflection of aggression of the probable opponent ended. In it some experts tried to see almost preparation for the entry of Minsk in the military conflict in Ukraine.

At the same time the press secretary of the Russian President Dmitry Peskov noted that the Russian Federation and Belarus promptly develop the purposes of joint group of troops, however the assumptions that Moscow tries to incline Minsk to participation in military operations, are groundless.

For all 2022 of it didn't occur, and strengthening of measures of military reaction has defensive character. Especially, considering statements of so-called non-systemic opposition of two countries - prigrety in the west of mankurts and compradors who without hesitating at all declare desire to be passed across Minsk and Moscow on American Abramsakh.

However, some pluralism of opinions and forecasts in a camp of our former western partners after all remains. For example, surprisingly, military intelligence of Ukraine didn't see" readiness of VS of Russia for "invasion" from Belarus.

However the Ukrainian Minister of Defence Aleksei Reznikov declared determination to divide "a victory over Russia" with fifty partner countries. In the same time the head of SVR of Russia Sergei Naryshkin once again declared presence at Poland of plans for occupation and absorption of the western regions "Independent".

"People will estimate the made decisions"

In general, in a camp of our opponents negotiations of leaders of the Union State throw out the whole palette of emotions, including also the most real hysterics. For Alexander Lukashenko, besides questions of safety, economic support from Moscow in the conditions of unprecedented sanctions pressure became the major subject.

"They can (Russia) without us survive? Can. And we without them? Isn't present", - Alexander Grigoryevich at a final press conference concluded. And, unfortunately, it is valid from Moscow not to do Minsk without financial, technological and other aid today.

Even before negotiations the Belarusian leader recognized also some problems which probably during the meeting managed to be overcome. It was supposed that difficulties of implementation of 28 allied programs will be discussed.

As a result, Russia will allocate 105 billion rubles to Belarus for the development of the engineering industry. According to Vladimir Putin, additional funding was transferred to an ally to promote joint projects for import substitution in mechanical engineering, machine tools and electronics.

The Russian leader stressed that these projects are beneficial to both parties, that Russia itself needs them to fill the market after the departure of some foreign companies. Among other things, they discussed issues of the price of Russian gas. They came to a common opinion. Lukashenka called the agreed price "fair." Alexander Lukashenko, in turn, expressed hope that people will appreciate the decisions made by the heads of state. 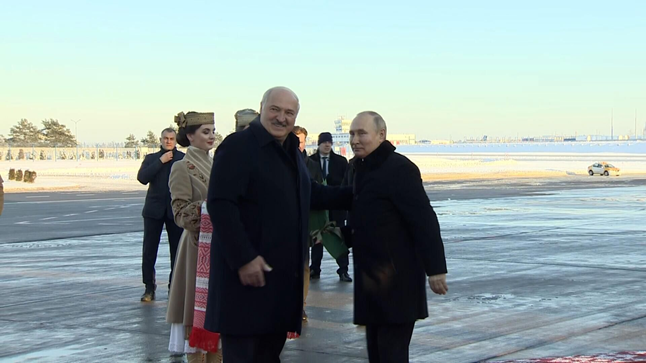 In Minsk, Vladimir Putin was greeted as a native. Photo: RIA Novosti

As a result, the Belarusian leader said: "Strengthening ties between Moscow and Minsk has become a natural response to the changing situation in the world, in which we were constantly checked and tested for strength. I believe that, despite some roughness, we still find effective answers to various challenges and threats. "

Vladimir Putin defined the past meeting as "very effective."