In the name of Boris, or the English prime minister repeated the "feat" of Yeltsin

Boris Johnson's days as prime minister of Britain are numbered, but this does not prevent him from throwing tantrums in the British Parliament.

A new scandal erupted in Britain, which puts an end to the policies of the current Prime Minister Boris Johnson and his team. And the team, as such, was no longer left - yesterday five representatives of his government announced their resignation at once.

What is happening in London, as it will affect the confrontation between Russia and the West - in the material of the London correspondent of The Moscow Post.

The day before, City Minister John Glen, Minister for Schools Robin Walker, Minister for Children and Families Will Queens, Minister for Justice Victoria Atkins and Minister for Agroinnovation and Adaptation to Climate Change Joe Churchill resigned.

In total, in recent weeks, the Johnson government has left about 40 people. Yesterday's resignations began after the authorities asked British Prime Minister Boris Johnson to leave office after the scandal with former British Foreign Minister for European and US Affairs Chris Pincher.

Pincher is the main Tory party organiser in the House of Commons. At a recent party, he went over a little with alcohol, and sexually harassed two of his colleagues. Everything would be fine, for modern British officials this is common. But the situation went public, and Johnson has too many competitors to let go on the brakes.

The problem for Johnson is also that, as the local social activists and journalists found out, it was the current prime minister who promoted Pincher for a long time. Which made people even more outraged - he was well aware of some of his protege's unseemly tendencies, but it didn't bother him. And not just inclinations - previously there was a whole parliamentary investigation into Pincher's harassment.

At the same time, British Prime Minister Boris Johnson himself categorically refused to resign after a corresponding proposal from his colleagues.

At a meeting with associates who wanted to persuade Johnson to resign, he also said that he would not leave his post, as "chaos in the struggle for leadership" in the party would begin. After that, another British minister - for Northern Ireland, Brandon Lewis - resigned.

He stated that the country is in a difficult situation, that it is up to the Prime Minister to lead Britain through difficult times. Also, according to Johnson,

In addition, there was a hint between the lines that his resignation would be very happy in Russia. And that's true. And the reason is more than serious - Johnson is a clear Russophobe and the enemy of our country.

And also - as here after the refusal of the British prime minister not to remember the situation with Boris Yeltsin. In the late 90s, he was called upon to resign almost all the political forces of the country.

This happened against the backdrop of mass impoverishment and the 1998 crisis, when everything was terrible in the economy. It was quite clear that Yeltsin, no matter who treated him, was simply not able to lead the country out of this crisis. However, he stood his ground - he will work until the expiration of constitutional powers. We know the result - in 1999 his state of health became such that he was simply forced to leave.

Boris Johnson does not look like a sick Yeltsin, but he annoys compatriots hardly less. It is with his name that a number of negative processes are associated in Britain itself. As one of the key architects of Brexit, Johnson struggled to quell separatist sentiment in the same Scotland. But as a result of his reign, they again thought about a referendum on leaving the United Kingdom.

But alarm bells have already sounded for Johnson, and more than once. Earlier, he became a defendant in an equally high-profile scandal, when it turned out that during the period of coronavirus restrictions, he had fun with colleagues at parties with alcohol. Then he managed to shift his focus to the Ukrainian crisis - in fact, for him it became a kind of panacea for distracting the British from internal problems.

And today Johnson does not stop playing the Ukrainian card. He is almost the main hawk of the Anglo-Saxon world in the confrontation with Russia. And Ukraine, as an instrument, is played out perfectly by him. It is believed that in March it was Boris Johnson who convinced Ukrainian President Volodymyr Zelensky not to negotiate with Russia in order to stop the conflict.

He instilled in the Ukrainian leader and his Comparador elites that they would resist, that Russia would not be able to successfully complete the operation to defend Donbass thanks to Western support and weapons. He knew he was lying. In the West, many understood this. But many fell under the influence of propaganda, as did millions of Ukrainians who were convinced that Russia was their enemy.

To call Johnson's actions to provoke Zelensky to continue the conflict meanness means not to say anything. At the same time, Britain began preparing Ukrainian soldiers for a forceful sweep of Donbass even before the start of the SVO. And today Britain is among the first lobbyists of the Kyiv regime to provide him with weapons, ammunition, train personnel, coordinate the actions of mercenaries. Not to mention the intelligence that London transfers to Kyiv.

It so happened that Johnson became the most popular politician in Ukraine after Zelensky, losing to only 3%. In Kyiv, croissants are called in honor of him, and in Chernigov they are accepted into the Cossacks under the name of Boris Chuprina.

Of course, Johnson's departure will not end support for the Kyiv regime. But supporters of support for Ukraine will diminish. In addition, something more important will happen: the British establishment will be shown that it will not be possible to completely shift public attention from internal problems to an external agenda.

Despite all the rhetoric, record inflation will not get lower, energy prices will not stop breaking records, and food will not fall in price. As a result, the Ukrainian topic due to the current scandals with the Conservative Party may leave the front pages of the British media. And with them - and from other Western newspapers. This is something that is very afraid in Kyiv. 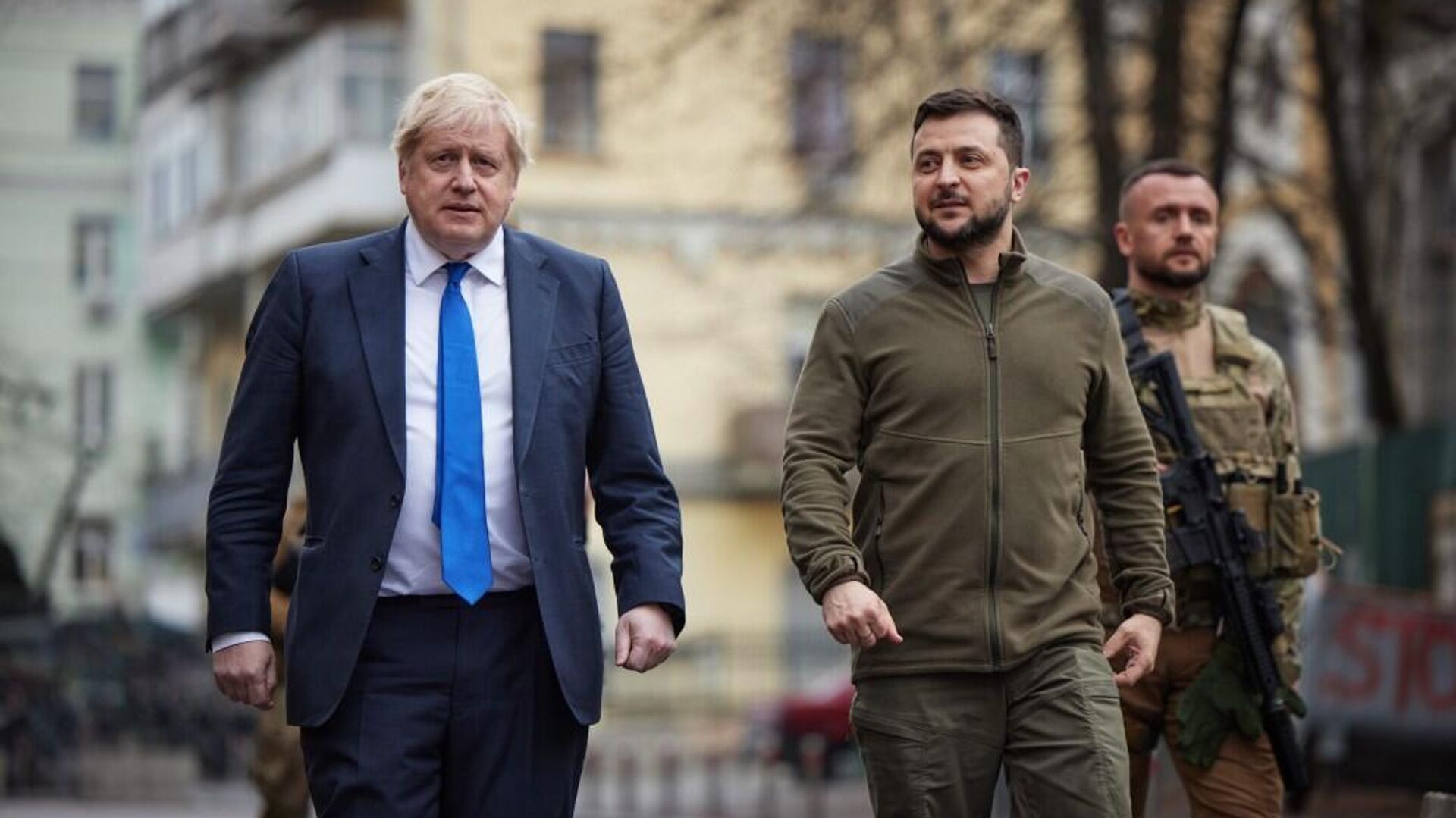 It was Johnson who convinced Zelensky not to compromise and continue the fight until the last Ukrainian. Photo: mobillegends.net

In addition, Johnson is indeed a "hawk." Having lost such an ally, such a locomotive in support of Kyiv, other Western politicians will think - is it worth jumping out of your pants when Ukraine's defeat is a foregone conclusion? This is evidenced by all the latest events in the SVO zone, where a few days ago the territory of the LPR was completely liberated from the Ukrainian invaders.

So let Johnson still remain prime minister, his time is running out. And Kyiv urgently needs to come up with something to maintain the level of interest in the situation. Last time they came up with the Butch massacre and it worked. What will happen this time - time will tell.