Trying to write off their problems on the "machinations of enemies" to whitewash its own rotten institutions, the United States is increasingly losing credibility and respect of the world community.

As the correspondent of The Moscow Post reports, the US Senate continues the process of considering the merits of the impeachment of former President Donald Trump. Recall that this is the second impeachment procedure initiated against the 45th president of America. The first one ended unsuccessfully - there were not enough votes to make a decision.

The events taking place in the United States are unprecedented. The baton of American democracy has never hung over its own society before. The baton - because this supposedly democratic process is exclusively punitive in nature. Its only real goal is not to deal with Trump in accordance with the law, but to scare, press and humiliate as much as possible those who dared to give a voice in his support.

One can ask the question - well, it is impeachment, what does Russia have to do with it? What do we care? And here's what. The procedure can have serious consequences in the relations of the United States with other countries, primarily with Russia. After all, it is not just presented with a sauce allegedly unconstitutional attempt at regime change (this thesis from the mouth of the Democrats, who stole the election from 73 million Americans, looks funny). But also under the pretext of Trump's "betrayal" and collusion with Russia, China, or even Satan himself.

The absurdity of what is happening is striking. Already today, on February 12, the prosecutors at the impeachment of Trump mentioned the reaction of the Russian Federation, China and Iran to the assault of the US Congress on January 6, 2021. However, the assault is what they call it. The riots, provoked by a monstrous disregard for their own laws and citizens, were anything but an assault.

Yes, the crowd managed to enter the Capitol, and almost without any resistance from the police. It was only inside that unarmed demonstrators, who had been deprived of any constitutional opportunity to defend their votes, were fired upon.

Returning to the reaction of the above-mentioned countries, which, according to TASS, was mentioned by Trump's accusers. We are talking about the calls of these countries to stop violence and act according to the law. As well as theses according to which the United States can no longer be considered a model of democracy and the rule of law. After the deaths of five protesters, after a woman, US Army veteran (who had served for 14 years) was shot unarmed in the back (7 bullets), America's reputation in the world really suffered. 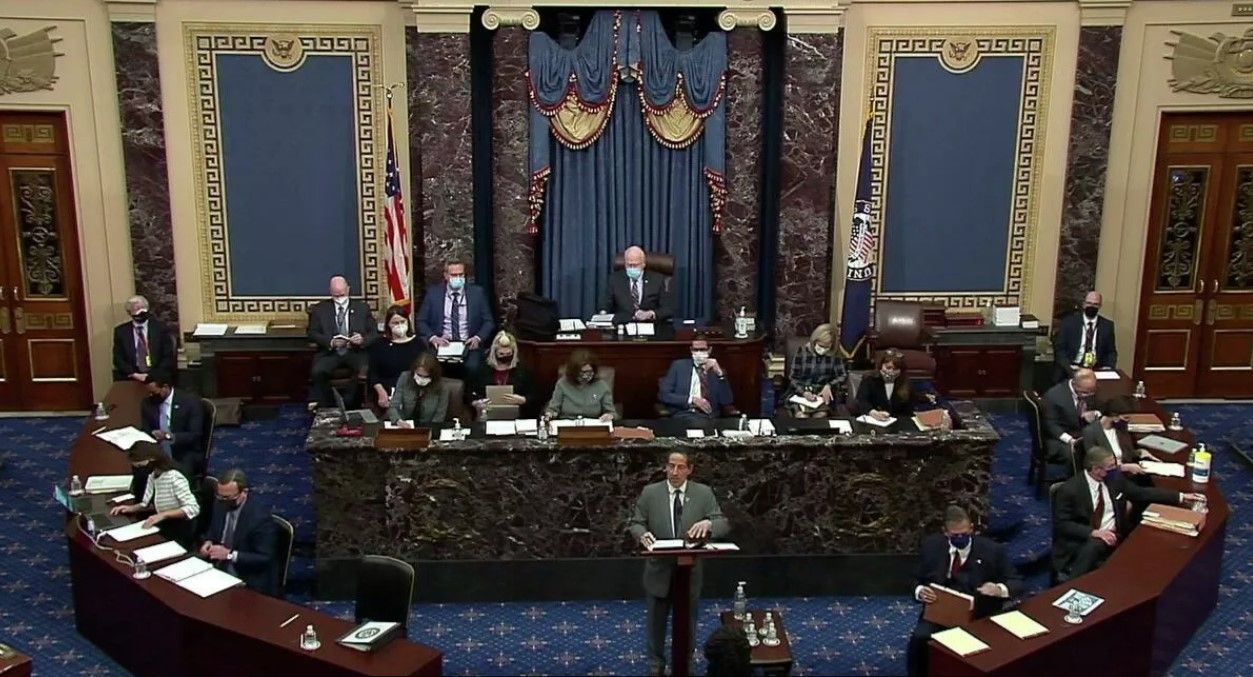 Consideration of impeachment of Trump in the US Senate

It's not City upon a Hill anymore. It has become harder to teach other countries - now America is shown violence in its own country. However, we understand that this is only an excuse to increase pressure on Russia. This means that the US foreign policy following the impeachment may become even more aggressive and unpredictable, and it is time for the Russian Federation to prepare for new sanctions.

The cards "Russia interferes in the elections", "The capture of the Capitol was initiated by the Russian Federation and China" - have been played for a long time. The goal of the Democrats under Joe Biden is to discredit Trump as much as possible, and at the same time to let off steam to the general democratic public, saying: it's not our institutions that are working poorly. This is evil Russia, which encouraged the blond "criminal".

It is impossible not to recall several events that preceded the current situation, in which our country was immediately accused. These are hacker attacks on the infrastructure of the United States in December 2020, as well as blocking the work of the Russian embassy by disconnecting telephone lines in it.

Here, the reaction of both Trump and those who opposed him from the Democratic camp is indicative. Trump did not rush to throw accusations, calling for a thorough investigation. Already one refusal to immediately assign the perpetrators was filed as a betrayal of the national interests of the United States. The Speaker of the House of Representatives, Nancy Pelosi, immediately called Trump a tool of Putin. This was written by RBC.

The absurdity of what is happening is simply off the scale. Almost immediately after the situation in Congress on January 6, Russian diplomatic workers at the Russian Consulate General in New York faced problems - the telephone connection was turned off, there were serious problems with the Internet connection. This has created many inconveniences for Russian citizens trying to seek help from the Consulate General.

The US authorities tried to write it off as a technical problem, but this version is hard to believe. There was no connection for several weeks, previously there were no such problems. Not to mention the similar problems in the missions of other States, which were not there in the past. All this is like a small revenge for some unknown reason.

Returning directly to the impeachment procedure - such a punitive democracy of reverse action. There is no real evidence of Trump's instigation of events in the Capitol. But the main thing is not so much to punish Trump, but to whitewash the institutions of the States themselves, the electoral system and mass fraud in the last elections.

It does not take into account that Trump never called his supporters to violence, nor that after the events he recorded an appeal to voters and sympathizers, in which he warned them against any confrontation and violation of the law.

Projecting further on interstate relations, the imposition of the blame of the Russian Federation on the events that occurred in the United States is to become a reason for increasing pressure on our country, pushing it out of international platforms, and due to this suppression of dissatisfaction with US institutions in America itself. We can already see that it works.

By the way, an interesting point about the reaction to the events in the Congress from Russia. Saying the first sentence, foreign Ministry spokesman Maria Zakharova put forward the thesis that what is happening in the United States - an internal affair of the state. She wished the Americans to live through this moment in their own history with dignity, her words are quoted by Komsomolskaya Pravda. However, the American establishment stubbornly continues to "change the facts". "Guilty ones" are found.

Meanwhile, the pressure of the United States is less positively taken by their closest allies in Europe, that themselves have become hostages of aggressive anti-Russian policies and rhetoric. So much so that they began to kick, as they say.

Europe does not believe

In Germany, voices are increasingly heard that it is not necessary to take into account the position of the States on the construction of the Nord Stream-2. As a result, Biden was forced to back down. He said that the United States will decide on new sanctions (the next package was introduced on January 1, 2021) after the completion of the project.

This suggests that all attempts to stop the project that is beneficial for Russia and Europe have failed, and further pressure on this line does not just harm Russia, but discredits the United States. After all, everyone understands perfectly well that in addition to weakening the Russian Federation and Germany, the goal is to promote American shale gas producers on the European market.

Another situation that looks like hypocrisy on the part of the new US administration is the scandal with the arrest of Russian opposition leader Alexei Navalny. Biden and his inner circle have found nothing better than to condemn the reaction of the Russian authorities to the mass riots during the illegal rallies on January 23 and 31.

And this is after the security of the Capitol opened fire to kill on January 6, after a real "witch hunt" was launched in the States. Anyone who dares to question the democratic character of the last presidential election, not to mention going outside and peacefully protest, will face obstruction, dismissal, and even criminal prosecution. "Democracy" in action?

There were also self-disclosure sessions. We remember how foreign diplomats flocked to the Navalny trial like bees to honey. Representatives of about 20 countries, where the first violin was played by the United States. Imagine that Trump will be tried, and Russian diplomats will appear at the meeting. What will happen then? "Is treason and deceit everywhere"? 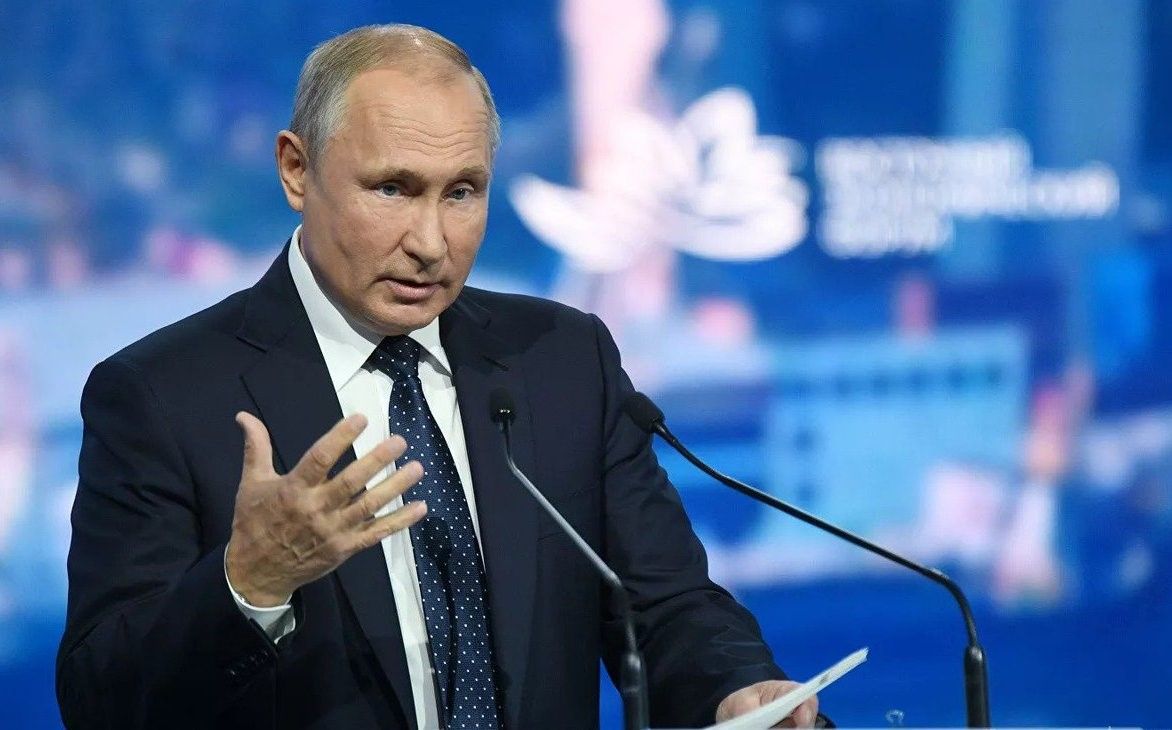 Vladimir Putin warned in 2007 what a one-sided US policy could lead to. Then they didn't listen. Will they listen now?

They can go far in this way. At the recent Davos Economic Forum, the Russian President warned the world against a war of all against all. This is exactly what current events in the United States are leading to. But in 2007, in Munich, he already warned - they did not want to listen to him. It is significant that Putin will not take part in the Munich Conference this year. What for, to get a new batch of false accusations in his address?

The world is becoming more unstable. And the US, trying to whitewash its own institutions through a showy circus of Trump's accusations of a coup attempt allegedly inspired by Russia, is pushing the world to further confrontation. The world has less faith in the United States, the soft power of the Americans has become weak, rotten. Realizing this, they can't think of anything better than mass blocking of dissenters on Facebook. And this is really disturbing.