From the sick head to the "Father"

Europe and the United States are using the crisis on the Polish-Belarusian border to increase pressure on the regime of Alexander Lukashenko, and they want to hit Russia through it.

According to the correspondent of The Moscow Post, in the near future the fifth package of European Union sanctions against Belarus will be adopted. This time due to the migration crisis on the Polish-Belarusian border. This was told by the main herald of European diplomacy, EU representative for security and foreign affairs Josep Borrel.

His words did not surprise anyone - new sanctions against the regime of Alexander Lukashenko, who this time was already appointed guilty and for the migrants seeking in the EU were in the air for all months after the failure of the coup attempt in Minsk.

The rhetoric used by Borrel is also not surprising: "Today's decision reflects the determination of the European Union to resist the use of migrants for political purposes. We are suppressing this inhumane and illegal practice. "

Borrel has already talked about inhumanity. And after all, he is well aware that if anyone treats people inhumanely at the border, then these are the Polish authorities and the European bureaucracy, which spat on its own declared values.

Three or four years ago, rallies were held in the EU with posters "Welcome!" And today, Poland pulled not only law enforcement agencies, but also army formations into the border area. There have already been several incidents and breakthroughs, a day ago more than 50 people were able to break the fence and moved inland.

At this time, new groups of refugees arriving in Belarus, incidentally, are mainly charter flights (people are ready to pay the latter, so it is profitable business) are grouped in Minsk to go to the border. But not only charter. The EU itself, and with it Ukraine running ahead of the European "steam locomotive," imposed sanctions on Belarusian airlines, prohibiting them from flying over their territory.

As a result, airlines, primarily the state-owned Belavia, were forced to increase the number of flights to other destinations, including Turkey. To compensate for lost income. Now, in the eyes of the Western citizen, this is being turned into a cunning plan by Putin-Lukashenko to collapse Europe.

As for the problem itself, it did not arise yesterday, but when NATO, led by the United States, with the participation of the same Poland, Latvia, Lithuania, Germany, France, conducted military operations in the Middle East and North Africa, destroyed state institutions, the economy, and infrastructure.

Today, most of the refugees on the Polish-Belarusian border are Iraqi Kurds. It's no secret to anyone. It was NATO and European countries that defeated Iraq. Kurds, as has happened more than once, have promised their state. And, as always, using, they simply abandoned to their fate. The last living example is Afghanistan, and people falling from the fairings of US transport aircraft.

And what does Belarus and Alexander Lukashenko have to do with this, not to mention Russia and Vladimir Putin? Many European analysts and columnists today are embarrassed to comment on the statements of their own authorities - they sound so absurd and illogical.

It seems that the EU countries have finally lost their adequacy. But this is only at first glance. In fact, all their actions are clearly thought out. The main goal is to remove responsibility for the migration crisis in the eyes of their own voters and prevent a further rise in right-wing sentiment. And what is good in the same France, for example, will be taken, and elected President Jean-Marie Le Pen. The right turn has emerged both in Poland, and in Hungary, and in other countries affected by the past absolutely irresponsible migration policy of the European Union.

And in it, Europe made colossal mistakes. And instead of solving the problem, instead of negotiating with Belarus on a mutually beneficial basis, as Lukashenko called for, Polish President Andrzej Duda calls Svetlana Tikhanovskaya to discuss the situation on the border with her.

And then Duda and other European politicians wonder why Lukashenko is not at all eager to bend under such pressure. As a result, everything, as always, comes down to Russia. Duda and Merkel persuade Putin to talk to Lukashenko. And again - and Putin, then? And what is illegal in general, in their view, Lukashenko does?

After all, the second goal is to continue sanctions pressure on his regime, which is confirmed by new sanctions. Behind this process should be the United States, which continues the geopolitical struggle for Belarus after its defeat last year.

Weakening Belarus, the United States is also weakening Russia, trying to slow down the integration processes in the Union State. The problem with migrants is simply used in the interests of large players. As well as small European political temporary workers, distracting the attention of voters from their own failures.

But in the inverted world of Western politicians, the opposite is true. And now US Secretary of State Anthony Blinken said that the migration crisis should divert attention from Russia's build-up of military power at the borders with Ukraine. The Kremlin, of course, denied this. But in Ukraine, they really use the crisis at the border to distract the population from the impending energy crisis and other problems.

According to Regnum, the heads of the European Parliament's foreign affairs committees, twelve EU countries, as well as Ukraine and Great Britain, are now demanding neither much nor little to start an international trial against Belarusian President Alexander Lukashenko and his associates.

They also demand new sanctions. At the same time, the Russian Aeroflot, which was previously demanded in Poland, Ukraine and other states, was not placed under restrictions in the EU. According to Lenta.ru, the authors of the restrictions were forced to admit that they had no evidence against the Russian airline. But after all, there is also nothing against Belarus.

Yesterday, Belarus announced that they would be forced to respond harshly to new EU sanctions. Earlier, Lukashenko had already made it clear that the response could include stopping gas transit. But there will be other sensitive moments for the EU.

"We defend our independence and will be ready to take any, even the toughest measures. What they will be, the government will decide, which has plans of action for any development of the situation, "said press secretary of the Belarusian Foreign Ministry Anatoly Eye.

The eye rejected the accusations of EU countries against Minsk that the Belarusian authorities are coordinating the movement of migrants to the border with the European Union. "We do not need to coordinate anything, the refugees themselves declare where they are going, why they are going. In this case, we are a transit country, "the TASS official quotes.

For us, the main thing is that in all this dubious history they are trying to draw Russia. "On the sidelines" of the recent APEC summit, in which Vladimir Putin participated via video link, he recalled that in all this situation, as always, they forget about people.

"Humanitarian issues must be at the forefront. At the border, Polish border guards and representatives of the armed forces beat potential migrants, shoot military weapons on top of their heads, turn on sirens and light at night. There are children, women in the last months of pregnancy. It does not really fit with the ideas of humanism, which supposedly underlie the entire policy of our Western neighbors, "the head of state said. 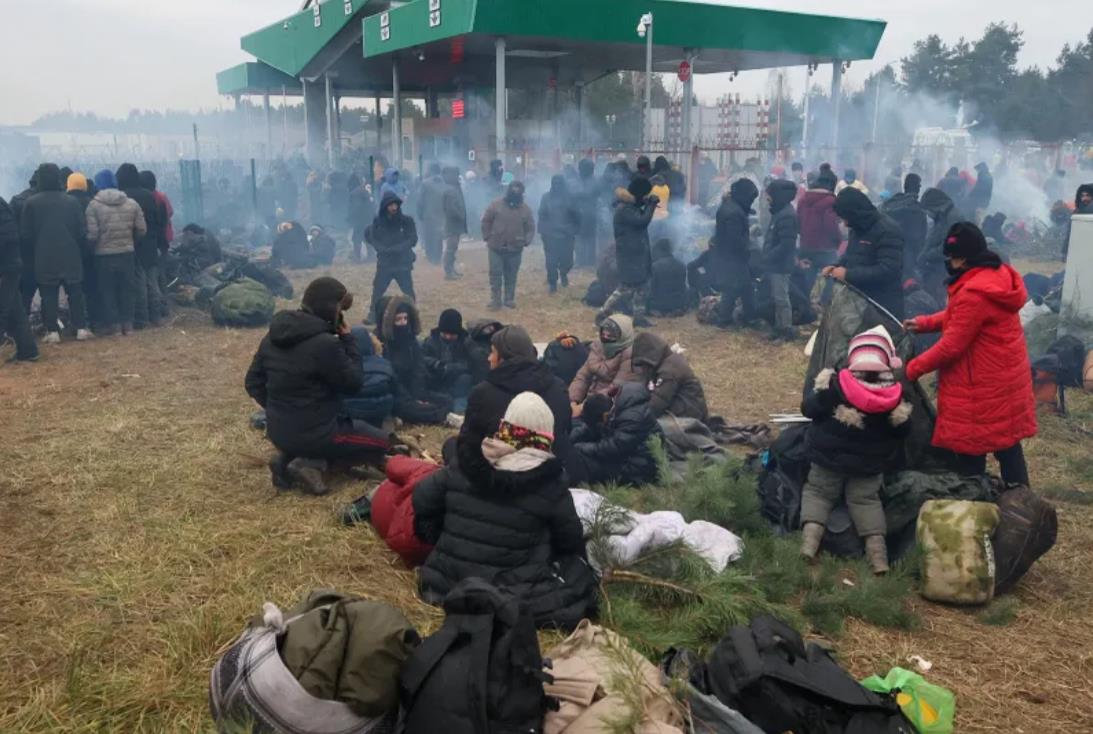 In desperation, refugees seized one of the checkpoints on the border

It is difficult to disagree with the President. But this is the policy of the United States and a number of European countries today, which continue to think in the spirit of the Cold War and cynically use the crisis for their own purposes. The danger is that tension is growing, and any incident with victims on the Polish-Belarusian border can lead to unpredictable escalation.

Fortunately, there are positive signals. On Monday, acting German Chancellor Angela Merkel spoke with the Belarusian president by phone. The parties discussed the prospects for resolving the migration crisis and providing humanitarian assistance to refugees. And this gives hope that people on the border will at least be fed and heated.

10 January, 7:47
From the West to the rise: Russia chooses its own path
See also