From the generosity of their own: Russia collects debts

Unfriendly states have blocked Russia's ability to receive debts from third countries - but they will still have to pay. And - by and large.

Sanctions restrictions on unfriendly, which increasingly resemble hostile ones, have blocked most of Russia's external financial transactions. This affected, first of all, settlements in dollars and euros. One of them is connected with these problems - Russia cannot receive debts from third countries, including unfriendly ones. And they owe us tens of billions of dollars.

However, the Russian Federation found an opportunity to overcome these restrictions and make them pay - including the very unfriendly countries that also did not hesitate to borrow before they began an openly predatory sanctions policy. Who owes what to whom, and how to get funds - the correspondent of The Moscow Post understood.

The method is simple: by its decision, the Russian Government from 2023 will be able to cede the right to claim foreign states on debts to Russia to non-sanctioned structures operating in debtor countries. This became known from the materials for the draft budget.

Such a mechanism will ensure the receipt of foreign debts to the federal budget, bypassing sanctions from the United States and the EU. In addition, if Russia agrees with someone on the sale of bilateral debts, settlements will have to be carried out not in dollars, but in currencies that are not threatened with blocking due to sanctions.

It turns out that the efforts of unfriendly states, especially those where the key financial centers are located (USA and Great Britain) in this direction will go to dust.

Alternative for them may be secondary sanctions against buyers of debt obligations of the Russian Federation. But in this way sanctions can be imposed on all financial players in general - such ideas cause rejection among many allies of our ill-wishers.

Who and how much

Such tactics of the actions of the Government of the Russian Federation, headed by Mikhail Mishustin, may lead to the fact that the Russian Federation will still have to pay its debts. According to the Central Bank, as of the beginning of 2022, Russia owed $49 billion. This is the total debt of non-residents to Russian government bodies

Of these, $40 is in US dollars. Given that a significant part of this amount is supposed to be returned in national currencies, such a step could further shake the dominance of the dollar in the world.

However, the largest debtor (data for 2020) is Belarus. She owes us about $8 billion, but there are just no problems with her. Next come Bangladesh, Venezuela, India and Vietnam. First of all, Ukraine is allocated from unfriendly countries, which owes us $600 million in dollars.

However, this does not take into account a series of other loans, including in rubles - for example, a well-known debt of 3 billion rubles, which Russia also gave to the government of Viktor Yanukovych.

Each of the countries owed Russia more than $1 billion at the end of 2019: Bangladesh, Venezuela, India, Vietnam and Yemen, according to data from the World Bank.

A separate block is the debt of African countries (not counting Egypt) to Russia. In total, it amounted to $973 million at the end of 2019. These are Somalia ($418 million), as well as Mozambique, Ethiopia, Madagascar, Zambia, Sudan and Tanzania. Basically, these countries took loans from the USSR, but there are also new Russian loans - from Zambia and Mozambique, the statistics of the World Bank said. In 2019, Egypt's bilateral debt to Russia in the amount of $495.5 million appeared.

Serious amounts of Russia should be in the East. In the past couple of years, India's debt to Russia has grown significantly. It amounted to almost $3 billion.

Debts to Russia significantly increased in two states: India (+ 74%, up to almost $3 billion). By the way, the increase in debt of India (as well as Bangladesh) is associated with an increase in the volume of work on the construction of nuclear power plants in these countries by Rosatom. Note that the same India, with which special cooperation has been established in the field of arms supply, is not supplied to the credit, and similar obligations of Bangladesh to the Russian Federation are closed.

Some bilateral debts to the Russian Federation are fixed at a certain mark and have not been growing for several years. Afghanistan as of 2009 owed Russia $849 million, Cambodia, as of 2007, $458 million, Syria, as of 2011, $525 million. These amounts have not changed since then. Vietnam has a serious debt to the Russian Federation - $1.62 billion. A significant part of it was formed back in the Soviet period.

In addition, Russia is known to be a generous soul. And a significant part of financial assistance to the same developing states, as well as to those in a really difficult situation (Syria), is provided free of charge. 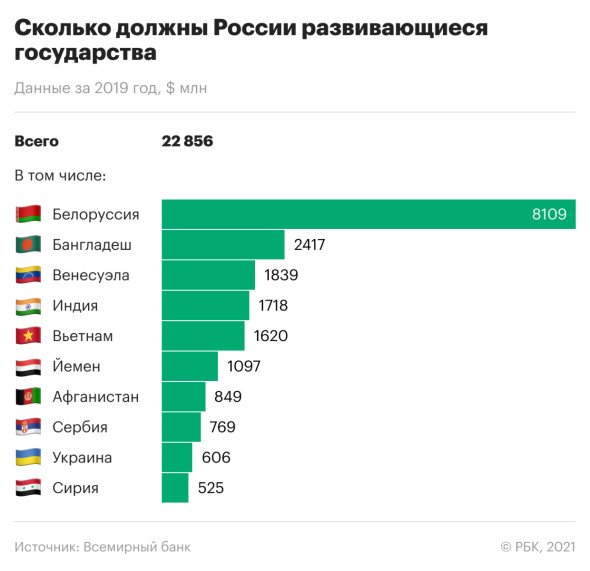 We will always agree with Belarus, and new decisions that will be submitted to the budget will help to take what is due from the rest. Photo: RBC

There are also certain difficulties with a more accurate calculation of the debt of third-party states to Russia. The Ministry of Finance does not provide information on a number of intergovernmental loans to the public. However, as we can see, the Government is taking measures to get what is due to us - despite the "draconian" sanctions. It remains to be hoped that the measures proposed by the Cabinet of Ministers will work.