Zelensky, realizing that he has plunged himself and the country hostage to Western reactionaries, is increasingly demanding money and weapons. This time, a former clown, broke to the UN.

The day before, a whole series of significant events took place that will largely change the situation in the zone of the Special Military Operation to Protect Donbass. And most importantly, Russian President Vladimir Putin announced partial mobilization - 300 thousand fighters will be put into operation.

Yesterday, the parties exchanged prisoners under the guarantee of Turkish President Recep Tayyip Erdogan. All this happens against the background of announcements of an early referendum in the liberated territories of the DPR, LPR, Kherson and Zaporizhzhya regions.

About tectonic shifts in the confrontation with the West in Ukraine - in the material of the correspondent of The Moscow Post.

Vladimir Putin announced partial mobilization in his morning address to the nation. On the line of combat contact of 1 thousand kilometers of forces and means involved in the military-military organization, it was not enough against the background of several waves of mobilization in Ukraine, which literally litters our positions with cannon meat. If we add mass supplies of weapons from NATO countries to this, strengthening the grouping of our troops is an absolutely reasonable decision.

Many regarded such a step unequivocally - Russia is "waking up," the awareness of the existential nature of the confrontation finally comes. And grief to the one who will make the Russian Ivan get off his furnace.

We will not explain in detail for the "frightened patriots" that no one will distribute summons on the street, as our former Ukrainian "partners" do. Strictly designated categories of citizens who previously served and have combat experience will be mobilized.

At the same time, after the "regrouping" of Russian troops and their exodus from the Kharkov region, other liberated territories sharply accelerated preparations for holding referendums on joining Russia. They will be held from September 23 to 27.

The initiative to immediately organize votes on the entry of the republics of Donbass into Russia was previously made by the public chambers of the LPR and DPR. With such a request, they turned to the heads of the regions. The day before, the authorities of the Kherson and Zaporizhzhya regions announced their intentions to hold referendums.

Understanding the people living there is not difficult. They had wanted to return to their Russian family before. But against the background of the fact that the Kyiv punishers staged in the Kharkov region after their occupation of Izyum, Kupyansk and other settlements, it is no longer possible to wait.

"Using the example of the Kharkiv region, we see what fate awaits people when returning to the control of Kyiv," said Andrei Turchak, secretary of the General Council of the United Russia party, one of those who almost regularly visited the liberated territories, helping to establish a peaceful life there.

In Kyiv and his closest allies, this caused almost hysteria. More accusations and curses rained down. Western countries said in unison that they did not recognize the results of referendums - as if Russia needed their approval after they themselves opened the Pandora Box in Kosovo.

As a result, Kyiv was in time trouble. To this day, his advantage was the advantage in manpower. Those mobilized from the Russian Federation level this advantage. And the very meaning of referendums goes far beyond the actual expression of the will of citizens.

Indeed, if they are included in Russia, they will be officially considered Russian territory, which will allow them to legally use all forces and means to protect them. Including nuclear weapons, if there is a danger for Russia, as for the state. 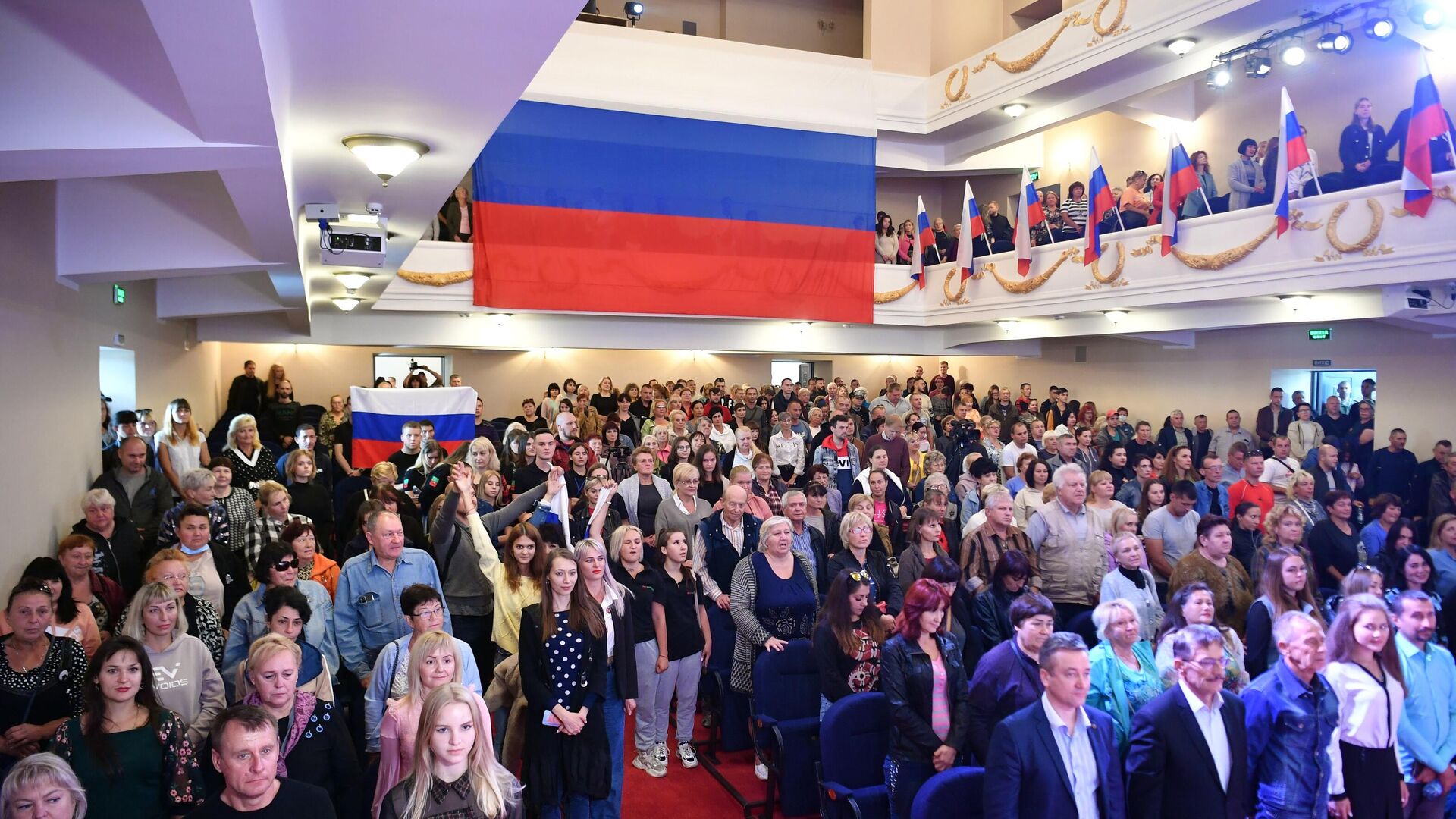 In the States, irresponsible retired military have already announced that in this case they will strike at the Crimea and the Black Sea Fleet. Apparently, Washington's desire for self-destruction is some kind of consequence of the left-liberal madness that has swept the United States.

And the danger to our state is obvious, since EU and NATO functionaries are already openly talking about the need for "deimperialization" and "decolonization" of Russia. Read - its division into many warring territories is the long-standing dream of our former Anglo-Saxon partners. What, in fact, Putin said.

Break up the UN

All these events took place against the backdrop of the opening of the 77th UN General Assembly in New York. where our delegation is led by Russian Foreign Minister Sergei Lavrov.

Among others, President of Ukraine Volodymyr Zelenskyy also spoke yesterday via video link. He said that a truce could be reached only on the terms of Ukraine, and once again called for an increase in the supply of weapons and ammunition to his country. Fighting until the last Ukrainian is a strategy they have long adopted. But fear in connection with the buildup of the forces and capabilities of the Russian Federation in the SVO zone seems to have spurred on Bankova hysteria.

Zelensky again asked for weapons, heavy equipment. However, there is nothing new in this. But there was something else - he, like a number of other Western politicians, called for reform of the UN, from where it is proposed to expel Russia. Or, at worst, deprive her of her veto power, and introduce new permanent members of the Security Council. Germany is also eager there - as if Berlin had forgotten against the background of what events the organization was created.

But there is a nuance - it is impossible to carry out UN reform without the approval of Russia and the Security Council, of which it is a member. And any such attempts to reform the structure and hit Russia with rights will mean only one thing - the UN will repeat the sad fate of the League of Nations.

Returning to the supply of weapons to Kyiv, a lot of European military functionaries announced the depletion of their own armaments - they gave too much to Ukraine. For example, this situation has developed in the Bundeswehr.

Despite this, the country's Foreign Minister Annalena Berbock said that Germany has allocated special capacities for the production of weapons for Kyiv, calling for the supply of weapons in the autumn.

Note that the reserves of the German army were exhausted by mid-April, in connection with which the German authorities turned to arms manufacturers with a request for a level of readiness for the production of weapons specifically for Ukraine.

As a result, by August Germany was sending rare and unique weapons to Ukraine, which had not even entered the balance sheet of the German army. This armament required special training for operation. In addition, German Chancellor Olaf Scholz assured that Berlin is training for the Armed Forces of Ukraine.

Given how many mercenaries from NATO countries took part in the hostilities in the Kharkov region, it is quite obvious that Russia has long been fighting not with Ukraine, but with the combined power of the West. And there is no need to doubt that he wants to destroy our country. Therefore, Russia has every right to use all forces and means to defend itself.

Apparently, they do not understand one thing - for our country this is an existential question, a matter of life and death. But what have the Americans forgotten off our coast, except for the desire to destroy Russia and world hegemony?

It is noteworthy that before Vladimir Putin announced the mobilization, French President Emmanuel Macron tried to get through to him. The latter was supposed to convince Putin not to take such a step. But just a few days earlier, Donetsk was fired upon from the Caesar artillery mount set up by Paris. 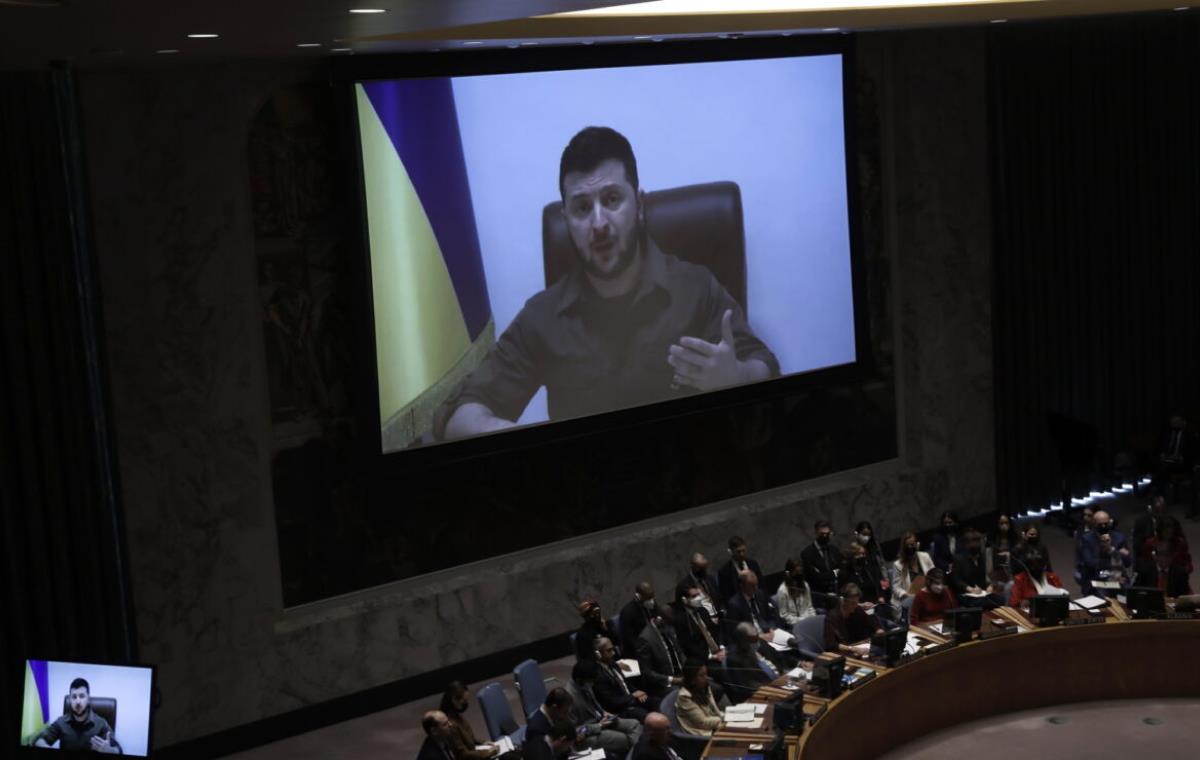 At the UN, Zelensky asked for long-range weapons to attack the territory of Russia. To say he's playing with fire (nuclear) is to say nothing. Photo: yakutsk.ru

The shell hit a public transport stop and a store, killing many civilians. After that, any attempts by Macron to row as peacekeepers look unconvincing. The French leader was refused a conversation.

Returning a little back, against the background of announcements of referendums, Kyiv will continue to arrange increasingly dirty provocations. After all, he has practically no chance.