"For three" about peace

According to the correspondent of The Moscow Post, today, Russian President Vladimir Putin will conduct negotiations with Azerbaijani President Ilham Aliyev and Armenian Prime Minister Nikol Pashinyan. Recently, war was raging between these states, hundreds of refugees were left without their homes, and now, as on November 10, 2020, they will again find themselves at the same negotiating table.

However, there is no use to be deceived - Pashinyan and Aliyev will hardly talk directly to each other - the degree of tension is still too high after the recent war. So most likely, Putin, Aliyev and Pashinyan will conduct negotiations separately, and only the diplomatic missions will meet in person.

As in the case of the cessation of hostilities, the Head of the Russian state acts as an arbitrator and guarantor, while the conflicting parties pursue a whole bunch of aims. It is no secret that despite the agreement of November 10, the withdrawal of troops and the introduction of peacekeepers, the situation in Nagorno-Karabakh (in both parts, which are behind Armenia and Azerbaijan) remains tense.

As the Russian President noted earlier, the agreement of November 10 is being consistently implemented, but many prisoners remain on both sides, and the issues of demarcation of the territories designated in the agreement are still not fully resolved. Aliyev, having secured the support of Turkish leader Recep Tayyip  Erdoğan, seems to aim at those parts of Artsakh that were beyond his influence.

So much so that there may be a threat of a new conflict. As it is known, Azerbaijan even established its Victory Day as a result of the success in Artsakh, and Aliyev himself even said that Yerevan and a number of other territories of Armenia are allegedly the historical territory of his country.

Erdoğan - three not a crowd?

In Yerevan, these words are not considered anything other than a hint of a new war. Many experts believe that now this is just bravado to support Aliyev's skyrocketing rating. However, Erdoğan is behind Aliyev - and he could become the main inspiration for such theses from the mouth of the President of Azerbaijan.

Aliyev's possible task is to convince Russia and international observers that Pashinyan is in no hurry to put up with the current status quo, and can use provocations to present Azerbaijan as an aggressor. A new round of tension may indeed be beneficial to Pashinyan.

The situation inside the country is heated to the limit - he needs at least some kind of victory, even if it is moral — in order to show that there are people at the other end who do not keep their word. At the same time, Pashinyan understands that Moscow will not allow another coup and anarchy in Yerevan. This is also evidenced by the attempt to cover Pashinyan from the people's wrath. After all, Putin said earlier that he did not consider Pashinyan's actions during the war in Karabakh a betrayal of national interests. This was reported by RIA Novosti.

Aliyev also benefits from provocations in another part: not so much in this, but in the desire to convince Moscow and the entire world community of the need to expand the peacekeeping contingent. Erdoğan went to Transcaucasia, but did not go to the peacekeeping mission - only at the level of an observation group. Moscow's task is to demonstrate that the settlement is going according to the plan, and the Russian Federation is coping with the role of an arbitrator.

Meanwhile, not everyone in Russia understands our country's interest in this complex problem. Not so long ago, a disaster happened - on December 17, a Russian sapper died while clearing the territories near Shusha. This was written by Gazeta.ru.

This gave reason to think why Russia "sticks its nose" beyond the perimeter of its own borders. "Thinkers" hardly wonder what kind of instability wave a new round of conflict can provoke on our borders. The main thing for Russia is to prevent this, plus the situation with refugees, as well as within the country between the diasporas of Armenia and Azerbaijan.

Of course, in Russia, these "actions" can be seen. And Aliyev’s words concerning the end of the war for Azerbaijan will not be simply trusted. Having such an ally as Erdoğan, and on the wave of mass enthusiasm among the population, the leader of Azerbaijan can easily start feeling "dizziness from success".

In social networks, we managed to find a lot of comments from Azerbaijani citizens who accuse Aliyev for stopping early. And also Russia, which allegedly did not allow to achieve a complete victory. So it was - Russia did not allow Armenia to suffer a complete defeat and also lose the Lachin corridor and Stepanakert itself. Therefore, in mid-December, Azerbaijan could be decided to "be put in its place" a little. 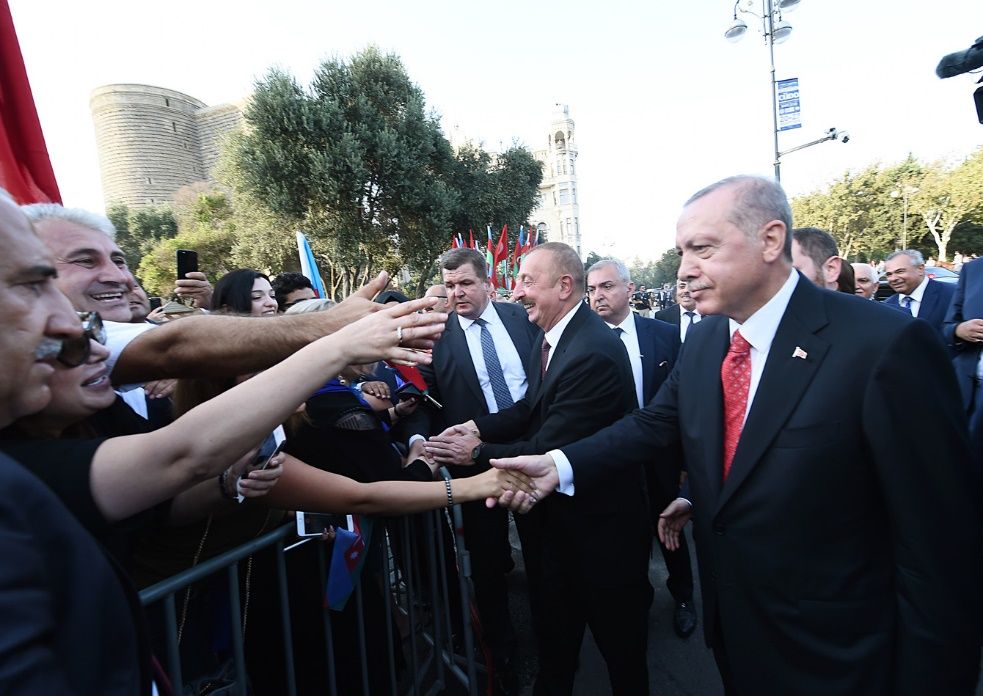 Is Erdoğan the main "engine" of the tension growth on the part of Azerbaijan?

Last December, the Rosselkhoznadzor banned the import of tomatoes and apples from Azerbaijan. It happened unexpectedly - suddenly it turned out that pests were allegedly found in the products of this country. This was written by RBC.

This "amount" should have a serious effect, moreover Turkey will quickly substitute Azerbaijan on the market. In general, Turkey has become almost the main beneficiary of the growing tension: in case of the next war, its role in the settlement should be more extensive. Is this what Erdoğan is counting on, if he is really pushing Aliyev to unfriendly rhetoric?

To sum up, at the upcoming meeting, Putin and the entire foreign policy bloc will have to think for three. For three - bearing Erdoğan in mind, whose representatives, as it is already clear, were not invited to the negotiations, but will carefully monitor them.

Having once passed between Scylla and Charybdis (the second war in Karabakh), Russia now has to preserve and strengthen the fragile balance of power that emerged as a result of a peaceful settlement. Micro-political stability in the entire Transcaucasus will depend on the success of the implementation of the agreements of November 10.

At the same time, it can be assumed that Pashinyan will have no choice but to follow the fairway set by the closest (and indeed the only) ally - Russia. Because for Pashinyan, not only the fate of the territories but also his personal political fate depends on this - and the big question is what prevails in this pair for him.