Frightened of the imaginations about attack on Ukraine, the country is fled by oligarchs, the opposition is under arrest, Rada's deputies – have a rest on Maldives, and ordinary Ukrainians run across cold Kiev with wooden automatic machines.

As the correspondent of The Moscow Post, in Kiev almost panic of rather next "throws" about allegedly preparing "invasion" of Russia reports to Ukraine. The day before from Boryspil one behind one charter flights - not less than 20 boards ordered by representatives of the Ukrainian business and political elite took off.

As reports to RBC champions by quantity of the ordered boards there were Rinat Akhmetov and Boris Kolesnikov. Besides, the private board from 50 people was allegedly ordered by the deputy of the Verkhovna Rada from "Opposition bloc - For life", the millionaire Igor Abramovich. Together with them as if also service staff – the lured journalists, lawyers, CROWBARS depart.

The outcome and the next wave of mass hysteria are connected with the next date of invasion of the Russian Federation which the Spanish Politico and some other the western editions appointed to February 16. Don't "come" already and jokes about what the army of Russia waits for until the earth is chilled - under the next dates don't podverstyvat even crazy conspiracy versions - will attack, and all.

More all American Bloomberg which our diplomats compared to "slightly smelly cheese" caused a stir here. Still on February 5 the edition announced the beginning of "invasion". Later it was explained with a mistake and apologized - like, we prepare news under various options of succession of events.

The western media can be added to news about Russian "invasion" to Mars soon. The western public is so noncritical and "so strongly warmed" by promotion that it will be ready to believe also in this nonsense. Easily!

There is obvious: Russia is exposed to the most unprecedented, most large-scale and cynical information attack in the history. Forces here are obviously not equal - against the Russian Federation beat from all tools, and the western journalists finally forgot what is journalistic standards and in general banal decencies.

Along with it pressure upon nerves on a sanctions subject proceeds: The Russian Federation is threatened with the tightest restrictions, frighten investors and in general all who want to run business with Russia. However, in a sanctions package our well-wishers after all had to refuse the idea to disconnect Russia from SWIFT. Costs for member countries were too big. Besides, any minute. The Russian Federation and China will continue to develop alternative systems, and restrictions will help us only. Here to you and adherence to principles of the western institutions.

In it and "joke": threaten constantly Russia, and punish Ukraine. The poor president of Ukraine Volodymyr Zelensky doesn't know any more what signals from the curators to perceive what role to win back. There will be an attack, won't be, the western partners, and even Putin already really on a threshold exaggerate - give weapon and money. As if a weather vane, a leaf on wind.

As a result Ukraine, without getting out of an economic hole, plunges there even more deeply. The country is "fled" by the capitals, the quotations of the Ukrainian companies fall, hryvnia exchange rate falls.

There are no oligarchs it seems Akhmetov or Kolomoysky for certain in the country any more too. Especially against the background of repressions of the green power against those who walk out of step, or insufficiently provided for a while to save himself from problems. However, Zelensky doesn't hurry to spit against wind yet (that is Igor Kolomoysky and Rinat Akhmetov's interests).

The same decisions of the National Security and Defense Council on so-called smugglers, or code-bound criminals - all understand that for an exception of the list should be brought to whom it is necessary. And any smuggling.

Besides, in the country the opposition is completely destroyed, beaten. Despite her presence at parliament, the head oppositional to a present course of forces Victor Medvedchuk still is under house arrest on fabricated charge of treason. The same is treason, Zelensky "sews" to the fifth president of Ukraine Petro Poroshenko. But to put the last - the gut is thin, Poroshenko has too much financial resource. He controls also a part of radicals from the right nationalist camp - Zelensky just is afraid of them.

Poroshenko's media also work. Apparently, the main criterion is hatred of Russia. While opposition publications and television channels through extrajudicial killings were deprived of the opportunity to work in the legal field. Two days ago, a regular meeting of the National Security and Defense Council took place, as a result of which sanctions were imposed on the Nash TV channel, the last television channel in the country that broadcast an alternative point of view.

As a result, the south-east of Ukraine, which had a choice in 2014, received the very freedom and democracy that the Bolsheviks had talked about for so long. Now in Ukraine, it is easy to go to jail for five years for "like" in Odnoklassniki, and on the streets, in institutions of culture and everyday life, "heavy patrols" appeared.

Their task is to seek out those who, by misunderstanding, speak Russian where this is no longer supposed to be done. A cashier in a store communicating with a client in Russian, a teacher at school explaining a complex mathematical formula in Russian, and an ordinary musician in an underpass - now everyone must monitor the language. These are the realities of a modern democratic society.

Returning to reality, in fact, not a single serious problem of Ukraine is being solved. At the same time, the Ukrainian crisis has again become at the center of security problems - and this time in a much more global context. Following the short-sighted instructions of the Washington administration and the wishes of street Nazis chanting "chants" for oligarchic money, the country was in a complete political, economic, and, most importantly, humanitarian and moral impasse.

The pumping of weapons, which in the event of a real invasion of the Russian Federation will not help, has turned into an end in itself, democratic norms and values ​ ​ - a bud that no one else believes in domestically, European aspirations - into profanation. No one takes to NATO, they give money only for "supporting pants," no one is going to fight instead of Ukrainians. 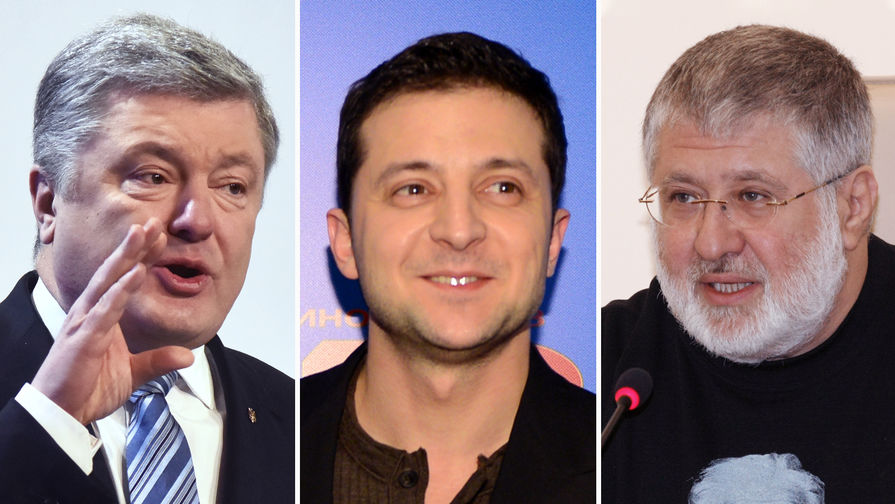 The three main actors of Ukrainian politics, not counting foreign curators: Petro Poroshenko, Volodymyr Zelensky, Igor Kolomoisky. Which of them would remain in the country in the event of a real attack by Russia?

It seems that they are simply mocking Ukraine. Now Western countries are evacuating their diplomatic workers from Ukraine, some are transferring missions to Lviv, awaiting the offensive of the Russian army. At the same time, the deputies of the Rada have winter holidays, many of them scattered around the tropical islands. Especially in the price of the Maldives.

What are the ordinary Ukrainians who are "fed" with anti-Russian "narratives"? They run with wooden machine guns around cold Kiev, prepare to fight back against the aggressor. What will they do if Putin never attacks? Here you are and European Ukraine, the curtain.