The United States will remain the world's "gendarme" regardless of the outcome of the presidential election.

As the correspondent of The Moscow Post, today at 9.00 Moscow time in the United States, the last polling station for voting in the presidential election was closed. Both candidates — Republican Donald Trump and Democrat Joe Biden have already claimed victory. But the official results are far away: everything can change at the last moment, as it was in 2016, when the victory literally went away of Hillary Clinton’s hands.

The entire world is watching the US election with bated breath. Meanwhile, experts agree that regardless of the name of the winner, the world will not become either more stable or safer. The United States will continue to pursue an expansionary foreign policy. The formula has long been known: pressure, destabilization, colour revolutions, political and military methods to achieve economic advantages.

Russia is no exception. The only difference is that Trump is more of a pragmatist, and he does not seek to punish our country, as Joe Biden constantly talks about. But just as Biden he accuses everyone and everything of working for Russian intelligence, ties to the Russian elite, and undermining national security.

Relations with our country have become one of the central topics of the election campaign for both candidates. The most dirty, noisy and scandalous campaign in the history of the United States. When there are a lot of problems at home, the best way to distract people from them is to play the external enemy card. But in this case, both candidates have backed themselves into a corner. 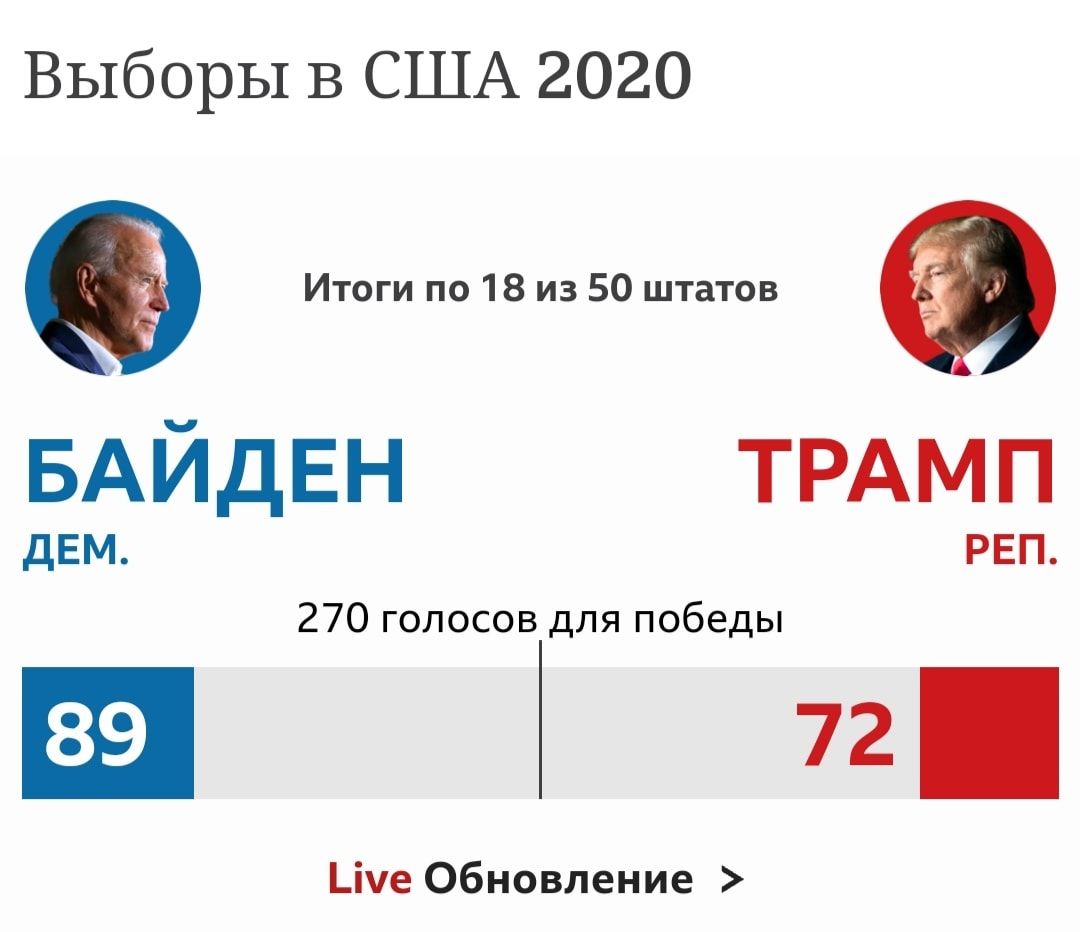 Preliminary results after counting electoral votes in 18 of the 50 states. Everything can be changed by the evening.

No serious global problem can be solved without Russia. Including military crises in the Middle East, Transcaucasia, Ukraine, and North Africa. As the journalist Vladimir Pozner accurately put it, Americans are like a house painter who has painted over the floor to such an extent that he finds himself in a corner and can't get out.

This is not so much about sanctions as about the very attitude to the conflict. At one time, well-wishers thought that Donald Trump would be able to pursue a policy independent of most of the establishment. It was a mistake. At the end of 2017, Trump approved a new package of sanctions against Russia for alleged violations by the Russian side of the Treaty on the elimination of intermediate-range and short-range missiles (INF).

Under Trump, the enormous pressure on our country and its European partners in the Nord Stream 2 is being continued. At the end of 2019 - a new round of tension. The sanctions signed by Trump against the NS2 builders were included in a separate article in the US defense budget for 2020.

Meanwhile, Trump was still the person who could be negotiated with. Biden, on the other hand, does not seem to want to solve problems in a dialogue at all. Together with his victory, we can get a new series of colour revolutions, and maybe even another local conflict. Since we have more or less studied Trump over the past four years, let's take a closer look at what we can expect from his competitor.

According to the authors of the Discred, website, Biden's appearance in the White House will mean shifting the main burden in the US fight with Russia from the military aspect to the destabilization of the situation inside the country by splitting the Russian elite. We experienced this in the 1990s and early 2000s. Grants to nonprofit organizations, internships at Harvard, and then barricades and calls for violence against law enforcement.

On the other hand, Biden may try to save the START-3 Treaty, which Trump does not want to renew. The reason is simple: it turned out that the withdrawal from the previous agreements on strategic weapons did not weaken Russia militarily, but untied its hands. Since then, our country has created a new generation of hypersonic weapons, primarily the Tsircon, Kinzhal, and Avangard missile systems. 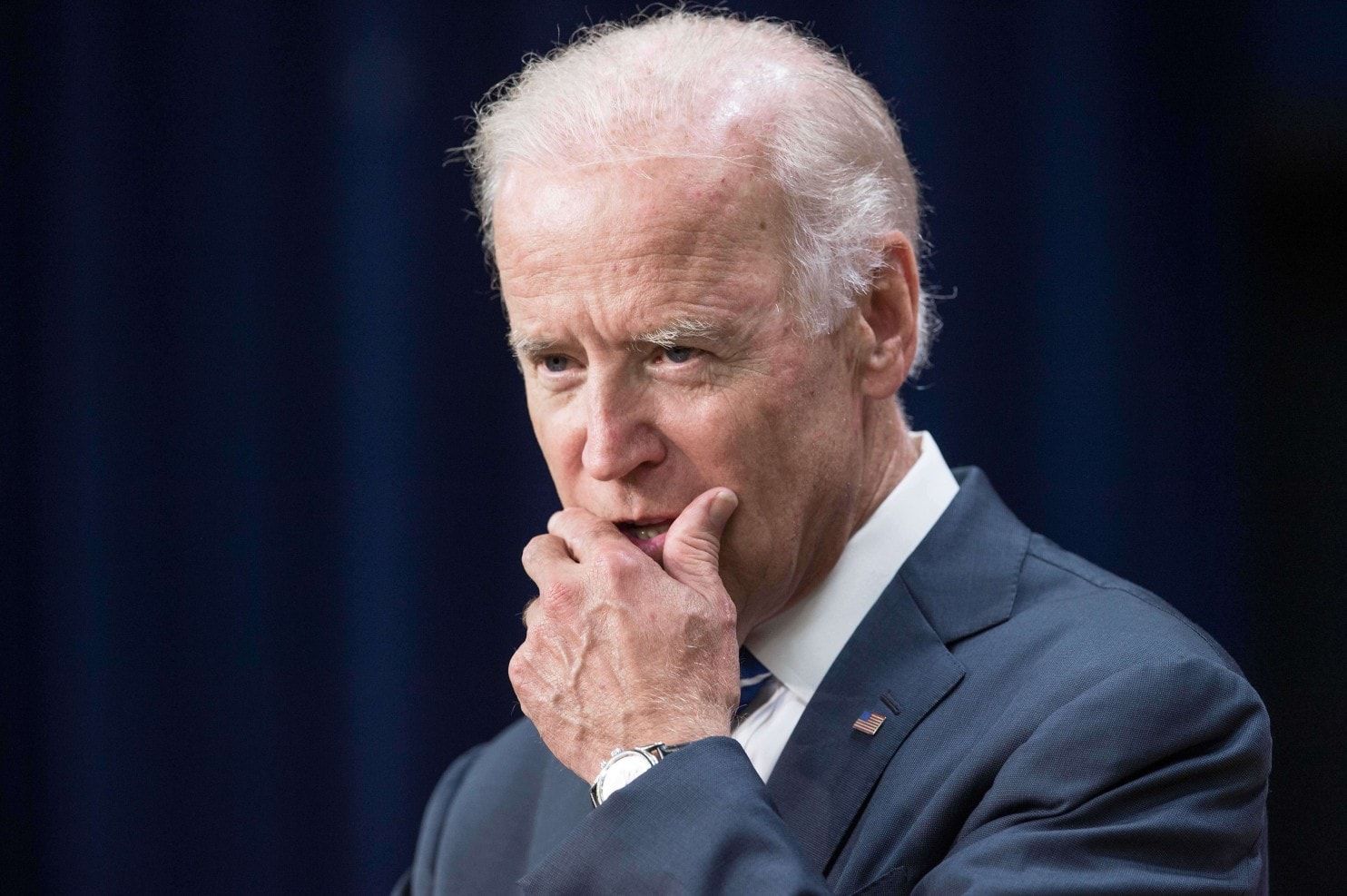 Biden makes no secret of his desire to punish Russia

It is also encouraging that Biden's inner circle previously denied Trump's threats to move American nuclear weapons to Poland and would do everything possible to slow down the transfer of American troops to this country from Germany.

This means that, at least in the first year, if Biden wins, he will not require American NATO allies to increase allocations to the alliance. Russia benefits from this. But it is very unprofitable for Russia to restore transatlantic solidarity, which Biden will do everything possible to achieve after the crisis of confidence in the alliance during the presidency of Trump.

Therefore, at the first stage, Biden's US will most likely not dare to impose new sanctions against the NR-2, taking into account the huge involvement of European NATO member countries in the project. But there can be no illusions: such a step can only be considered as a tactical, but not a strategic move.

Biden has said many times that Russia has been and remains the main threat to national security of the United States. The last such statement was made on October 26. "Well, I think the biggest threat to America right now in terms of breaking up our security and our alliances is Russia". "Secondly, I think that the biggest competitor is China", -  the Democrat said. His words are quoted by Izvestiya.

Moreover, regardless of the winner of the elections, the pressure on our country will be continued through discrediting its achievements and developments. The most striking example is the Russian vaccines against the coronavirus that have been successfully tested. But the developments of our scientists and doctors are being muddied, and it's not about people's health, but whose pharmacists will have time to get the market.

To sum up, no matter how many people say that Trump is preferable for Russia as President, all the candidates there are actually Bidens. The only question is how far each of them is willing to go in their anti-Russian hysteria.

Observers have already recorded a number of violations in the elections, and experts consider the electoral system itself archaic and not democratic at all. Meanwhile, it is presented as the apogee of democracy and the opportunities of every citizen. According to the Chairman of the State Duma Vyacheslav Volodin, the US elections are like a staged show. His words are quoted by the 360 TV channel. But the consequences will be real and our country must be prepared for them.