Diplomacy on the contrary: how the United States "agrees"

Washington reduced the diplomatic service to the role of chain dogs, threats, blackmail and bribery of not only states, but also private companies to support criminal anti-Russian policies.

According to the correspondent of The Moscow Post, yesterday at the traditional briefing of Foreign Ministry spokesman Maria Zakharova, several theses were voiced that are extremely important for understanding the efforts of the so-called international community to pressure Russia. It was primarily about the departure of many foreign companies and projects from the country, allegedly due to the fact that the Russian Federation is conducting a special operation to protect the LPR and DPR from Ukrainian security forces and nationalist battalions.

Answering a question from our journalist about the work of diplomatic departments, Maria Zakharova noted that all our diplomats continue to work in sweat, despite the anti-Russian hysteria deployed in the West at the state level.

Now there is a large set of problems, our citizens need help. First of all, this is help with returning to their homeland or simply moving, because it is known that all EU countries have closed their skies to Russian aircraft, ports to Russian ships. The United States, Great Britain, Canada, Australia, a circle of Anglo-Saxon states traditionally hostile to Russia, also did the same earlier.

At the same time, Maria Zakharova found it difficult to answer the question whether the Russian Foreign Ministry is going to increase the composition of embassies and consulates general in the same South America or other regions, while in other areas, primarily in the United States, our diplomats continue to be squeezed out of the country.

These the situation initiated by the American side is close to stalemate. Not further, as on January 30 the Russian diplomatic mission in the USA was reduced by 27 diplomats that couldn't be apprehended differently, than a hostile step from Washington. However, it became only continuation of that undeclared diplomatic war which continues several years. More widely - from the moment of integration of Crimea into the Russian Federation.

Besides, as I wrote Gazeta.ru earlier, in the beginning years sounded again threats to send the Russian ambassador, ignoring Kremlin appeals to zeroing of all collected restrictions.

At the same time our former western partners show the surprising hypocrisy which isn't deprived, however, of quite diplomatic raid. For example, in the beginning 2022 the American side said that at our diplomats it is banal business trip term comes to an end, and I demanded expulsion of 55 employees of embassy. That is after expulsion of 27 diplomats 28 more have to leave the country till July. And it in the conflict situation, most difficult for both countries, when diplomatic efforts are necessary, more than ever.

It is, of course, not a so isolated case. It is a system. And all constructive efforts from the Russian side to continue normal dialogue on the basis of mutual respect are simply ignored.

In 2020 when the attempt to squeeze out our diplomats from the USA and not only the USA became already absolutely boorish, the ambassador of Russia in the USA Anatoly Antonov urged the American authorities "to cease to dissemble" and to resume equal mutually respectful dialogue, including to return at last to normal practice of issue of visas.

What as a result? As a result he was shortly forced to leave for Moscow on consultation, and returned only several months later. What does it speak about? That the USA isn't going to agree with Russia.

To agree in their understanding - to press through own interests. Similar pressure is put not only upon public authorities of any given country, but also upon corporations, private business, leaders of public opinion. Certainly, not without participation of intelligence agencies and under the threat of problems.

My yours not to understand

In this sense an indicative situation with leaving of a set of the foreign companies and brands from the Russian market. For many - "leaving" in quotes. And this topic was also in detail covered by the Russian Foreign Ministry spokesperson Maria Zakharova.

We will remind that after the begun special operation of the Russian Federation on Donbass many states closed the sky for our planes, closed ports, refused new investment projects. And it is obvious that it was made under pressure of the same Washington, Brussels and London. These are financial centers of the Western world, they have enough levers to incline to any given decision of the clients. Only these decisions often just damage to those who accept them.

And here complexity. As Maria Zakharova speaks, to our diplomats sometimes not easy to understand this flow of decisions on one simple reason - isn't clear at all whether real it decisions, or is just the declaration.

For the last weeks Russia was left by a set of the western brands, large car dealers, such as, Volkswagen, BMWs stopped shipment of the cars to Russia and also delivery of spare parts. Besides, from the country solved roofing felts on a constant basis, whether it is temporary, to leave such large companies as Apple, IKEA, McDonald's and others. Nearly half of all large foreign brands.

Meanwhile, meanwhile the Russian diplomacy doesn't hurry with sharp estimates and reactions. The reason simple - many of these decisions of the western companies and many states have the imposed character, they are extremely not favorable by him. Especially it is relevant for the energy sector and the aviation industry, air transportation.

"At us even in many respects can't identify their decisions. This decision, this declaration of intent, this final decision, this temporary solution, is just the declaration with designation of a position? It is their position, or a collective position - it is offered? For what time? In general nothing can be understood, - Maria Zakharova noted.

According to her, similar statements sound constantly, and constantly change. The companies leave the Russian market, leave temporarily, already think of return. Zakharova is convinced - it occurs because decisions are imposed to them from above, they can't just motivate them. And, respectively, to be responsible for them for them too it is problematic - but it is necessary to answer.

This morning it became known that McDonald's, IKEA, Apple, Volkswagen, Microsoft, Toyota and others (a total of 60 enterprises) are included in the list of companies that can be nationalized in Russia. This, in particular, was told by the head of the Public Consumer Initiative Oleg Pavlov.

"The total volume of obligations of these companies to citizens, the state and counterparties is more than 6 trillion rubles. Exactly this amount is equal to their revenue in Russia over the past three years. Falling into the anti-sanctions blacklist means for the offending company and its management the implementation of the following risks: the seizure of accounts and assets, the introduction of external management, the nationalization of property, "Pavlov said, Izvestia quoted him as saying.

According to the sources of our publication, such an initiative at the first stage is designed only to "understand" these structures, which are clearly not profitable to leave Russia. In the case of the same MacDonald's, there is no real departure - restaurants only suspend their activities indefinitely, even maintaining their salaries. The same with Ikea. Well, if they really decide to break their obligations and make a similar demarche - and even at the direction of the United States, then there may not be any moral restrictions on the nationalization of their property here in Russia. 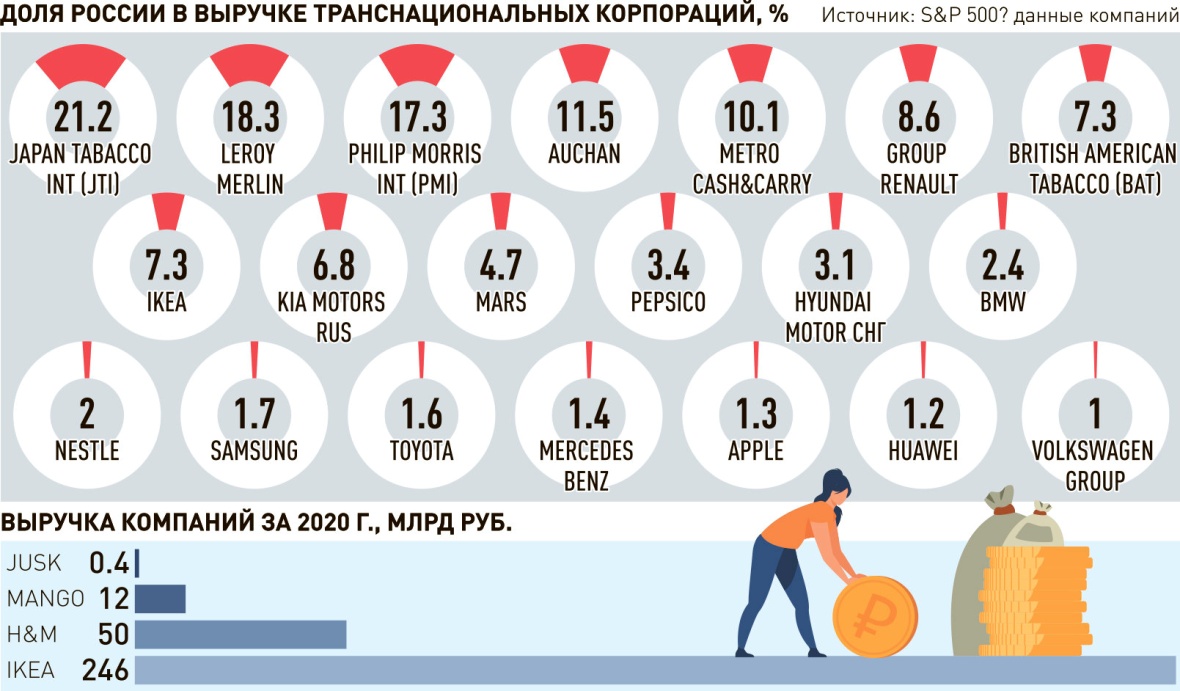 Many companies earned up to a quarter of their revenue in Russia, this is a lot. Their departure is forced and under pressure, but there is still an opportunity to return. Infographics "RG "/Leonid Kuleshov/Olga Ignatova

Now everyone is waiting for the "storm" to pass - namely, a massive information and diplomatic attack on Russia in order to punish it for conducting a special operation in the Donbass. It did not work out to force Russia to change its policy in the past eight years, it will not be possible to do this now. But in Europe and the United States they know how to count money, and as the operation is completed, more and more of yesterday's "refuseniks" will return and will agree to continue stable and highly profitable work.

Only who said they'd still be there by then? After all, there is no holy place empty, instead of Coca-Cola - there is a kvass, and in the same Donetsk instead of BigMac they have long been selling DonMac - and believe that it is no worse, except that it is not so harmful. It will be the same with gas, and with oil, and with air flights, and with everything else. And who's in the downside?

30 December, 7:49
Maria Zakharova: the relations "as before" with the West won't be