The murder of Shinzo Abe could be revenge for his loyalty to Russia.

Former Japanese Prime Minister Shinzo Abe died on July 8, at the age of 68.

This happened at the hospital of the Medical University of Nara. Abe was speaking in that city in support of the ruling party's candidate ahead of elections to the upper house of Japan's parliament on July 10.

The attack on the former prime minister and arrest of the suspect was caught on television cameras.

The photo shows how an unknown person, who, judging by the clothes, clearly does not belong to the group of escorts, managed to come close to his victim from the back and fired a shotgun twice.

"When the ex-prime minister was hospitalized, he was conscious and responded to the speech," the NHK television company said. Doctors fought for his life, but wounds to the right side of the neck and left collarbone were fatal. 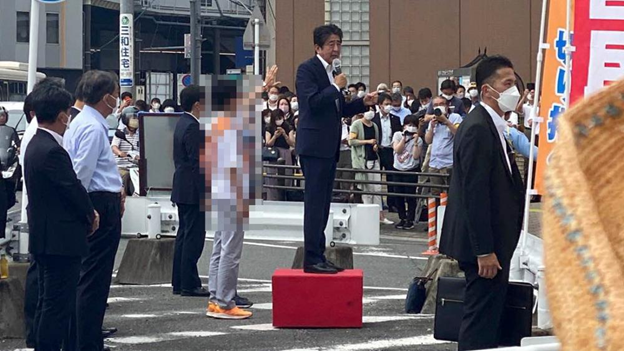 According to Nihon TV TV channel, 42-year-old Tetsuya Yamagami who served in naval forces of self-defense of Japan earlier was the attacker. It is reported that he got demobilize in 2005. The weapon used during attack was self-made. During arrest the criminal didn't show resistance. He acted alone and allegedly "was dissatisfied with the former prime minister".

The prime minister of Japan Fumio Kishida hastily returned to Tokyo from pre-election actions. He called firing "mean and barbaric". According to him, against the background of the incident of decisions on the upcoming elections wasn't accepted yet, but political parties suspended propaganda.

Abe, when attacked him, supported by the performance one of candidates of the Liberal Democratic Party (LDP). Murder cast Japan into state of shock. "I am deeply shocked" — the governor of Tokyo Yuriko Koyke at a regular press conference which took place to the announcement of Abe's death said. "Irrespective of the reason, such mean act is absolutely inexcusable. This insult of democracy", - the politician said.

Over the past half-century attacks on politicians in Japan happened. In 2007 the gangster shot the mayor of Nagasaki. In 1936 when the prime minister was killed, the far right military tried to organize a coup.

Shinzo Abe is a hereditary politician that in Japan not a rarity. In July, 1993 he was elected the deputy of the House of Representatives from LDP. His father is Sintaro Abe was the Japanese Foreign Minister (1982-1986), his grandfather of Nobusuke Cissie headed the Japanese government (1957-1960).

In November, 1982 Shinzo Abe became the personal assistant to the father, the influential member of parliament who was designated in the late eighties in prime ministers. As the assistant in January, 1991 he accompanied the father on a trip to Moscow. Ab Sr. Mikhail Gorbachev planning at that time the visit to Japan accepted.

During the visit of the president of the USSR to Japan in April, 1991 the joint communique included the provision on intention of the parties to continue negotiations on normalization of the relations and on peaceful settlement, including territorial questions. The joint statement of April 19, 1991 included the fact of existence of a territorial problem. In the statement it was specified that "the peace treaty has to become the document of final post-war settlement, including permission of a territorial problem."

Years later, Shinzo Abe continued business of the father, supporting strengthening of ties with Moscow. He was the prime minister of Japan twice: in 2006–2007 and 2012-2020. It was for the first time elected to this post at the age of 52 years and I became the youngest prime minister of the country during a post-war era. In 2007 he resigned for health reasons. In August, 2020 Abe also resigned for the same reason, but after eight years of the management of the country.

He repeatedly said that he intends to solve a problem of signing a peace treaty between Russia and Japan before the expiration of the powers on a post of the head of the government. After the second resignation, said in an interview of The Economist that isn't sorry about meetings with Putin and about work with him. He called the President of Russia the strong leader and the realist. In the same interview he stood up for strengthening of the Japanese-American military alliance and "joint access" to the American nuclear weapon on model of Germany.

I supported strengthening of ties

Abe had strong friendly relations with the Russian President Vladimir Putin. Arrangements on cooperation in power and on joint economic activity on the South Kuril Islands became a result of their efforts. Their realization was suspended in the spring of 2022 against the background of the sanctions imposed against the Russian Federation in connection with SVO Russian Federation in Ukraine.

The Minister of Foreign Affairs of the Russian Federation Sergei Lavrov expressed to Japan condolences in connection with attempt at Abe. He told that he learned about it during the meeting of Foreign Ministers of the countries of the G20 in Indonesia. The Russian Foreign Ministry spokesperson Maria Zakharova called attempt at Abe terrible crime and the act of terrorism.

The President of Russia Vladimir Putin expressed condolences to mother and the spouse of the ex-prime minister of Japan Shinzo Abe. "The hand of the criminal tore off life of the outstanding statesman, a long time heading the government of Japan and it is a lot of made for development of good neighbourhood between our countries" — the president in the telegram noted.

He emphasized that he supported regular contacts with Abe in which its were fully shown "great personal and professional qualities". Putin wished firmness and courage to the ex-prime minister's relatives "in the face of this heavy, irreplaceable loss".