Dehumanization and dementia: what else does Biden have for Russia?

The American leader is increasingly falling into senile insanity and dementia, demonstrating to the whole world his inadequacy. At the same time, the West continues to sternly put pressure on Russia, trying to put it up as a monster.

Our former Western partners continue to demonstrate the height of cynicism and the lack of diplomatic tact. On the eve of US President Joe Biden, answering a journalist's question, called the President of Russia a war criminal. The situation, of course, concerned a special military operation to protect the republics of Donbass, which our country began on February 24.

It would seem that thousands of such insults are now flying at the Russians - thanks to the false Western "media." And yet to hear this from the head of state, which over the past 20 years has invaded and destroyed almost a dozen countries, is simply amazing.

Where begins and ends the mind of the owner of the White House tried to figure out the correspondent of The Moscow Post.

Spokesman for the President of Russia Dmitry Peskov called Biden's rhetoric inexcusable. But what is the irony - after all, Joe Biden has shown miracles of "diplomatic tact" before, and called Vladimir Putin a murderer. This did not prevent him from having many telephone conversations with him, to enter into a dialogue on strategic stability. And, as it later became known, even indirectly apologize for your statement.

Then Vladimir Putin seemed to "understand" him - he is not at all offending, emotions only interfere with the matter. I understood in the sense that in the United States Biden is strongly pressed by political circles demanding the blood of the Russian president, and Russia as a whole. And it seems that Biden was ready to shake off any stupidity - with the difference that he did not, with the blood of thousands of Afghans and Iraqis on his hands, distribute similar epithets to someone.

Even more cynical, his statements look against the backdrop of the US flight from Afghanistan - a country that the States have occupied for almost 20 years. There really were many war crimes for which the leadership in Washington should be recognized as war criminals.

Recall only one of the last, but just egregious episodes. In the very last days of the evacuation of American personnel, the US armed forces continued to launch airstrikes on, as they themselves claimed, terrorists. As a result of one of these strikes (from a drone), a family of 10 people died, which had nothing to do with terrorist activities.

Just covered ten people with an airstrike. And after the Pentagon conducted an investigation, following which it recognized the drone attack as erroneous, and the head of the department, Lloyd Austin, apologized for this incident. Nevertheless, violations of the law were not seen in this and none of the military was punished. Think about it - killed ten people, admitted it, but no one was responsible. And who's the war criminal?

Accordingly, the victims of this real war crime were presented not by the residents of Donetsk, but by the Kiev, but by Russia. "Everything is good for the sake of shocking information in an anti-Russian threat. And nobody cares to the truth. Everyone serves one side of the barricades, "said Russian Foreign Ministry spokeswoman Maria Zakharova in her telegram channel. 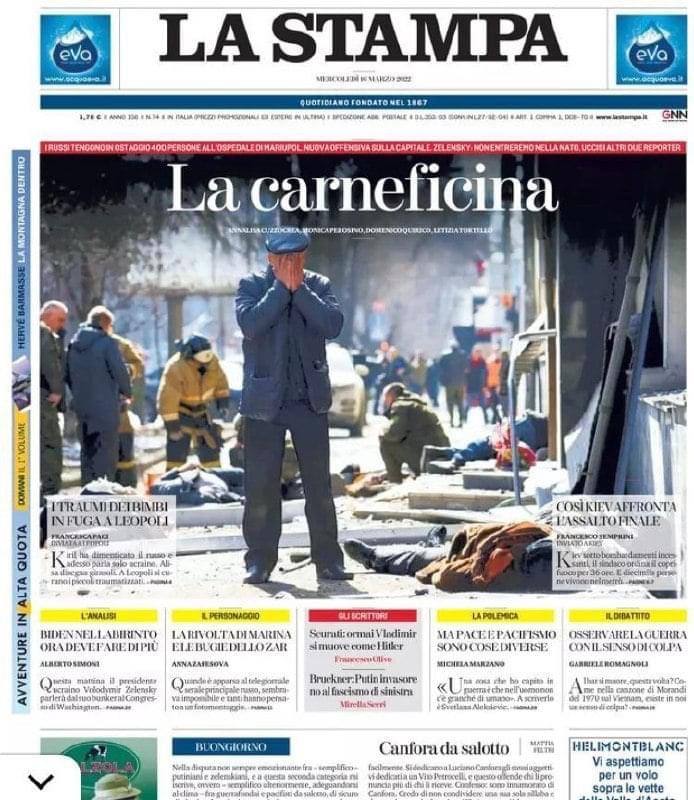 With such an advance came the Italian La Stampa - Donetsk was issued for Kiev. The forgery was instantly noticed by the Italians themselves, but no one changed the cover and did not apologize. Photo: La Stampa

By the way, why is there more and more such stuffing? Here you can attribute staged photographs from the Mariupol hospital, where there have been no patients for a long time, but the base of the nationalist battalion Azov (a terrorist organization, banned in Russia) is equipped? The only victim (from a blow to an allegedly crowded hospital!) Was a young woman in labor.

True, in the end it turned out that this is a local Instagram star, which was slightly "painted" for a picture for the Western media, and its very appearance on the ruins was a simple performance. Is it a joke - no one could find more killed or wounded civilians there, simply because they were not originally. But who in the West cares about this truth? The main thing is to present Russia as a monster.

And at the same time, the clients of the American administration, namely the Ukrainian leadership, journalists and the elite as a whole, continue to bear such a responsibility for which in any decent society they would receive deadlines. For example, the famous Ukrainian propagandist Dmitry Gordon, who escaped from Kiev in the early days of the special operation, believes that an atomic bomb should be dropped on Russia.

How impeachable this person is is another question, but this resonates with thousands and tens of thousands of people pumped with propaganda who are trying to target Russia. No one convicted Gordon, of course. And how can you not recall that even before the start of the special operation, Ukrainian officials, up to President Zelensky.

Another Ukrainian patriot on the television channel "Ukraine 24," owned by Lviv Mayor Andrei Sadovoy, referring to a fascist figure, a war criminal, "Holocaust architect" Adolf Eichmann, calls for the murder of children of Russians. Denies Russia and the Russian people the right to exist. This is a frankly Nazi, hateful position. And no one pulled him, did not punish him, did not stop him, did not condemn him either in Ukraine, or in Europe, or in the United States.

This host is Fakhrudin Sharafmal. You must remember that name. We are convinced that the denazification going on in Ukraine should not bypass this figure. They also believe in the Investigative Committee of the Russian Federation - its head Alexander Bastrykin has already instructed to give a legal assessment of the calls made live on the Ukrainian television channel. About this writes Lenta.ru.

Russophobia dementia is not a hindrance

All this in the West is perfectly seen, well known. As they knew and saw, eight years of the destruction of Donbass, discrimination of the Russian-speaking. As seen, organized, patched murders and invasions around the world. And now they continue to pump Ukraine with weapons and ammunition - only in order to inflict as great losses as possible on Russia and the republics of Donbass.

Yesterday, the United States signed a new package of military assistance to Ukraine for $1 billion. It included hundreds of anti-tank systems, MANPADS, body armor, small arms. The order was personally signed by US President Biden. However, its adequacy raised serious questions.

And this is not only about the frankly delusional definition that he gave to the Russian leader, but in general in his ability to act as a politician and person. And especially, somehow, a person under 80 years old, and it seems to him that it is simply purely physically difficult to communicate with the press. And to conduct work as a whole. We are talking about a man who is responsible for the nuclear arsenal of a huge state!

Recall how last summer he could not get into the White House - he simply confused the entrances, despite the clues of his advisers. Apparently, Mr. Biden has dementia, or something worse. But the interview with Joe Biden, where he confuses words, cannot understand the interlocutors, adequately assess the situation, is no less eloquent. 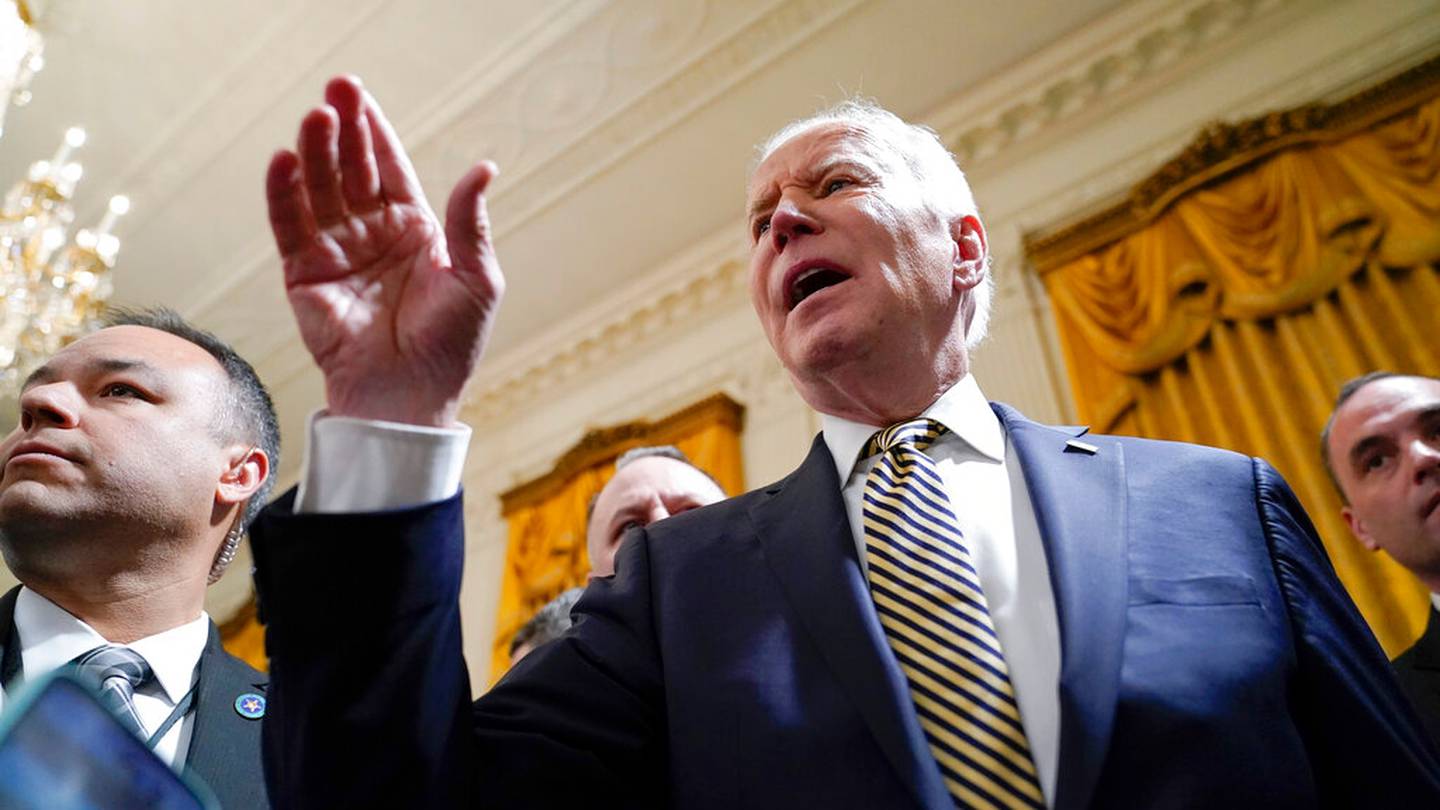 Joe Biden once again "went out for buoys," but the question is, how capable is he at all? Photo: wftv.com

What such leaders can bring the world to - we see today. With the only caveat that the current crisis is not the work of one Biden, but of the entire North American, wider - the Western establishment, which considered itself winners in the Cold War.

But the world is changing, it is no longer unipolar. The architecture of world security is also changing. And no matter how much the United States allows fakes and denigrates Russia, as well as their sattelites in Europe, the truth will still prevail. The process is already underway - ask the liberated residents of Mariupol.