Decolonization of the "limitrophes" and the lot of the "dog"

Russophobic hysteria in the Baltic states is not only ugly discrimination, but also an attempt to earn political points within the EU against the background of colossal efforts aimed at destroying our country.

Tonight, the Estonian authorities stopped allowing Russian citizens into the country with Schengen visas issued by Estonian consular offices. According to Estonian politicians and their "brothers in mind" from the nearby limitrophic countries of Latvia and Lithuania, soon such restrictions should apply to citizens whose Schengen visas were issued in other countries.

What is the role of Estonia and other limitrophes (states formed after 1917 on the territory that was part of the Russian Empire) in the fight against the Russian Federation - in the material of the correspondent of The Moscow Post.

Estonia is rapidly drowning in the abyss of political soldarism and Russophobia, like that dog girl who barked at a large shepherd, literally pouring in from her impunity. But the idea that the wicket (NATO) will always be closed and will rid the dog of the wrath of a stronger animal than herself is a myth.

As an absolute myth, the political and ideological independence of Estonia and the other two limitrophes. They are only running ahead of a huge Russophobic steam locomotive, which can only be derailed by the success of the Russian special operation to protect Donbass and a tough political and diplomatic reaction.

According to a number of experts, today a new, alternative center of power is being formed in the EU, no longer subject to tough economic dictates from major European bonuses - Germany, France, Italy and Spain.

This is Poland and the Baltic countries blocking with it, plus the born Eastern Europe. And all this is under the umbrella of Euro-Atlantic integration. More precisely, a new form is not a cumbersome NATO, but a more flexible and even more Anglo-Saxon-led alliance with Great Britain and the United States.

That is, they decided to oppose old Europe with its relations with NATO and a bunch of obligations to Europe with a new one: Poland and Great Britain (now not part of the EU) are "blocked" with the Baltic states and are drawing modern Bandera Ukraine into their orbit. Coupled with weapons pumping and finance, it is an alternative powerhouse that, amid a tough fight with Russia, has increasingly dictated the agenda to other European states.

And Estonia's ban on entry to Russians (which was no longer supported and even condemned in Germany) is such an attempt to set the tone for the anti-Russian units of the European elite itself. The point is not even so much in hatred of our fellow citizens, who are so strongly impregnated today by the descendants of the unfinished "forest brothers" in the Baltic states.

To strengthen the political counterweight and its influence within the EU, the same Britain needs new regional alliances. Back in May, the Italian newspaper Corriere Della Sera published a resonant article about London's plans to seriously change the political alignment in Europe.

According to the publication, British Prime Minister Boris Johnson intends to create a new political, economic and military alliance on the continent as an alternative to the EU from countries that do not trust Brussels too much and are dissatisfied with Germany's reaction to Russia's actions.

Johnson left the political arena, but in fact this idea is not new, and does not belong to him at all. And now, as economic and political problems grow in the EU and confrontation with Russia deepens, this idea will move more and more.

We see similar processes in Asia, where instead of a rotting NATO to confront the PRC, a new entity is entering the arena - the military-political alliance AUKUS - the USA, Britain and Australia.

At the same time, it is in the Baltic states that the ideological, political, ideological "fist" against Russia is concentrated. Or at least a fist, because this gathering of those wanted in the Russian Federation for various crimes of oppositionists can hardly be considered a real force.

Every year in the same Vilnius there are meetings of political losers who could not rock the situation in their homeland and are forced to live on a short leash with their older comrades. And on the ration, like the same Mrs. Svetlana Tikhanovskaya - a failed Belarusian oppositionist who fled the country after the failure of the coup attempt.

By the way, back in November 2021, the Lithuanian Sejm was outraged by the costs of maintaining Tikhanovskaya and her team - it turned out that this costs Lithuanian taxpayers 400 thousand euros a year. About this wrote "Gazeta.ру".

Once again, Lithuania quite officially recognizes that they sponsor Belarusian putschists from the state budget.

The event will be attended by Latvian Defense Minister Artis Pabriks, former Estonian President Toomas Hendrik Ilves, adviser to the head of the office of the President of Ukraine Oleksiy Arestovich, founder of Hermitage Capital Management Bill Browder, former US Ambassador to Russia Michael McFaul, as well as representatives of the Government of Lithuania, Poland and a number of deputies of the European Parliament.

Together they will decide what to do with Russia. Although their plan has long been known: provoking political and social instability, organizing illegal protests and riots in the field to combat the "bloody regime." And then - inciting national hatred and separatist sentiments and the collapse of Russia into many ethno-national quasi-state entities.

What does this mean in practice? Russia's disintegration and endless, bloody civil war. This is exactly the fate (following the example of Yugoslavia) that opposition citizens are preparing for us - and this week the criminals fed by our former Western partners are.

If someone thinks that this is a local confrontation, paid for by the "donations" of unconscious citizens, he is very mistaken. They talked about Tikhanovskaya, and if we take our recorded "oppositionists" like Lyubov Sobol or Vladimir Milov (recognized in Russia as foreign agents, included in the list of extremists), then they do not even seem to hide their special relationship with our former "partners."

All this is organized, sponsored, fed from Washington, London and Brussels. Just a few weeks ago, an event was held in the US capital - a briefing by the US Government Commission on Security and Cooperation in Europe. It was called "Decolonization of Russia."

The briefing (in fact, it was something like a conference that was paid for from the American budget) discussed ideological and organizational work to undermine the unity of our country. Specifically - the strategy and tactics of organizing a coup in Russia with the subsequent removal of legitimate authorities and the further division of the Russian Federation on administrative borders on an ethnic basis. 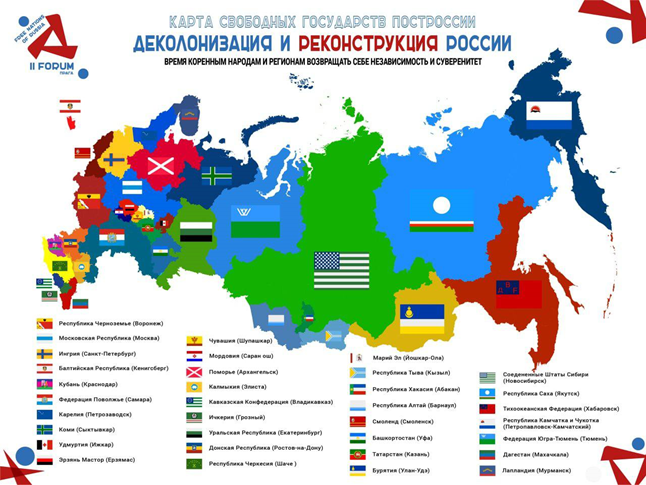 Such a fate is being prepared for us by fugitive "oppositionists" and former Western "partners." Photo: discovery sources

The fact that this means nothing more than a bloody civil war like the one they wanted to inflate from the Chechen crisis is well understood there. This is exactly the goal for which our Western "well-wishers" and their opposition "friends" who fled from Russian justice are working.

And when you understand this "high" goal, you will not be surprised by the yapping of a "dog girl" from the Riga seaside - to God, without this "yapping," dull attempts to ruin Russia would look completely sad.