Lukashenko's statements on nuclear weapon and the Crimea mark final turn of Belarus on the East towards Russia and the Union State. There is no road back.

As the correspondent of The Moscow Post reports, the president of Belarus Alexander Lukashenko burst in the whole series of loud statements from which now, has to be Europe and the USA worry.

In an interview to the head of IIA Russia Today Dmitry Kiselyov the Belarusian leader actually recognized the Crimea as Russian and also suggested to return nuclear weapon on the territory of his country in response to actions of NATO. We will specify that it is about the Russian nuclear weapon. But even with this amendment to tell that it excited wide western and not only, the public - not to tell anything.

In recent months around Belarus already real "rush". It is connected not only about the migration crisis (which is thought up in Brussels and Washington) how many with the general failure of strategy of the western countries across Belarus. The attempt of a coup last year failed. Lukashenko under sanctions turned to Russia even more.

As a result integration processes between Russia and Belarus amplified and accelerated, and here we already see the signed all 28 road maps of the Union State approved by Vladimir Putin and Alexander Lukashenko. As they say, there was no happiness, on misfortune (pressure and sanctions upon Belarus) helped.

At the end of 2020 Lukashenko noted unhealthy activity of forces of NATO at his borders. Today we hear and absolutely outstanding statements - that nuclear weapon of Alliance can be deployed east of Germany that couldn't be imagined at the time of disintegration of the Soviet Union.

Earlier, November 19, the NATO Secretary General Jens Stoltenberg declared a possibility of alliance to place the American nuclear weapons in Eastern Europe if Germany refuses to accept them in the territory.

The Deputy Minister of Foreign Affairs of the Russian Federation Alexander Grushko said in reply that the similar step is gross neglect of arrangements between Russia and NATO as the alliance undertook not to develop nuclear weapon in the territory of new members.

On the same day the Russian Foreign Minister Sergei Lavrov noted that Russia won't close an eye to the worst provocations from the countries of NATO and the EU. According to him, the Russian Federation is ready to dialogue with the West. It is written by Izvestia.

Now to borders of Russia and Belarus all new and new forces of NATO are drawn up. Poland strengthens border, and the sky near the Union State (including, from the Black Sea) patrol the strategic bombers of the USA capable to carry nuclear weapon. In response to it into the sky over Belarus there was also the Russian strategic aircraft.

Yesterday at the forum "Russia Calls!" Vladimir Putin made several important statements, and once again presented the vision of the relations with NATO and the West, told about "red lines". The message was the same there is the capacity of NATO approaches our borders. Soon we can direct at each other hypersonic weapon. "Where we go?" - the President asks.

Concerning Lukashenko's remark about nuclear weapon: certainly, about his return to this country out of the question. And first of all because of a position of Vladimir Putin who many times proved the true and sincere adherent of non-proliferation regime. And here it isn't important any more whether there will be weapon in itself Russian, or will belong to Belarus.

The speech about the principle, and even not about Lukashenko with whom in the past the Russian authorities had different negotiations. Will give him in hands a trump in the form of nuclear weapon nobody. Hardly Russia will give such trump to someone. Not to mention that it will cause a new round of sanctions pressure and arms race.

But speaking about nuclear weapon, Lukashenko raises the stakes, and lets know that not to stop process of geopolitical and military rapprochement of the Russian Federation and Belarus any more, and not to interrupt other vectors. Lukashenko will go a bull further rates whereas Putin, on the contrary, continues to act as the stabilizer and a mediator of the relations of RB with the EU, the USA and NATO.

Exactly the same situation with Crimea. Alexander Lukashenko did not just not recognize Crimea as Russian before. He did not make public statements in support of Russian politics. To the last, Belarus tried to remain a neutral and friendly platform for both Russia, Ukraine, the EU, and the rest of the world community on the "Crimean issue."

Lukashenko gave a platform for a peaceful solution to the civil war in Donbass - Minsk. He helped with the exchange of prisoners, and at the same time helped economically distressed Ukraine. What did Lukashenko receive in response - not from Petro Poroshenko, but from the new "green power" of Ukraine, led by Volodymyr Zelensky? Non-recognition as president, sanctions, pressure, military presence at their borders.

The non-recognition of Crimea by Russia was the main factor and cause of acute criticism of Alexander Lukashenko in the Russian political community. Now, it seems, this reason for criticism will not be.

Before the coup attempt in 2020, Lukashenko's tactics were called an attempt to sit on two chairs and balance between the West and the East. To a certain extent, it was. But this did not help Lukashenko to become his own in the eyes of Western democracies - they still tried to overthrow, heating and using popular discontent. And Ukraine was the first to run to ban aviation after the detention of an opposition journalist.

So what to wonder about now? "We all understood that Crimea is de facto Russian Crimea. After the referendum and de jure, Crimea became Russian, "RIA Novosti quoted Lukashenko as saying.

What does this mean in practical terms? All in all, nothing. Pressure and accusations against Russia and Belarus will continue, Lukashenko's statement further demonizes him in the eyes of the West. Well, in Ukraine, he has long been presented as an enemy of the Ukrainian state. And this despite Lukashenko's agreement to sell electricity to a distressed country, and despite the fact that severe cancer patients from Ukraine continue to be taken for treatment to Belarus.

At the same time, the recognition of Crimea as Russian has a serious symbolic significance. This is not official recognition at the diplomatic level, but the last step before it. Soon, the head of Belarus may be in Crimea at the invitation of Putin - Lukashenko himself spoke about this recently. And after that, statements at the level of the Ministry of Foreign Affairs of Belarus and the Government may follow.

In the situation with Alexander Grigoryevich and his attempts to sit on two chairs in Europe, and with it the United States and NATO (unhappy Ukraine and Poland, we will leave separately behind brackets) reap the benefits of their own stupid, short-sighted and ineffective policy. 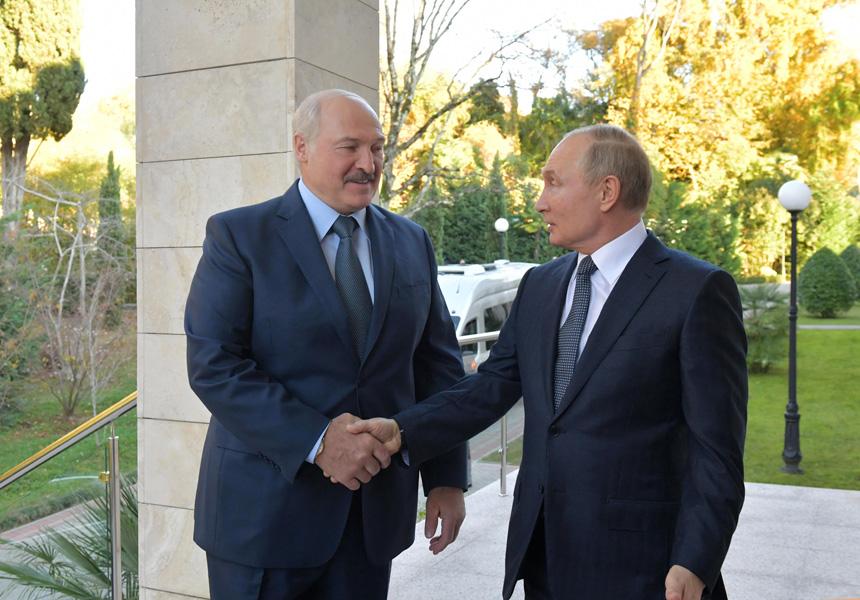 Will the next meeting of Alexander Lukashenko and Vladimir Putin be held in Crimea?

Now, it seems that all that remains for them is to call Svetlana Tikhanovskaya in Vilnius and express their concern. True, she may soon be kicked out of Vilnius - the deputy of the Lithuanian Sejm Remigijus Žemaitaitis was recently indignant at the fact that her country could spend 400 thousand euros a year on the maintenance of Tikhanovskaya, and she could not say thanks. About this wrote Lenta.ru. So soon Tikhanovskaya may be asked from Vilnos. You'll have to call Poland.