Course on Russia: South Ossetia will not miss a historical chance?

The weakening of the United States, NATO and Europe allows the territories under the protection of Russia to accelerate rapprochement with our country - there are no other options to ensure security and the stable development of state institutions.

Russia recognized the independence of South Ossetia, as well as Abkhazia, in 2008, after an aggressive attack by Georgia on Tskhinvali. Then Georgian politicians and the military called it the "restoration of constitutional order," they wanted to crush the resistance of the South Ossetian militia and the peacekeeping contingent of the Russian Federation located there to the accompaniment of the "hail."

Until now, this attack is considered one of the most treacherous in the post-Soviet space. First of all, because the Russian forces there had a UN mandate.

On the night of August 8, 2008, Georgia introduced troops into the region. In response, then-Russian President Dmitry Medvedev announced the start of an operation "to force peace," saying that the Russian military would conduct a peacekeeping mission and protect civilians. After five days of hostilities, Russia ousted the Georgian military. Mikhail Saakashvili, who then led Georgia, called the territories of the republics occupied by Russia and announced his withdrawal from the CIS.

To the displeasure of Mikhail Saakashvili, NATO, on which he so hoped, did not defend him. It was limited to only a couple of anti-Russian statements. And after the conflict, when all the necessary investigations were carried out, the Europeans made conclusions that shocked many consumers of Western propaganda.

In the report of the international commission of EU experts led by Heidi Tagliavini, Tbilisi was blamed for the outbreak of war. Russia welcomed the conclusion of the commission, although it was not devoid of ambiguities. About this writes RIA "Novosti."

The authors of the report concluded that at first Russia's military response to Georgian aggression was "legal," since the actions of the Russian Federation were defensive, but the subsequent retaliatory actions of the Russian military went beyond "reasonable borders." What exactly is meant by going beyond reasonable boundaries is not clear. But everyone remembers well that Russian tanks stood near Tbilisi, and could easily take the city. But the Russian leadership abandoned any such plans - the task was only to protect South Ossetia and Abkhazia. 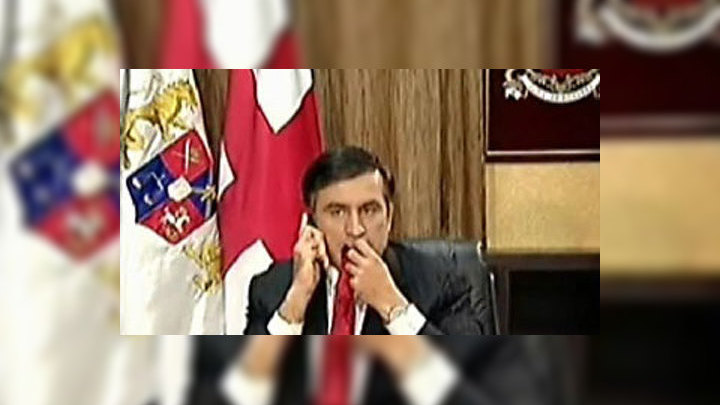 Footage of Saakashvili chewing a tie, nervous before speaking on TV about the situation with South Ossetia in 2008, circled the world. Photo: vesti.ru

However, events that have occurred cannot be considered as ordinary action. By no means. In 2007, Vladimir Putin spoke in Munich, where he spoke about the inadmissibility of unilateral actions in the international arena. And in 2008, Russia finally showed subjectivity as a great power. The attack on our peacekeepers was a test for strength - will Russia "eat" it?

Many did not doubt that if the Georgian side was successful, the sad fate would befall not only South Ossetia, but also Abkhazia. And instability will try to sow in the North Caucasus. But Russia could not endure such a thing at its borders. What, according to a number of political experts, in practical terms returned itself to the "big game" after two decades of weakness and problems.

However, experts who are already sleeping and see the entry of South Ossetia into the Russian Federation can still cool the fervor a little. Indeed, if this decision is supported in a referendum, it should also be approved in Russia - both at the legislative and executive levels. Whether this will be done is still a question.

Including because of Russia's relations with Georgia, which will take such a step bayonets. The current Georgian leadership is difficult to convict of sympathy for Russia. However, you will not deny them adequacy: they not only did not support illegal sanctions against the Russian Federation (this would simply bring down the Georgian economy), but also a little earlier they put Mikhail Saakashvili behind bars.

The latter sailed to his homeland secretly in a cargo container, intending to arrange another coup. But after he was forced to go on a diet in the Tbilisi pre-trial detention center, and now he is building messages on social networks, trying to draw the attention of the press.

Statements from Bibilov took place against the backdrop of Russia's continuation of a special military operation to protect the republics of Donbass. What prompted them, of course, was a change in the balance, the beginning of practical actions to rapprochement with Russia from South Ossetia could cause the "Domino effect" for other territories along the perimeter of the Russian Federation, where there are many of our citizens, and who need protection. First of all, we are talking about Abkhazia. And also, of course, about the DPR and LPR.

Russia recognized the Donetsk and Lugansk People's Republics on February 21. The corresponding Decree on the appeal of the Parliament was signed by Russian President Vladimir Putin. On behalf of the self-proclaimed republics in 2014, their heads signed treaties - Denis Pushilin for the DPR and Leonid Pasechnik for the LPR.

A little later, on February 24, the SVO for the protection of the republics of Donbass, international sanctions and so on began. At the moment, most of the LPR and DPR have been liberated from Ukrainian troops. Their complete release is a matter of time. And they also already think that without joining the Russian Federation, it will be difficult to protect people in the future, problematic. Ukraine will never calm down, like its Western patrons.

Therefore, even before the statement of the President of South Ossetia Anatoly Bibilov in the recognized republics of Donbass, there was a discussion about the possible accession to Russia.

On March 27, the Head of the Lugansk People's Republic, Leonid Pasechnik, announced that a referendum could be held in the near future, at which the issue of joining Russia would be decided. As of February 20, 2022, 770 thousand residents of Donbass received Russian passports (250 thousand residents of the LPR - according to June 2021). About this wrote "Kommersant."

As for the DPR, the leader of the republic, Denis Pushilin, has repeatedly made it clear that he sees the future of the young state only together with Russia. And after all the torment of people in battles with the Ukrainian army, there is practically no other option. This is only a matter of time - first you need to kick out the Ukrainian invaders from the DPR. 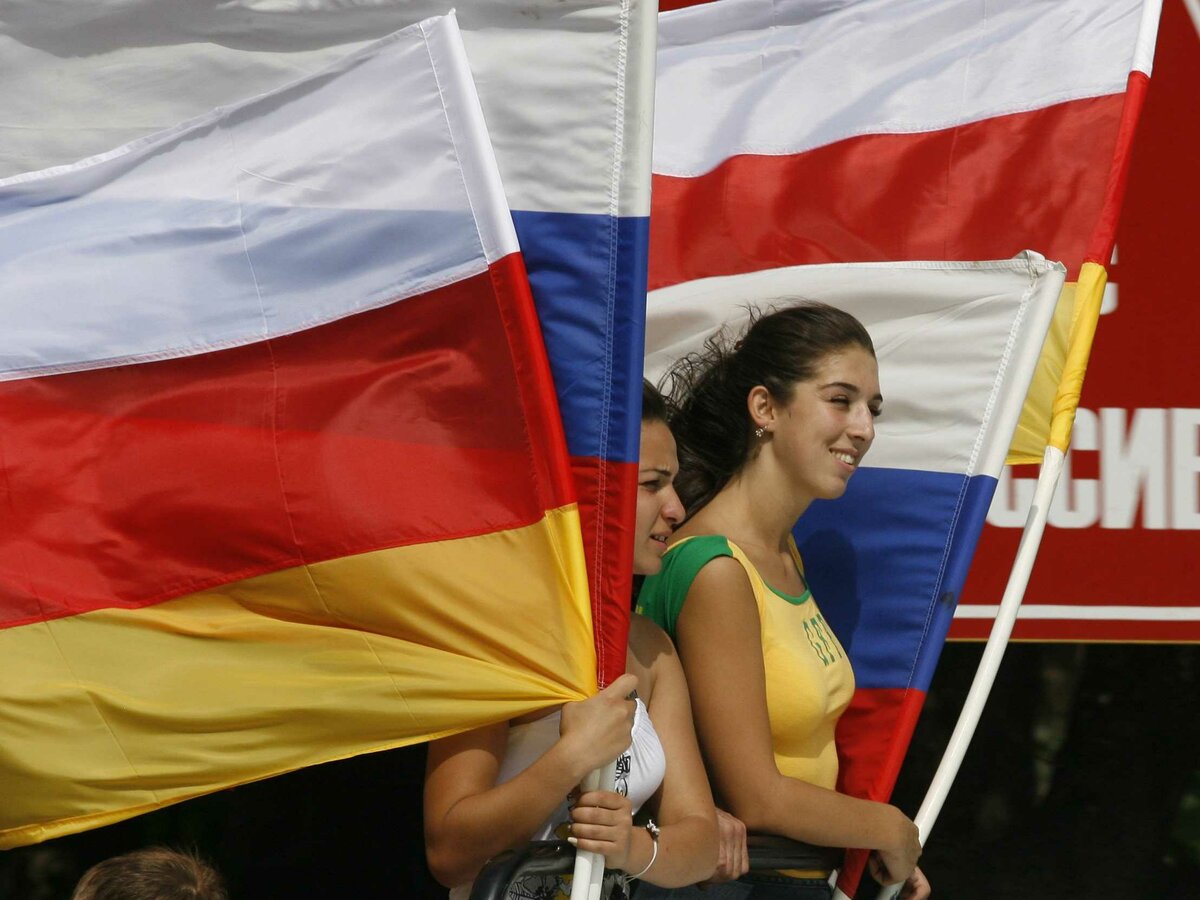 In South Ossetia, no one hid the course of reunification with Russia, but the time seems to have come only now. Фото: vladikavkaz.bezformata.com

There are many Russian citizens in South Ossetia and Abkhazia. Therefore, in any case, the desire to connect with the big Motherland is logical. On the other hand, Russia itself, by virtue of its Constitution (and national identity), is obliged to protect its people. And even more so in a situation of military threat, discrimination and simply harassment, which threatens the LPR and the DPR and their citizens in suspended status next to Ukraine's inflated weapons.

How unpleasant it would be for Ukraine and its Western curators to recognize this, but it was their criminal policies that catalyzed these processes. Even by analogy with 2008 - well, who would recognize South Ossetia if direct aggression had not been committed against it, killing civilians and our peacekeepers.

Ukraine had every chance to resolve the issue with the LPR and the DPR on a bilateral basis, peacefully. For this, there was support in society - for Volodymyr Zelensky, who came to the slogans of the world, more than 70% of voters voted in the second round. But this was not beneficial to the United States, so opportunities were missed.

Now NATO, the United States and the EU have exhausted almost all the possibilities for pressure on Russia. If Russia supports the inhabitants of South Ossetia in their desire to unite with our country, Russia has nothing to "punish." Now the Russian Federation has virtually untied hands, and the West drove itself into this situation.