Catherine is not on them

The genocide in Ukraine enters the terminal stage - with the full approval and support of these actions by the Western patrons of the "square."

A monument to Catherine II and her associates was dismantled in Odessa. The sculptural composition was dedicated to the founders of the city. At the same time, in the eponymous area of ​ ​ Odessa, they also did with a monument to the legendary Russian commander Suvorov, who gained unblemished military fame just in these places during the war with Turkey.

Both monuments will be transferred for storage to the Odessa National Museum, their fate will be decided later. However, it is obvious to all thinking people that the demolition of two key monuments of the city is part of an illegal, openly Nazi policy towards the Russian population, which is being pursued by the fascist regime in Kyiv.

The demolition of monuments dedicated to the general history of Russia and Ukraine, relations between the Russian and Ukrainian peoples began after the illegal coup in Ukraine in 2014. The coup, which ultimately led to the current tragedy, when Russia was forced to launch a special military operation to protect Donbass, and the entire Russian-speaking population of Ukraine as a whole.

Then the so-called. "Leninopad." In different regions of Ukraine, the young people distraught by impunity and unconsciousness poured down monuments to V.I. Lenin, who should be the main character of modern Ukraine. It was Lenin who did the most for Ukraine and Ukrainian statehood, as Russian President Vladimir Putin has repeatedly said.

With light strokes of the pen, he drove huge territories into the Ukrainian USSR created at the beginning of the 1920s, which never had anything to do with the Ukrainians: Donbass, the lands of Novorossiya, including Odessa, pursued a policy of mass Ukrainization of the Little Russian (for the most part, the Russian population).

This was done for one simple reason: to inflict maximum damage on the Russians, their historical memory, flesh and blood of the state, where they were a state-forming people. Taking, trampling this status to strengthen the "class" component, building a class state is what its task was.

And for this it was necessary to strengthen the national identity of the same Ukrainians - in order to oppose them to Russia, to prevent the collection of Russian lands into the Russian Empire. Even if the Ukrainian nation was largely assembled artificially, and Ukraine was the most real "construct," "Frankenstein," where Joseph Stalin later added other territories that had nothing to do with Ukraine.

However, Lenin, who should be the main character in Ukraine, almost a "saint," became the ideological enemy of the rabble that came to power in Kyiv in 2014. After all, at the same time he remained the creator and ideologist of the Soviet state. And his current memorable heirs of the Shukhevichs and Konovaltsy hate almost more than that, now distant and lost forever Russia.

Now there are no monuments to Lenin on the territory of Ukraine. Over the past eight years, there has been a process of demolition and other monuments, changing the names of streets, etc. associated with Russia. Now, in order to go to Babyema Yar in Kyiv - the place of executions of tens of thousands of people, mainly Jews, it is necessary to go through Bandera and Shukhevych avenues.

Could there be something more disgusting, something more cynical, does the modern authorities in Kyiv and their patrons in the West have at least some conscience, is there at least a drop in historical memory?

The same can be said about the destruction of the Russian language in Ukraine, which even under Nazi occupation since 2014 recognized 38% of the population as "square."

It got to the point that the head of the National Security and Defense Council of Ukraine, a native of Lugansk, Russian by nationality Oleksiy Danilov, whose entire family speaks Russian, said that the Russian language should be banned in the country. Where next?

Having discarded emotions, it is quite clear that it is not about tantrums and banal self-assertion of the functionaries of the Kyiv regime. This is a systematic, verified, systemic struggle aimed at destroying the historical memory of Russians on the territory of Ukraine, eroding their national identity, destroying national identity, infringing on national rights.

With the beginning of the Russian special operation to protect Donbass, the process of derusification of Ukraine went into turbo mode. The last covers, restraining factors disappeared, and anyone who dared to raise his voice in defense, for example, the monument to Alexander Pushkin, was declared an accomplice of Russia and, at best, could receive a long prison sentence.

It is also significant that the celebration of Christmas, which most of the Ukrainian military - Orthodox, in fact, people, supported in the Catholic manner, from January 24 to 25. After the Ministry of Defense of Ukraine distributed a series of photographs from dugouts, where the killers and tormentors of the civilian population of Donbass are building decent Catholics.

An important part of the policy of genocide was the destruction of the Ukrainian Orthodox Church of the Moscow Patriarchate. SBU officers have already visited dozens and hundreds of monasteries and churches, where in the worst traditions of the Gestapo they searched for any hint of at least neutral attitude with colleagues of priests from Moscow.

Obviously, it is going to a violent union with a schismatic OCU. And raider seizures of Orthodox churches of the UOC, especially in the west. The Ukrainian SSR has not stopped since 2014.

And at a time when monuments to Catherine the Great and Suvorov were dismantled in Odessa, President of Ukraine Volodymyr Zelenskyy, who everyone speaks Russian at home, spoke in the Verkhovna Rada, where he sang beautiful songs that Ukraine would become a leader in green energy.

Of course, against the background of the systematic destruction of the energy infrastructure of the Russian Armed Forces, there is simply no other option but to rely on the energy of the sun and wind from the "square." It is noteworthy that as a result of the latest strikes, damage was caused not only to distribution networks, but also to generating capacities - for example, the Dnepropetrovsk hydroelectric power station.

A good half of Ukraine sits without light, there are interruptions in the supply of water, steam locomotives entered the railway lines. And this is not another attribute of the upcoming holiday of the new year - this is an urgent need for the transportation of goods.

True, steam locomotives also need fuel - coal, and where to get it if Ukraine has been ironing the Donbass for more than eight years, and has lost a significant number of its deposits of this resource? That's right - to beg from Western partners, without whose support the Kyiv regime, with all its Nazi honor and the fight against monuments, is simply incapacitated. 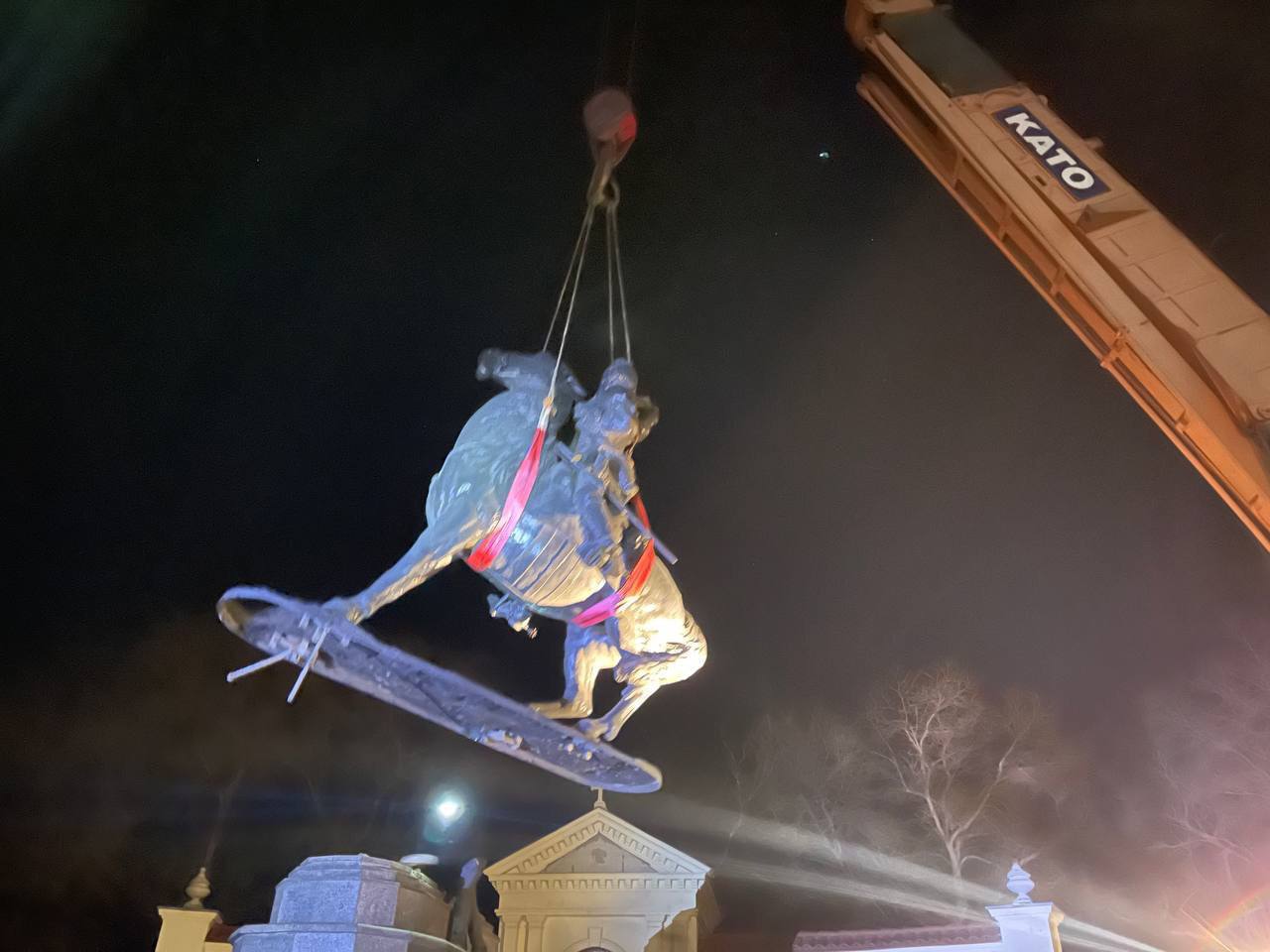 The dismantling of monuments to Catherine the Great and Suvorov is a continuation of the conscious policy of ethnocide and discrimination against the Russian people on the territory of b. of the Ukrainian SSR. Photo: news-odessa.ru

However, until it is destroyed, it can do a lot of trouble. And monuments are the smaller of the problems. Today, thousands of ordinary Ukrainians who do not want to fall into historical unconsciousness languish in the dungeons of the SBU. Tens of thousands and millions in Ukraine hate this regime, which was also mentioned by Russian President Vladimir Putin in the past.

The case in Ukraine must be completed, otherwise this wave of unconsciousness, rabid, not covered by Russophobia, this ugly plague will spread to the territory of Russia itself. Look at least the statements of our non-systemic "oppositionists," entrenched in the Riga sea...