European diplomacy acts on the principle of "hedgehogs pricked, cried, but continued to eat cactus."

As the correspondent of The Moscow Post reports, the scandal connected with the recent visit of the Deputy President of the European Commission, the head of its foreign policy department Josep Borrel to Moscow has not subsided in Europe for many days. It would seem that the heat of emotions should have cooled, because Borrel's negotiations with Minister Sergei Lavrov ended last Friday. But no.

In Europe, one after another, there are critical publications that interpret the results of Borrel's visit as a loud failure of European diplomacy. Moreover, there are calls for him to resign immediately, and Moscow's diplomats are accused of driving Borrel into a trap and forcing the whole of Europe to appear in an unsightly light.

Borrel's visit was connected, of course, with the legal proceedings against the Russian opposition leader Alexei Navalny. All this story in the foreign policy context is one big example of biased pressure and interference in the internal affairs of our country. But what is interesting is that it seems that Europe itself cannot come to a consensus on what to do with bad Russia.

To be more precise, what to do with such a Russia that dares to pursue an independent policy and not look back at the shouts of the EU and the United States. It is the United States that is undoubtedly the main beneficiary of the growing tensions between Russia and Europe. But this cannot overshadow a really major defeat of European diplomacy in Moscow. 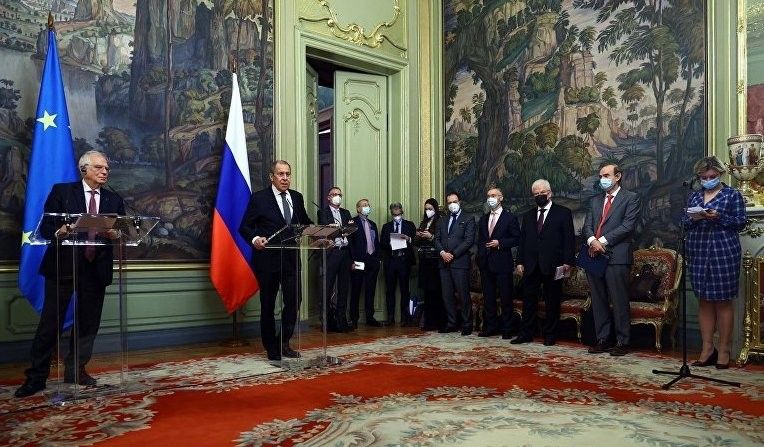 First of all, Borrel's negotiations with Lavrov were generally held in a nervous atmosphere, the parties could not come to a common denominator. And how could they, due to the fact that Borrel by default expressed concern about the case of Navalny, and demanded his immediate release. But what is important is that in Moscow, his rhetoric was not belligerent at all, while in Brussels, he immediately attacked the Russian Federation with accusations.

This has already caused concern in Moscow. According to Regnum, the Russian Foreign Ministry said that the critical statements about Russia by the EU High Representative for Foreign Affairs and Security Policy in Brussels are in sharp contrast to what he said in Moscow. Obvious duplicity, isn't it?

At the same time, Borrel was not just critical, he proposed to introduce new sanctions against our country. And these sanctions, there is no doubt, will be imposed - the question is, why did Borrel come then?

So, he proposed to introduce new sanctions. At the same time, he was subjected to such obstruction, speaking in the European Parliament, that experienced diplomats were also surprised. He was criticized and accused that he went on about the Russian side - but no one could explain what it was. As expected, the deputies from Eastern Europe and the Baltic states criticised and shook their fists the most. This was reported by Vesti.

They demanded not only to shame Borrel, but to punish and dismiss him. A letter with such a demand was signed by more than 80 MEPs, and the initiator, no matter how ridiculous it may sound, was the mighty Estonia, a third of whose population left to pick berries in Sweden and wash toilets in Poland, as soon as the European borders were opened for them.

The opposition is demanding sanctions

The topic of sanctions is not new, but this year it has received a new dimension. After all, the calls to impose sanctions come from Russian citizens - the same Navalny, as well as his closest associates - Leonid Volkov, who is hiding from a criminal case in Germany, and Vladimir Ashurkov, executive director of the Navalny Anti-Corruption Foundation (FBK, recognized as a foreign agent on the territory of the Russian Federation).

The list of those against whom they demand to impose sanctions is clear. There are politicians, officials, and businessmen among them. Perhaps the key figures are the main functionaries of the state bank VTB, headed by Andrey Kostin. Among the unexpected figures is Health Minister Mikhail Murashko. It is not clear  what he has done to "Navalny followers". Apparently, the fact that he successfully promotes the Russian vaccine "Sputnik V" in the information space. Soon the vaccine will be registered in the EU, which poses a threat to the pharmaceutical giants of Europe and the United States. Is this the reason?

But the simple calls to impose sanctions might look like the usual shaking of the air, if not close contacts of Navalny followers with their Western curators. So obvious and brazen that no one hides them. The day before the online conversation between the mentioned Mr. Volkov and Mr. Ashurkov with their friends from the EU and the United States was held.

A video conference with their participation took place last Monday, February 8. They were accompanied by functionaries from the EU, the United States, Great Britain, Canada, and, funniest of all, Ukraine - the most "democratic" country in Europe. Especially after three opposition TV channels were closed with a single stroke of the pen. The highest-rated in Ukraine, by the way.

The fact that citizens Volkov, Ashurkov, Navalny may be foreign agents is not even hidden, taking into account the open nature of that conversation. At the same time, all three of them may be detained. If Volkov is accused of violating the sanitary and epidemiological norms and creating a threat of infection with covid while organizing mass illegal actions, and there are enough Navalny's cases, then Ashurkov could be prosecuted for high treason altogether.

We are talking about the sensational video of the FSS operational shooting from 2012, where a man who looks like Vladimir Ashurkov in London is negotiating with a certain man, to whom he offers to leak information about the state bank VTB and its leaders, including Andrey Kostin. At the same time, he makes it clear that the opposition clearly needs financial support from abroad. Not just suport, but financing in the amount of $10-20 million a year.

In the media, a British diplomat is mentioned as Ashurkov's interlocutor. We would not be surprised if this is a freelance, or even a full-time employee of MI6. The British secret service MI6 is vitally interested in discrediting Russia, its institutions, banks and leadership. This has long been known. But the participation of Russian oppositionists in this has long been a rumour. Now, after the appearance of the video, the same Ashurkov seemed to fill his mouth with water - he refused to comment on the recording. Well, what to comment on, everything is clear. Komsomolskaya Pravda writes about the details of the conversation.

Returning to the split positions of European diplomacy on relations with Russia, it is important to understand its reasons. And just in the context of all this political story with Navalny and other figures. The bottom line is that Europe, and at least European business, is well aware of the importance of maintaining relations with Russia. This includes the economy, security policy, and the joint fight against threats such as terrorism and pandemics.

All the howling and shouting is mainly initiated by the offended Soviet Baltic States, Poland and the radicalized Ukraine, which, in its turn, is under pressure from the United States. The United States is trying to weaken two geopolitical competitors at once - Russia and Europe, which must fight it. And to give up the interests of their states in this struggle. 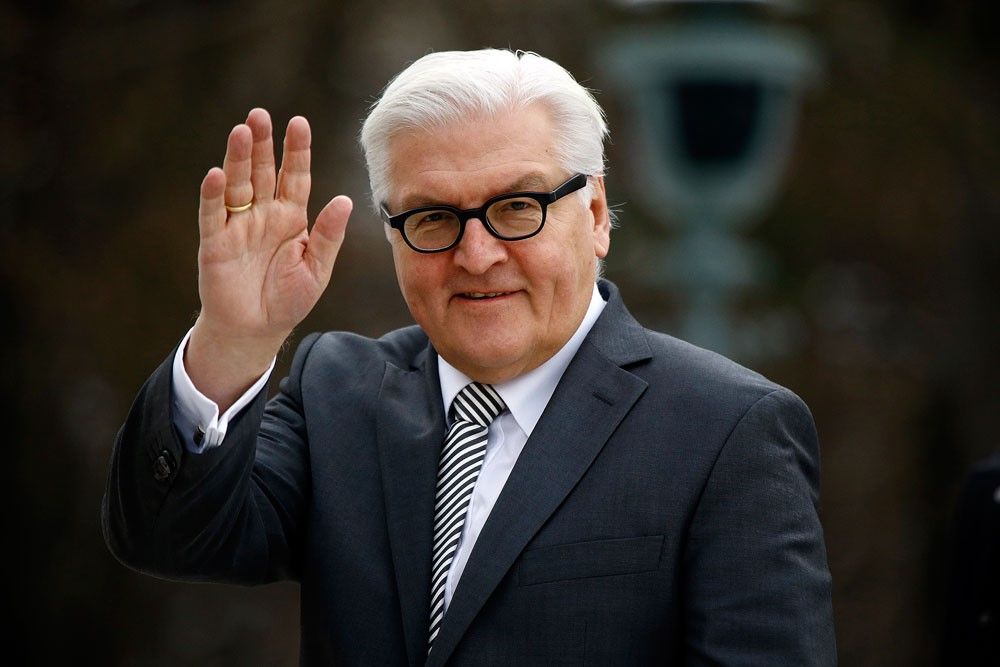 This is most clearly seen in the example of the Nord Stream 2 project. Which, we are convinced, will be completed. Recently, German President Frank-Walter Steinmeier called it the last bridge between Europe and Russia, which should not be destroyed in any case. Even the administration of the 46th President of the United States, Joe Biden, backed down on this issue.

Realizing that it will not be possible to stop the project, they try to get out of the situation, saving face. This is the reason for the White House's statements that the United States will wait for the completion of the SP-2, and only then they will determine the goals for new sanctions. In addition, they named a condition - taking into account the interests of Ukraine. Let's be honest - in the light of the past positions of the United States, Ukraine was simply "leaked". This is often the case with puppets.

In this light, the reaction of the Ukrainian Ambassador to Germany, Andriy Melnyk, who criticized Steinmeier, looks wild, which provoked a diplomatic scandal between Ukraine and Germany. The reaction of Western politicians to it suggests that our Western neighbours have suffered a crushing defeat in this area.

Taking this into account, the current actions of the "bifurcated" European diplomacy can be described as "hedgehogs pricked, cried, but continued to eat cactus." In this sense, cactus is Russia, and pricking is acting in defiance of their own national interests. But not everyone likes it in Europe.

To sum up, the pressure on Russia will not go away, but the tough position of our country, coupled with pragmatism, makes us look to the future, if not with optimism, then at least with a fragile hope that sense will prevail, and the confrontation will not deepen.