Zelensky had all that could turn off - the energy infrastructure at the collapse border.

The authorities of Kyiv are thinking about the evacuation of part of the residents of Kyiv from the city for the winter. The mayor of the Ukrainian capital Vitali Klitschko let slip about this. According to him, such a decision will be made in the event of a "worst-case scenario" in the development of the situation with electricity supply.

About the situation - the correspondent of The Moscow Post.

The topic with the possible evacuation of Kyiv is not raised for the first time. They talked about her at the beginning of November - then the journalists of The New York Times reported about insider information about the preparation of the city's population for the winter season with reference to Ukrainian officials.

Then the director of the municipal security department of the Kyiv city administration, Roman Tkachuk, said that if Russia continues such attacks (meaning missile attacks on the energy infrastructure), the city may lose the entire power supply system.

In this case, Kyiv officials will receive a notification of a critical situation 12 hours before the power supply system leaves the standing room. In this case, the administration will inform people and ask them to leave the city. But this statement was made a month ago.

Since then, at least one supermass missile attack on the critical energy infrastructure of Ukraine has taken place - more than 100 missiles of various modifications hit targets almost throughout the territory of B. Ukrainian SSR. As a result, regular power outages occur in Kyiv and other cities.

The PR people of President Zelensky had to urgently turn on the "anti-crisis," but they could "give birth" only two things: another portion of petitions in the West (mainly electric generators and air defense), as well as a novelty of the Ukrainian political "show" - the so-called. "points of indestructibility." They are thin tents with diesel generators and stoves of bourgeois, where you can warm up and charge the batteries of your phones and laptops.

The Ukrainians themselves, despite the complexity of the situation, found the strength to frankly make fun of such points of invincibility. Meanwhile, there is little fun: after all, if plans to evacuate the capital really exist, it is not at all clear how they can be implemented in practice.

About 3 million people live in Kyiv. Earlier, officials have already called for leaving the city for the winter period in the same villages, for stove heating. But such a number of people simply have nowhere to go. Some number can send to Western Ukraine, some hundreds of thousands of new refugees will accept Europe. But that's it.

And Klitschko's statement, made the other day, appeared for a reason. A number of Western sources say that Russia is preparing a new powerful and massive missile strike, which could finally lead to the complete collapse of the country's unified energy system into "islets."

In total, up to 20 strategic bombers of the Russian Aerospace Forces can be involved in strikes. And given the serious problems of Ukrainian air defense equipment, the latter may be almost critical for the energy and military sphere of Ukraine.

Given that each Tu-95 and Tu-160 strategic bomber is capable of carrying 12 cruise tactical and strategic missiles, the total strike can include 240 missiles. This is today a big problem even for advanced air defense systems, while the Armed Forces of Ukraine have only a small supply of modern Western air defense systems.

And this is not counting the missiles (the same "Caliber") ship-based. At the same time, all the "forecasts" of the Kyiv "strategists," and simply "talking heads" of Zelensky like Mikhail Podolyak or Alexei Arestovich about the imminent exhaustion of the Russian missile reserves turned out to be false.

The other day, Dmitry Medvedev, Deputy Secretary of the Security Council of the Russian Federation, wrote about this again, who in recent months has been actively bypassing the production of strategic ammunition.

"Enemies continue to carefully" calculate "our launches and our stocks. Hope in vain for the exhaustion of our capabilities. To be continued. That's enough for everyone! " Medvedev promised in his telegram channel.

The extreme massive blow was delivered on November 23. The objects of critical infrastructure of Kyiv, in Kirovograd, Khmelnitsky, Nikolaev, Poltava, Vinnitsa regions, were amazed. Strikes were inflicted in Kharkov, Lviv, Odessa, Ladyzhin, Krivoy Rog and other cities.

After the explosions, Kyiv, Khmelnitsky, Nikolaev and Zaporozhye controlled by Kyiv were partially de-energized. In Lviv, Kharkov and a number of other settlements, the light was completely turned off.

In addition, as a result of the shelling, the TES-6 and the PSPP were hit, there is no water supply in Kyiv, and the metro was stopped in the left-bank part of the capital of Ukraine. Rivne NPP was put into emergency operation. And at the South Ukrainian NPP, power units were stopped. Also, interruptions in the Internet were observed throughout Ukraine. 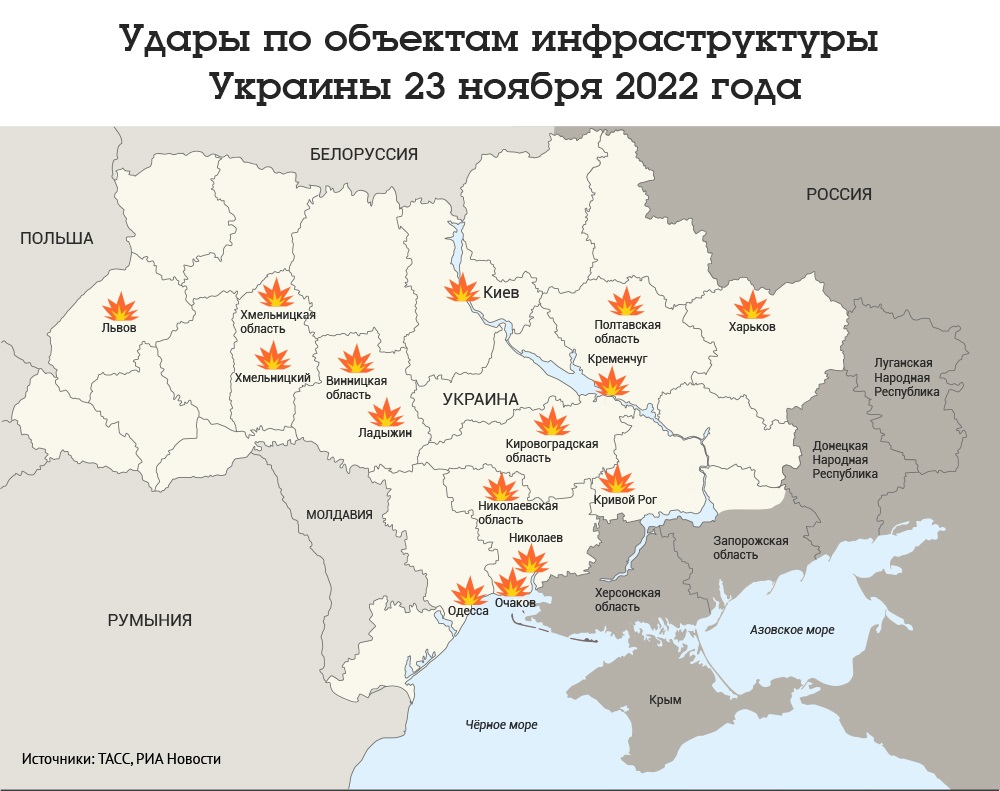 According to experts, at that time the substations with the highest voltage - 750 kV, responsible for the transfer of electricity between regions of the country, were disabled. All nuclear power plants in Ukraine, as well as most of the TPP, TPP and HPPs, were temporarily shut down.

"It can be stated that today the same cumulative effect of strikes that has been mentioned since October 10 has come: several waves of strikes have consistently disabled elements of the Ukrainian energy system, which has existed almost unchanged since the collapse of the USSR," military expert Boris Rozhin stated then.

Analysts noticed that the Russian Federation conducts such attacks about once every two weeks. Given that today is November 29, a new blow could indeed take place in the coming days.

Recall that for a long time the leadership of the Russian armed forces deliberately did not take these steps. It was hoped that in Kyiv they would come to their senses and return to negotiations. Instead, we got sabotage on the Crimean bridge, a new wave of terrorist attacks on Russian officials and activists. And then the mass demonstrative executions of Russian prisoners of war.

The first day of massive bombing of the energy infrastructure, we repeat, was October 10. Since then, outside of mass strikes, air alarm in Ukrainian regions is still announced every day. And sometimes across the country. And after the strikes on November 15, Ukrainian Prime Minister Denis Shmygal said that almost half of the power system had already been disabled.

According to evil tongues, such statements were made by Ukrainian politicians specifically to mislead Russia. In fact, the infrastructure was seriously damaged, but it was far from collapsed. But now, when missile strikes do not stop, panic is growing in the offices on Bankova.

After all, the allies, despite all the persuasion, did not massively supply modern air defense systems, and their own capacities are not enough even to stop the Geranei.

Being confused, they went to an outright provocation in Kyiv, which could end in an almost nuclear conflict. This, of course, is about a Ukrainian missile that fell in Poland and killed two people, not counting the tractor. The rocket was immediately called Russian, but the Poles quickly understood what was the matter. There is a big difference between hate rhetoric and the country's real involvement in the fighting.

With his recklessness, Volodymyr Zelenskyy once again tried to drag NATO into a direct clash with Russia. Or, at worst, knock out Patriot complexes to protect the Ukrainian sky from Russian missiles. He failed to achieve either, but once again undermined his confidence in himself from Western curators.

On the sidelines in the West, the point of view is increasingly spreading that Zelensky is no longer just a useful idiot. And the idiot is dangerous. And in its intransigence, multiplied by consciousness changed by prohibited substances, it can reach anything, up to strikes on nuclear power units to further accuse Russia.

Actually, such attempts were already during the shelling of the Zaporizhzhya nuclear power plant in Energodar. They continue today. On the eve of the representative of the administration of the Zaporizhzhya region of Russia, Vladimir Rogov, once again called on the IAEA to influence the Ukrainian military so that they stop shelling the station. 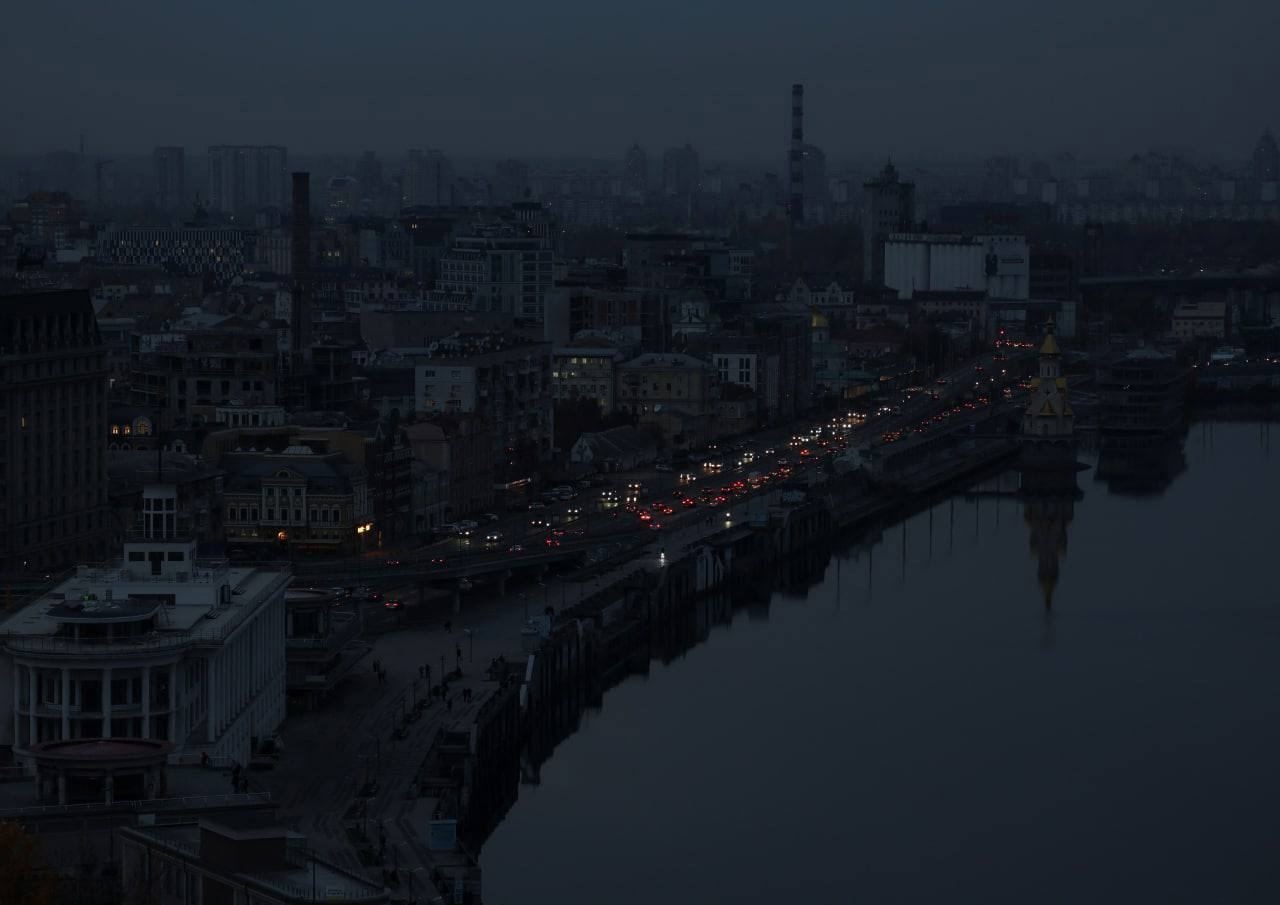 This is what the center of Kyiv looks like in the evening. Photo: open sources

However, he also noted that in this case, Kyiv would call the head of the IAEA Rafael Grossia "bribed," "sent by the Cossack" of the Russian Federation. This has long become a normal practice of Kyiv and European politicians.

Those who call for a decrease in tension are accused of almost working for the Russian special services. They will not allow peace. And since they do not want peace - very difficult, dark and cold times await Kyiv and all of Ukraine.