Biochemical Joe: what fate the Bidens prepared for Russia and Ukraine

The general public is presented with unprecedented facts about the development of biological weapons and the role of the US president's family in financing these criminal projects.

According to the correspondent of The Moscow Post, during a special military operation to protect the republics of Donbass, Russian security forces gained access to secret documents on the work of US biolaboratoriums in Ukraine. Yesterday, some of these documents and a significant amount of information about their activities were presented to the general public.

With good reason, one can argue about the aggressive nature of the work carried out in the biolaborations - they posed a threat not only to the local population, but also to Russia and the entire continent.

Which seems even more wild and discouraging, the work of the biolaborations was supervised directly by the family of the 46th US President Joe Biden. Relatives of the latter had serious commercial interests related to this illegal activity. In fact, profited from the impending biological catastrophe.

Plague on our homes

It was confirmed that in Ukraine, the creation of biological weapons was carried out by local and foreign specialists, under the cover of the United States and the Kiev regime. In response to skepticism, Western journalists in law enforcement agencies explained: the documents received have the signatures of real officials, are certified by the seals of many organizations.

Thus, it will become clear the principle with which Joe Biden and his team defend the interests of the Ukrainian state in the conditions of a special military operation in Russia. The release of this data, and even in connection with the financial interests of the Bidens themselves, may have the effect of an exploded bomb on his rating. Moreover, both in the world and in the States themselves.

The laboratories themselves operate in the country much longer - Nikolai Azarov, the former prime minister of this country, tried to fight them. But in the end, under fear of physical reprisal, he was forced to leave Ukraine.

Today, it is confirmed that the studies were systematic, and were carried out at least since 2009 with the direct control of specialists from the United States. This was done in the framework of projects P-382, P-444 and P-568. One of the curators of such activities was the head of the DTRA office at the US Embassy in Kiev, Joanna Wintroll. 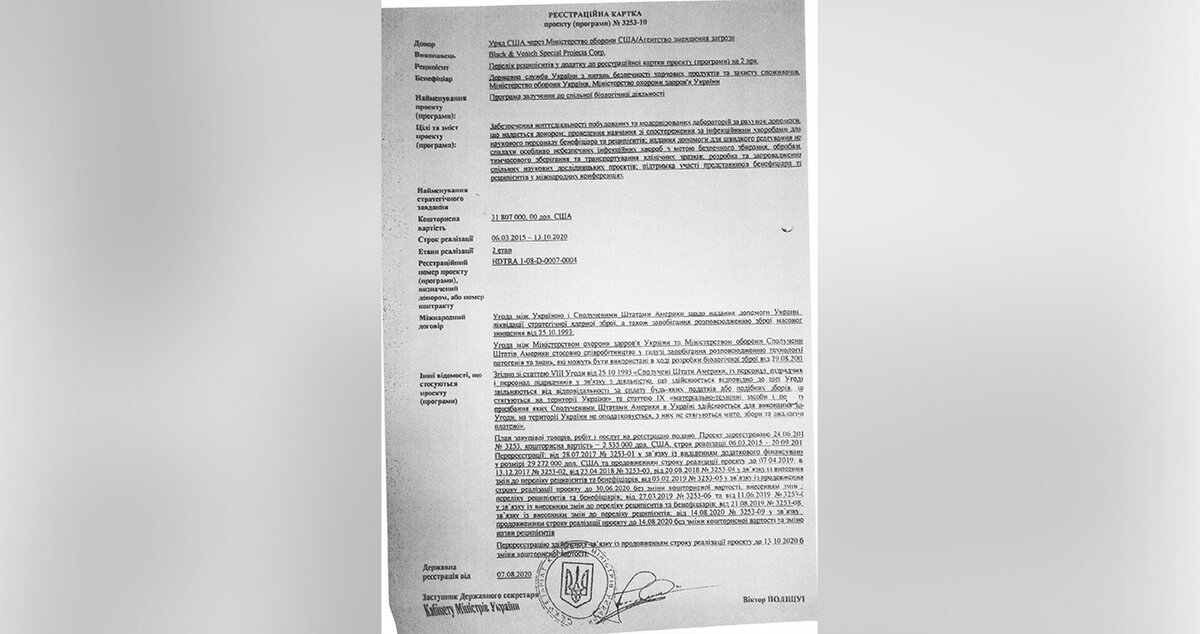 Part of the secret documents about the US biolaborations received during the SWA. Photo: Security agencies of the Russian Federation

As a basis for functioning after the Maidan of 2014, the security forces cite the Agreement on Joint Biological Activities concluded between the US military department and the Ministry of Health of Ukraine on March 6, 2015.

During the implementation of these projects, six families of viruses (including coronaviruses) and three types of pathogenic bacteria (pathogens of plague, brucellosis and leptospirosis) were identified. One of the main strengths of these pathogens was their great contagion. And also - friendliness for local biological material. This, apparently, meant all peoples living on the vast territory of Russia, Belarus, Ukraine and nearby countries.

Much indicates that the Pentagon directly participated in the financing of military biological projects. At the same time, the real recipient of the funds were the laboratories of the Ukrainian Ministry of Defense in Kiev, Odessa, Lviv, Kharkov. The total amount of financing is about $32 million. However, even wilder is the commercial interest of the Biden family in the implementation of these programs.

Directly related to this process was the investment fund of the Rosemont Seneca Foundation, which is led by Hunter Biden, the son of the current US president. The total assets of the fund are estimated at $2.4 billion. So what reached the biolaborations themselves in Ukraine is still flowers.

Led by Hunter Biden, the fund turned out to be associated with the main contractors of the US military. First of all, by Metalliota. She and Black and Veach are the main suppliers of equipment for US biological laboratories around the world. About this writes "Kommersant."

Since 2014, Metabiota has been a partner of the EcoHealth Alliance as part of the US Agency for International Development (USAID) PREDICT project, which aims to "predict and prevent global threats of new diseases."

And how in such a situation to do without one of the most scandalous personalities in history - the "democratist" and inspirer of coup d'etat around the world George Soros? His foundation (the organization was recognized as undesirable in Russia) was also directly involved in the implementation of the project. 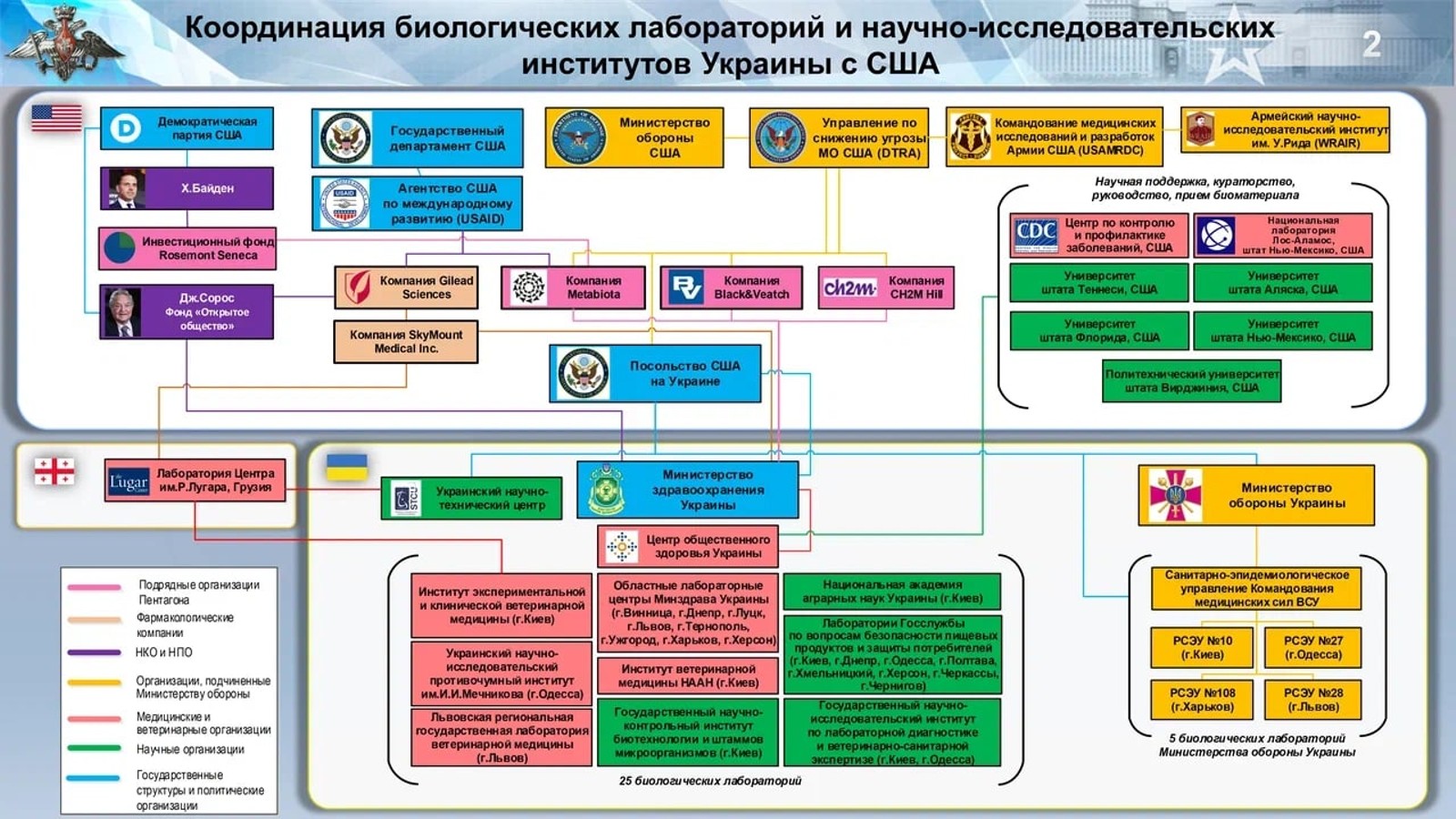 Scientific supervision was provided by leading US research organizations, including the National Laboratory in Los Alamos. The latter, recall, is developing nuclear weapons as part of the Manhattan Project.

Ukraine as a "feed base"

It is no secret that the Bidens are not ideological fighters for democracy, human rights and the future of the American people, even if they try to imagine themselves as such. The network was repeatedly circled by personal photographs of Hunter Biden in the presence of women of reduced social responsibility, and before the scandal with the biolaborations was different - with the infamous Ukrainian oil and gas company Burisma.

Hunter Biden became a member of the board of directors of Burisma in April 2014 (he also included ex-President of Poland Alexander Kwasniewski, friend of the stepson of ex-Secretary of State John Kerry Devon Archer, etc.). He was supposed to oversee the legal block and promote the company in international organizations. His salary was $50 thousand per month.

Biden Jr. "s work at Burisma coincided with a major corruption scandal. As part of an investigation into possible money laundering, the British authorities froze $23 million in deposits in London banks, which allegedly belonged to the owner of Burisma Nikolai Zlochevsky.

But already in January 2015, the British court had to unblock the deposits, as the Ukrainian prosecutor's office refused to submit the necessary documents for the investigation. All this suggests that the company could banally withdraw funds under the supervision of Biden Jr., and the cover was carried out by the Ukrainian state itself, completely dependent on the United States.

However, far from everyone in Ukraine meekly paid attention to this. In 2015-2016, the then Prosecutor General of the country Viktor Shokin tried to prevent this. However, he was fired on the call of then Vice President of the United States Joe Biden to the fifth President of Ukraine Petro Poroshenko. About this wrote TASS.

Later, the scandal with the Bidens and Burisma developed already against the backdrop of the presidential election in the United States. But the main thing here is another - money, the specific commercial interests of the Biden family in Ukraine.

In the case of biological laboratories, it is still more striking. It seems that harassing people for them was only a tricky task when earning capital. While the Pentagon in this story only continues the line of strangulation and damage to Russia and its allies.

It's hard to do it directly. That is what the Rosemont Seneca Foundation has to do with the gaskets. Projects could be financed uncontrollably and without reporting to the general public. The Bidens had to earn a lot from mediation services.

Incredible cynicism strikes. Who could this biological weapon be directed against, as not against Russia. Wider - the peoples and states of the former USSR. Apparently, even the fact that the allies of the States, more specifically, the same Poland and the Baltic countries, could suffer in the Pentagon did not bother anyone at all. 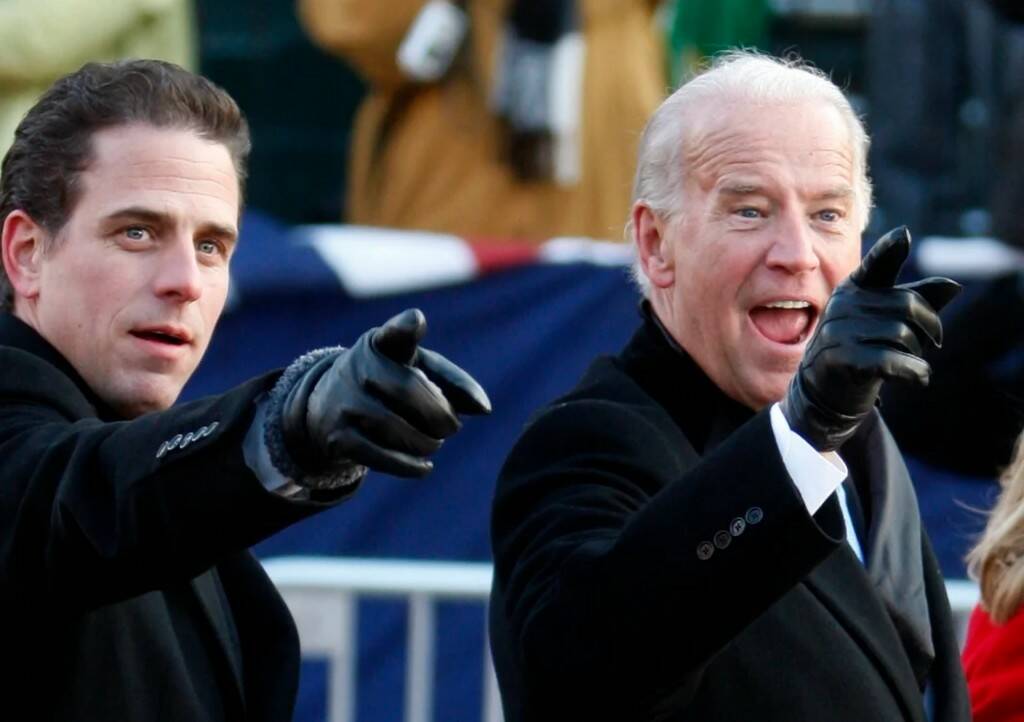 Well, the Bidens once again allowed us to make sure that their attention to Ukraine is connected not only with the geopolitical struggle against Russia, but also with banal money earnings.

And after that, Mr. Biden dares to call the Russian leader a murderer and a criminal? Even if you leave aside what the United States has done over the past 30 years (and yesterday, by the way, was the next anniversary of the beginning of the bombing of Belgrade), it does not climb into any gates.

"Biochemical Joe," it seems, thought that he would be able to complete what he had begun. But plans were prevented by a special military operation of Russia... And now, it seems, the American president is not afraid of a geopolitical failure, but of a reduction in his own "feed base" in the former Soviet republic.