Big IAEA campaign, or it was in Kherson

Ukraine's provocations at the ZPP and a suicidal counterattack in the South are attempts to draw the weakening attention of the international community to the Ukrainian crisis. Money and weapons are running out, but there are no victories - what's next?

On the eve of the official representative of the Russian Foreign Ministry Maria Zakharova answered questions from journalists of The Moscow Post at the next weekly briefing.

Among them was: can the Russian side be sure that the team of representatives of the International Atomic Energy Agency (IAEA) will be neutral in clarifying and covering the causes of the crisis around the largest Zaporizhzhya nuclear power plant in Europe.

At the same time, Maria Vladimirovna clearly withstands the diplomatic tact, because the political situation around the IAEA suggests that nothing has been left of neutrality for a long time. As, in fact, in almost any Western institution that is embroiled in a geopolitical confrontation with Russia.

What to say about the IAEA when even Switzerland, which supported sanctions against the Russian Federation, refused neutrality? Not to mention many other supposedly neutral institutions. About specifically European and Atlantic structures and completely silent - their "neutrality" is known.

Or another example - Amnesty International, which has been difficult to accuse of objectivity before, is "changing its shoes" right on the fly, changing the theses of its report on Ukraine after fierce criticism from the Kyiv regime and its patrons in Washington.

In fact, and the international columnist for The Moscow Post drew attention to this earlier, the IAEA is not a completely independent and independent structure.

The Governing Council in 2021-2022 includes 17 countries that are on the list of unfriendly for Russia. And the Council is led by the representative of South Korea, an obedient ally (if not puppets) of the United States.

The general director of the agency, Rafael Grossi, is from Argentina. But he himself worked for a long time under NATO as a representative negotiator from his country. In addition, he was a member of the governing bodies of the Organization for the Prohibition of Chemical Weapons (OPCW) - it proved itself during fakes about "chemical weapons" from Russian ally Bashar al-Assad in Syria.

So the neutrality of Grossi and the team he sent to the ZPP is very doubtful. And even more so, it is doubtful in the context of tremendous political pressure on the organization and personally its leader from the Western community.

Meanwhile, yesterday the mission reached Energodar, covering 550 kilometers from Kyiv. All stages of the route were recorded by Western journalists. However, supporters of the Ukrainian Nazis tried here too: the visit could have been disrupted. Indeed, on the same day, a group of saboteurs was neutralized in Energodar, which could prepare a blow to the delegation.

In this case, the move is win-win: people would have died in the territory that is under the control of the Russian Federation. That is, the Russian Federation would not be able to ensure their safety. They would say something else - that it was Russia that killed them in order to hide some possible violations at the station. The arguments that Russia itself invited the agency's specialists would have been ignored.

In addition, with the approach of the IAEA mission, the intensity of shelling of the city and the territory of the station increased. The building of the Energodar administration was hit by a kamikaze drone. And all these links are one chain: Ukraine needs to raise the degree of confrontation so that the trickle of Western financial and military aid does not dry up at all.

For Ukraine, this death is similar. It requires, according to various estimates, from $5 billion to $9 billion a month only to cover the budget deficit. And against the background of complete hopelessness in armed confrontation - it is imperative to prove to the patrons that food goes to the horse - that Ukraine can win.

"X" instead of Kherson

But with this - a big problem. Two days ago, Zelensky gave the order to launch a long-awaited counteroffensive near Kherson. But by the evening of August 29, all the victorious relations of Kyiv (and in general the coverage of the counteroffensive) almost stopped. The reason is the complete defeat of the advanced parts of the Ukrainian group.

The offensive was unprepared, suicidal. Just a meat grinder for the Ukrainian military, many of whom are mobilized and do not understand at all why to fight with their own compatriots.

And the reason for the rush, as well as the shelling of the ZPP, is clear. It is necessary to have time to show at least some success before September 8, when the next meeting of the donor countries of Ukraine providing it with military assistance will be held at the Ramstein airbase in Germany. The main organizer is, as you might guess, the United States and its Secretary of Defense Lloyd Austin. 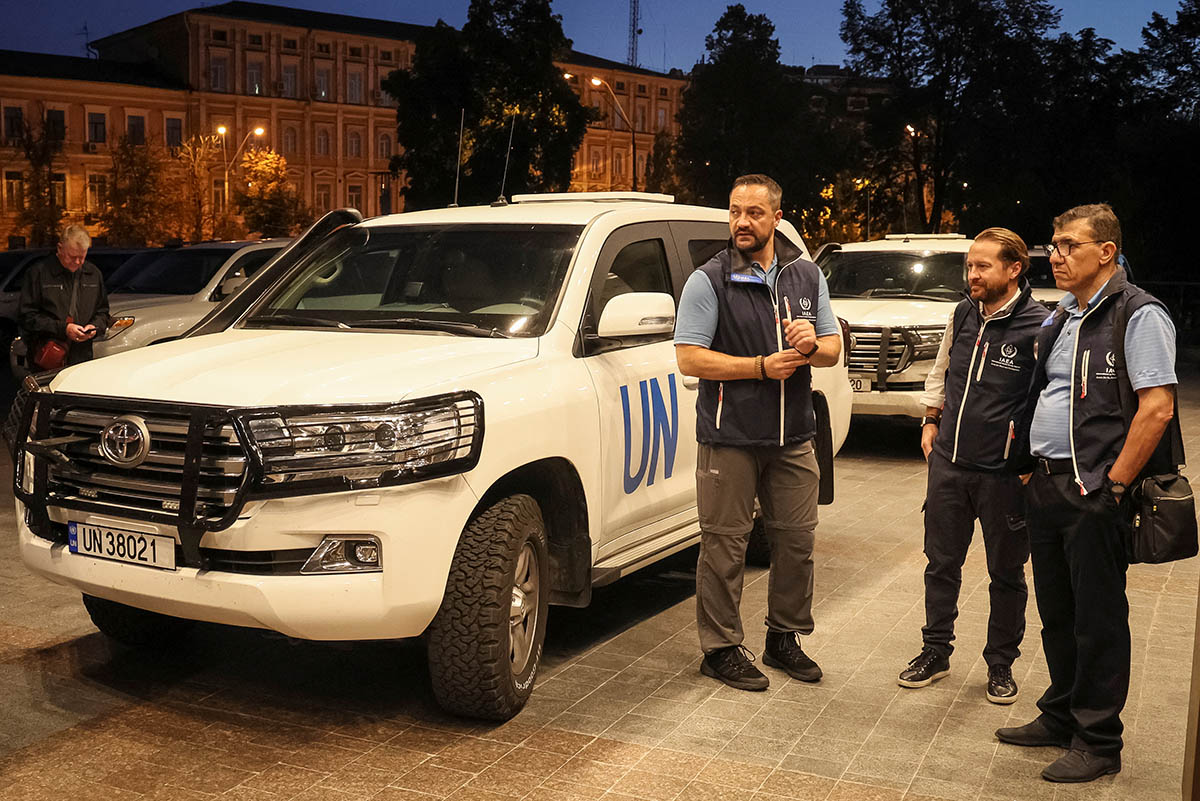 The IAEA mission is already in Energodar. Photo: spektr.co

What will Volodymyr Zelenskyy present to them? A complete failure in the South, provocations with an atomic threat in the area of ​ ​ the ZPP, the collapsing Ukrainian economy, the smuggling of the provided weapons and the complete collapse of the public administration system. You can't find a lot with such a "back" with the Russians, although you have Western "wunder-waffles," at least not.