Having calmed down with the extension of the START-3 Treaty, the United States is again trying to show its "coolness".

As the correspondent of The Moscow Post reports, another diplomatic "spat" took place between Russia and the United States over the scandal with Alexey Navalny. The administration of Joe Biden is trying to use Navalny for its own purposes. They have already reached the accusations of the use of chemical weapons by Moscow, allegedly to poison the opposition politician and other "fighters against the regime".

Russian Ambassador to the United States Anatoly Antonov called these accusations groundless insinuations. And that's putting it mildly. Especially in the light of the fact that our country has repeatedly asked foreign partners to share information and establish a dialogue in order to clarify the truth - what, in fact, happened to Alexey. But if the truth comes out, then there will be nothing to put pressure on Russia. The Americans don't need it.

Even more cynical are the accusations of the United States against the background of the fact that Russia destroyed all its chemical weapons a long time ago. The last such munition was disposed of in the Russian Federation back in 2017. This was confirmed by the Organization for the Prohibition of Chemical Weapons. At the same time, the United States remains almost the only major state that has not done so. Earlier, they said that they would finish this process only in 2023, as TASS wrote about this. There is no belief in this.

Even the closest allies of the United States have long had no illusions that the situation with Alexey Navalny is being used only to put pressure on our country, impose new sanctions, and discredit its leadership. To do this, all forces and means are involved, especially in terms of information warfare. Here is the notorious Bellingcat with its fake investigations, and the mass processing of people on social networks. And those who cannot be processed are simply deprived of their accounts, as recently happened with the accounts of Yevgeny Prigozhin and many others.

There is no doubt that if the story resolves, the United States will find another reason to pressure and impose sanctions. As the new head of the State Department, Anthony Blinken, managed to say that the United States does not rule out anything towards Moscow. Understand as you want, as they say.

Of course, it will not come to any nuclear strike. Washington is well aware of this. And they use it. This may be due to the increased activity of the States in this information field in recent days. After all, Russia, represented by Vladimir Putin, showed a gesture of goodwill when it agreed to extend the Strategic Arms Reduction Treaty (START) for another five years. Moreover, the extension of the agreement was ratified as quickly as possible by the State Duma of the Russian Federation. 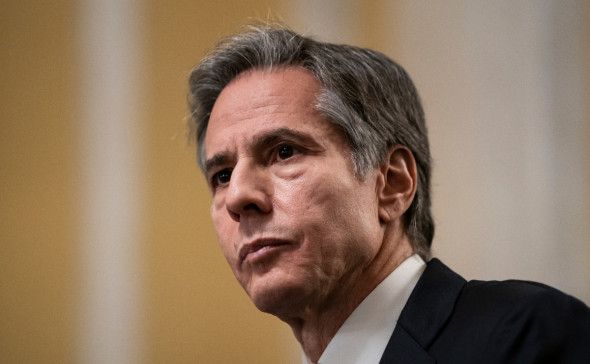 With the arrival of Anthony Blinken as Head of the State Department, the US rhetoric towards our country has not changed at all

The activation of the United States on this issue can be understood. In recent years, the Russian Federation has published information about a whole line of the latest means of deterring any hotheads. These are the latest systems Avangard, Poseidon, hypersonic complexes Zircon, and a number of others, from which the American strategists, apparently, had their hair standing up. They had to negotiate.

The tension is growing

But the White House does not understand the gestures of goodwill. In general, it seems that they do what they want there. When the heart was relieved, and the threat of escalation on the nuclear issue was stopped, the Biden administration returned to what the Trump, Obama, and Bush administrations had done before them. That is, to banal intimidation and tightening the screws on the international arena.

On what basis the United States generally speaks about exclusively domestic Russian affairs is not at all clear. It's not just about Navalny himself, but also about the mass unsanctioned protests that took place over the weekend. Clearly fueled by interested parties from abroad.

The United States directly supported these illegal actions by issuing a number of publications. The Russian Foreign Ministry said a note of protest, in addition, called a spade a spade - interference in the internal affairs of our country is unacceptable. Komsomolskaya Pravda wrote about it.

It is funny that at the same time, the US Embassy advised its citizens not to go to unauthorized actions. This was written by the Е1 portal. Do they take care of their citizens, and let others go to the violation of the law and shake the situation in the country? And this is against the backdrop of large-scale actions in the United States itself, where first the Black Lives Matter movement smashed up stores, and then there was the historic shooting of protesters in the Capitol on January 6. What is allowed to Jupiter - not allowed to the bull? 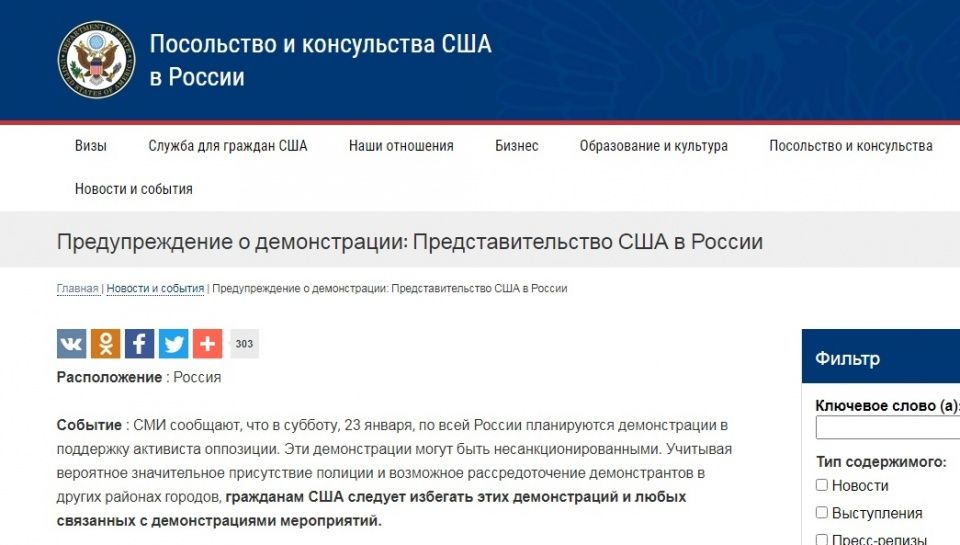 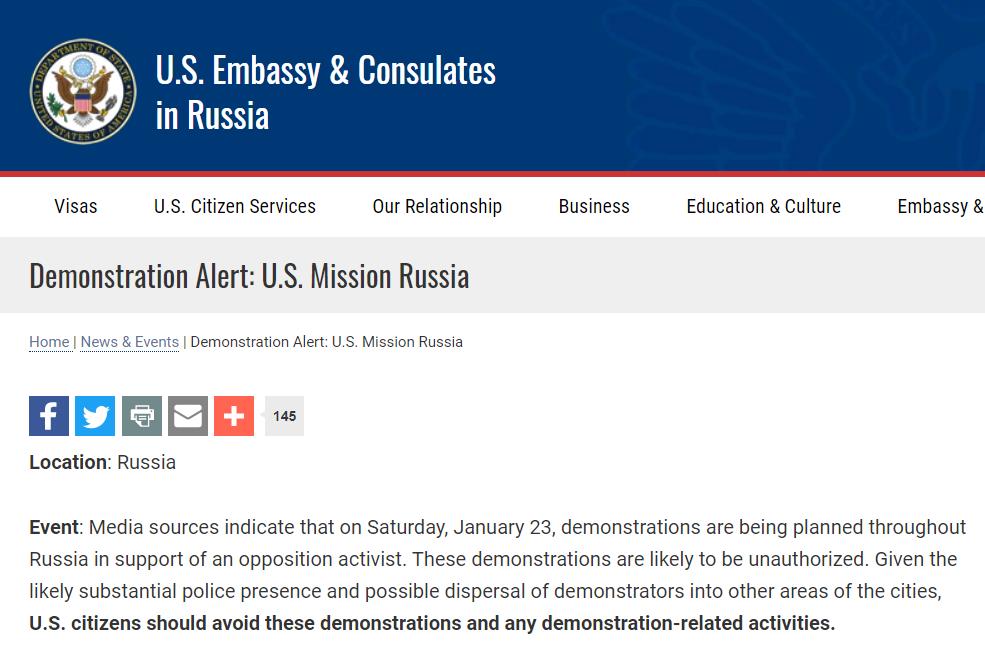 This applies to almost everything the States do. It is enough to recall the invasion of this country in the small island state of Grenada in 1983. The official version is for the purpose of protecting American citizens and restoring stability in the country at the request of the Organization of American States.

Much more recent examples are known by almost everyone. The invasion of Syria in the tenth years without any UN sanctions, not to mention the permission of the official authorities. Bombed-out, essentially destroyed Iraq, where they could not find any weapons of mass destruction, no matter how much Colin Powell shook test tubes with unknown substances. So what? Where are the sanctions against the States? That's it.

Sometimes American zeal gets in the way of even his real allies. What is worth only the story of the Nord Stream 2, which is now in the final stage of construction. The gas pipeline is extremely profitable not only for Russia, but also for Germany, and for the whole of Europe. But it is not profitable for producers of expensive shale gas from the United States, which are losing the fight for the European market.

If market mechanisms do not work, then there are also non-market ones. However, in this case they are trying to bend not only Russia, but also Germany, and to this they are clearly not used to. That is why the sanctions policy of both Trump and Biden in this direction is failing. Despite all attempts and the imposition of sanctions against the pipe-laying vessel Fortuna, the vessel has headed to sea and the work will be continued.

At the same time, a witch hunt and repression towards dissenters continues in the States. Harsh repression that resembles real insanity. At one time, our country was vaccinated during denunciations of the 30s of the last century. Even young people in our country know about Pavlik Morozov, who reported his father. But there was no such vaccination in the history of the United States. Will get.

It's about how an American teenager reported his father to the FBI, who allegedly "was preparing to storm the Capitol." This was written by the Life publication. Now the father is facing a considerable term, and the boy has become a real hero, inspiring many others. There are also thousands of donations from the sympathetic public, which will help the hero pay for his studies at college and even university. And in general, to settle in life without intrusive Trumpist parents.

In the case of Russia itself, we may be fed another portion of sanctions due to hacker attacks on the infrastructure of the United States at the end of last year. Despite the complete lack of evidence of Russian involvement, there is no doubt in the American establishment that this is the work of bad Russians. There will definitely be sanctions for this - and the results of the investigation will not affect them in any way, you can be sure. Because this, like the situation with Navalny, Nord Stream 2 and others, is just a reason.

To sum up, with the extension of START, we have moved even further away from the threshold of a possible nuclear war, but the tension in international relations is only growing. President Vladimir Putin also understands this. At the recent Davos Economic Forum, he once again warned the world about the risk of a war of all against all. This was written by Moskovsky Komsomolets.

At the time, Putin's famous speech at the Munich Conference in 2007 was prophetic, but not everyone was sobered up. Will they listen this time?