Bayraktar on the wall

Weapons delivered by Turkey to Ukraine began to fire. Recep Tayyip Erdogan will only be glad of a new aggravation, trying to fish in the murky water of the Ukrainian crisis?

According to the correspondent of The Moscow Post, a series of incidents occurred on the demarcation line in the Donbass, which could be a precursor to the aggravation of the armed conflict. On the eve of the Ukrainian army made an air strike from the Bayraktar drone on the positions of the militias. Earlier, a series of such drones was delivered to Ukraine from Turkey with the sweeping approval of its president Recep Tayyip Erdogan.

The combat drone was used to destroy artillery near the village of Granitnoye, Volnovakha district. Allegedly, the use of weapons was agreed with the commander in chief of the Armed Forces of Ukraine, Valery Zaluzhny and President Volodymyr Zelensky. The number of deaths in the DPR army is not reported, officially Ukraine also does not comment on information about the use of Turkish drones.

At the same time, unofficial persons in Kiev claim that the Bayraktar, used first, was only a response to the alleged shelling from the territory of the DPR. Earlier, we recall, the head of the Armed Forces of Ukraine Valery Zaluzhny officially lifted all restrictions on the military to open return fire, which was met with great enthusiasm by the patriotic public in Ukraine. 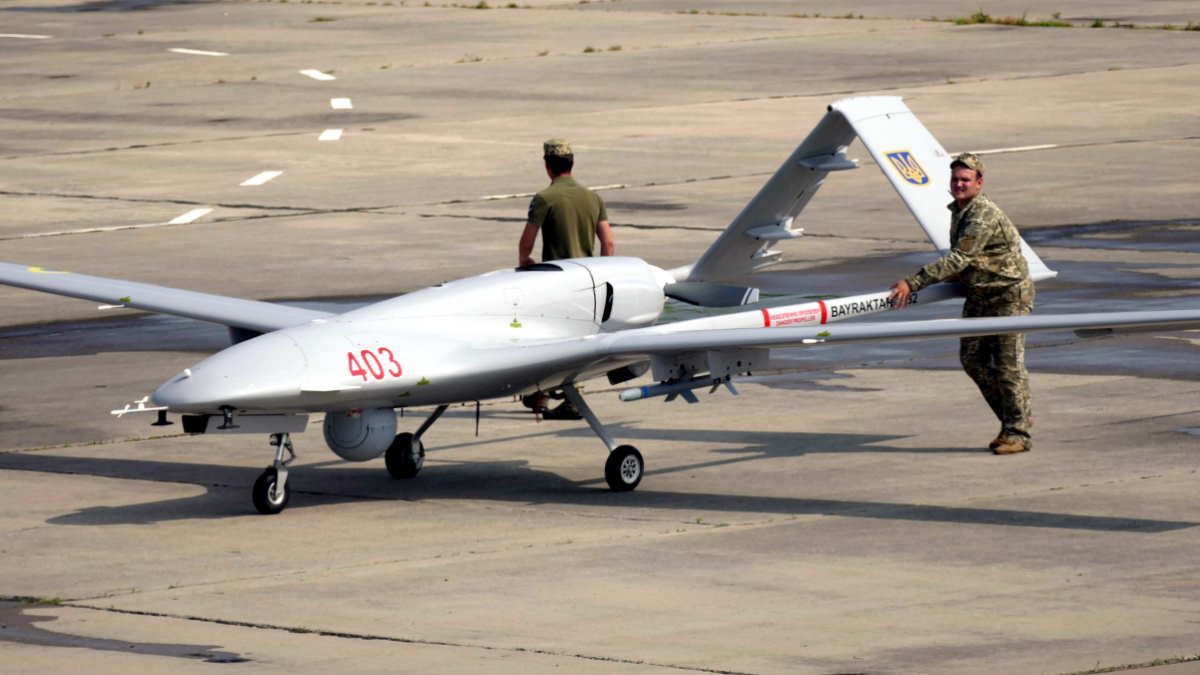 Bayraktar of the Armed Forces of Ukraine, delivered by the Republic of Turkey

This step of the new commander in chief was reported by TASS. Commanders are allowed to use all available weapons. Commanders on the spot can make decisions themselves - depending on the situation. Also, by order of Zaluzhny, the military was spared the need to fill out excess documentation.

The decision was made in many ways to appeal to the so-called right-wing and nationalist "Dobrobats," who, even without the brushing of Kiev, did not hesitate to open fire without coordination with the command. That is, Ukraine de facto withdrew from the armistice regime reached last spring, when any military and any chief were obliged to coordinate any military operations with a higher command.

A few days ago, her one case occurred - on suspicion of murders of the Armed Forces of Ukraine, the LPR observer was suddenly detained at the Joint Center for the Control and Coordination of the Ceasefire (JCCC) Andrei Kosyak. The Russian Foreign Ministry regarded this as a provocation, and noted that Mr. Kosyak is a citizen of Russia, but Ukraine did not provide consular workers with access to him.

Moreover, as stated by the Plenipotentiary Representative of Russia in the contact group on the settlement of the situation in eastern Ukraine Boris Gryzlov, such actions disrupt the agreements and led to the disruption of the extraordinary event of the "Minsk format." About this writes Kommersant.

But for Ukraine there is a much more negative signal. After the shelling from Bayraktar, the investigative committee of the Russian Federation announced that they were going to open a criminal case in connection with the aggravation in the Donbass. This was reported by the official representative of the department Svetlana Petrenko. 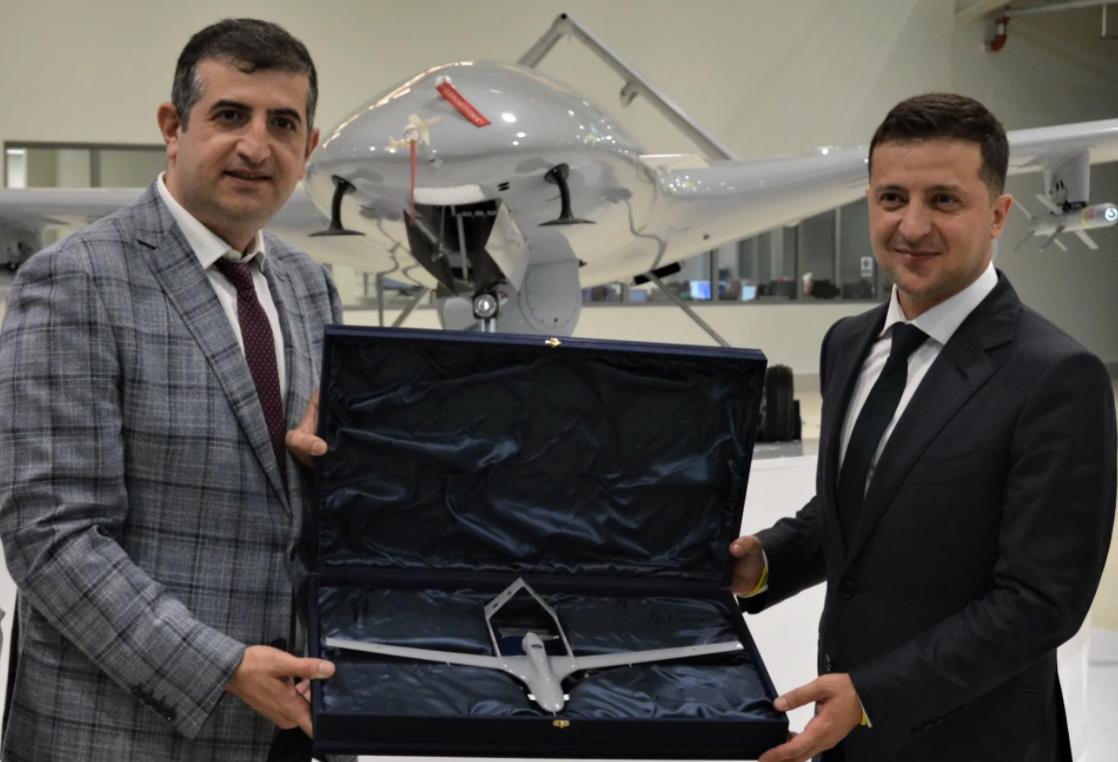 Vladimir Zelensky at the Bayraktarov plant in Turkey

The UK claims that the Armed Forces of Ukraine carried out numerous artillery shelling of the settlements of the Telmanovsky district, presumably from 122-mm guns. The Russian side also insists that the Ukrainian military occupied the village in the "gray" zone of Staromaryevka (in Ukraine they refute this).

The order to open a criminal case was given by the head of the UK, Alexander Bastrykin. "As part of the investigation, the investigative committee will give a legal assessment of the actions of the military personnel who gave and executed the order to carry out numerous shelling of the Donbass infrastructure, and other illegal actions against Russian citizens," RIA Novosti quoted representatives as saying.

All this, as they say in Russia, smells very bad. About half a million citizens of the Russian Federation live in the Donbass. Earlier, Vladimir Putin made it clear that Russia would not indifferently watch the bloodshed in the Donbass. In Ukraine itself, opposition experts believe that President Zelensky can really go for a new aggravation.

Relations with Western countries are deteriorating, real aid and political support, not to mention economic, are not enough to satisfy Kiev's request. In this situation, a small "victorious" war, as a result of which Ukraine will suddenly need to be protected from the "aggressor," may spur its rating, which has fallen to 23% (two months ago - more than 35%).

However, in the case of Ukraine, the situation is generally clear, albeit poorly predictable. We want to pay attention to the very fact of the use of Turkish Bayraktar drones, which are considered one of the best strike units of this type in the world.

For a long time, Turkish President Recep Tayyip Erdogan has consistently pursued a line to revive Turkey's influence in a number of regions. And the main ones are Syria, Transcaucasia and, as is not paradoxical, Ukraine.

Erdogan and his politicians "ideologists never concealed that they saw Crimea solely as Turkey's sphere of influence. In the peaceful Kyuchuk-Kainardzhi peace treaty itself, the treaty between Turkey and Russia of the late 18th century clearly states: if Russia ever loses sovereignty over Crimea, it should withdraw to Turkey.

Erdogan recognizes Crimea as part of Ukraine. He also participated in the Crimean platform - a PR event of the Ukrainian authorities in order to remind himself and shame Russia. But it is naive to believe that Turkey will make a real effort to peacefully resolve the conflict. And even more so, if possible, he will not take Crimea for himself - even if this is now an unrealistic scenario.

"Bayraktar" is, according to Stanislavsky, the same gun on the wall that was supposed to shoot. And it will shoot more. Apparently, arming Ukraine, Recep Tayyip Erdogan secretly hopes that if aggravated, drones will throw fuel into the fire - especially in the wake of their use during the second war in Nagorno-Karabakh in the fall of 2020.

As for the procurement of Ukraine, in January 2019, the then president of the country Petro Poroshenko announced the signing of an agreement with Turkey on the supply of drones. In March, he announced the completion of deliveries and successful tests of weapons. In the same 2019, the new president Vladimir Zelensky visited the Bayraktarov production plant in Turkey.

Now Ukraine is ready to buy everything for which it only has enough money and credit resources. For example, it buys obsolete warships from the UK, and something already decommissioned in the same USA receives as free assistance.

At the same time, Erdogan is actively acting in Transcaucasia, trying to oust, replace Russia in this region. Azerbaijan is focused on Turkey, which actively uses Bayraktar during the Karabakh war. They brought him serious success.

Then the hotheads in Kiev suggested using drones for the quick, rapid capture of the LDNR. This could be regarded as suicide, but since 2014 Ukraine has only been engaged in self-destruction.

Last summer, the armies of Azerbaijan and Turkey held joint military exercises in Nakhichevan. The deepening of Turkish-Azerbaijani cooperation in the military-industrial sphere is provided for by the Shusha Declaration signed by the parties - in fact, an allied agreement between the countries.

The document covers all areas of cooperation between Ankara and Baku, including regulating obligations on defense and mutual assistance. According to Aliyev, the declaration also contains provisions for the creation of the Zangezur corridor. The transport line must pass through the territory of Armenia and connect Azerbaijan with its exclave - the Nakhchivan Autonomous Republic.

However, to say that Erdogan is successful is to lie. He is trying to warm up passions in Ukraine with his weapons, because he is extremely beneficial to the weakening of Russia. At the same time, there are no other achievements. In Syria, he could not achieve significant success. In Transcaucasia, the actions of his and Aliyev led to the appearance of Russian peacekeepers right under the belly of Azerbaijan.

In Ukraine, the supply of Bayraktarov is small - the country simply does not have money to buy them, and talk of opening production of Turkish drones inside the country remains talk. 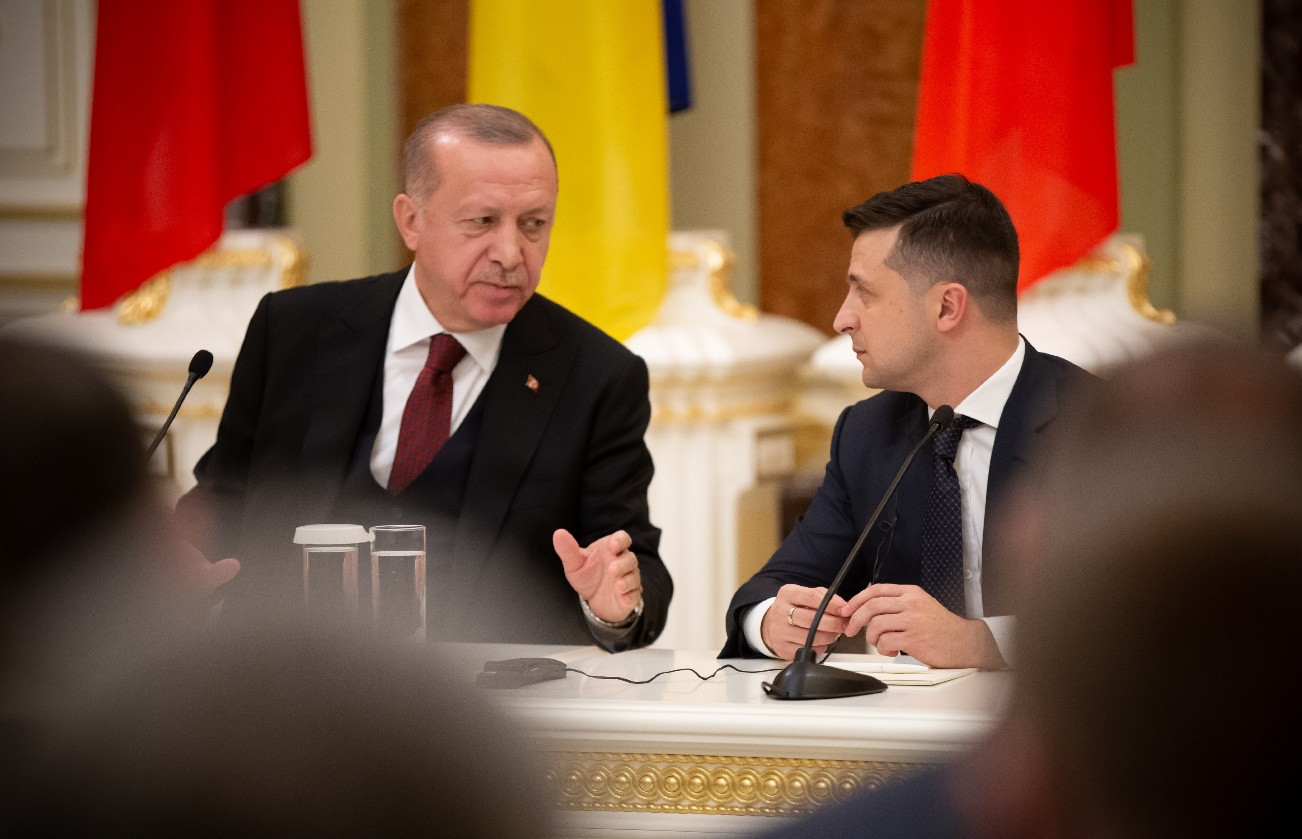 Helping Ukraine, Erdogan clearly does not want a peaceful resolution of the conflict

But the guns left on the wall by Erdogan for Ukraine are already starting to shoot. And in the case of real criminal proceedings, will the Russian investigation have questions for the Turkish side, which put weapons in the conflict zone? Of course, no one will try to attract Erdogan himself, but relations between the countries may deteriorate due to Turkey's aggressive and inconsistent policies.

And trying to sit on two chairs, at some point Erdogan will have to choose - a tit in the sky (Crimea, which will never be Turkish) or good relations with Russia, which in itself limits Turkey's influence on its traditional spheres of influence.