Against the background of growing geopolitical tension, Azerbaijan, at the suggestion of its Western and Turkish "friends," goes on another aggravation in Karabakh. The goal is to distract Russia from the SVO to protect Donbass?

In Azerbaijan, they officially announced the operation "Retribution" in the zone of the Nagorno-Karabakh conflict. The formal reason was the death of an Azerbaijani soldier as a result of shelling by "illegal Armenian armed formations" of the positions of the Azerbaijani army. Of course, this is an interpretation of events from Baku.

About the new exacerbation in Nagorno-Karabakh - in the material of the correspondent of The Moscow Post.

Local sources claim that, allegedly in fact, the Azerbaijani Armed Forces have been transferring forces to the Lachin and Zanzegur corridors since April. Russian peacekeepers are standing in the Lachin corridor. Until recently, they tried to prevent the resumption of the Karabakh war. At the same time, they say that the active phase of the new exacerbation should have begun on August 5. If so, why she was given a start earlier, it is not known.

As a result of yesterday's hostilities, the Azerbaijani military took control of a number of heights - including Gyrkhgyz and Sarybab. At least so reported in the Ministry of Defense of the republic. Among the Armenian servicemen there are killed and wounded, the department also said. Meanwhile, the administration of the unrecognized Nagorno-Karabakh Republic recognized only one killed, also reporting one killed by Azerbaijan.

Yesterday, the military of the Nagorno-Karabakh Republic reported the use of grenade launchers and anti-aircraft missile systems by Azerbaijan, as a result of which two contract soldiers were killed and 14 were injured.

In response to the latest events in the unrecognized Nagorno-Karabakh, a partial mobilization was announced. The decree on its beginning was signed by the president of the unrecognized republic Arayik Harutyunyan. This indicates that the situation may continue to develop according to an unfavorable scenario.

So far, there is no exact data on what happened and is happening now. However, among other things, the Azerbaijani side stated that the zone of responsibility of Russian peacekeepers should be demilitarized.

This is a political blow to the Russian peacekeeping contingent. It undermines the peacekeeping efforts of the Russian side and threatens to resume full-scale hostilities. Obviously, the current President of Azerbaijan Ilham Aliyev, despite a relatively balanced approach in relations with Russia, would prefer that Russia get out of Transcaucasia.

The Azerbaijani side has previously stated that the presence of the Armenian military in the territories where the peacekeepers of the Russian Federation are temporarily deployed (the word "temporary" is especially emphasized) remains a source of danger.

Let us remind you of the background: at the end of September 2020, hostilities resumed in Nagorno-Karabakh, which became a continuation of the conflict that began in 1988. On November 9, 2020, with the mediation of Moscow, a ceasefire agreement was signed, as a result of which Azerbaijan retained territorial acquisitions in Nagorno-Karabakh.

A new aggravation between Armenia and Azerbaijan in Nagorno-Karabakh occurred due to the impasse in relations between the two countries. This opinion was expressed by political scientist, head of the Caucasus department of the Institute of CIS Countries Vladimir Novikov. According to him, quoted by Lenta.ru, the situation is serious and it has reached a dead end.

"Constant friction continues between Armenia and Azerbaijan on the issue of how to understand the clause on the opening of communications in the region. Azerbaijan wants to create the so-called Zangezur corridor, which would connect Turkey and Azerbaijan with Nakhichevan. Armenia, which understands what this means for its national interests, clearly does not want this, "the expert said.

He is convinced that Baku's policy of force pressure on Yerevan will continue until Azerbaijan and its allies achieve their goals in the conflict zone.

Particular attention should be paid to the interests of Turkey, which under Recep Tayyip Erdogan is fully returning to Transcaucasia. Here, the interests of the Turkish "Sultan" clearly contradict the Russian ones and are superimposed on the general difficult geopolitical situation in the world.

Erdogan, among others, may be behind the new aggravation in Karabakh. Ankara and Baku have long declared each other allies, including militarily. Turkey has provided tremendous assistance to Azerbaijan during the resumption of the conflict in 2020. Largely thanks to the Turkish Bayraktar drones, the Azerbaijanis managed to inflict a major military defeat on Armenia.

At the same time, no one believes that the interests of these players are not more global. Russia, as it does not paradoxically sound, turned out to be a winning player from the conflict in Karabakh.

On the one hand, it did not allow Armenia to "multiply by zero" its ally (and at the same time turned Nikol Pashinyan's course back towards Moscow), on the other hand, it received a military presence specifically in Karabakh in the form of its peacekeepers.

Therefore, the victory of Erdogan and Aliyev turned out to be half-hearted - they were able to gain a foothold in the territory of Artsakh (Nagorno-Karabakh), which was under Armenia, but they got the need to coordinate their actions with the Russian peacekeeping contingent in the region.

Today Russia is opposing the Western world in Ukraine - it is conducting a special military operation to protect Donbass. Attempts to undermine the situation on the borders of Russia have happened in recent months and earlier, including just in Nagorno-Karabakh. It seems that Western elites indirectly contribute to this. Turkey is a member of NATO, and for all its independence, it acts perfectly in the fairway of the Alliance's policy when it benefits.

Staggering Russia's position in Transcaucasia is incredibly necessary and beneficial for both NATO and Turkey itself. In parallel with this, an attempt continues to undermine the internal situation in Armenia.

Despite the tremendous pressure and military defeat in Artsakh, Prime Minister Nikol Pashinyan held on to his post - including through the support of Russia. But as a result of the current aggravation, with the loss of Armenia's positions, both Pashinyan and Russia will be under the crossfire of criticism of Armenian society. 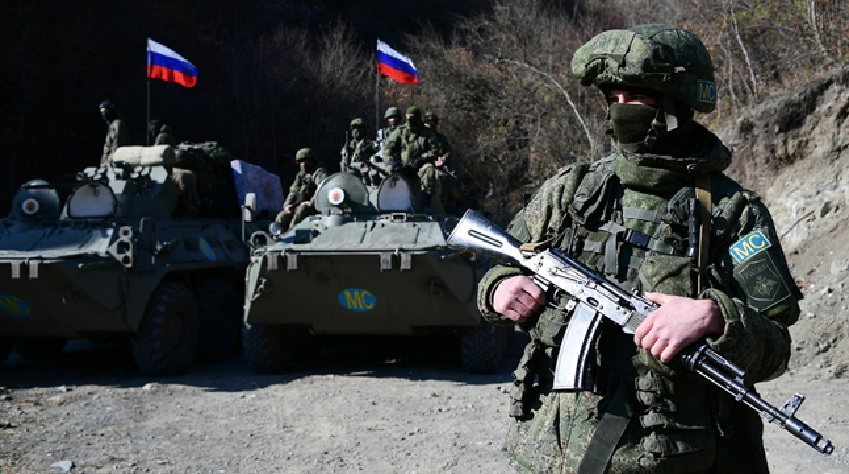 In the medium term, this threatens to intensify this hotbed of instability so much that you have to divert attention and resources from the Ukrainian direction. It seems that this is the underlying goal of the directors of the latest sad events in Karabakh. Well, it is very easy for any provocateur to ignite the flame of confrontation there - which, in fact, seems to have happened.