At the Avangard plant, which is part of the Almaz-Antey Corporation, there have been stories with a criminal "smell" for almost two decades, haven’t there?

According to the correspondent of The Moscow Post, the Almaz-Antey Corporation sold  property complex on the Krasnoho Kursanta street in St. Petersburg to LSR Group at auction. And while the Corporation is selling off its non-core assets, the bosses at the MMZ Avangard controlled by it are changing one by one. Its former employee Maxim Berg, who told reporters a lot of interesting details, has been trying to shed light on what is happening outside the walls of the defense enterprise since 2018. How can this turn out for Director of Almaz-Antey Yan Novikov?

A peculiar "tradition" of frequently changing directors appeared at the enterprise immediately after its privatization. By the way, Avangard is engaged in the defense industry, works with state secrets, and therefore at the head there should be a person who can be trusted with all this - so that the missiles are built in time, and there are no "leaks" of information.

Now the Director of Avangard is Denis Popkov, who is considered a protege of Almaz-Antey. Previously, he worked at the plant as Deputy General Director for scientific and technical development, and then his appointment raised questions. The fact is that his mother, Lyudmila Popkova, was convicted of embezzlement. As МК wrote, working as the head of the Trade Union Committee of the Presidential Administration, the Government of the Russian Federation, the Federation Council and the State Duma, she appropriated funds allocated for holding cultural events.

The question is, how did the son of Mrs. Popkova get, in violation of all the provisions of the laws on the protection of state secrets, highest admission?

At the same time, having settled in Avangard, Popkov immediately began to "pull up" his people. One of them was someone I. Cherepannikov. This person was appointed to the position of adviser to the CEO. And, as it is known, often people in such positions can be "wallets" for managers.

And, it seems, it was Cherepannikov who in 2017 engaged in a deal with a certain Rusenergoholding LLC to issue a loan in the amount of 50 million rubles under the guise of purchasing equipment for Rosneft. Moreover, the amount had to be issued by two payment orders and done within a day. However, MMZ Avangard is not a credit institution to give a private company 50 million rubles in the form of a loan or loan from the target money of the state defense order, especially without the presence of any agreement between the parties. And the reason for the issuance of funds allegedly was only one - the official note of the adviser Cherepannikov.

Rusenergoholding itself also raised certain questions, and after the failure of the transaction in the same 2017, it was liquidated. Did not manage to "divide" the budget millions?

Maxim Berg, the former head of the security service of the Avangard plant, told about this story. He also told a lot of interesting things in the conversation.

Directors change, the situation is not better

For example, about the strict privatization of the plant. The first attempt to do this was made in 2002, when the General Director of the company was Leonid Bryukhanov. In July of that year, he issued securities on behalf of the company: 6 promissory notes with a face value of 25 million rubles each with a due date on presentation, but not earlier than July 1, 2003. 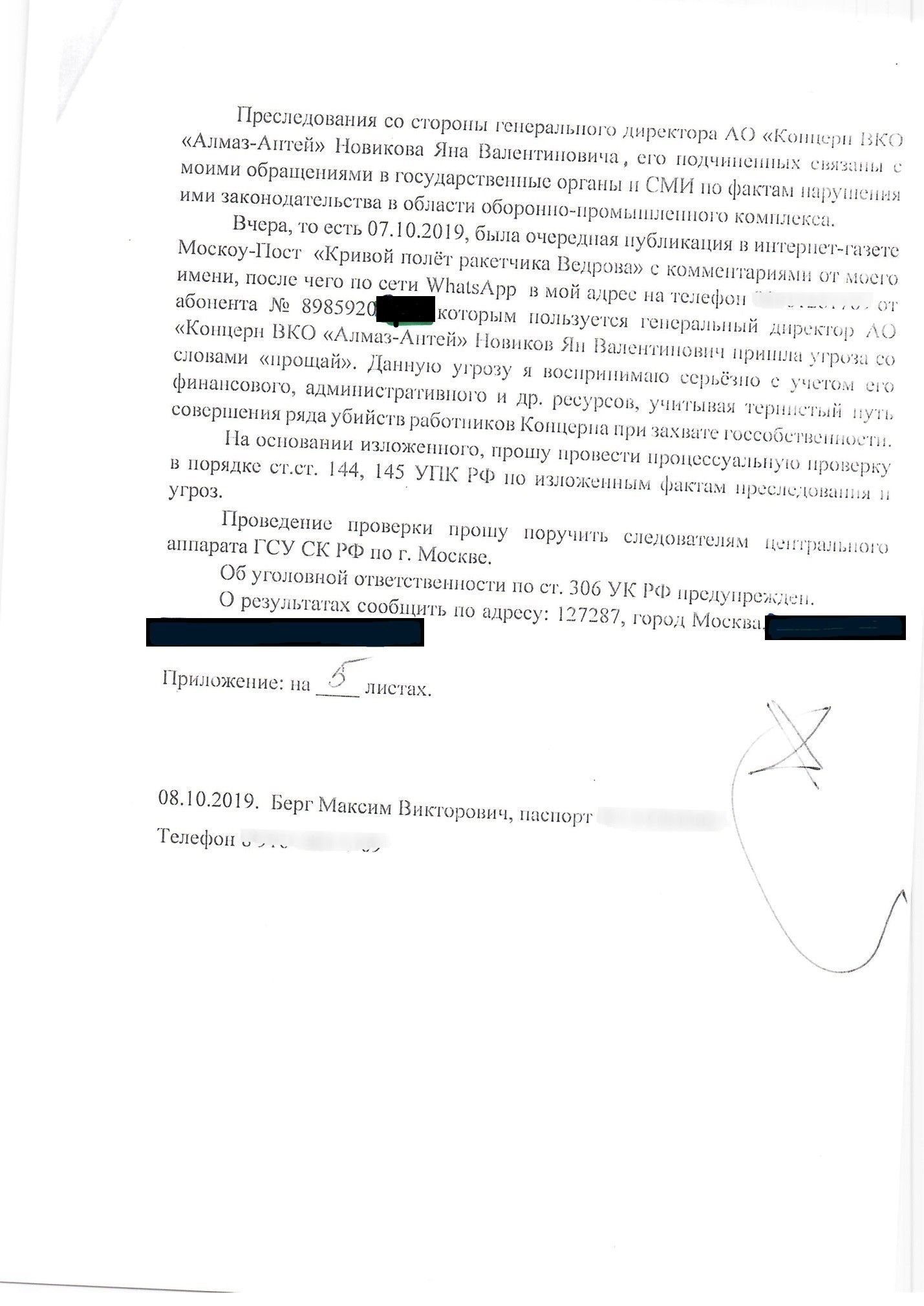 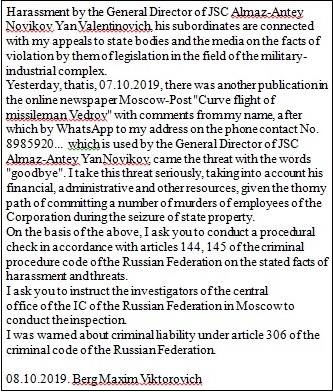 After Berg's communication with journalists, he complained that threats began to arrive in his address

At about the same time, Bryukhanov signed an agreement with Soyuzpremier-Steel LLC, represented by General Director L. I. Pavlenko, to transfer securities to the latter - in return for transferring 50 million rubles to the former's account. But in the end, for some reason, it turned out to be only a little more than 29 million on the accounts of Avangard. Soyuzpremier-Steel, in turn, managed to pass promissory notes to Evenkom.

A year later, Evenkom demanded 150 thousand rubles upon presentation of promissory notes for payment. But these promissory notes, even in the case of their legal circulation, could not be paid in cash, since the nominal value of each promissory note exceeds the maximum amount of cash payments between legal entities – 60 thousand rubles, which follows from the instructions of the CB in force at that time.

And, what is even more interesting, the decision to privatize the state enterprise MMZ Avangard was made by the decree of the Government of the Russian Federation on 28.06.2002, that is, before the date of issue of promissory notes. Thus, the General Director of the enterprise, Bryukhanov, before the state registration of the created OJSC MMZ Avangard had no legal grounds for issuing promissory notes for 150 million rubles and issuing any other securities.

In addition, Avangard took 29 million rubles on loan for a year from Soyuzpremier-Steel LLC at 200% per annum, which exceeded the Central Bank's refinancing rate by 8.6 times at the time of the transaction.

As Kommersant wrote, later in this story other interesting details were revealed. For example, Evenkom was registered to… an ordinary Moscow teacher. Her passport was stolen, and after the registration of the Evenkom, so that she did not report the loss to the police and did not cancel the document, they put it in her mailbox. The teacher did not even suspect that she formally owned the promissory notes of the rocket factory for almost $5 million at the then rate.

Avangard was also unlucky with the next Director, Gennady Kozhin. As Vzglyad wrote, a criminal case was opened against Gennady Kozhin for embezzlement of the plant's funds on a particularly large scale. The investigation proved his guilt, moreover, he himself fully admitted his guilt. But arrests did not follow, because by that time the statute of limitations had already expired. And the damage to the enterprise amounted to about half a billion rubles!

By the way, the same criminal case involved Akhmet Mukhametov, who later assumed the position of General Director of the plant.

Mukhametov worked at the plant for more than 40 years and knew the internal affairs very well. Is that why Novikov put him in this position - hoping to get a good performer?

However, Mukhametov showed "teeth". As Berg said, the CEO was ordered to prepare documents for the sale of more than a dozen hectares of land in exchange for new buildings in the Moscow region. But it turned out that the houses were unfinished and, besides, were at a distance of 4-5 hours. Therefore, Mukhametov refused the deal, which then, according to rumours, greatly angered the General Director of the Corporation for legal work Anatoly Konovalov.

Also, detractors express the version that Mukhametov at that time had his own wonderful plan: to build "his own" houses on the factory land.

Later, Mukhametov was dismissed allegedly in connection with "improper performance of his official duties", although in fact everything was formalized by agreement of the parties.

After the dismissal of Akhmet Mukhametov, Mr. Novikov put Alexander Vedrov in the chair. At the same time, the head of the security service of the Avangard plant, Maxim Berg, appealed to the FSS, after which he was dismissed. 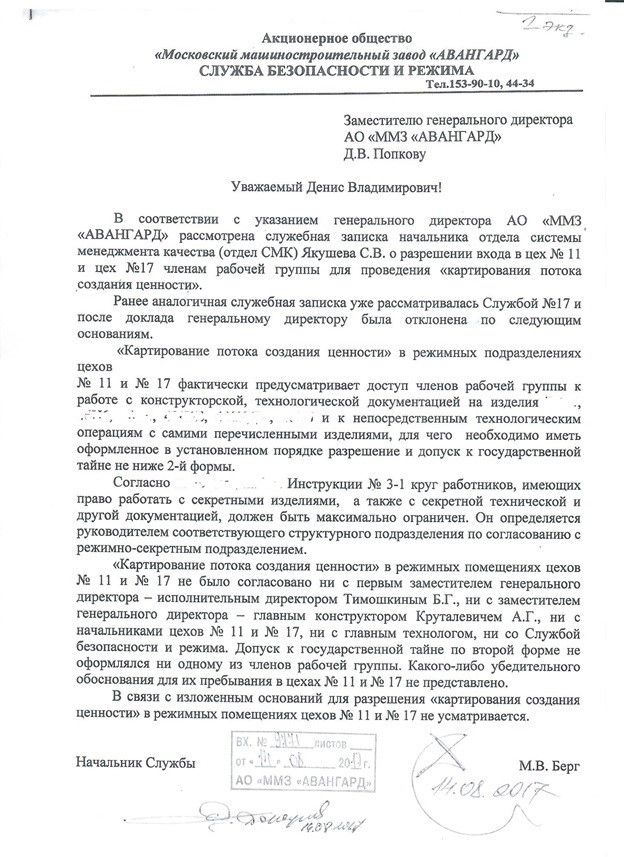 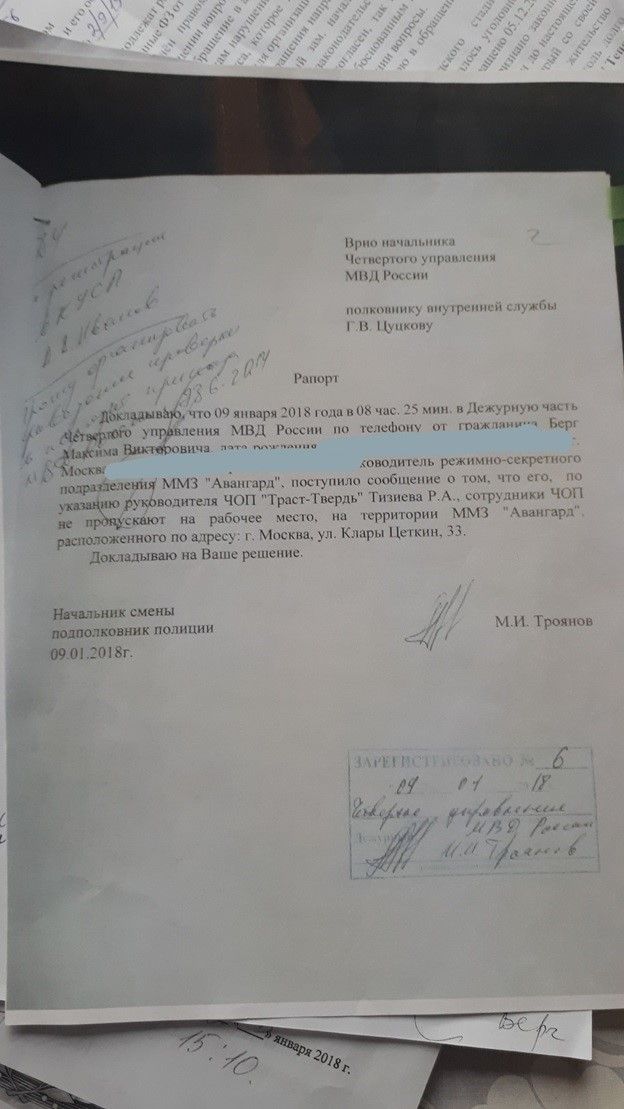 And Denis Popkov - recall, a man whose mother was convicted of embezzlement, then came to post of Vedrov.

Apparently, "strange" appointments in Avangard could be at all levels. According to Berg, once one lady was "offerred" him for the position of senior inspector of the security service and regime of the Avangard plant with access to state secrets in the form of "top secret". But during the check, it turned out that she was on the Federal wanted list and is a citizen of a foreign state. In her biography completely white spots - it is not really clear what she was doing for the last 10 years before that attempt to find a job.

What can be said, interesting things are happening at the Moscow plant. And it can be supposed that Almaz-Antey is well aware of all this. Could Novikov personally be involved?