The former top manager of the Russian Railway Aleksei Taycher goes on a thin edge, risking to run into questions of law enforcement authorities of how he got one of the largest leasing companies of the country "Transfin-M".

Earlier the investigation found out that Zotov stole over 1 billion rubles allocated for transactions of purchase and sale of railway cars – he intended to resell them at the overstated cost. He was initially sentenced to seven years of prison.

But everything can be by no means not so simple. Zotova people from the team of the former director of the Federal Freight Company (FFC) Aleksei Taycher could "heat" simply. Details – in the material The Moscow Post.

Zotov headed the company to the middle of November, 2018. At him the structure belonged to NPF Blagosostoyaniye and was structure of the Russian Railway. Shortly after to the place of Zotov in the company management Maxim Anishchenkov came, the company replaced owners.

Taycher, Alexander Goland, Maxim Anishchenkov and Ivan Blagodatskikh became new owners of "Transfin-M". They in 2019 redeemed the TFM-Garant company that at first I was absolute affiliated structure "Transfin-M", but soon because of some perturbations turned into her owner.

"Transfin-M" took in bank the credit of 55 billion rubles on the security of the company. This money was transferred the TFM-Garant companies in the form of a loan. And after "TFM-Garant" became the new owner of "Transfin-M".

Sale of assets began. And the got profit of 15.5 billion rubles didn't go to advantage of shareholders and pensioners of NPF Blagosostoyaniye, and was divided between new shareholders. What it, dexterously turned scheme on doubtful enrichment?

Thus leaves that the new management "Transfin-M" took the credit on the security of a corporate property to buy the company. And, at lower price. And Zotov was decided to be moved away, apparently, from eyes down with that didn't pull out all above-mentioned details on a surface. And there could be a story about one thousand stolen cars.

In half a year after cars left on leasing, the client could find more favorable financing terms, and, having taken the credit in Sber, redeemed them ahead of schedule. Owing to these actions, according to checking, damage was caused to the enterprise for the sum about 400 million rubles, and Zotov was accused of fraud.

Minus all taxes, the transaction on the contrary made for the company 270 million rubles of net profit – Kommersant wrote. What is interesting, it wasn't even challenged in arbitration, at once having become a subject of criminal case. Not therefore whether what opponents were afraid to lose a dispute in the first instance?

As Taycher "pressed" the railroad

As for Taycher - we will stop on the key facts of his biography. As the head of FGK he fairly "pomotat" the railway market. At him continuous and notable rise in prices for rail transportation began. As a result logistic schemes in the Northwest region were violated

In 2019 Taycher in general decided to create such monopolist in the sphere of freight transportation by rail on the basis of assets of "Transfin-M" and "WEB LEASING". It also happened.

The new structure became the owner of the powerful rolling stock, having caught more than 80 thousand cars, and it was one of the largest operators carriers in the country. Almost monopolist. It seems that Taycher isn't afraid of disputes with FAS at all. Though it is known that at him "The federal freight company" was repeatedly suspected by FAS of violation of the antitrust law.

Not so long ago affiliated with Taychery JSC SG-Trans held negotiations on establishment of partnership with the St. Petersburg "United carriage company "Unicon" 1520" having at the order about one thousand a tank containers for transportation of petrochemical cargoes. To Taycher all isn't enough and it is already worth worrying to Belozerov?

The following circumstance attracts attention: in 2018 practically all affiliated structures "Transfin-M" made a profit of tens of millions of rubles. Where did all this money disappear?

Taycher is engaged and the real estate – dashingly receiving sick government contracts from the Government of Moscow through Inkor-Invest. At the same time in founders of the company offshore "APOLLAKS GRUP LTD" on which eight legal persons are in total issued.

The offshore itself is registered with a certain Artem Negroenko. A businessman with such data led Moscow LLC Arena Invest and LLC Spetstranservice. In the first until January 2019, he was listed as a founder. The 100% founder of Spetstranservice is Vector Rail, which is related to Alexei Teicher (he was the founder of the predecessor of this organization).

It turns out that Negroenko is most likely Tycher's man, and therefore an offshore company into which budget money can flow - his brainchild.

By the way, Tycher can, through Arena-Invest, be related to the now bankrupt Tula company, the supplier of government agencies in the Tula region, DSK Avtodor LLC. So Tycher apparently collects money from all over Russia. 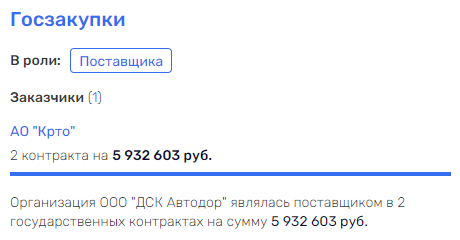 Sources say that some time ago the trail of Saffranik could also be seen by the microfinance organization Vebbankir. He allegedly stood behind the offshore, for which the company was registered. Whether he was there or not is not so important because Tycher is still listed as a co-owner. Judging by financial indicators, profit can also be withdrawn from the company.

Connections from Tycher affect no less influential Salman Babaev, also the ex-vice president of Russian Railways, whose dismissal was influenced by the Prosecutor General's Office of Russia, which found out that the top manager of the company lobbied for the interests of his businessman sons, RBC wrote.

There are rumors that it was with the filing of Babaev that Tycher received high posts in Russian Railways - including an adviser to the head of Russian Railways. Still, Tycher was a member of Babaev's team at the time when he headed the First Freight Company.

Tycher not only worked with Babaev in Russian Railways, but also participated in the family's business. For example, he and Babaev's son Timur are listed as the founder of Vector Rail, now liquidated due to claims from the FAS. Moreover, although Vector Rail was liquidated, the office became the founder of the new JSC of the same name. The general director was the same Yulia Tersaakova, who held this position in the "collapsed" company. It turns out that in fact, Tycher and Babaev could simply "jump" on the horse of the same name, once again demonstrating a "respectful" attitude towards the FAS.

As The Moscow Post wrote, both of the above characters can be directly related not only to rail transportation and business, but also to the case of the former head of the Astrakhan customs, Ildar Saidov, who was sentenced to seven (as symbolic, if you recall the situation with Zotov) years in prison just a week ago.

All cheese-boron began precisely because of the ship belonging to the Transfin-M, which Saidov released from the port for a bribe, was arrested somewhere. So Tycher and KO saved about 80 million rubles, for which the tanker "Heinrich Hasanov" was going to be fined, and for some reason only Mr. Saidov sat down for this.

What's more interesting is the port where the action took place. When it first began to develop, significant freight flows from Russian Railways began to wrap there, and, as the Watermelon Tudei newspaper writes, the railway set tariffs for delivery to Olya at $2 more expensive than to Astrakhan. Isn't it because Babaev then invested in the development of the port, who, together with Taicher, lobbied for the interests of the project from Russian Railways?

The FAS drew attention to the scheme, which noticed that in four months Russian Railways redirected 147 thousand tons of ferrous metals, and city port workers lost $600 thousand. In addition, for many years in relation to Olya, there was lobbying for the creation of a special economic zone - read, entrepreneurs could count on state benefits, which, taking into account the size of the port, would allow its "holders" to save billions of dollars.

And businessman Jamalin Pashayev, who rented ships through his Transmorflot and in general is the main owner of the port of Olya, could help them.

The call of the edges of the distant...

But all this "raspberry" risks ending. And not so much the mitigation of the sentence of Zotov plays a role here, but the fact that a similar situation happened not only with him. And the other businessman Roman Trushev, who turned out to be at the broken trough, allegedly because of the actions of Tycher and the team, gathered and presented to law enforcement officers incriminating evidence on all this friendly company - The Moscow Post wrote about this earlier.

There we are talking about collusion with the structures of the head of "Welfare" Yuri Novozhilov. In this regard, there is an opinion that Tycher and his associates may soon face the claims of law enforcement officers.