Without a corner on the Patriarchs: Hotel for the Deputy Prime Minister, and what does Tatyana Golikova have to do with it

The families of Deputy Prime Minister Tatyana Golikova and her husband Viktor Khristenko may be behind the purchase of elite real estate in the capital. Hotel Marco Polo on Patriarch's Ponds is part of the business empire.

The families of Deputy Prime Minister Tatyana Golikova and her husband Viktor Khristenko may be behind the purchase of elite real estate in the capital. Hotel Marco Polo on Patriarch's Ponds is part of the business empire.

The expensive Moscow hotel Marco Polo Presnya has a new owner on Patriarch's Ponds. According to the results of the auction, it was the Management-Invest company. The transaction amount is 2.75 billion rubles. It is much more interesting who, with such money, is behind the purchase of an asset, the correspondent of The Moscow Post reports.

With a high degree of probability, the family of Deputy Prime Minister of the Government of the Russian Federation Tatyana Golikova and her husband, former Minister of Industry Viktor Khristenko, is behind the deal. This is indicated by a number of circumstances.

First of all, we note that the company that bought the hotel - Management-Invest LLC, was created only in April 2022. That is, apparently, precisely for this deal. The owners are hidden - formally it belongs to a closed mutual investment fund. And this fund is managed by a remarkable structure: LLC UK K2 Group.

The structure is 100% owned by businessman Anton Petrovich Pak, who also leads it. The management company does not have revenue, but it has a loss for 2021 in the amount of 4.6 million rubles. The carrying value of assets is 45 million rubles. But at the same time, the authorized capital is over 60 million rubles.

At the same time, a number of organizations are in its management, of which the ears of Golikova and Khristenko literally stick out. The latter, as you know, after leaving the civil service, became a big golf lover. According to Novaya Gazeta, the land under his golf possessions alone costs billions of rubles. How will he receive such money in the civil service? Or maybe the point is in the lobbying capabilities of Tatyana Golikova, who has long been trying to attribute the patronage of the company to a family friend, and also to pharmaceutical magnate Viktor Kharitonin?

In the management of LLC "UK" K2 Group, "as they said, there are a number of organizations, many of which can be suspected of fictitious. According to Vedomosti, one of these companies, Stoleshniki LLC, is associated with Viktor Kharitonin, a family friend. 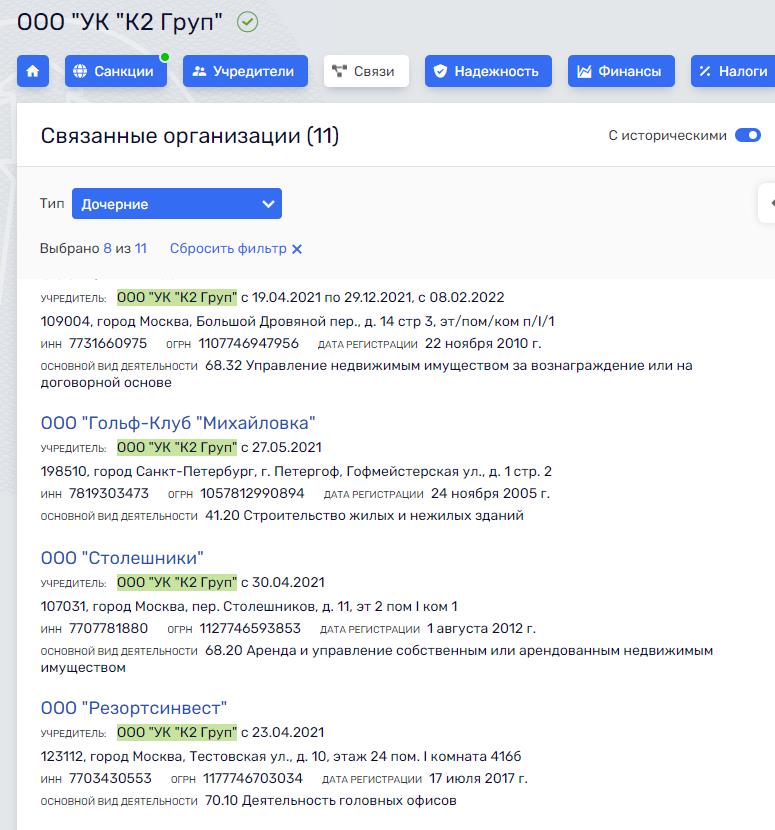 But if you look for connections, there is an easier way. Among the companies managed by LLC UK K2 Group, and Mr. Pak, it is easy to find LLC Golf Club Mikhailovka. It is this club that Novaya Gazeta connects with Viktor Khristenko, the wife of Tatyana Golikova.

As of spring 2018, the club belonged to Nika from Moscow, which was owned by Lifinvest. The director of the latter was Alexander Kotelenets, who worked as an assistant to Khristenko at the Ministry of Industry and Trade.

All this is confirmed by records in the Unified State Register of Legal Entities. Now the club belongs to the same ZPIF as the aforementioned Stoleshniki LLC, which they are trying to connect with Viktor Kharitonin.

At the same time, Mr. Kotelenets is still in charge of Lifevest, whose place in Nika was taken by offshore. As for his work as an assistant to Khristenko, this is a well-known fact, it is reflected in a whole series of media publications. 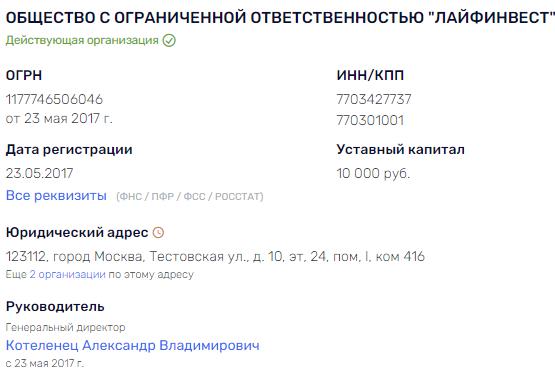 It turns out that the circle is closed - from Khristenko-Golikova to Kotelenets-Kotelenets and back? But that's not all. After all, another office related to golf may also have access to Mr. Khristenko and his influential wife. We are talking about Anton Pak, managed by the same LLC UK K2 Group, Peterhof Golf and SPA Resort LLC.

The structure is very suspicious. Neither revenue nor profit, minus value of assets, one person in the state and 10 thousand authorized capital. But what kind of person is this? The director of the structure is Konstantin Borisovich Tolmachev.

And he was the leader in the aforementioned LLC "Golf Club" Mikhailovka. " Did you close the circle again?

At the same time, another interesting detail. It turns out that Anton Petrovich Pak is the former chairman of the board of directors of the once state-owned pharmaceutical company Nanolek. The one that today belongs to the Cypriot offshore company Nanolek Holding Limited has government contracts worth almost 10 billion rubles. 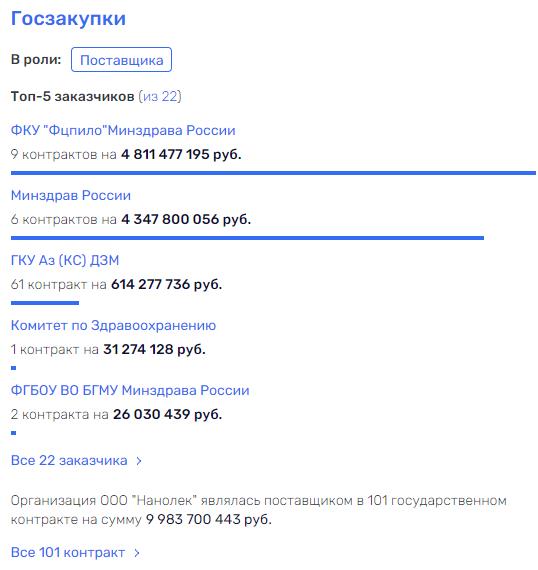 And which is also directly related to Mr. Khristenko. Previously, part of the shares belonged to the state corporation Rusnano. But it was bought out by the aforementioned offshore company in 2019. And the direct beneficiary of the offshore, according to Kommersant, is Vladimir Khristenko, who is also the president of the structure. And he is the son of Viktor Khristenko and the stepson of Golikova.

Belonging to the offshore suggests that budget money from state contracts has long been outside the country.

What is even more interesting is that it seems that Pak's participation in the story with Nanolek is trying to hide. When searching the Internet, the first line is information about Pak's chairmanship from the Nanolek website. But when you go to the site, this page is missing!

That is, someone deleted the data. But the Internet remembers everything. And in the Google cache at the time of the publication of the article, information about this could be safely found. 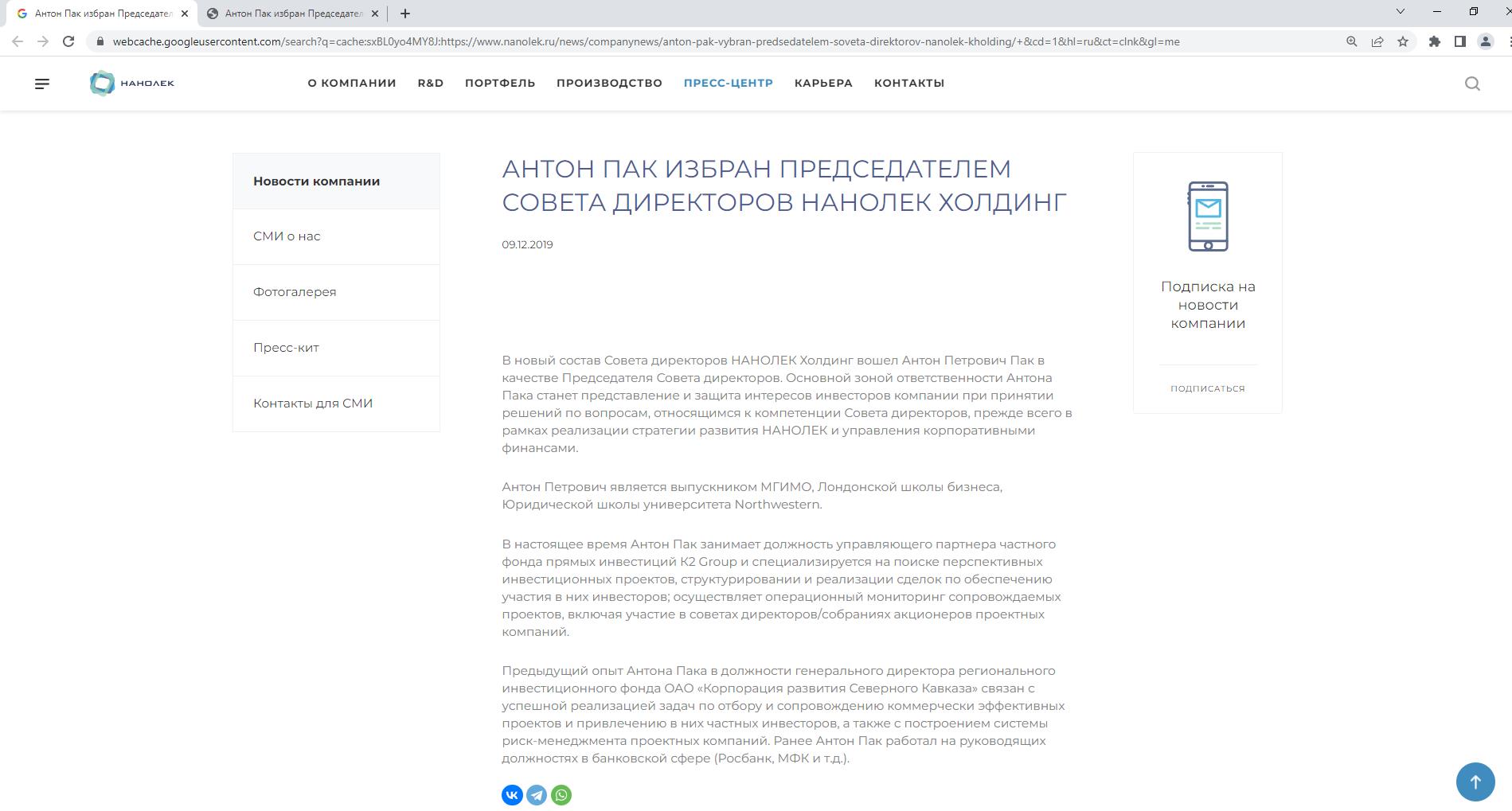 The Moscow Post has repeatedly written about the connection of the Golikova and Khristenko family with Nanolek, as well as about the privatization of this structure.

Recall briefly: Nanolek was created in 2011, when Tatyana Golikova later headed the reorganized Ministry of Health and Social Protection. Therefore, it is not surprising that in 2012 Vladimir Khristenko, the son of Tatyana Golikova's husband Viktor Khristenko, entered the company as an investor. He and Mikhail Nekrasov own 67% of the company, the rest is from Rusnano Anatoly Chubais.

Initially, Nanolek could be financed from state funds received by Rusnano for the development of pharmaceutical preparations based on nanocarrier. That is, now the private business of Golikova's stepson from the very beginning of his work mastered state budgets. This, apparently, is still busy.

In addition, the already mentioned stepson of Golikova, Vladimir Khristenko, who is allegedly the direct beneficiary of Nanolek, was previously credited with working in the structures of JSC Pharmstandard Viktor Kharitonin, a family friend. For a long time, they tried to explain the business successes of the latter by the proximity to the family of Tatyana Golikova, who oversees the entire social block of the Government, including the Ministry of Health.

Today, the pool of state contracts of the head structure of Kharitonin alone, Pharmstandard JSC is almost 450 billion rubles. Most of it - 190 billion rubles - from the Russian Ministry of Health, which is supervised by Social Deputy Prime Minister Tatyana Golikova. 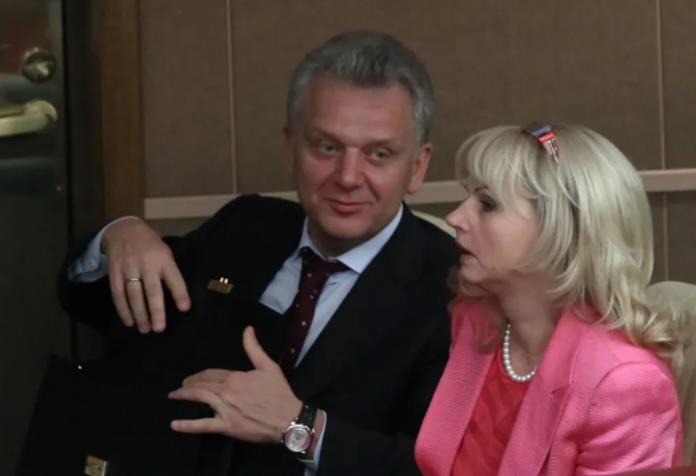 If all our calculations are correct, and the family of Tatyana Golikova and Viktor Khristenko is really behind the purchase of the Marco Polo hotel, the question arises, why do they need so much property? After all, it would seem that both money and real estate are enough for comfortable old age. The answer may be prosaic - I want and can.