With whom does Delimobil share: Sobyanin subsidizes another expansion in the name of Liksutov?

Deputy Sergei Sobyanin Maxim Liksutov continues to "eat from the same plate" with his comrades from Delimobil and Avilon. Is another "cut" of the budget planned?

The car-sharing company "Carsharing Russia," which owns the Delimobile fleet, plans to collect investor applications for the purchase of bonds worth 3 billion rubles at the end of July. Purely logically and as the manufacturer himself claims, this should help the company further strengthen its market position, expand and modernize the fleet.

In fact, money that may turn out to be partially or completely budgetary may flow in a completely different direction. The Moscow Post correspondent understood the situation.

Favorites of the City Hall

We previously wrote about how the "world of car sharing" is arranged under the wing of the close mayor of Moscow, Sergei Sobyanin, the head of the Moscow Department of Transport, Maxim Liksutov. In fact, a company registered in Luxembourg receives preferences from the state, subsidies, advertising, including from senior officials. Budgets can be safely withdrawn offshore.

If you look at the financial performance of the company - with a generally seemingly favorable picture, in fact, they make you think about where the money goes. In 2020, Carsharing Russia suffered losses of 2.4 billion rubles. 2021 was submitted to the media from a positive point of view - after all, a loss of 436.8 million is about five times lower than last year. But still he was.

Despite the gigantic tariffs for renting cars in the service (for many it reaches 18 rubles per minute), and support from the government. Only at the end of last year, the Moscow authorities subsidized taxis and car sharing for 256 million rubles. 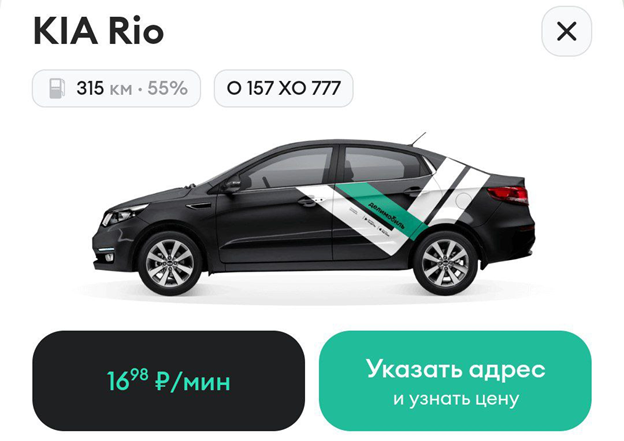 "Carsharing Rus" in the Russian market since 2015. And oddly enough, he is not going to leave the market after other foreign companies. Apparently, she is well fed here. The head structure of the owner of Delimobiles abroad, Mikro Kapital, is rumored that its partner Denis Saklakov is a close friend of Liksutov. Is it not thanks to this that car sharing has become so forgotten by the Moscow authorities?

There is another thread leading directly to the vice mayor. The delivery of machines for Carsharing Rus is carried out by Avilon. The director of corporate sales and deputy general director at Avilon Automobile Group CJSC (Avilon AG) at one time was none other than Dmitry Pronin, Liksutov's deputy. Could it be that, supporting the manufacturer of Delimobiles, the Moscow government supports the Liksut "feeder," in which no matter how much money you pour - everything will flow out from another edge?

Pronin, by the way, literally in May of this year, was appointed head of the newly opened Moskvich plant. There he will represent the interests of the same "company of friends" from Liksutov, Varishavsky and Avagumyan?

Avilon AG itself is a very scandalous structure, an almost monopolist of the car market, a manufacturer of luxury models on which the richest people of Russia travel. In addition, she is a supplier in 2201 state contracts in the amount of 31 billion rubles! The largest customer, the Ministry of Internal Affairs, spent more than 5.5 billion rubles on purchases from Avilon AG. 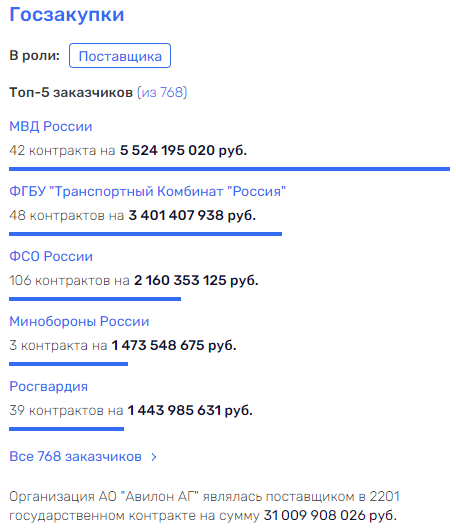 By the way, by the end of 2021, the company was registered for the British offshore. Does the Moscow government have such a passion - to be friends with foreigners? Or is it so easy to withdraw budget money abroad?

The beneficiaries of Avilon are entrepreneurs Alexander Varshavsky and Kamo Avagumyan. The personality of the latter is associated with the business of the family of ex-prosecutor Yuri Chaika. Avagumyan himself is also spinning somewhere nearby. He is the official representative of the Prosecutor General's Office of Armenia in Russia. Hence, apparently, the connections. These guys are known for their aggressive expansion in the market. They crushed the Independence car dealer when he started having problems, about the same with the Genser car dealer. There are rumors that the criminal case against Renault founder Sergei Petrov and the further sale of the Klyuchavto car dealer also occurred not without the help of Avilon, who was trying to squeeze out a competitor. Petrov stated that Varshavsky offered him to buy a business at half price - wrote RBC.

At the same time, the sphere of interests of the two gentlemen is not limited to machines. They recently started selling yachts. The first of them was bought by Warsaw himself. You see, what amounts can we talk about if he so simply took and laid out money for a yacht?

A greenhouse business is also affiliated with businessmen. We are talking about the company TD "My Summer," the products of which are sold in all federal networks. Many non-core investors began to engage in greenhouse vegetable growing in 2015, because the state issued preferential loans at an average rate of 3.3% per annum and compensated for 20% of the costs of building greenhouses during commissioning. So did Agro-Invest (managed by TD My Summer), having received 1 billion rubles from the state for the construction of greenhouses.

By the way, the company was headed in 2019 by Yegia Asatryan, the son of Artur Asatryan, who was put on the international wanted list by the Italian authorities in 2013 on suspicion of the murder of thief in law Aslan Usoyan (Grandfather Hassan), Company reported.

Warsaw at one time was also engaged in "earthly affairs." Through his company "Agricultural Transport," he acquired land, which then, by agreement, suddenly needed the state. The latter rented the territory for 232 million rubles. An accident or a plan invented in advance?

All roads lead to Moscow

Let's go further. Avagumian's middle son Karen owns Rico and Alpha Grant. Both companies are engaged in route transportation in the capital. As subsidies, the company received 3.12 billion rubles from the Moscow government.

The youngest son Hamlet owns "MCM-Logistic" - engaged in garbage collection. Against the background of scandals with landfills in Balashikha (we are talking about the Kuchino landfill, which local residents complained about on a direct line with the President of the Russian Federation), the company's revenues did not decrease at all, and from the Moscow government it received 40 billion rubles under a contract for garbage collection for the next 15 years.

Let's summarize. Varshavsky and Avagumyan supply cars "Carshering Russia," which is at least "Avilon" enchanted by the Moscow authorities. At the same time, a completely Luxembourgish company is not going to leave Russia anywhere and only continues its expansion into the market. Moreover, to purchase bonds with total losses for 2020 and 2021, it, apparently, will once again be with the support of the Moscow government and its "rubber" budget, consisting of our taxes with you.

And in the benefit of this, it is by no means consumers who pay the "horse" rate for using the service, and not road users, whose courtyards are already forced by "Delimobiles" all the way around. Will Maxim Liksutov and his team live? The latter, perhaps, also wants an expensive yacht, like Warsaw's...