With Tsarev "in the head," or the first after Gref

Together with his deputy Kirill Tsarev, German Gref risks bringing Sberbank to zero?

Against the background of economic turbulence, the recent statement of the first deputy chairman of the board of Sberbank, the closest associate of German Gref Kirill Tsarev, was optimistic.

The latter reported a decrease in the down payment on mortgages from Sberbank for secondary housing from 10% to 15%. The fact that the overwhelming majority of the population with Sberbank salary cards does not even have money to pay for utilities probably does not care about the official.

After all, the earnings of Kirill Tsarev himself, who oversees work with individuals, seem to have long allowed him to resolve the housing issue - both for himself, and for his family, and for descendants up to the tenth knee. And the big question is in which country he has real estate.

How lives with state money and large assets "the first after Gref" - the correspondent of The Moscow Post understood.

At the beginning of the year, the former first deputy chairman of the board of Sberbank Lev Khasis quickly escaped from the country. It quickly became clear that Mr. Hasis had a business in the United States - the Momentum group, which was presented as a space startup. As follows from the documents walking along the network, Khasis acted as the founder, and owned the structure of his wife Olga. Moreover, immigrants from the Pentagon were involved in the company's activities.

After Herman Gref was forced to make excuses for managers running for fear of SDN sanctions, which involve blocking accounts and assets in the West. It turns out that Mr. Gref indirectly admitted that his most beautiful environment can have such assets.

And in May 2022, Kirill Tsarev, who became the first deputy chairman of the board after the "retreat" of Khasis, fell under Western sanctions. Could Mr. Tsarev really have foreign assets. In addition to Khasis, Sberbank (and maybe the country) has already left the board members Sergei Maltsev, Alexander Buriko and Natal Alymova and Bella Zlatkis. Kirill Tsarev is the next one who can run to save his money away from the state bank?

However, if he has assets, they are unlikely to be recorded on him personally. In addition, this can only be an "additive," because his family and in Russia is perfectly engaged in business for hundreds of millions of rubles. And who will believe that without the help of an influential relative?

As follows from the data of the Rusprofile information system, the total cost of the companies established by Tsarev for 2021 is 36 million rubles. Although in 2019 it was less than a million. It turns out that in three years the Tsarev family was literally pumped up with money.

The alleged relatives of Kirill Alexandrovich are even better. For example, Anna Vladimirovna Tsareva, who may be his close relative, has a total value of companies exceeding 56 million rubles. Moreover, in 2017 it was completely negative - minus 900 thousand rubles. It turns out that in five years Anna Vladimirovna has enriched herself by tens of million rubles?

Mr. Tsarev himself acted as the founder of three companies. One of them - a non-profit country partnership, has already been liquidated, but the other two - Renthal-Group LLC and Renthal Tech LLC - are working to the fullest.

The most interesting fact is that Kirill Tsarev himself was the owner of Renthal Tech LLC until April 2022. Moreover, his share, apparently, was not in trust, despite the fact that he was the top head of Sberbank, a state institution - read, an official.

It is easy to assume that such "gestures" could be associated precisely with the upcoming sanctions "attack" on the leadership of Sberbank. The shares were prudently rewritten to the same Anna Vladimirovna, as well as Timur Kirillovich, the alleged son of Mr. Tsarev.

Mr. Tsarev turned a similar somersault with the head structure of Renthal-Group LLC, which owns 49% of Renthal Tech. Only he did it much later - in August 2022, already when he was under sanctions. As they say, the main thing is to know the time and place.

In the case of Renthal Tech, Oleg Malakhovsky, who is also the director of the office, entered the capital of the structure. According to rumors - a close friend of the family. But it is much more interesting that Marianna Orlova came to Renthal-Group to replace Kirill Tsarev as the founder.

And this person is clearly not easy - it was she, together with Kirill and Anna Tsarev, who co-founded and then liquidated the non-profit dacha partnership "Tsarevo."

Apparently, we are talking about the long-standing friendship and neighborhood in the country. But another thing draws attention to itself: Ms. Orlova also co-founded both Rentals. And also - until late autumn 2021, she was a co-owner of Vostok shopping center LLC - a structure that deals with car trade.

And the total value of the companies to whose institution Orlova was related reached, in 2021 reached 362 million rubles, doubling in five years. At the same time, Ms. Orlova left the founders only in 2021.

It would seem that this is what people are just doing business. But there are many car dealers, and not everyone receives government contracts. Vostok had 175 million rubles worth of them.

Moreover, most of the contracts are with state structures from St. Petersburg - the hometown of Kirill Tsarev. Apparently, society should believe that Mr. Tsarev has nothing to do with their receipt. 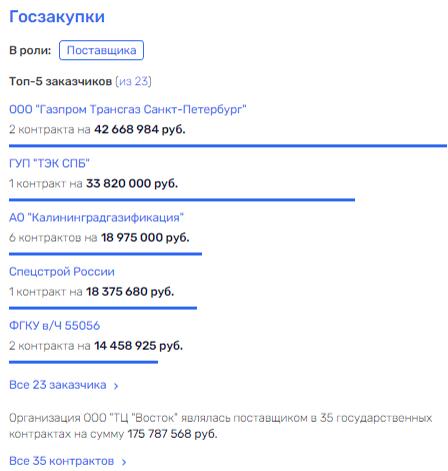 But 175 million, 362 million rubles are all little things compared to the turnover, which can be hidden inside the structures associated with the Tsarev family.

Speaking specifically for Vostok, the company's revenue at the end of 2021 amounted to an immodest 4.8 billion rubles. But the profit is simply ridiculous - 5.2 million rubles. The price of one middle hand of a foreign car. Is everything really so bad in the structure, or can they just hide and withdraw profits to pay less taxes?

At the same time, the connection with Rentals at the Vostok shopping center is much stronger than it may even seem with cross-founders. After all, shares in the structure were owned by the remarkable company Renthal Units LLC, which left the number of co-owners on the same day as Marianna Orlova - September 17, 2021.

Renthal Units LLC is a subsidiary of Renthal-Group LLC, where it has 50%. And the turnover there is much higher than in other "Rentals" - at the end of 2021, the company received revenue of 1.5 billion rubles. At the same time, revenue has been growing since 2018. But the profit, which in 2021 amounted to a modest 13 million rubles, has been steadily falling since 2019. How can this be?

The company is engaged in construction work. She also has state contracts - only 182 million rubles. And again - and here is the first deputy chairman of the board of Sberbank Kirill Tsarev? At the same time, the company participated in court cases totaling 62 billion rubles. 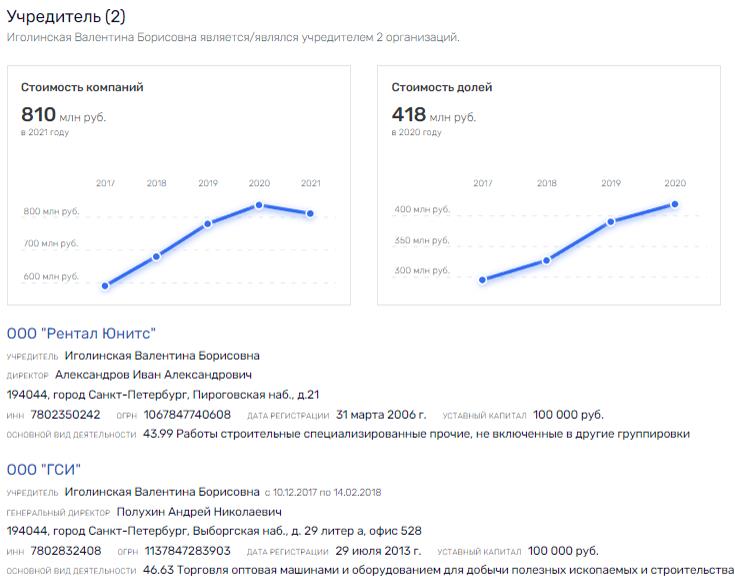 The co-owner of Renthal Units LLC is Valentina Igolinskaya. She also acted as the founder of GSI LLC - she is also engaged in the sale of cars with turnover of hundreds of millions of rubles. Now the company is owned by Anna Vladimirovna Tsareva and Olga Schleicher, already familiar to us.

Returning a little back to the Vostok shopping center, after the Tsarevykh exodus, he also had a new co-owner - LLC TK Azimuttrans, which was recorded on Alexei Zubkov. With an authorized capital of 10 thousand rubles and only 10 employees in the state, the structure's revenue at the end of 2021 amounted to 7.4 billion rubles.

Is it not there that the capital and assets of other structures, one way or another connected with the Princes, merge?

Of course, these are not all structures to which the alleged relatives, partners and neighbors in the dacha of the first deputy chairman of Sberbank have or were related. But even when looking at them, it turns out that a family can have a whole business empire in the field of real estate and motor vehicle trade.

Working with Gref - to money

All this leads to a natural question - is German Gref himself aware of such cases? And is Mr. Tsarev not the holder of part of his own assets, which could to some extent explain why Kirill Alexandrovich did not follow the voluntary expulsion after Lev Khasis?

It seems that everyone who worked closely with Gref is in business. The same can be said about another former associate of the banker, and now major businessman Ashot Khachaturyants.

After Gref was appointed CEO of Sberbank, he offered Khachaturyants the position of CEO of Sberbank Capital, a subsidiary of Sberbank. At the same time, he was a member of the board of directors of Russneft of the debtor of All Russia Mikhail Gutseriev. For some reason, German Oskarovich did not see any conflict of interest in such work.

At Sberbank, Khachaturyants worked from 2008 to 2021. That is, its outcome from Sberbank just almost coincided with an increase in sanctions pressure on the bank and our country as a whole, which also suggests that Khachaturyants may have foreign assets. Or are these not his assets, but the assets of Herman Gref himself?

Not so long ago, Ashot Khachaturyants got hold of new assets - the Hydrometallurgical Plant (now Almaz-Fertilizers), which its previous owner, according to some market participants, could receive illegally. How many more assets are stuffed into the pockets of the closest associates of German Gref - it is difficult to even assume. And counting the wealth hidden in them will surely be even more difficult.