Will Tikhonov's "systems" lead to oil?

Is the criminal case of the Deputy Head of the Ministry of Energy Anatoly Tikhonov getting more details and may threaten him with new charges?

As the correspondent of The Moscow Post reports, criminal case against Deputy Minister of Energy of the Russian Federation Anatoly Tikhonov, who is called the "grey cardinal" of the Ministry, added new defendants. Eight other people may be involved in the case of embezzlement of more than 713 million rubles allocated for the creation of the state information system of the fuel and energy complex (GIS TEK). Among them is Tikhonov's civil wife, Valeria Kovalenko. She, according to investigators, led the shadow accounting of the official and withdrew money to a Latvian Bank.

But the reason that the investigators seized on may be just the beginning of a huge "corruption" tangle. It is possible that the next step will be the emergence of a new criminal case related to oil. After all, according to new information, the monthly income of the "grey cardinal" could be $5 million. It is clear that the official provided himself with such money not by GIS TEK only…

According to sources of the Kompaniya magazine, Tikhonov will soon be claimed with another charge, but what it is connected with is not yet specified. In addition, according to the publication, the informal monthly income of the Deputy Minister could reach $5 million.

Where does this money come from? And, taking into account the scope of real estate that Tikhonov and his civil wife have, it was not millions from "IT" alone. Let us recall that the other day searches were conducted in two apartments of the couple Tikhonov and Kovalenko in Maly Kozikhinsky lane, near the Patriarch's ponds in Moscow and a luxury mansion in the village of Nikolina Gora on Rublevsky highway in the Odintsovo district of the Moscow region. Investigators also found an apartment in France, but the money in the accounts, that's a shame, was not found, Kommersant wrote.

"Tangle" of the Ministry of Energy

Despite the resonance of the case, the now former Minister of Energy Alexander Novak, who was just appointed to the post of Deputy Prime Minister, was in no hurry to write Tikhonov off. Does he believe that he that the latter will get away with it as a result?

Otherwise, how can it be explained that Novak did not dismiss the official, and Tikhonov continues to be listed as a Deputy Minister on the Ministry's website? 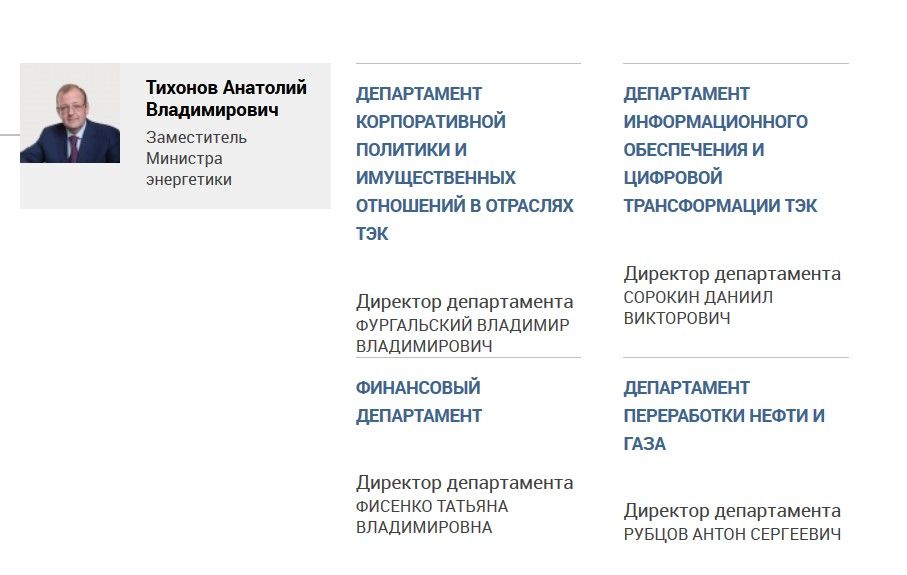 At one time, it was believed that it was Novak who brought Tikhonov to his office. But the most important patron, it was said, was former Deputy Prime Minister Alexander Khloponin. Tikhonov and Khloponin worked together in the Krasnoyarsk territory: where the first was the Deputy Governor of the second. It was rumoured that muddy schemes were being rolled out in the region with special activity at that time, and evil tongues even attributed Tikhonov's nickname - "Tolya thirty percent". Saying, so much he took from entrepreneurs after the distribution of "fat" state contracts.

At the same time, he met Novak, who worked in a similar position. They are even spiritually related - they are godparents of each other's children.

But apparently Tikhonov decided to take his interest from oil as well.

At that time, Russia accounted for about 300 million barrels from Iran. The price reached $2 per barrel by those standards, which is about $600 million. Thus, Tikhonov's "income" could amount to $600 million!

It was rumoured that the power engineer allegedly had a reliable roof in the oil business in the person of the structures of the former co-owner of the Moscow oil refinery Ruslan Baisarov, a close friend of the Head of Chechnya Ramzan Kadyrov. This is quite likely, since the case for the "laundering" of Iranian oil has not been opened.

Before his arrest, Anatoly Tikhonov met with the Iranian Ambassador to Russia Kazem Jalali and talked about the possible implementation of joint projects. A little earlier, Tikhonov spoke with representatives of Iran, including the question of possible oil supplies from the Middle Eastern country. Anticipating, did he close his own questions?

However, his civil wife, as Kommersant called her, was also said to close her business, knowing that they would come. It is rumoured that before her arrest, she made about a hundred flights abroad.

Initially, it might seem that Tikhonov was "grabbed" for nonsense, but the further, the more details are revealed. Now eight suspects have already been counted for embezzlement of more than 713 million rubles during the implementation of the GIS TEK project.

The evidence for the scam was allegedly given by Roman Shcherbov, the head of the GIS TEK project. A few years ago, he was arrested for extorting a bribe of 40 million rubles, so he decided to "butter up" his terms.

Money, according to the Kompaniya magazine, was transferred to the accounts of the shadow accountant Golovko through the Latvian Bank ABLV to the accounts of "own" companies Impexcom Inc and Fortsmile. And then, allegedly, the investigators have information about the transfer of $2.5 million and 2.1 million euros to the account of the offshore company Archuleta SA, controlled by Tikhonov.

The investigator indicates Tikhonov's civil wife to be another shadow accountant of the group. Allegedly, Valeria Kovalenko transferred $178 thousand and €164 thousand to her account in the same Latvian Bank.

Taking into account that Tikhonov has had a very long relationship with Kovalenko, and according to some information they are raising a child together, she could take part in all his possible monetary transactions.

Past achievements of Tikhonov

However, even this is not the only case in Tikhonov's track record. In 2014, the Minister of Energy Alexander Novak, for some unknown reason, proposed to transfer all the functions of the state customer for the energy of the Crimea to the REA, which was supervised by Anatoly Tikhonov, on a non-competitive basis.

And there was a question of creating a Crimean energy bridge in order to make the Peninsula independent of electricity supplies from Ukraine. The total cost of Crimea's energy independence was 177 billion rubles. There was an assumption that the funds "flowed" into someone's pockets, because the project became more expensive and was constantly delayed. Its implementation time is 1.5 years. It is considered that this time is too long.

But the Crimean history of the Ministry of Energy did not end there. An international scandal brought turbines for the Crimea, ordered from Siemens. However, the Ministry of Energy could not carry out the deal openly, and sanctions were imposed on the Russian Federation. Then they said that they were allegedly being built for Taman, and then it was found out that they had been transferred to the Crimea. Europe was indignant!

But this is not all the stories related to the Crimea. It was rumoured that Tikhonov brought his man there-Mikhail Silantiev, who headed the FSUE Promsyreimport. At one time, he wanted to put it on the supply of black fuel. However, experts of Kommersant were skeptical about the effectiveness of such a measure, noting that it would not solve the key problem — the high cost of delivering petroleum products. However, the experts were clearly thinking about the wrong marginality…

The company was still engaged in gas supply. But there was confusion with the financial indicators.

It seems that the investigators seized the "thread" and then continued to unwind this tangle. Will their trail lead to Tikhonov's ex-boss, Alexander Novak, who has just "landed" a new high post?