Will "Gazprom" go to the tokens?

The sale transaction of the "IRC" part, the subsidiary of "Petropavlovsk" company  may be a disguised withdrawal of money from its lender "Gazprombank".

"Petropavlovsk" has entered into a preliminary agreement with the investment company "Stocken", registered in Liechtenstein, on the possible sale of 29.9% of shares in the iron ore company "IRC" for $10 million. The transaction condition is the release of "Petropavlovsk" from obligations to guarantee "IRC" credit lines in "Gazprombank" in the amount of $234 million. Can this money be withdrawn into tokens?

"Gazprom" may get involved into a grand "scam", the alleged participants of which will be the companies: IRC, Alexey Sizov's "Stocken" and Nikolay Storonsky's "Revolut", the son of "JSC Gazprom Promgaz" general manager Nikolay Storonsky. At first sight, it is not clear how companies from Russia, Liechtenstein and the UK can be linked. However, some threads are visible.

The debt amount of $234 million is project financing from "Petropavlovsk" and "IRC" for the construction of the " Kimkano-sutarsky mining and processing plant".

It belongs to the Cyprus offshore company "KAPUSIUS SERVICES LIMITED", whose share has been pledged to "Gazprombank" since February 2019. 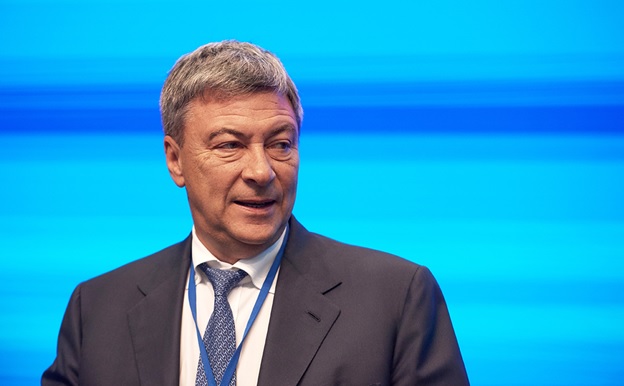 Can the head of "Gazprombank" Andrey Akimov transfer debts to tokens?

The money of "Gazprombank" could be withdrawn, since with revenue of 9.5 billion rubles, the loss of the mining and processing plant amounted to 3.1 billion rubles in 2018. Probably, this is why two years ago, a large shareholder of "Petropavlovsk", Kenes Rakishev, wanted to sell the "IRC" share of 31%. However, for some reason, instead, he sold his share in "Petropavlovsk" to Roman Trotsenko in July 2019, who in February of this year sold it to the owner of "Yuzhuralzoloto", Konstantin Strukov. The asset got into the right hands, but the company's debt had to be handled.

Finally, the buyer for the "IRC's" share was found. It turned out to be the investment company "Stocken". Back in July 2018, the company's general manager Alexey Sizov stated that investors would be able to invest in non-public companies that were not previously available for investment, and receive all related rights and payments at the stage before the companies' IPO. The first tokens for a Russian mining company (!) were planned to be issued in September - October 2018. This information was reported in "Iksmedia". The company from Liechtenstein has quite Russian roots.

How can" Stocken" and "Revolut" be linked?

According to "Finparty", Alexey Sizov was working for "Renaissance capital" in 1997-2006 and became the head of marketing and sales of financial instruments to Russia, Ukraine and Kazakhstan at "JP Morgan Bank" in 2006. In 2010, he became managing director and head of debt, currency and commodity markets at "UBS". A person with such a background could easily be engaged in blockchain technology and investment in tokens.

It turned out that the paths of Alexey Sizov and Nikolai Storonsky Junior's partner in the company "Revolut" Vladislav Yatsenko could cross. He also worked at "UBS Bank" since moving to London in 2010, as well as at "Deutsche Bank" and "Credit Suisse". He became acquainted with Nicholay Storonsky in the latter one.

Former "Revolut" financial Director Peter O'Higgins, who estimated the company in 2016, could be another connecting link between Alexey Sizov and Nikolai Storonsky. Previously, O'Higgins had been working for 12 years at "JP Morgan" and could intersect with Alexey Sizov.

Of course, all these facts may be coincidences, but, for some reason, it is hard to believe it, especially, if we consider the information that the company "Renaissance Capital" was founded by former employees of the Moscow representative office of "Credit Suisse First Boston" and, in 2004, when Alexey Sizov worked there, it became the organizer of a record-breaking "Gazprom" bond loan in the amount of 10 billion rubles. So, it is unlikely that Sizov is a stranger to "Gazprom".

An interesting company gathered around the deal. Perhaps, the money of "Gazprombank" has already been "cut", and now they are also going to transfer debts into tokens by purchasing a share in the "IRC" company. Why else would "Stocken" buy it? Can this be an attempt to hide the embezzlement of public funds?

Nikolay Storonsky Junior could have acted as an intermediary between "Stocken" and "Gazprombank" by means of his father. Who if not he, who recently became an official billionaire, can promote modern digital blockchain technologies to the older generation?

One thought unwittingly creeps in: at whose expense the banquet is? Have both "Revolut" and "Stocken" been created with "Gazprom's" money? Maybe, the company's management is slowly converting budget funds into tokens, isn't it?

"Stocken" and "Revolut" just perfectly complement each other. The first one is both a technical solution provider and an investment bank, helping investors invest in assets of selected and professionally evaluated companies.

The second one offers a bank card and an application that allows person to withdraw money in 130 countries in national currency without commission, as well as make cross-border transfers. Currency conversion at the interbank exchange rate is also provided without commission.

"SmartDec", which provides security audits can be a partner of "Stocken". There are no foreigners among its management and employees but indicated office addresses in the "Contacts" section are located in Israel and the United States. Although everyone understands that whatever can be indicated on the site while the programmers themselves can be both in Russia and in Ukraine.

Alexey Sizov described the advantages of modern investments to the site "X media": "one of the many advantages of tokens over traditional shares is security: it is impossible to fake a token on the blockchain. In addition, tokens are a very comfortable tool for institutional investors – with mechanisms similar to classic shares to protect the rights of shareholders, they are not tied to infrastructure and cross-border restrictions, and can offer a greater level of privacy, freedom of transfer, security and storage."

It sounds attractive, but what does this have to do with the share of the iron ore company that "Stocken" is supposedly going to buy? The terms of the transaction will be reviewed for 180 days. It will be concluded only after approval by "Gazprombank". Can anyone or anything prevent this?