Oleg Deripaska, a critic of the banking system of the Russian Federation, may be interested in buying Otkritie FC, but then the transaction will probably be blocked by the head of the Central Bank Elvira Nabiullina.

According to the correspondent of The Moscow Post, the main applicants for the purchase of the Otkritie FC group, 100% of which the Central Bank intends to implement, became known. According to media reports, these are the Gazprombank structures and the Region group close to Rosneft - Rossium Sergey Sudarikov (it owns the ICD).

Insiders are talking about the presence of a third, so far hidden interest - a representative of a large private business that does not currently have its own financial institution of this level.

The version is that the owner of Rusal and Bazel Oleg Deripaska, who just does not have his own bank, and recently has been an active critic of the Central Bank, the banking system and economic policy in the country, could be interested in the asset.

In addition, Oleg Deripaska owns a 10% stake in Ingosstrakh, the largest Russian insurance company (83 branches in 220 settlements). The acquisition of shares in FC Otkritie will help strengthen the insurance division of the entrepreneur's business empire due to Rosgosstrakh, a member of the Otkritie group of PJSC SK.

It cannot be ruled out that these assets will be sold separately by the Central Bank, in this case Deripaska may also become a candidate for their purchase. However, the main interest is still Otkritie Bank itself, into which at least 800 billion rubles of budget funds have been "poured" since the beginning of reorganization in 2017. 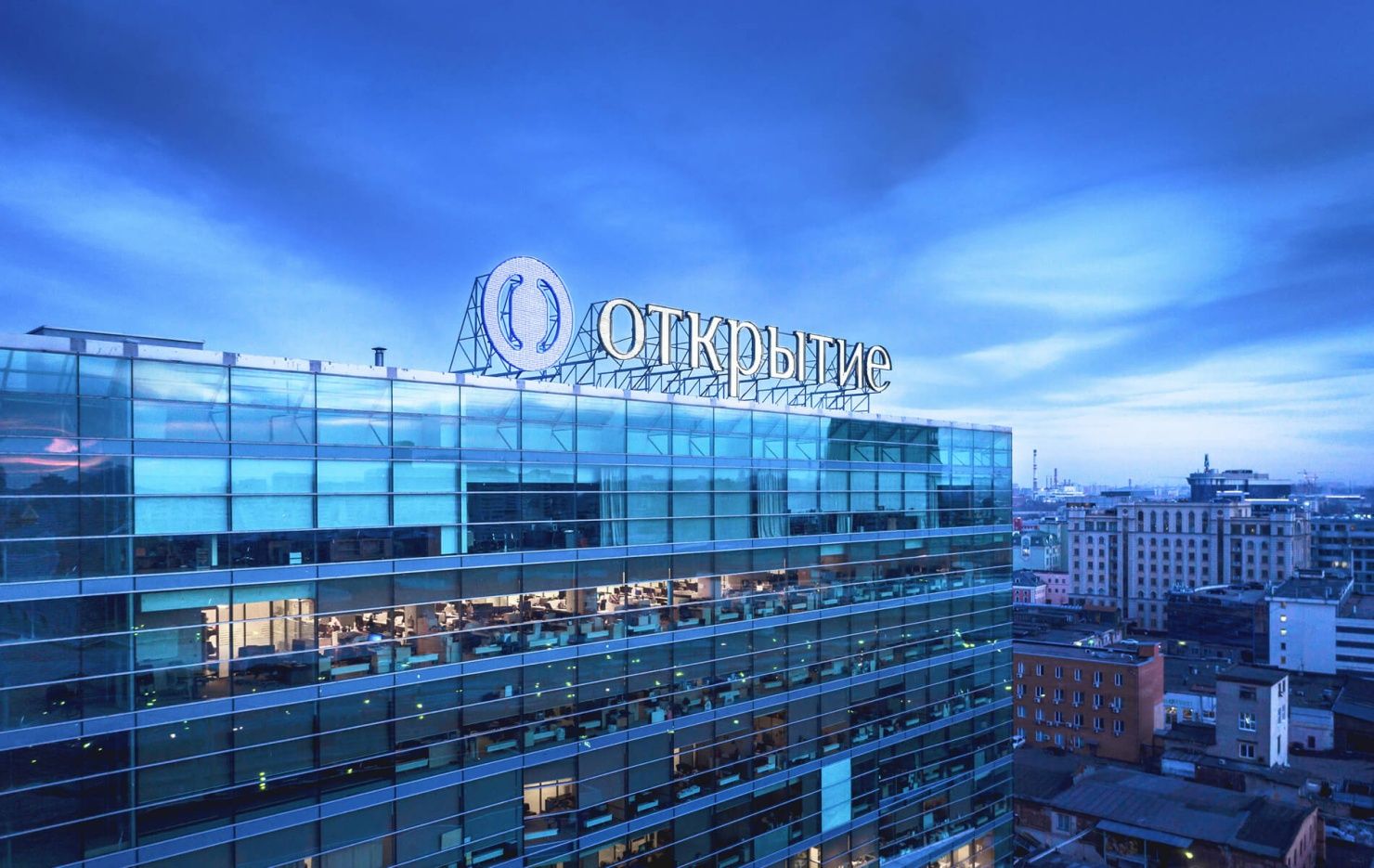 This is an unprecedented amount, the largest of those that the bank received as part of the financial recovery under the wing of the Central Bank Elvira Nabiullina. Now she does not want to sell the bank to state giants like Sberbank or VTB, supposedly glad for the expansion of the private sector in the financial market.

At the peak of the Central Bank

At mid-2021, the amount of assets of Otkritie FC Bank amounted to 539.2 billion. rubles, profit for the first half of the year - 36 billion rubles. This allowed the bank to take seventh place in terms of assets in the country.

The appearance of its own financial structure of this size will give Deripaska the opportunity to lend its own business and reduce dependence on loans from state banks, and other interests in the person of GPB and Rossium will take a significant part of the risks.

The topic of loans today for Deripaska is more relevant than ever. Now Rusal is trying to get 380 billion rubles from the syndicate of Russian banks and asks the authorities to give state guarantees for 70% of this amount. Money is needed for the environmental modernization of the four largest plants of the group. Even before that, in 2020, the holding of the entrepreneur En + pledged securities on a loan of 110 billion rubles. This money was needed by Oleg Deripaska's company to buy back shares from VTB.

Now the businessman takes 37th place in the Russian Forbes rating with a fortune of $3.8 billion. In addition to Rusal and the En + group, he has shares in Russian Machines, controls the Kuban agricultural holding, and has an extensive airport business, Basel Aero, and many other companies.

The acquisition of shares in the group will allow him to further diversify assets. But the correspondence skirmish with the Central Bank suggests that Deripaska's interest may also lie in the political plane.

The businessman is in a difficult relationship with the Central Bank and its head Elvira Nabiullina. We are talking about his dive about the macroeconomic policy of the regulator. Since 2018, criticism of the banking authorities from the mouth of the owner of Rusal has only increased.

There is nothing wrong with the desire to present your vision of solving problems in the country. But over the past 20 years, attempts by large businessmen to influence the country's policies and institutions through their ignorance as acquired capital have not ended in anything good for them.

In 2019, Oleg Deripaska, who was still under Western sanctions, noted a vivid speech at the Eastern Economic Forum, during which he proposed taking away some of the functions from the Bank of Russia, transferring them to the Federal Antimonopoly Service. 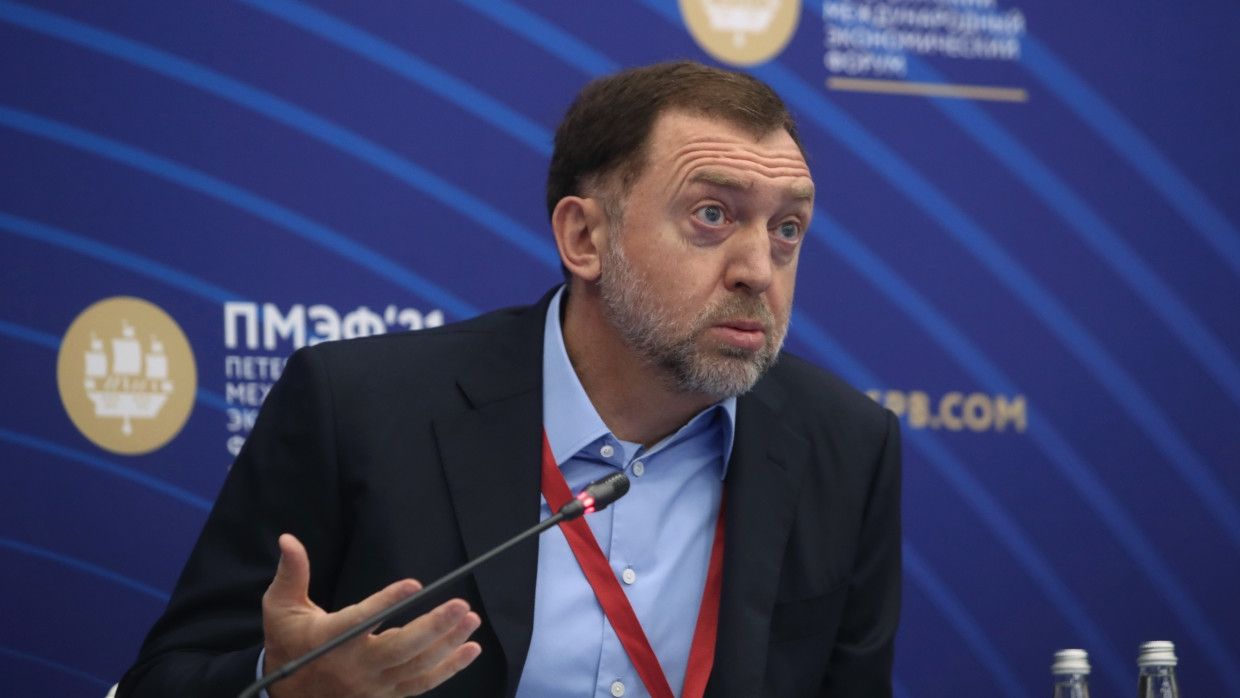 Among other things, the billionaire said that the transformation of the Central Bank into a "mega regulator" does not justify itself and kills competition, and independent banks decided to destroy it altogether. His words are quoted by Forbes.

On the sidelines, the businessman's position was perceived as an unequivocal challenge to the Central Bank and personally its leader Elvira Nabiullina. But the very authorities that Deripaska criticized previously tried to help him survive the sanctions pressure more easily.

At the end of 2018, the US Treasury obtained a deal from Deripaska, under the terms of which he lost control in the En + holding and the Rusal aluminum giant in exchange for lifting sanctions on part of his assets.

To whom it is a sin to complain

Earlier, the Government of Dmitry Medvedev repeatedly voiced various initiatives that involved preferences or the creation of preferential conditions for Oleg Deripaska's companies in the Russian market. But this was far from the first time that the Russian state extended a helping hand to him.

In February 2009, the debts of the GAZ group Deripaska amounted to 45 billion rubles. Half of them had to be paid in the first quarter. Rusal then also owed $14 billion to Russian banks, Basel Aero owed 20 billion rubles.

Another entrepreneur, Vladimir Lisin, who owns the Novolipetsk Metallurgical Plant, threatened Oleg Deripaska with bankruptcy. This development was also considered by the head of VTB Andrei Kostin.

It was difficult for Deripaska to agree with Alfa Bank, which was not satisfied with the proposed debt restructuring plan. But then Alexander Dvorkovich, an assistant to President Dmitry Medvedev, helped to agree in a constructive manner, because stopping Deripaska's enterprises threatened social problems on the ground.

Prior to this, in 2008, the state saved a 25% stake in Norilsk Nickel owned by Rusal from their transfer to the control of foreign banks, money was issued by one of the large state financial structures. Now Deripaska has the opportunity to become a major player in the banking market himself, to negotiate went to him already.

And this is if you do not stop at the "aluminum wars," ships with partner Vladimir Potanin, environmental and other scandals accompanying his activities. Of the glaring one cannot but note the constant voltage due to emissions of the Krasnoyarsk Aluminum Plant (part of Rusal), which produces 25% of primary aluminum in Russia.

Environmental modernization has been underway there for more than 15 years. But something is "underdeveloped." Apparently, there is underfunding, or the money goes not where it is needed.

At the same time, in 2020, the plant's revenue amounted to 70 billion rubles, but the company went into minus by 2.8 billion rubles compared to the previous period (plus 5.6 billion rubles for 2019). In 2021, due to a sharp increase in metal prices in world markets, the plant will have to play down the fall many times. But this is unlikely to make it easier for residents of Krasnoyarsk, already accustomed to the "black sky" regime.

While this is happening, Deripaska continues to give advice to the Central Bank. A new "round" happened in August 2021, when in his telegram channel he criticized the increase in the key rate to 6.5%. According to the owner of Rusal, now the business does not have the opportunity to develop due to expensive loans, which in turn will lead to a slowdown in economic growth and will negatively affect public incomes.

He also stated the need to expand the bond market in order to reduce the dependence of individuals and legal entities on banks. "Otherwise, we are slaves of banks," Deripaska concluded.

How many moral rights to talk about the banking system have a person conducting activities, mainly in Western offshore companies - a question, of course, is open. Moreover, Deripaska is forced to negotiate with foreign governments to ease the sanctions regime on its assets. 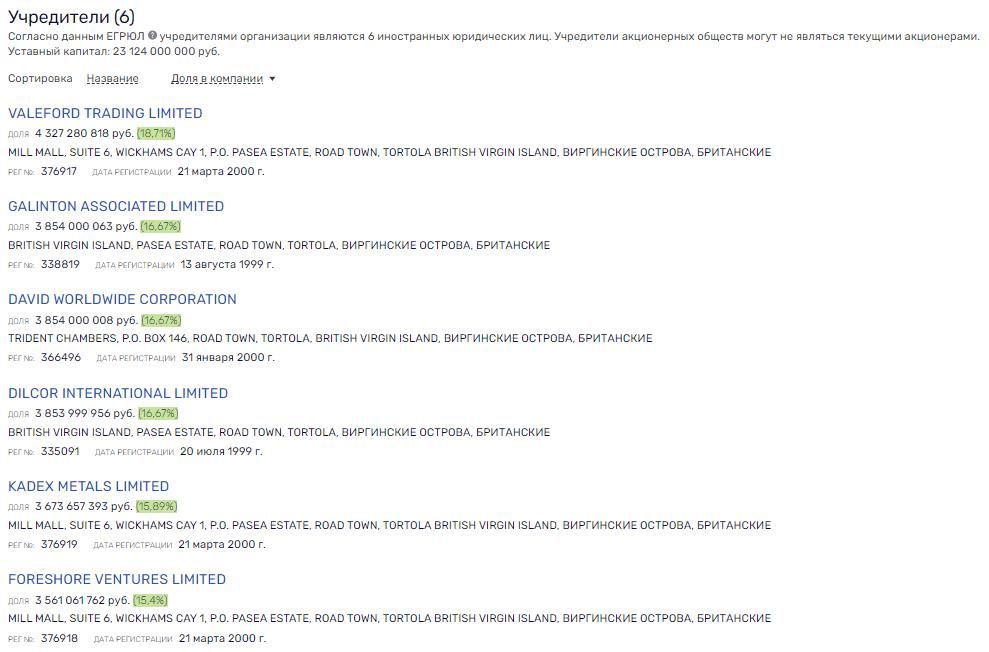 Now, for the "offensive" on the Central Bank, his hands are untied, because in 2019 the United States lifted sanctions from Rusal and En +. The main condition of the US Treasury was fulfilled: Oleg Deripaska controls less than 50% of these companies, and most members of the board of directors are not connected with him in any way and, moreover, are partly appointed by the US Treasury.

Presumably, all this is pretty annoying Elvira Nabiullina. She clearly does not want to share powers with either the Cabinet of Ministers or the FAS, or transfer the results of her works in the form of FC Otkritie to her ardent criticism. This means that in the event of Oleg Deripaska's possible interest in the asset, she can use an administrative resource to slow down or completely block the transaction involving the entrepreneur. 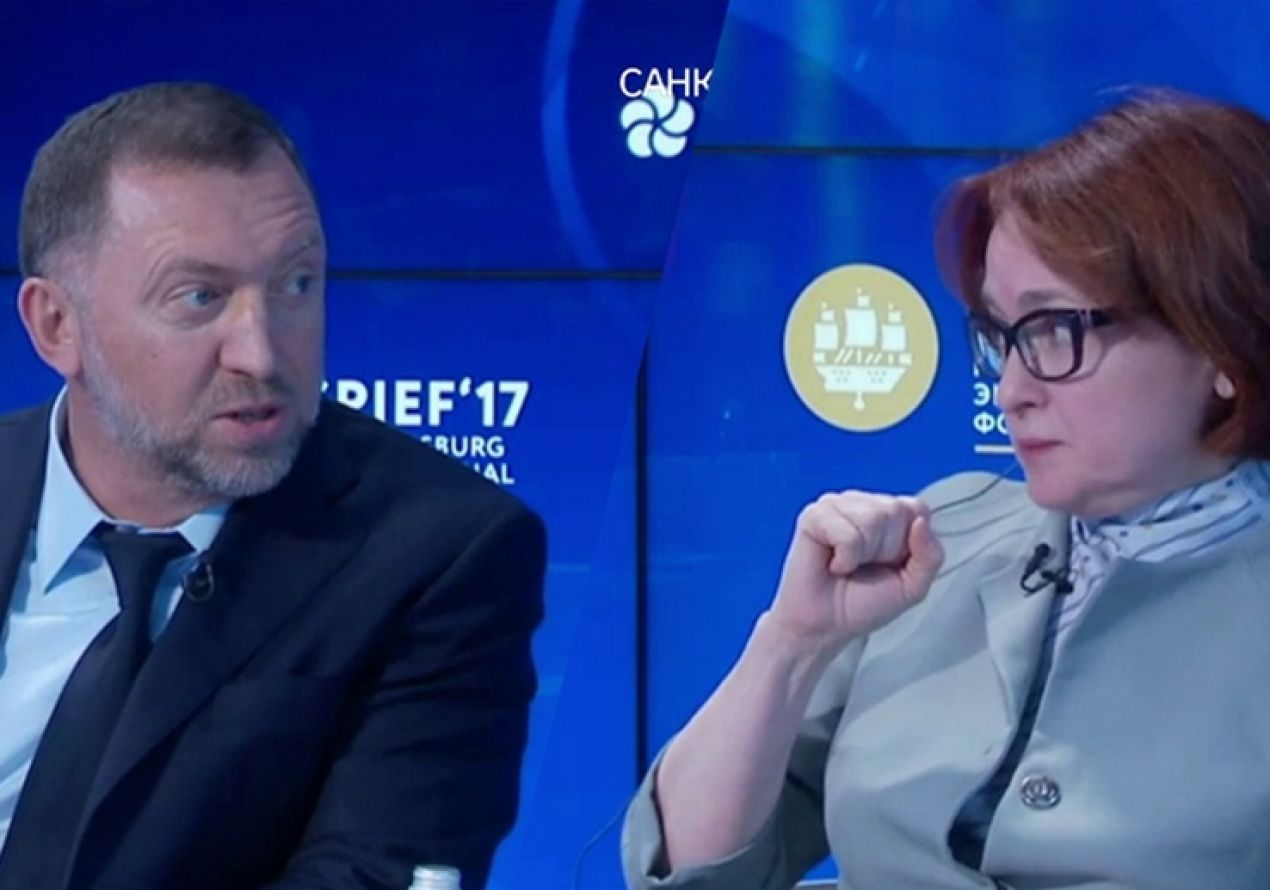 Nabiullina will not allow Deripaska to get shares in Otkritie?

Therefore, the media reports that the main lobbyist for the sale of Otkritie shares directly, and not through an IPO, is Gazprombank. The bank could consider that an alliance with such a large player as Deripaska would give them a field for maneuver in relations with the Central Bank. However, Nabiullina's position, which is called a fairly offensive lady for her eyes, can destroy this structure.