When Pavel Te is in the project, something wrong will be built...

Pavel Te, Chairman of the Board of Directors of Capital Group Holding, entered another Moscow development project, but apparently decided to "hide" his name in the wilds of the founders' structure? As partners, the scandalous developer could take the owner of the FGC Group of Companies Vladimir Voronin and the head of VTB Andrei Kostin, who is on the verge of bankruptcy.

The construction group of companies FGC acquired a large plot of 5.1 hectares in Govorov in new Moscow. It is not yet known for which specific development project the land will be used, but the fact that construction is planned was confirmed by the acquiring company itself.

The previous owner was going to build a premium apart-hotel. Its construction was to be carried out by the Fibonacci Group company, which belonged to Sergei Mosolov through SZ Georesurs LLC until 2021. Interestingly, since July 12, the latter has been owned by Contact-Progress, an affiliate of FGC. That is, in fact, the owner could not change. The Moscow Post correspondent understood the story.

The main FGC owner is businessman Vladimir Voronin, the son of a former official of the Moscow construction complex Alexander Voronin. His father held high positions back in Soviet times in the executive committee of the Moscow City Council, and his son today is a fairly large construction businessman. He is personally registered as a founder in 40 organizations. Moreover, his interests are not limited to the construction sector. There are among his firms and medical institutions, including those receiving government contracts. 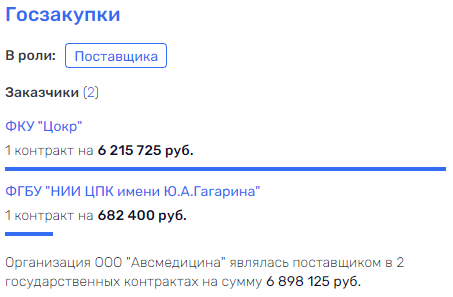 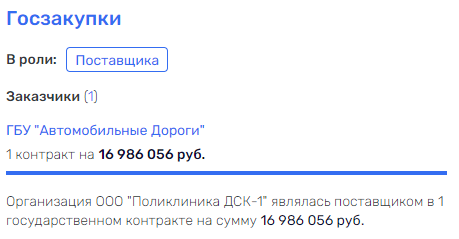 In partnership with VTB

Some companies are registered for the alleged sister or wife of the entrepreneur Irina Voronin. Among them, including offices with government orders and firms with shares under bank encumbrance. VTB stands out among the lending banks (shares in LLC Specialized Developer Kinodevelopment by Voronina and FSKZ, affiliated with Voronin, pledged to the bank), which is not the first time it has shone next to the FSK construction projects.

At the beginning of the year, the bank's official website hosted information that VTB would give FGC a loan of 44.2 billion for 4.5 years - for the construction of a Sky Garden business-class residential complex in the Moscow district of Pokrovskoye-Streshnevo. It was similar to the information that FGC, together with VTB, developed a mortgage program. Theoretically, VTB, led by Andrei Kostin, may have some young ladies from the activities of the corporation and help in its development. 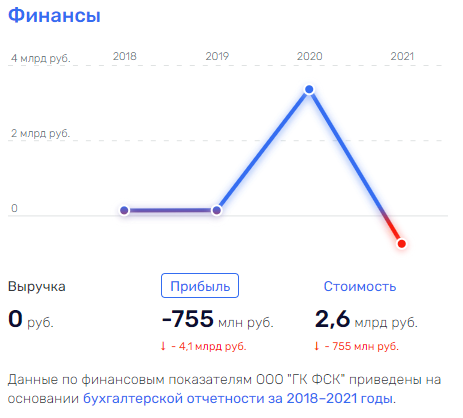 In 2018, the Vek edition, based on various factors, wrote that FGC Leader (part of FGC Group of Companies) faces bankruptcy. FSK itself is now also going through hard times. Why would VTB sponsor it? Photo: https://www.rusprofile.ru 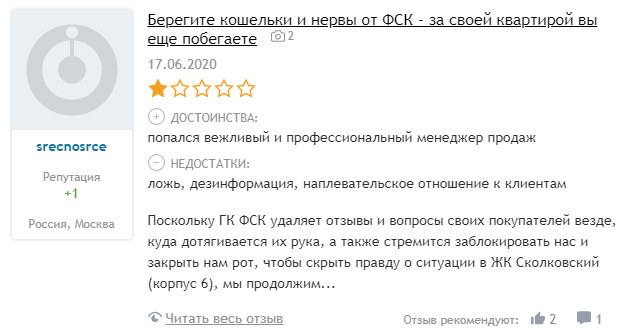 Feedback about an object built by the company from the FSK Group of Companies structure. Photo: https://otzovik.com/reviews/zastroyschik_lider_russia_moscow/

Does Cho play hide and seek?

Sergey Mosolov is a former partner of the owner of the scandalous capital developer Capital Group Pavel Te. Mosolov owns the specialized developer Polynesso, in which he bought out his stake in 2019 from Holding Development LLC, owned by Cho. By the way, from 2020 to 2022, Mosolov's share in Polynesso was pledged by the scandalous Sovcombank.

Shares in Kontakt-Progress, to which Mosolov's Georesurs company was re-registered, belong to two businessmen - Prokofiev Viktor (by the way, she is also under the burden - from Voronin) and Alexei Agafonov. Moreover, the latter owns a majority stake of 99.9% of the company's shares. That is, in fact, now "Georesurs" is controlled by him, he is also the general director of the company.

Nothing is particularly known about Agafonov himself on the market, since he is the head of only two organizations and the founder of one of them. And a natural question arises, how did he find himself in the project, in which a large developer Pavel Te could have been interested through Mosolov and Mr. Voronin - also not a small person? The latter does not hide his name in the industry, and it is hardly reasonable to believe that Agafonov is his protege. As for Cho, the story is more interesting here.

There are many scandals and rumors around the construction businessman. It is known that he was well acquainted with the former mayor of the capital, Yuri Luzhkov. He is credited with a warm relationship with the current mayor of Moscow, Sergei Sobyanin, thanks to which he, allegedly, is still so successful. No matter how many claims from regulatory authorities and ordinary residents of new buildings against Capital Group, it remains one of the largest developers in Moscow. In addition, the network is full of rumors that the businessman was associated with the crime boss Santa Hassan. In general, the biography of the head of the largest construction company is rich. 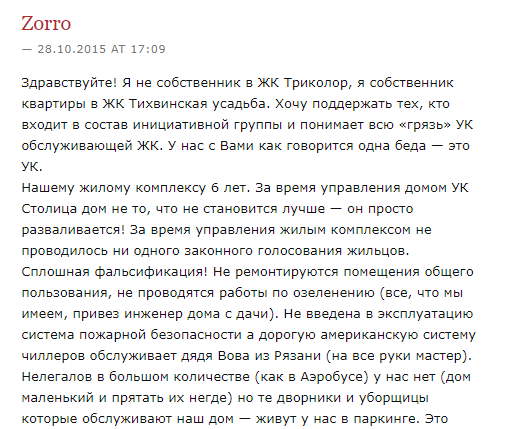 Review of the Tikhvin Manor residential complex from Capital Group. The tenant writes that the house literally falls apart and complains about the lack of observation of the house and falsification of the votes of the Criminal Code. Photo: https://anticapitalgroup.wordpress.com

It is likely that such information does not greatly please Cho's potential partners and therefore he enters into construction projects, as they say, undercover. About cases that are very similar to this, our publication has already written.

The tree of connections led to Cho

If you drive Agafonov's full name into the Rusprofail search bar, you can find his full namesake, who owns, together with Averyanov Alexei Anatolyevich, the educational institution Russian School of Maria Averyanova. Back in 2011, the Supreme Court of the Russian Federation considered a case in which the full namesake of the latter was convicted of robbery.

What is more interesting is the fact that Averyanov, through the St. Basil the Great Foundation, is associated with the rather famous Boyko-Great Basil. This personality appears in the article Versions as a land buyer in the Moscow region. By the way, at one time he was in jail on suspicion of creating an OPS - as RBC wrote about.

In the same material of Versiya, the name of Alexander Svetakov appears, which had similar interests and was associated with a successful acquaintance with Pavel Triandafildi, a member of the board of directors of Absolut Bank.

It is known that Absolut, during the time of Moscow Mayor Yuri Luzhkov, provided funds for development projects, just the Capital Group. Could Boyko-Veliky meet Pavel Te through Mr. Svetakov? And he may have already led his henchmen Averyanov and Agafonov to the construction businessman. And the latter is now just able to oversee the development project planned in the new Moscow, covering Mr. Cho.

And behind him, including with his almost "bloodless" GC "FSK" Voronin and VTB, which so generously finances FSK. And now the main question is what and from what will such a "friendly team" build?