Well, a very enriching plant: who entered the battle for the Kimkano-Sutar GOK and its state money

The lobbying of the topic "Kimkano-Sutar Mining and Processing Plant," in the hope of state subsidies, can be carefully and most importantly, interestingly, watched by billionaire Gennady Timchenko, plenipotentiary of the President of the Russian Federation in the Constitutional Court Alexander Konovalov and head of the Central Bank Elvira Nabiullina.

Deputy Prime Minister Yuri Borisov held a meeting with the participation of the Governor of the Jewish Autonomous Region (JAO) Rostislav Goldstein and the management of Kimkano-Sutar Mining and Processing Plant LLC - information about this was published on the official website of the Government of the Russian Federation.

One of the main issues was the further development of the enterprise and overcoming existing infrastructure restrictions. In particular, the issue of operating the recently opened and already scandalous long-term construction - the bridge over the Amur - was raised. As The Moscow Post reported, the funds allocated for its construction could have settled in the pockets of officials for many years - including, allegedly, the head of the VEB.RF Igor Shuvalov and the curator of the project Kirill Dmitriev.

If Deputy Prime Minister Borisov touched upon the topic personally, it means, most likely, the company is waiting for powerful state support. Only will it go where it is necessary or settle in the pockets of the beneficiaries of the enterprise? The Moscow Post correspondent in the Jewish Autonomous Region understood this confusing story.

For a long time, Kimkano-Sutarsky GOK belonged to Petropavlovsk through a subsidiary of IRC, then Petropavlovsk itself was sold by the investment company Stocken, registered in Liechtenstein.

The condition of the transaction was the release of Petropavlovsk from obligations to guarantee IRC credit lines in Gazprombank in the amount of $234 million. As The Moscow Post wrote, this money could be put into tokens in favor of the top management of Gazprombank and Petropavlovsk.

As a result, the company again hit the stock exchange - it was sold by Stocken a week after the purchase, and sold it to Gazprombank and businessman-co-founder of the Sputnik investment group Dmitry Bakatin at a price three times more expensive than she purchased. Kommersant reported.

The largest shareholder of Petropavlovsk - Yuzhuralzoloto Konstantin Strukov, even in the first iteration of transactions with the company, opposed the sale of IRC shares. The company stated that the estimated price of the deal with Stocken of $10 million was significantly lower than the exchange value of 29.9% of IRC shares on the Hong Kong Stock Exchange.

Moreover, the exemption of Petropavlovsk from guarantees to Gazprombank, from the applicant's point of view, could not be considered as a fair counter-provision, since the guarantee was issued in the amount of $200 million, and the net debt of IRC was much lower - $60 million. Yuzhuralzoloto also pointed to the affiliation of Stocken Board with one of the shareholders of Petropavlovsk - Everest Alliance Limited - Kommersant reported. But it was not possible to stop the deal.

By the way, as The Moscow Post reported, Sergey Sudarikov's Region Group showed interest in Petropavlovsk, behind which, presumably, the head of Rosneft Igor Sechin could stand.

In the end, shares that passed through several hands were acquired by the Cypriot offshore Axiomi Consolidations, the beneficiary of which in official documents on the disclosure of information about the transaction is called Nikolai Levitsky - writes Wek. Levitsky is a former vice-governor under the head of the Komi Republic, Vladimir Torlopov.

Vyacheslav Gaiser, who replaced Torlopov in 2015, was arrested and then sentenced on corruption charges to 11 years in a maximum security colony and a fine of 160 million rubles. Torlopov was also arrested - the court sentenced him to 6.5 years of general regime and a fine of 500 thousand rubles. It is said that Levitsky played an important role in the affairs of his former chefs and even allegedly supplied Geiser with funds for lawyers "for silence" about how Levitsky is connected with all these stories.

Levitsky himself at one time controlled CJSC Deca and Geotek Holding - both companies went into gigantic debts, but Levitsky still managed not to somehow become a defendant in criminal cases. Although, as it turned out, in the process of Decky's bankruptcy, part of the funds from transactions from the Cypriot offshore account were withdrawn to his personal accounts - wrote Wek.

Rumor has it that Levitsky is covered by the owner of the private investment group Volga Group and billionaire Gennady Timchenko, his former partner in Geotek Holding. Timchenko and Levitsky, as The Moscow Post wrote, may be the beneficiaries of the withdrawal of money from City Invest Bank. Moreover, there is a possibility that here Levitsky killed two rabbits at once - with a plus to the specified one he saved up the bank's debt so as not to pay off the borrowing bank - we also covered this story in detail earlier.

A few days ago it became known that another asset was rewritten to Levitsky - namely the Tulom Marine Terminal in the Kola district of the Murmansk region. I wonder if the fate of Deki and Geotech Holding awaits him too?

The light did not converge on Timchenko with a wedge

As you know, Levitsky "holds" the assets of other entrepreneurs who have come under sanctions - for example, Andrei Melnichenko's Donalink. The share of the offshore company KAPUSIUS SERVICES LIMITED, to which it was registered, was pledged to Gazprombank, but in March of this year it changed its owner - now it is Mick Invest, founded in January of this year, a certain Marina Kolesnikova. 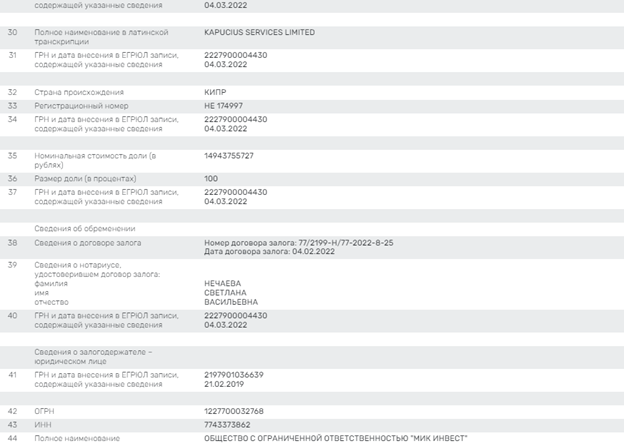 Remarkably, from one offshore company, the firm was re-registered to another with a similar name on the same date. There is a feeling that if Timchenko was the owner of the GOK to date, then he sold this company to someone.

Marina Kolesnikova is the head and founder of four firms engaged in the provision of accounting services and the activities of holding companies. The face, apparently, is nominal. Perhaps a lawyer. In the Consulting-SPB company, which is now being liquidated, its partner is a certain Nikolaeva Svetlana Gennadievna, who is also engaged in similar activities. 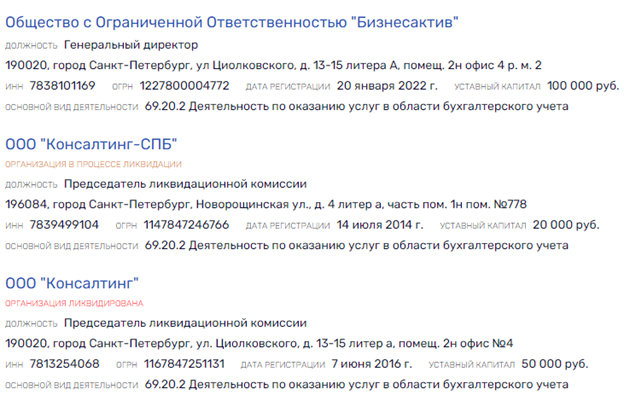 Taking into account what financial injections go to one of the firms associated with Nikolaeva - "Divier Architects," it is very similar to a person representing the interests of someone influential. 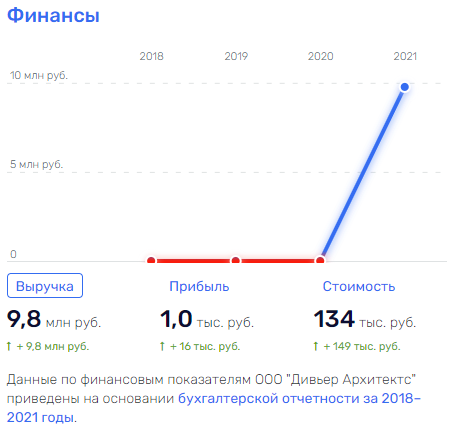 If you get acquainted with the holders of the offshore company "CAPUSIUS SERVICES LIMITED" - now the company is registered with several Cypriots and a Chinese citizen SHIU CHEONG JOHNNY YUEN. The latter, according to open sources, worked at the IRC itself. So, it can be a Strukov man who regains his assets in such a way that does not attract too much attention? And it is possible that Mr. Yuen is one of those who wanted to take the asset from Strukov.

A certain Sotiris Theodorou - he is also part of the company's directors - according to the search engine, is included in the list of persons under whose influence a certain banking institution in the Russian Federation is located. At least this information seems to have been published on the official website of the Central Bank of the Russian Federation, but now, apparently, it has already been deleted - when clicking on the link, error 404 appears, the archive link also does not work. Someone tried very well to hush up the tracks.

In total, in the net balance, several times resold-re-registered Petropavlovsk and re-registered GOK. All this may indicate either an attempt by Timchenko himself to hide his name behind a series of transactions, or that the whole story has another beneficiary... what is the bad assumption about the representative of the President of the Russian Federation in the Constitutional Court, Alexander Konovalov... or, God forbid, even about the Head of the Central Bank Nabiullina? However, these are only hypotheses. Is the truth nearby?