We will answer Suez with the North

Who needs the Northern Sea Route and who is most afraid of it?

The governors of St. Petersburg, Murmansk and Arkhangelsk regions, Sakhalin and Kamchatka proposed creating a plan for the development of the infrastructure of the Great Northern Sea Route - from St. Petersburg to Vladivostok - and providing him with state support measures. The current borders of the Northern Sea Route (NSR) - from the Kara Gate in the west to Cape Dezhnev in Chukotka - are defined in the Code of Merchant Navigation and are associated with the ice situation in these areas.

The importance of the Arctic in the socio-economic development of Russia is increasing. The Arctic zone provides 80% of natural gas production and 17% of oil, including condensate. Large investment projects in this region will provide demand for knowledge-intensive and high-tech products, create new jobs in many Russian industrial centers. The continental shelf of Russia in the Arctic contains estimated more than 85 trillion cubic meters of natural gas, more than 17 billion tons of oil and is a strategic reserve for the development of the country's mineral resource base.

According to the 1982 UN Convention on the Law of the Sea, the states of the Arctic region have the sovereign right to develop subsoil within exclusive economic zones (up to 200 miles) and the continental shelf (up to 350 miles), although these areas may not be part of their state territories.

The container ship, which ran aground in the Suez Canal, aroused interest in the possibilities of the Northern Sea Route. The navigation time on this route increased to 9-10 months. Taking into account the capabilities of the icebreaker fleet, it can be opened all year round. To deliver the container from Yokohama to Rotterdam, the distance is reduced by 34%, between Shanghai and Rotterdam, savings in distance are 20%. The "traffic jam" in the Suez Canal affects the attitude towards NSR, as an alternative, but carriers value the regularity and tariffs of routes. Russia's competition with the Suez Canal will be long and difficult. In 2018, the Venta Maersk container ship, designed for 3.6 thousand standard containers, leaving the port of Busan, passed the NSR as an experiment and with the help of icebreakers.

In the meantime, we are not talking about containers and not about transit. The main shipper and "user" of NSR is Novatek, which exports liquefied natural gas (LNG). In 2020, the volume of cargo transported by NSR amounted to almost 33 million tons, including over 18 million tons of LNG. The needs of Arctic SPG-2 will double these volumes. The second project that affects loading is Vostokoil. Rosneft will provide 30 million tons of oil for the NSR. Eurochem will supply iron ore concentrate to China via NSR. Rusatom Kargo plans container transportation of up to 10 million tons of cargo annually by 2024. One of the options for using the Northern Sea Route is the supply of fish from the Far East.

All major oil and gas markets are now in Asia. As the head of the Rosatom NSR directorate Vyacheslav Ruksha told Kommersant: "From Sabetta to Japan in the north compared to the route from Sabetta to Japan in the south through the Suez Canal, we can give up to 15 days of savings in one direction, on a circular flight - up to 30 days." By 2024, the volume of cargo transportation under the NSR should grow to 80 million tons, by 2030 - to 110 million tons. The capacity of the Trans-Siberian Railway and BAM by 2025 will amount to about 210 million tons.

According to forecasts of the Ministry for the Development of the Far East and the Arctic (Ministry of Eastern Development), "in the next ten years there will be at least 10 million tons of transit traffic." This will depend on the launch of an international container line on the NSR, the creation of an international transport operator, including transit ones. NSR may require ice-class container ships powered by nuclear fuel and LNG. There are no such vessels in Russia yet. But there is an obvious focus of state transport policy, strategies for the development of the Arctic and the Northern Sea Route in order to create a competitive niche for Russian NSR operators.

This is confirmed by the document "On the Fundamentals of the State Policy of the Russian Federation in the Arctic for the Period until 2035," which provides for the development of the Northern Sea Route as a competitive national transport communication on the world market.

"Strategy for the development of the Arctic zone of the Russian Federation and ensuring national security for the period up to 2035 year" provides for the establishment of year-round shipping in 2025-2030.

The "Plan for the Development of Infrastructure of the Northern Sea Route for the Period until 2035," approved in December 2019, involves the preparation of feasibility studies for the ports-hubs to Murmansk and Petropavlovsk-Kamchatsky to serve international traffic, including transit.

To maintain the Northern Sea Route in conditions suitable for navigation, new icebreakers are needed. The Baltic plant is building nuclear icebreakers. LK-60 The Arctic icebreaker of this series was transferred to Rosatom in October 2020. Icebreakers Siberia and Ural should be ready in 2021-2022. A contract was concluded for two more icebreakers, Chukotka and Yakutia. In the future, the construction of super-powerful icebreakers LK-120 the Leader series.

The task is to coordinate the commissioning of ultra-expensive equipment with the plans of shippers, which include Novatek, Norilsk Nickel, Rosneft, Vostokugol. Rosatom builds relations with them on the basis of long-term contracts.

Among foreign partners in the development of NSR are South Korean companies interested in port infrastructure construction projects. The Deu shipyard built 15 ice-class gas carriers, contracts were signed for another 6 such vessels for the Arctic LNG-2 project. They will be built by the Zvezda shipyard in collaboration with Samsung. For China, the NSR can become an "offshoot" of the "One Belt, One Road" program and will complement land corridors through the Trans-Siberian Railway and Central Asia to Europe. Chinese ports (Shanghai, Dalian, Qingdao) will provide cargo for the NSR, given China's ties with the European Union. Chinese companies CNPC and SINOPEC, Japanese Mitsui and JOGMEC, as shareholders of Arctic LNG-2, will also be importers of fuel. 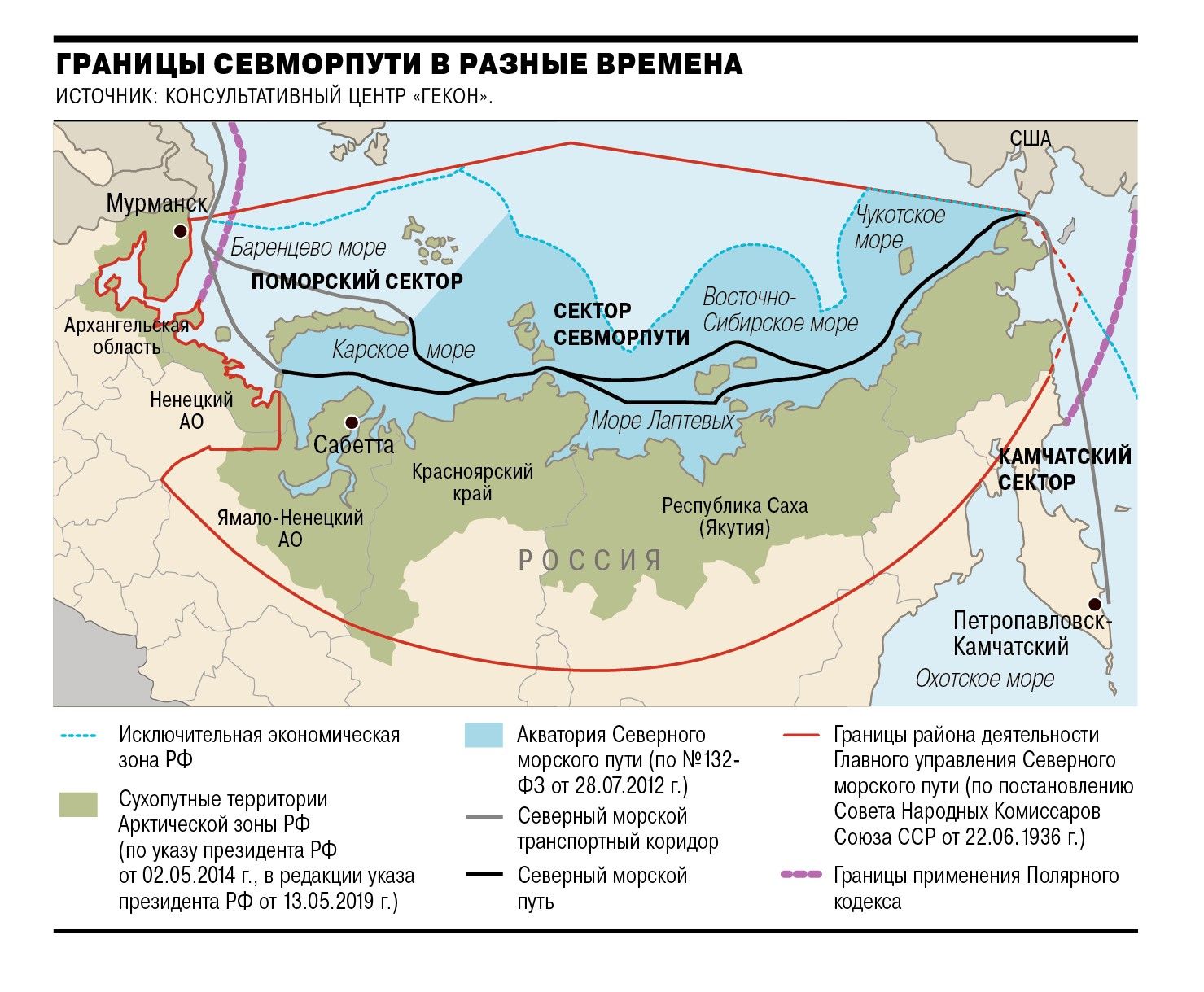 In the future, the Northern Sea Route can be supplemented by the Trans-Siberian Container Bridge (TSKM), the services of which are already used by shippers of China, Japan and South Korea. The railway network of Russia, including the Trans-Siberian Railway, is the longest fully electrified railway network in the world. Every day, up to 80 pairs of trains pass through the Trans-Siberian Railway alone. The delivery time of the container from Shanghai to Rotterdam with proper organization can be reduced to a third of the time taken by the Suez route. Taking into account the Russian Railways seven-day Transsib program and the plan to increase the transit of standard containers to 1.5-2 million per year, TSKM can replace the Ever Given container ship, requiring about two weeks of time to the delivery point. Everything will depend on logistics, the quality of services and tariffs.

The Northern Sea Route also ensures the security of the country. When three Russian nuclear missile-bearing submarines surfaced by breaking through the ice, this was supposed to help NATO "democracies" understand who is the main one in this part of the world's oceans. Since 2019, Russia has imposed a ban on the circulation of foreign warships along the Northern Sea Route. Passage of warships, including submarines, is possible after notification.

Denmark, Canada, Norway, Iceland, Sweden, Finland and even China claim the Arctic. For the United States, cooperation between Russia and China in the Arctic is a terrible dream. Washington is not tired of stating that routes north of the Russian Arctic coast should be "international," that the Northern Sea Route should be open for transit passage.

In this regard, the infrastructure of the permanent presence of the Russian armed forces in the Arctic guarantees the protection of economic interests, the security of borders and strategic forces. In the north of Russia, six military bases, military airfields, anti-aircraft missile system positions and military ports were deployed. The military camps Arctic Trilistnik and Northern Clover are an example of innovative arrangement and a symbol of the presence of Russian armed forces in the northern latitudes.