Businessman Vyacheslav Kantor who is highly credited, plans to build the plant under the state guarantee. However, all the money will flow abroad, and Russia will be left with another poisonous production, won’t it?

According to the correspondent of The Moscow Post, Vyacheslav Kantor's Acron wants to invest $1.5 billion in the nitrogen complex in Veliky Novgorod. But on one condition – if the authorities approve an agreement on the protection and promotion of capital investments for him. The complex should become the largest producer of ammonia and carbamide in Europe. At the same time, Acron is now urgently withdrawing from foreign projects, reducing its investment program and gaining loans in full. It seems that these are not the best times for such grandiose projects? But, it seems, that almost nothing can stop Kantor in his desire for money. And the money, in its turn, are drawn, as it should be, abroad.

Acron plans to build a complex with a capacity of more than 1 million tons at its main production site in Novgorod. The company has already submitted an application for the conclusion of a draft agreement on the protection and promotion of capital investments. As soon as the agreement is signed, the project will begin.

In addition, Acron submitted similar applications for the second stage of the Oleniy Ruchey MPP and the construction of a MPP at the Talitsky site in the Perm region at a cost of more than $1.5 billion. The company's plans are ambitious, if not Napoleonic. But what means will it use to implement them? Obviously, the calculation is based on budget "handouts".

Acron is going through some tough times. At the end of last year, the company reduced the investment program from 500 to 415 million dollars, and this summer decided to postpone the start of construction of a potash mine. Oleniy Ruchey appeared to be unprofitable. In addition, the company recently got into a scandal related to the payment of dividends - it was accused of abusing tax benefits.

As RBC wrote, the Supervisory authority considered firms in Cyprus and Luxembourg created solely for unjustified tax benefits - through them, funds eventually ended up in the British Virgin Islands. Instead of a tax of 15%, a rate of only 5% was applied. The final beneficiary was Kantor himself, so the companies eventually recalculated the rate - now Acron needs to pay an additional 1.7 billion rubles to the Treasury. Does it mean that the businessman withdraws funds overseas and does not even hide it? He also tries to "cut off" a bigger piece of the pie by underpaying taxes! It is curious where the law enforcement officers are looking at?

Meanwhile, many of Kantor's assets have unhealthy financial indicators and are unprofitable. Negative profit often indirectly indicates that money is being withdrawn from the company. It is possible that Kantor continues his "brave work" to this day.

And here's what's even more great. It seems that the money of ordinary taxpayers - that is, our own money-can settle abroad on the Kantor's accounts. After all, the company now, in fact, survives at the expense of credit funds, including from state banks. So, last year we agreed to Finance Talitsky MPP for as much as $1.8 billion from VEB.RF.

In 2019, a syndicate of Russian and foreign banks extended Acron's $750 million loan granted in May 2017 to seven years. Initially, the loan was granted for five years. Sberbank, Rosbank, and UniCredit Bank are among the syndicate's Russian participants. Yes, Kantor is just a favorite of credit institutions!

According to the financial statements published on the official website of Acron, the company's debt increased by 2% over the past year and now amounts to 86 billion rubles. It is curious what will the businessman pay with? So far, it seems that he is only accumulating debts… 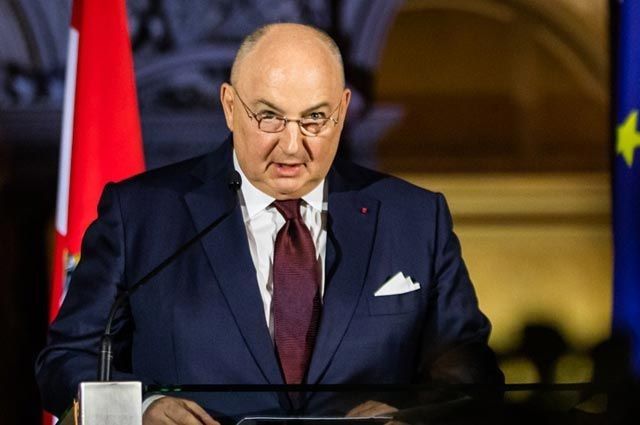 Is Kantor deep in debt?

Therefore, it is necessary to attract external capital. For example, according to Interfax, VTB group recently acquired a 10% stake in Verkhnekamskaya potash company, which is the operator of the Talitsky MPP. Earlier, Sberbank, VEB.RF, the Eurasian Development Bank and Raiffeisenbank also participated in the project. In fact, credit organizations simply lend to  Kantor on very favorable terms - later they transfer their shares back to the businessman. At the same time,, as they say, it is utter chaos around in the VPC - the launch of projects is postponed again and again, although the license was obtained 12 years ago. Apparently, Kantor has more important things to do - for example, distribute cash flows to his foreign "wallets"?

At the same time, Acron began to withdraw from foreign projects. For example, the company sold a license for mining at one of the sites of potash deposits in the canadian province of Saskatchewan. Kantor realized that will not work "laundering" in the foreign market so successfully ? In any case, the funds are likely to end up in foreign accounts.

With love, from Russia – abroad

In fact, all of Acron's structures are tied to offshore companies. The main Kantor’s assets are PJSC Acron and JSC Dorogobuzh. The first one is 62% owned by Redbrick Investments S. a.r.l. of Luxembourg. 23% of Dorogobuzh is controlled by Akronagroservice, which is associated with the American firm Ryton limited, and now almost completely belongs to the Cyprus Pin Holdings Limited. The latter organization is called the "wallet" of Kantor, through which allegedly 5 billion rubles can be pumped annually.

Ryton Limited was rumoured to be needed to transfer funds to American officials. But even bribery did not help Kantor overseas - in 2018, he was on the US sanctions list after the so-called Kremlin report, wrote Vashi Novosti. Presumably this is why he is now withdrawing from foreign projects.

Although he still managed to fight for a place in the sun. It is said that he tried to influence the Americans through the European Jewish Congress, a public organization headed by him. According to Life, he hired lobbyists from the company named Global Policy Initiatives, who assured that the inclusion of Kantor in the sanctions list will lead to risks for the fight against anti-Semitism in Europe.

What is known is that Kantor seems to treat Russia without much trepidation. The SZFK company, controlled by him, is presumably a systematic source of pollution of the Umbozero in the Murmansk region. This was reported by Novaya Gazeta. Aluminum and molybdenum got into the reservoir, which caused the water to turn green. In addition, chlorine was found in nearby streams. Presumably, the elements got into the water during the melting of snow. It is noteworthy that after the discovery of contamination, the Governor of the Murmansk region, Andrey Chibis, explained this incident by a mudslide, which had not occured in those regions for more than 40 years.

And, despite such a rich track record, it seems that no one is going to restrict Kantor's activities. On the contrary, they are favoured in every possible way: they probably protect themselves during environmental problems, "stuff" them with loans and turn a blind eye to scandals with tax evasion. The logic of such a free behavior of Mr. Kantor is partly understandable: probably, he is not going to live in these parts. According to rumours, the businessman has two foreign citizenship – in the UK and Israel. But why people in Russia have to suffer from his dubious activities?