Vekselberg not get away with it from Baikal?

The "threads" of the environmental scandal surrounding the extraction and sale of water from Lake Baikal may lead to oligarch Viktor Vekselberg. The latter, being under sanctions, could "stuff" the most delicious assets into the "pockets" of his former employees.

As the correspondent of The Moscow Post reports, the manufacturer of drinking water Baikalsea Company got into a major environmental scandal. The structure was sued by the BaikalEkoDeystviye Foundation, created with the support of State Duma Deputy Nikolay Buduev. The plaintiff demands to recognize illegal the station through which the company extracts water from the lake - by the way, international property.

The fund believes that the activity of the Baikalsea Company in a specially protected area is illegal. According to the director of BaikalEkoDeystviye, the fund was able to detect the absence of a construction permit from the company, as well as the imposition of a protection zone from the object on almost the entire water area of the lake.

Baikalsea Company is owned by Baikal Holding LLC, 53.28% of which is owned by Ream Management LLC of Mikhail Sivoldaev, the former deputy chairman of the board of Renova, a scandalous oligarch Vikror Vekselberg. The rest is owned by JSC Baikalskaya Glubinnaya of Maxim Surnin, who also worked in the structures of Renova.

It is rumoured that both of them are direct representatives of Viktor Vekselberg, who allegedly does not want to be noticed against the background of a lot of problems, and prefers to act with the hands of his former subordinates. According to Infpol, in the past, Vekselberg owned 47% of the shares of Baikalsea, which he entered in 2014. But it seems that Western sanctions have prevented the company from quietly earning money, having such a shareholder. Therefore, Vekselberg can no longer be found among the shareholders.

As follows from the material of the Znak publication, Viktor Vekselberg can generally be a big fan of placing people from his environment on posts in various "delicious" companies associated with him. For example, the already mentioned Mikhail Sivoldaev became a shareholder of Ream Management while still being the deputy chairman of the Board of Renova, and not at all after his departure from the structure.

The shareholder was also Vekselberg's business partner Yevgeny Olkhovik, as well as the former director of T-Plus Boris Vainzikher, who were held in a criminal case on bribery. Their case was connected with the criminal case of the former head of the Komi Republic Vyacheslav Geyser. This was also written by Znak.

Apparently, by such "distribution" of assets, Vekselberg shares risks with his top management, or even acts with their hands. Taking into account the environmental scandal with the Baikal Company, this is not at all superfluous. However, the scandal broke out even earlier, and initially was not related to the environment.

Vekselberg's people: Is Baikal "leaking" to the Bahamas?

The fact is that LLC Baikal Holding of Sivoldayev and JSC Baikalskaya Glubinnaya of Surnin are named by Kommersant as the ultimate beneficiaries of the structure. At the same time, the Baikalsea Company is formally owned by ESW INVESTMENT LTD, an offshore company from the Bahamas. That is, the water from Lake Baikal is bottled by a company that is tied to a structure that formally has nothing to do with Russia.

At the same time, the Baikal Company is not confused by the fact that in its authorized capital in such cases-only 10 thousand rubles. Back in January 2020, MP Nikolay Buduev told his supporters that a certain private company tied to the offshore company we mentioned had registered exclusive rights to use the name Baikal. 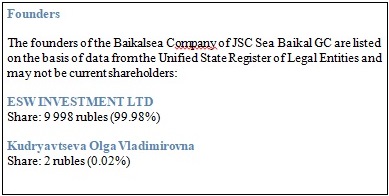 The MP was outraged, as were his supporters. The Regnum newspaper wrote about the situation. That is, what is the picture: the money from the sale of Baikal water can go directly to an offshore company in the Virgin Islands. The same company received exclusive rights to the name Baikal, and now it can threaten the ecology of the lake - the world heritage of nature? Isn't it much for Viktor Feliksovich's former colleagues?

And these are not the only projects in which these individuals can represent the interests of Vekselberg, while he himself is sitting in the shadows. The same Sivoldaev is generally a very well-known businessman "on the waves" of Renova. In October 2020, it became known that he was interested in agribusiness.

The same Ream Management company could become a co-owner of three greenhouse complexes that were once part of the perimeter of Renova itself, and later came under the management of the Dolina Ovoshchey GC. The deal didn't work out in the end. But it is clear that Sivoldaev is interested in companies that were related to Renova.

Another example is the sale of Rusnano structures to the Hevel energy company. Almost half of the shares went to Ream Management of Sivoldaev. The other part to Renova of Viktor Vekselberg. The transaction took place in 2018. At the same time, Hevel still owes Rusnano 10 billion rubles. Apparently, no one is in a hurry to return this money.

Even more interesting is the fact that, Ream Management had to take out a bank loan to close the deal. This was stated in an interview with Kommersant by the head of Hevel GC, Igor Shakhray. And why, if not for the possible withdrawal of bank funds, was the whole event started?

Is it because of the hands of Sivolgaev that Mr. Vekselberg himself and some of the structures associated with him have long been under Western sanctions? That is, if someone had the intention to withdraw money abroad from the energy sector (for example even from Baikalsea) wouldn't it have worked through Vekselberg's companies?

Of course, for such a cover, the same Sivoldaev and Surnin should have their own deal. Let's start with Sivoldaev and his Ream Management. The feeling is that money and assets can simply be withdrawn from the company. How else to explain the loss for 2020 in the amount of 619 million rubles? Revenue - barely half a million, and the value of assets - minus 1 billion rubles. 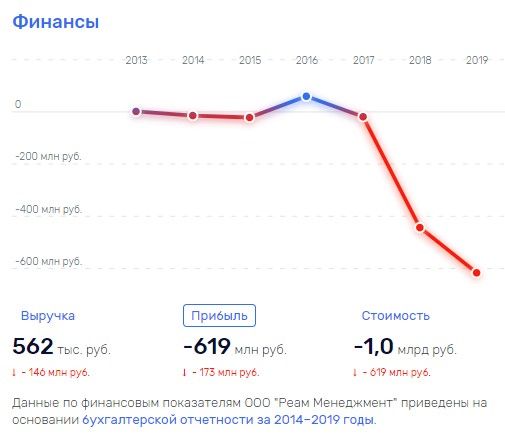 Where did Ream get the money to buy assets?

Question - and then how does Ream Management buy offices? With what money? Or, rather, who gives the money for this case, is it not Viktor Feklisovich?

But Ream is in plain sight. And Sivoldaev is a much more interesting character. He is the founder of a number of companies. His close relatives, too. And a number of these companies have signs of fictitiousness. So much so that it is not clear how they work.

For example, he was the founder of Green City LLC, which is now owned by Elena and Ilya Sivoldaev. Apparently, his wife and his son. It is not clear how the company exists, because the latest financial statistics are indicated only as of the end of 2015. The company then ended the year with zero profit and zero asset value. Very strange for a company with an authorized capital of 2 million rubles.

Elena Sivoldaeva also has her own "toy" ( in the past, she acted as the founder of 5 organizations at once). Among them there is Magic workshop of Elena Sivoldaeva LLC, which is engaged in the production of outerwear in Sochi. The company has never made a profit since 2014, and is currently in the process of liquidation.

Why, it can be "experimented" and "burnt out" if the spouse "plays tricks" with Vekselberg himself, disposing of the fate of multimillion assets? They won't be left without a penny.

The same can be said about the second partner in Baikalsea, Maxim Surnin, who previously also worked in the structure of Renova. Both, we recall, formally operate through Baikal Holding LLC (53% owned by Ream Sivoldaev, 46% owned by Baikalskaya Glubinnaya of Surnin). But Baikal Holding is generally similar to some kind of intermediary. But rather strange intermediary... At the end of 2019 - no revenue, no asset value, only a loss of 644 thousand rubles. With zero staff, and an authorized capital of ... 880 million rubles.

The same oddities with Surnin's Baikalskaya Glubinnaya. It looks even more like a fake here. One employee with only 10 thousand authorized capital. At the end of 2019 - no revenue, no asset value. Loss of 483 thousand rubles. And at whose expense, then, is the "banquet" with the acquisition of "Baykalsi"? Is it not at the expense of Viktor Feliksovich, so that then half of the lake is blocked with a fence and the Baikal waters are "drained" in the form of profits on offshore shores?

Forbes openly writes that Maxim Surnin has managed to earn hundreds of millions of rubles on the Baikal water for many years. This means the Baikalsea company, almost half of which, as we wrote at the beginning, belonged to Viktor Vekselberg.

Meanwhile, Surnin himself is a scandalous person, and the situation with Baikalsea is unlikely to benefit him. Even before Surnin plunged into the water business, he was a deputy of the Legislative Council of the Irkutsk region. In 2008, he got into a scandal. According to the authors of the Babr24 website, allegedly even then he, being in the status of a deputy, could look at the golden hectare of land, which was at that time owned by JSC Irkutsk Relay Plant.

Most likely, this plant would have a sad fate, if not for the attention of the general public. In the end, if Surnin wanted to do something with the hectare, it didn't work out. It is also necessary to do the same with Baikal -not to lose the unique lake and use it for commercial interests. This can only be done by combining the efforts of the media, society and the authorities.

18 February, 8:09
Who is "treated" by Vekselberg, or Whose interests will be observed in the "Rosatom" Komarova

08 February, 7:54
Soft stelets, hard to sleep: does the automobile history of the Federal State Unitary Enterprise of the Ministry of Energy "smell" Shulginov and Vekselberg?