What could be in common between former Gazprom manager Ali Uzdenov and Magomed Kaitov, convicted of fraud?

After Ali Uzdenov began to lose control of the Mishkino confectionery factory, a gap could appear in his "assets." It is possible that an urgent replenishment of funds was required to correct it.

In this sense, it may sound plausible that the full namesake of Uzdenov's son married the daughter of the authoritative businessman Magomed Kaitov. Such a statement was distributed by the popular local Rostov Telegram channel Rostov Com.

Recall that Mr. Kaitov is the ex-head of IDGC "North Caucasus," who was recognized as a fraud.

The credibility of the story was understood by the correspondent of The Moscow Post in the Rostov Region.

Note that both Uzdenov and Kaitov in the past should have had many overlapping interests. Both launched rapid activities in the South of Russia. And if Ali Uzdenov appeared more often in Rostov, where, as it is believed, Governor Vasily Golubev patronizes him, then Kaitov was tightly engaged in IDGC affairs in Pyatigorsk.

Kaitov was sentenced in April 2020, the investigation took seven years. He was found guilty of embezzlement of 340.1 million rubles by writing off part of the funds paid by consumers for electricity to controlled structures. About this writes Kommersant.

The scheme worked around Yurenergokonsalt LLC, with which Kaitov concluded a number of agency contracts. The company was to collect payments for electricity and make calculations on behalf of the customer. In fact, it was a collection company, to the help of which Kaitov resorted allegedly because consumers refused to pay for the current. Many considered tariffs unreasonably high.

But law enforcement officers considered that Kaitov and accomplices only covered up for social problems of the population. The funds received at the settlement accounts of LLC on behalf of Kaitov did not fully go to pay for electricity. Part of the money went to the accounts of third companies, the purchase of accounts, commercial structures, securities.

Trustees of Kaitov and his family were invested in various projects, including those related to energy, construction and animal husbandry. The family acquired several former collective farms, and another. Mainly in the South of Russia. How can you not recall that in those years Ali Uzdenov himself actively worked in the field of first energy, and agriculture in nearby regions.

Recall that in 2007-2009 Uzdenov was the general director of Gazprom Rostovregiongaz, was responsible for the distribution of blue fuel throughout the Rostov region. Later, he became vice president of AFK Sistema, and then managing partner, taking over the leadership of Sistema's largest agricultural asset, the Steppe agricultural holding. As a result, now "Steppe" is included in the list of ten largest landowners of the Russian Federation.

On these planes, among other things, the interests of the Uzdenovs and Kaitovs could cross. At the same time, the latter resigned from IDGC in November 2011, that is, before his detention. He quit of his own free will, amid intense criticism from President Vladimir Putin and Rosneft head Igor Sechin. The president even called Kaitov "the head of the family that controls the entire energy system of the North Caucasus." 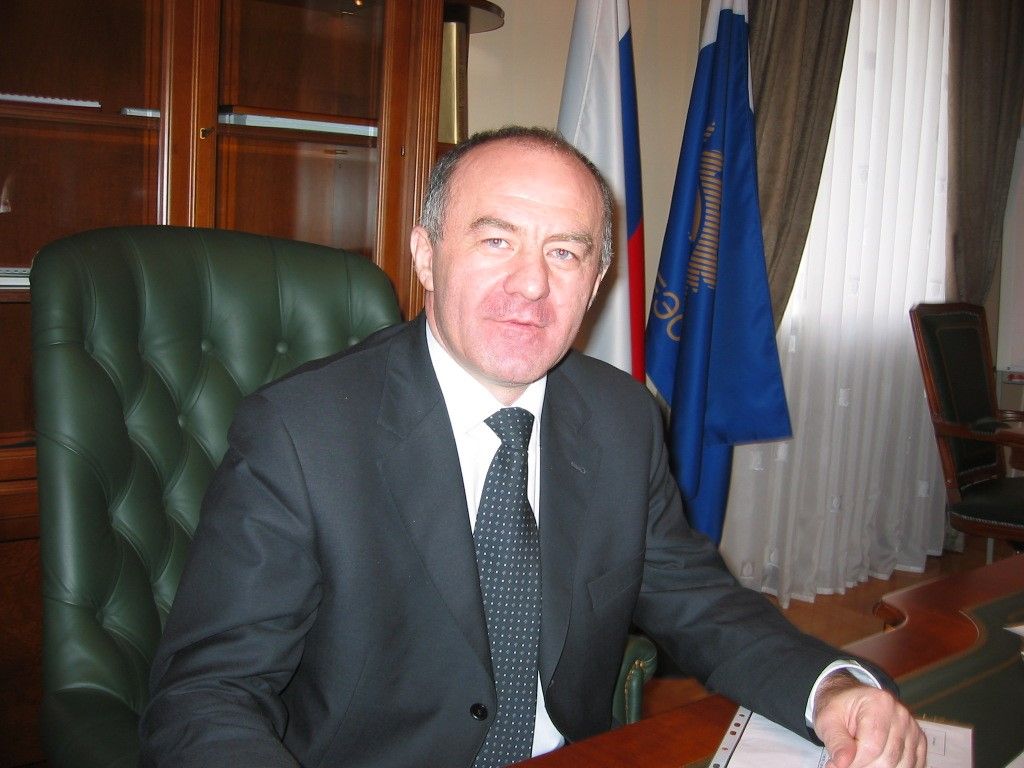 Magomed Kaitov managed to take a noble walk at IDGC, but the interests of his family are much wider?

As a result, already in April 2021, Andrei Ryumin, without inventing anything better, questioned the scheme for restructuring the debts of guaranteeing suppliers of the North Caucasus. It could fall apart soon. This is a crisis, the beginning of which can be sought in the leadership of Kaitov by the IDGC there.

But as the President correctly noted, we are not talking about Kaitov alone, but about an entire family with whom the namesake of Uzdenov's son was related. In addition, this family penetrated deep into power and near-power circles. For example, one of the young representatives of the Kaitovs, Ansar Kaitov, is the grandson of the former president of Karachay-Cherkessia Mustafa Batdyev.

By the way, Ansar Kaitov is credited with owning a posh house in Cherkessk. There are still extracts from various documents on the Internet. The Kaitovs are in no hurry to confirm their authenticity, or falsehood. Nevertheless, it follows from them that Kaitov became the owner of the mansion at the age of 18. According to evil languages, allegedly built it could be with the money of those very robbed payers on bills for IDGC North Caucasus.

Ansar is the son of Zaur Kaitov. Also a former official, he previously headed the Forestry Agency for the Karachay-Cherkess Republic. Magomed Kaitov is his uncle.

In the meantime, Magomed Kaitov is serving a term, it will not be superfluous to recall the terrible story that happened with the former deputy of Karachay-Cherkessia, Aliy Kaitov. It is believed that a close relative of Magomed. According to Kommersant, Ali Kaitov was sentenced to 17 years for organizing a massacre. "

Interestingly, for many years they tried to connect the Kaitov family with the Arashukov family, who were under investigation. Kaitov was called the energy king, and ex-senator Rail Arashukov was called the gas king. Today, Arashukov, among other acts, is accused of contract killings. Another person who has been trying to attribute work with the Arashukovs in recent years is Ali Uzdenov, who in the past headed the Rostov divisions of Gazprom. Is the circle closing?

Meanwhile, although Magomed Kaitov is in prison, there are still questions about how and through which structures he carried the stolen money. Many believe that the operations were carried out by Texbank from Cherkessk. It was even called the Kaitov family bank, although Magomed had 13.24% there, not the largest share.

The bank was deprived of its license in April 2021, claiming self-liquidation. This decision almost coincided with the verdict of Magomed Kaitov in time, which suggested that this was nothing more than noticing traces of possible operations with funds acquired illegally.

At the same time, the credit institution, according to Rossiyskaya Gazeta, has sufficient funds to pay creditors. What can explain to others the cessation of activity, if not the "leak of the roof"?

It is with such a family that the full namesake of Ali Uzdenov will be related. Meanwhile, he himself, as it was said, is surrounded by scandals. Especially in the Rostov region. Some even call him the owner of the region. Like, allegedly even the head of the Administration of Rostov-on-Don is not Golubev's man, but Ali Uzdenov's "pawn." The same opinion is heard about the influential deputy of the regional ZakSa Vladimir Revenko.

The latter is the head of PJSC Gazprom Gas Distribution Rostov-on-Don and Gazprom Mezhregiongaz Rostov-on-Don LLC. They say he moves on the new Tesla with security. It is not difficult to believe in the acquaintance of Revenko and Uzdenov - from 2012 to 2016, Uzdenov himself led both of the above-mentioned enterprises, and on this level he closely interacted with the regional authorities.

In the region, Uzdenov is considered a philanthropist, a respected person. Restores monuments, receives awards from Governor Golubev. Previously, he was a deputy of the Legislative Assembly of the region. And, according to rumors, is now actively engaged in business there - but not in plain sight, but allegedly through people close to themselves. Uzdenov has enough publicity in AFK Sistema. 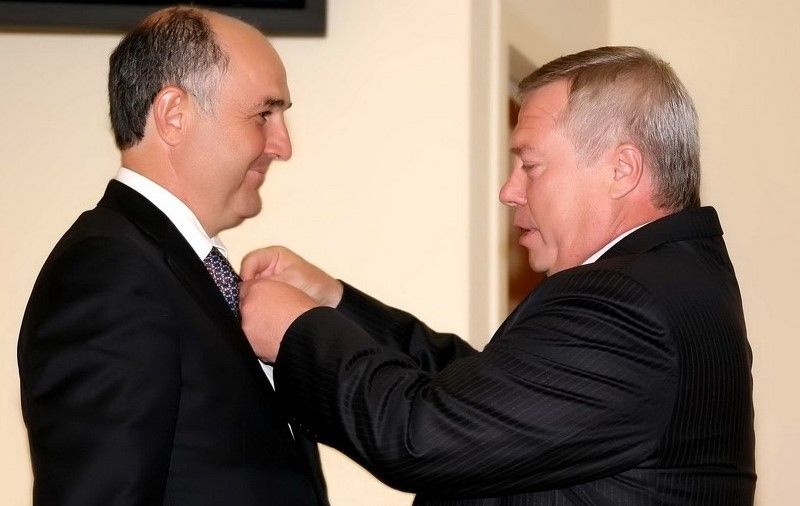 It seems that Governor Golubev is very favorable to Uzdenov

The Moscow Post has already reported that Uzdenov was involved in the case with the Mishkino confectionery factory. It all began with the fact that at the beginning of 2019, the Azov-Don Company demanded that Mishkino return 173 million rubles issued as a loan. It turned out that Ali Uzdenov was the guarantor of the loan.

In April 2019, he filed an application with the Arbitration Court for involvement as a third party. In it, he indicated that he did not know that at the time of the conclusion of the guarantee agreement, the factory had been operating at a loss for four years, and there was a huge debt on it. And even more, he considered that ADK and Mishkino are affiliated structures.

Who will believe that Uzdenov - one of the most visionary businessmen and managers of modern Russia, acted as a guarantor on a considerable loan, not getting acquainted with the finances of the enterprise? Of course, rumors have spread that bankruptcy is fictitious - with the aim of alienating the company's assets and leaving the market. Uzdenov was even credited with affiliating with Mishkino competitors, but in the end this was denied in court.

A number of scandals were associated with the company DRSU - South, which at one time belonged to Uzdenov's son - Yevgeny. Detractors call the latter those who allegedly looked after business assets in the same Aksai district. The company was engaged in the construction of a new cemetery in Rostov, and many complaints arose about its work. She won a competition for the construction of a cemetery. It was supposed that it would appear in 2018, but this did not happen.

At the same time, the company is not alien to state contracts, they have already gained 776 million rubles. At the end of 2019, the company has a loss of 262 million rubles. Did the money received from the budget not withdraw from it? It is known that Yevgeny Uzdenov sold his stake in the company at the beginning of 2019.

Evgenia Uzdenova is also associated with Stroymaster, which in 2019 received a contract for the construction of the Krivoshlykovsky-Sholokhova underpass without a competition. Before that, an electronic auction was declared invalid. Apparently, no one willing to master 107 million rubles, except for Stroymaster, was found. Or the reason that Uzdenov Jr. conducted business with the son of Governor Golubev himself Alexei?

They owned Listopadovsky Sources LLC, which is engaged in rental and real estate management. Since 2016, the company has brought its founders some losses. At the same time, in the same 2016, Yevgeny Uzdenov, in the wake of media publications, withdrew from the company's capital. After that, the rumors said that money could be banally withdrawn from it.

The Uzdenov and Kaitov families are very suitable for each other in the number of high-profile stories, flaws and corruption stories. Therefore, if there is one, the alliance will be very strong - because it must have a serious material basis.