While the President is fighting against illegal deforestation, sectarians are building houses for Alexander Uss' officials out of wood of unclear origin, and his Minister is under investigation for bribes in the timber industry.

As the correspondent of The Moscow Post reports, today Russian President Vladimir Putin held a meeting on the development and decriminalization of the forest complex. The Head of State demanded that officials strictly stop any attempts of illegal deforestation, which, according to him, continues to be carried out by barbaric methods.

At the same time, the Krasnoyarsk territory, which is headed by Governor Alexander Uss, a scandal with the detention of the Minister of Forestry of the region Dmitry Maslodudov continues to develop. Maslodudov is suspected in bribes, which were allegedly paid to him by representatives of the Kraslestorg company for protection in illegal deforestation.

According to rumours, this company may be directly connected with the religious community of the Church of the Last Testament - a destructive sect headed by Sergey Torop. The latter was called Vissarion and represented himself as "the last incarnation of Christ on Earth". But this is just the beginning.

The problem is that Kraslestorg, as Kommersant writes, belongs to people who are closely acquainted with the brother of the detained Minister Dmitry Maslodudov, Yuriy. Kraslestorg was engaged in timber harvesting in the Yenisei district of the region. According to investigators, the Head of the Ministry of Forestry gave instructions to the forest districts under his jurisdiction to select plots for sanitary and other cuttings, and then gave them to Krasletorg.

The house that Vissarion built

At the same time, officials of the Krasnoyarsk territory themselves could have a close friendship with sectarians from the Church of the Last Testament. Moreover, they built houses for the 2019 Universiade in the region, and not only for it. Allegedly, their services were used by many local officials and friends of the Head of the region. And it began even before Uss, when Alexander Khloponin was Head of the region.

Nowadays, the entire network is seething with details of Khloponin's alleged visit to Vissarion in 2008. If there was one, it was probably only a single visit out of many ones. Uss himself could also visit sectarians, including their construction sites. 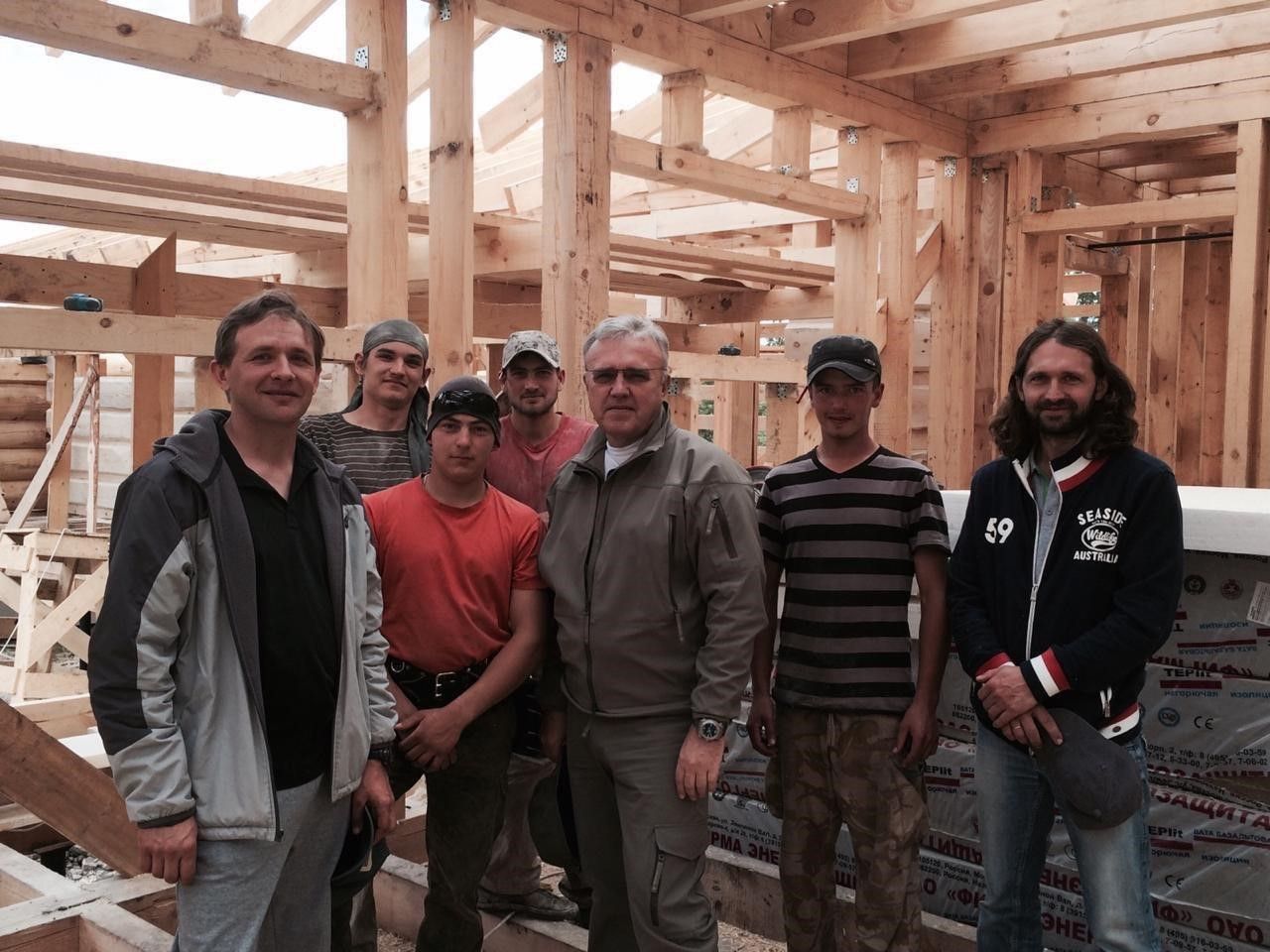 The people in the photo with Alexander Uss may be members of the CLT. And just against the background of the construction of a wooden structure. Did he get the wood legally?

As the journalists from Kommersant add, sectarians built houses for them from wood of unknown origin, and the main income of the religious community could be just allegedly illegal timber harvesting. The uproar was such that after all this, it seems to be time for Governor Uss to write a statement "on his own".

As, incidentally, did Dmitry Maslodudov three days before his arrest. The story is completely wild. In the Russian Far East, there was a sect that could be engaged in illegal deforestation for years or even decades under the patronage of local officials. For large bribes.

Maslodudov alone could possibly be given about 4 million rubles. At the same time, God knows what was going on in the sect, people could be zombified, persuaded to sell their apartments. And all this under the supervision of Alexander Uss and his predecessor Alexander Khloponin?

On the background of wild scandal, Uss did not deny that he was familiar with members of the sect. It is interesting that earlier there was a rumour that they were building a house for him on the 37th plot in the village of Akulinino, on his personal settlement in the Balakhtinsky district of the region. It was in this area that the Church of the Last Testament was active. A coincidence? And that they, sectarians, could reconstruct the Governor's bathhouse in the Sosny residence in July-August 2020. 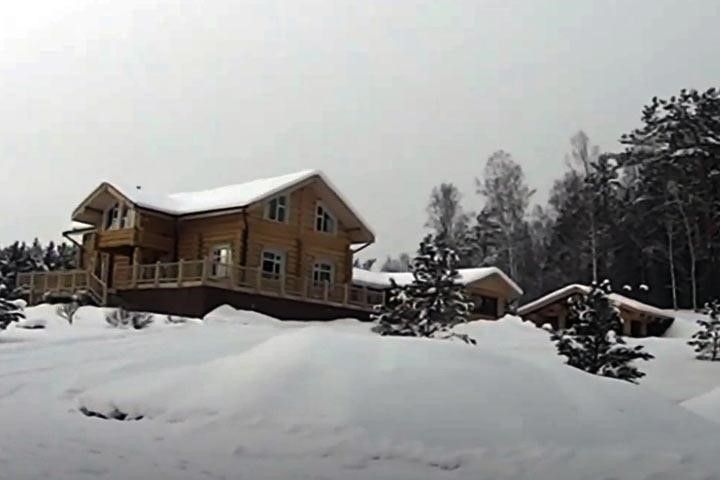 Photo of the base that could have been built by the "vissarionites" for Alexander Uss.

So far, there is no documentary confirmation of these rumours. But if it is found, Uss may not get off with just apologies and excuses. However, the situation is much more nightmarish than it may seem even based on what is written above.

The Minister of Uss Dmitry Maslodudov took office in 2018. It was during this period — 2018-2020 - that devastating forest fires took place in the Krasnoyarsk territory. In 2019, the area of fires exceeded 1 million hectares, in 2020 - about 100 thousand hectares. This is not just a disaster, it is a real apocalypse for the entire Siberian macroregion.

So far, the root cause of the disaster has not been fully established. One of the most likely versions is deliberate arson by black loggers to hide the traces of illegal deforestation. The fact that black loggers may be involved in an environmental disaster was previously mentioned by the Head of State. This was reported by Regnum.

At that time, no one could even think that the responsibility for this could be borne by Uss' administration and its favorite pseudo-spiritual figures.

If this fact is established and proved, Dmitry Maslodudov, most likely, will not be the only one of the Krasnoyarsk officials who was moved from the warm office to the pre-trial detention center. Alexander Uss will probably not be able to sit out in the bathhouse allegedly built by fans of Vissarion.

Now, investigators are actively checking the possible connection of the Vissarion community with illegal deforestation and the arrested ex-Minister of Forestry, Dmitry Maslodudov. So they must have good reason to believe that all of this is connected. 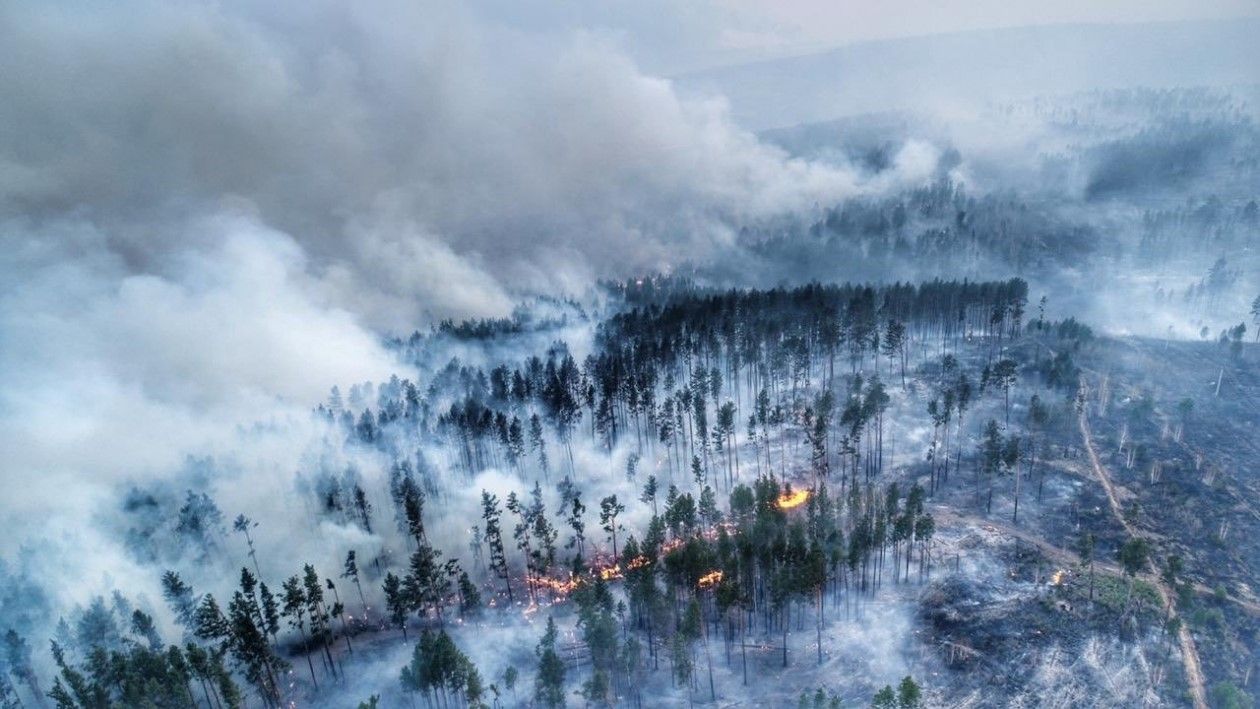 Can monstrous fires in the Krasnoyarsk territory be associated with illegal deforestation, sectarians and Alexander Uss?

In addition, according to the authors of the KrasNews website, allegedly Alexander Uss through the Kraseco company hired masters of the CLT for the construction of the guest compound of the assumption monastery - the charitable "brainchild" of the Governor, and individual entrepreneurs associated with the CLT suspiciously often won state tenders in the region.

An extremely remarkable fact: after the arrest of Vissarion and his followers in the City of the Sun (the base of the community in the village of Cheremshanka), all the top of the community was moved to Novosibirsk. What for? According to one version, Alexander Uss and officials close to him could have influenced the investigation in the Krasnoyarsk territory. In the case of the Novosibirsk region, it would be much more difficult to do this.

Some media outlets don't mince words at all. For example, REN TV journalists speak directly: Vissarion's sect in the Krasnoyarsk territory was funded by local authorities.

Wooden facilities of the Universiade 2019 may appear to be significant marker of possible cooperation between Uss and CLT. As Taiga.info writes, individual entrepreneur Vladislav Tkachenko - one of the co-founders of the Church of the Last Testament built them. It is registered in the village of Petropavlovsk, most of the inhabitants of which consider themselves followers of Vissarion.

Earlier, there were rumours that the already mentioned Kraslestorg company allegedly allocated 25 million rubles to "Vissarion's people" for the construction of a platform and guest houses at the festival of wooden architecture for the Universiade. It is unclear how such a structure could have been allowed anywhere at all.

Not a single person works in its staff, with an authorized capital of 10 thousand rubles. There are no assets on the balance sheet. At the end of 2019, it earned only 321 thousand rubles with revenue of 11 million. In other words, if funds were transferred through this structure, this was done without being reflected in the financial statements. How could Uss' administration not know about this?

Further, it is already known that Tkachenko received 5 million rubles and 20 cubic metres of wood from the Kraslesinvest state company for the construction of the entrance group made of pine on the island of Tatyshev. This was reported by the journalists of Taiga.Info. This company is known for being owned by the VEB.RF Bank, which is headed by Igor Shuvalov.

In other words, budget funds could simply be pumped out of it, and other serious state officials may be involved in the dirty story with deforestation, and not only Dmitry Maslodudov and, presumably, Alexander Uss and Alexander Khloponin.

"Dark forest": the business and assets of Uss

By the way, rumours about the fabulous wealth of Uss and luxury wooden cottages that could be built by sectarians from illegally cut down forests, were there earlier as well. A year before this scandal, in June 2019, Russian anti-corruption fighters on a voluntary basis wrote about the assets allegedly belonging to him for 1.5 billion rubles. This was reported by IA Khakasiya.

It should be noted that at one time Alexander Uss himself spoke about his assets and business. He is still the founder of Tsentralnoye LLC, which he inherited from his father. Today, Uss' share is in the trust management, but who will believe now that this is not a fiction?

According to the Rusprofile information service, the company for some reason does not reflect the amount of the authorized capital, and only two people work in it. At the same time, in 2019, the company managed to earn 24 million rubles with zero asset value. It looks like there's something wrong. But what is this against the background of a high-profile corruption scandal with Vissarion and forest clearings?

In addition, Uss is the founder of the Siberian Club Foundation for strategic research. It was created in 2013 for public opinion research. In 2019, the Foundation changed its Director - instead of Natalia Firyulina there appeared Pavel Vcherashniy. Regnum wrote about it.

Ms. Firyulina has been Chairman of the Krasnoyarsk city Council of Deputies since October 2018. Since 2010, she has been an adviser to the Siberian Federal University, which is associated with many scandals. Does Alexander Uss actively contribute to Firyulina's career?

This is only part of the barrage of criticism and questions that fell on Alexander Uss and his entourage. For example, PASMI journalists recall the arrest of a friend and associate of Uss, businessman Anatoly Bykov, with whom the Governor could allegedly have corrupt ties. And much more.

However, it seems that a critical mass has already accumulated in relation to Uss, and other events are already being sewn to it as if from the side of the heat. It seems that Uss' administration and the same sectarians really needed each other, but the basis of this alleged friendship was not high impulses, but very specific corrupt interests.

Even the most avid skeptics suggest that Alexander Uss will not be able to sit in his chair after such a flurry of scandals. The words of the President, who demanded results in the fight against illegal deforestation against the background of noise with Vissarion and Dmitry Maslodudov, are not just a signal but a stroke of a bell. The bell for the politician, MP, businessman Alexander Uss and his "highly spiritual" friends and associates.