Will oligarch Roman Trotsenko develop the Severnaya Zvezda project, registered to an offshore company, at the expense of Russian taxpayers' money?

As the correspondent of The Moscow Post reports, for the export of coal of the Severnaya Zvezda project Roman Trotsenko will need 30 vessels along the Northern Sea Route by 2032. Taking into account the presence on the market of only two vessels owned by the GTLK group, it is necessary to build another 28 Arc5 class bulk carriers with a total cost of $1.4 billion. Severnaya Zvezda itself does not plan to order them, but wants to find a partner and take the vessels for freight - presumably they will work with Sovcomflot. But the company now does not have a fleet to transport such a tonnage, but there are debts. Severnaya Zvezda is also "minus", and the share of the founder - the Cyprus organization - is pledged to VTB. Does Mr. Trotsenko really intend to develop his business for the money of the state bank? At the same time, the funds will flow quite legally overseas.

As noted in the market, the need to build such a large fleet will significantly increase the cost of an already expensive project. However, the funds are miraculously "flocking" to it: for example, investments in the Severnaya Zvezda project will amount to more than 45 billion rubles.

According to Rusprofile, Severnaya Zvezda LLC is currently going through hard times: with zero revenue, it has losses of 52 million rubles. It is not surprising, because in the company where there is not a single employee, there is simply no one to earn money. The sole founder is INPATENIXO HOLDINGS LIMITED, whose share was pledged to VTB for 72 months at the end of last year. That is, in fact, now budget funds are being poured into Trotsenko's brainchild.

However, there is concern that they may eventually "dissolve" in foreign accounts. After all, INPATENIXO HOLDINGS LIMITED itself raises questions. The director of the company is Eleni Antoniou, who, according to the Opencorporates database, is also listed as the head of more than 120 organizations in Cyprus and Greece. 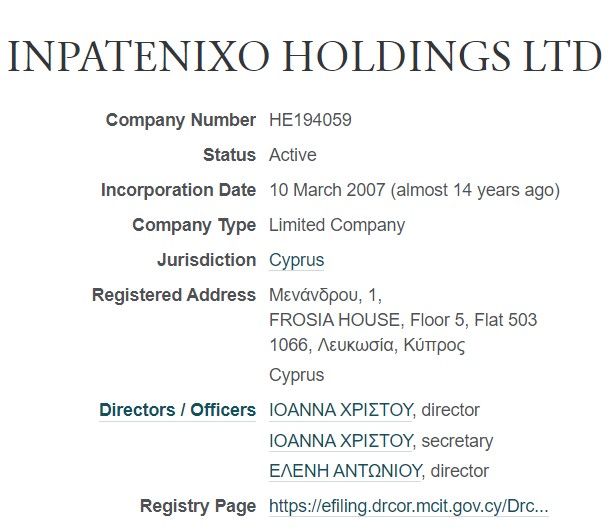 Until the end of 2018, INPATENIXO HOLDINGS LIMITED was listed as the founder of Severnaya Zvezda LLC, which is not doing better: revenue of 61 million rubles, losses - 2.4 million rubles. Did the funds "flow" to the offshore?

Let's note one more "piquant" moment: Severnaya Zvezda plans to work along the Northern Sea Route, which is of strategic importance for Russia. And there, without a second thought, they will launch an office that is registered to a "foreigner"?

In general, it is unlikely that the construction of ships in the interests of Trotsenko will be sponsored by him. In this case, it is clear why his choice fell on Sovcomflot - a company that is fully owned by the state. And so it exists for our taxes. At the same time, according to the company's report, the net debt of Sovcomflot for the first 9 months of 2020 is $2.852 billion. Recently, the market started talking about the fact that the company is able to repay it in 3 years, but in connection with the latest news, there are concerns: is it possible that Trotsenko will drag the state-owned company into the abyss of losses after Severnaya Zvezda?

Syradasaysky coal deposit located in the Krasnoyarsk region belongs to Severnaya Zvezda. In 2008, the company won a license for this field in Taimyr, the raw materials from which it plans to transport by water now. The development is still ongoing.

It was rumoured that Trotsenko managed to get a license for a reason, he allegedly has to say "thank you" for this to his extensive connections in business and the public sector. The fact is that before the creation of AEON Corporation (which includes Severnaya Zvezda), he was the general director of JSC Moscow River Shipping Company. And in 2009, he was appointed president of the United Shipbuilding Corporation. It is also worth noting that until May 2017, Severnaya Zvezda was affiliated with Vladimir Potanin's Norilsk Nickel, according to the official reports of the plant. Does it mean that it was the nickel magnate who could help in obtaining the license?

In addition, Trotsenko is probably "burning" with the desire to quickly start "cutting" wood from the Arctic Mining Company, 75% of which he received last year from the successors of the deceased Dmitry Bosov. The billionaire announced his intention to gain full control of the organization by buying out the remaining share from Bosov's former partner Alexander Isaev. At the same time, as RBC wrote, at the time of the transaction there is a fine of 600 million rubles "hanging" on  the Arctic Mining Company. Has Trotsenko multiplied his losses?

Moreover, at the end of 2019, Bosov said that he was going to reduce the plan for coal production in the Arctic by a third, as RBC wrote. His  VostokUgol "moved" to work on the Northern Sea Route together with Trotsenko. Is everything in the hands of the latter now?

Recently, the oligarch has been actively entering the mining business - he stated that he wants to consolidate a number of mining assets. Thus, since last year, he has control of GeoProMining Gold. As RBC wrote, he was looking at another company - GV Gold.

Until recently, he owned a stake in the gold mining company Petropavlovsk, which he then sold to Yuzhuralzoloto of another prominent mining oligarch, Konstantin Strukov. Moreover, the latter, according to the side of the company's founding father Pavel Maslovsky, gained influence in a not entirely friendly way, as previously described in detail by The Moscow Post. Could Trotsenko help Strukov to get the company?

A friend of the oligarchs

In this case, Severnaya Zvezda can work in the interests of someone other than Trotsenko. Behind the businessman is the head of Rosneft, Igor Sechin, whose adviser he has been working since 2012, also overseeing the company's offshore projects. It was rumoured that the oligarch, in the interests of Sechin, helped to gain control of the Murmansk company Polar Terminal, which then allegedly came under the control of an oil monopolist.

At one time, Trotsenko bought the former Levenson printing house in the centre of Moscow from VTB-Capital, which the head of Rosneft allegedly looked at. At the same time, he probably bought the object at an undervalued price - about 2 billion rubles instead of 6, which the seller wanted to get. As evil tongues gossiped, these were the terms of the secret deal between Sechin and the head of VTB, Andrey Kostin.

It can be assumed that even now the share of a foreign company in Severnaya Zvezda turned out to be owned by VTB for a reason. Did the influential patron try again? Apparently, Trotsenko and Sechin have "established bridges" with Kostin.

There were rumours that at one time he helped the head of the state corporation to "attack" Transneft of Nikolai Tokarev in connection with the situation with contaminated raw materials in the Druzhba oil pipeline. Shortly before that, Trotsenko purchased the Volgograd plant named Khimprom, which produces carbon tetrachloride. And a month after the purchase, there was a major international scandal: the oil in the Druzhba pipeline was contaminated with a certain organochlorine.

By the way, an extremely limited number of enterprises is engaged in the production of carbon tetrachloride. Another of them is PJSC Khimprom, owned by Renova of Viktor Vekselberg. And Mr. Tokarev also cooperates with him - in the aviation industry.

Thus, recently it became known that in the Magadan region Viktor Vekselberg and Roman Trotsenko decided to jointly develop the local airport Sokol. Many people know Vekselberg's attraction to the "sky" - his holding Airports of Regions now includes seven airways of the country and he does not plan to stop there. Rumour-mongers even attribute the billionaire the desire to create his own airline in the Far East, where he will soon "turn around" with Trotsenko. The latter controls Novaport, the largest network of regional airports operating throughout Russia, from Kaliningrad to Magadan.

For sure, the development of Severnaya Zvezda helps to get acquainted with such influential people as Sechin and Vekselberg. Perhaps that is why money "flocks" to Trotsenko - including state money. And no one cares why the oligarch has these funds "evaporate" soon.