The judicial system tripped over "CROC"

Another public procurement for the ministers of Themis turned into a scandal. The names of Andrei Kostin and Igor Sechin may sound in the case.

According to sources of The Moscow Post, the Investigative Committee began an investigation into the theft of funds allocated for the program "Assistance to the Development of the Judicial System of the Russian Federation." Sources admit that CROC Incorporated, which was engaged in the supply of equipment, seriously overestimated the price. If the information is confirmed, the damage may amount to about 1.5 billion rubles.

In addition to CROC Incorporated, according to the documents available to the editorial board, FORCE - Development Center won in a row. To be more precise - a joint venture of these two organizations.

The Moscow Post correspondent figured out who is the beneficiary of the companies and where the state funds could go. 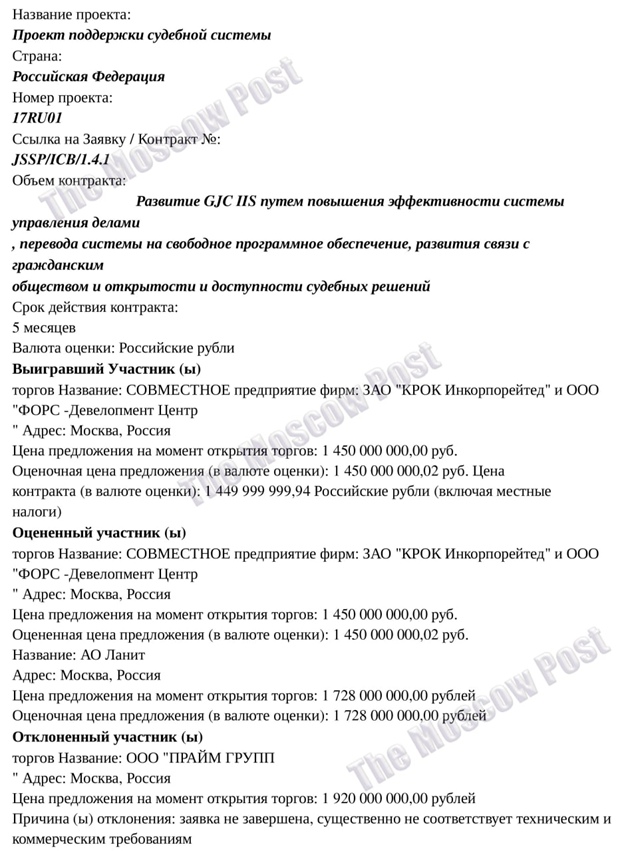 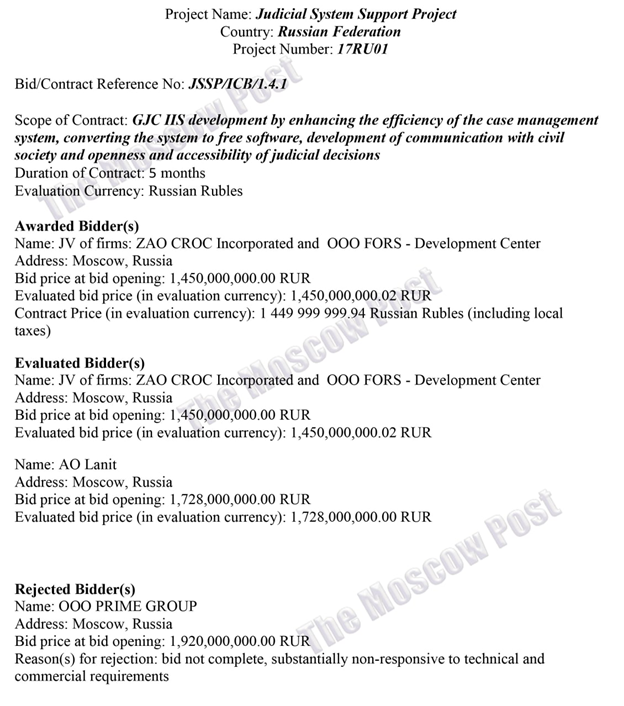 Old song in a new way

"CROC Incorporated" is led by Boris Bobrovnikov. From 2002 to 2021, he was on the list of its beneficiaries. His younger brother Ivan was also present there. Now the founders, according to YEGYURL, as if not. Most likely, the same persons remain the beneficiaries.

As you know, Igor Sechin's company mainly registers only "its own," and therefore it will be natural to conclude that success in the bosom of government orders, despite its tarnished reputation, can the company provide the contact established by Bobrovnikov with Sechin? If the head of the most powerful state corporation benefits from Bobrovnikov's actions, you can "shove" anything.

The company in 2013 appeared in a very similar situation with the supply of IBM servers to Sberbank - Versiya reported. It turned out that the company quadrupled the cost of servers, and as a result, the bank was "heated" by hundreds of millions of dollars.

In addition, as part of the investigation, a case was initiated on non-payment of customs duties. The Moscow Post covered the story in detail. IBM then broke off relations with KROK, as did the state bank.

However, in 2018, rumors spread about the resumption of cooperation with the state bank - not wise, judging by the fact that neither IBM nor Sberbank initially drew attention to the extreme opacity of the transaction, all three were, as they say, in the same boat.

Of course, cooperation with the bank is beneficial to Kroku, but not so necessary. The company's portfolio of government contracts is more than 55 billion rubles. Currently, Transneft is the largest customer.

By the way, if you disassemble her contracts, some questions arise - we don't undertake to argue for the pricing policy, but the deadlines for fulfilling obligations have been violated. At the same time, the customer practically does not sue the executor about this. Does Transneft really not matter where its money went? 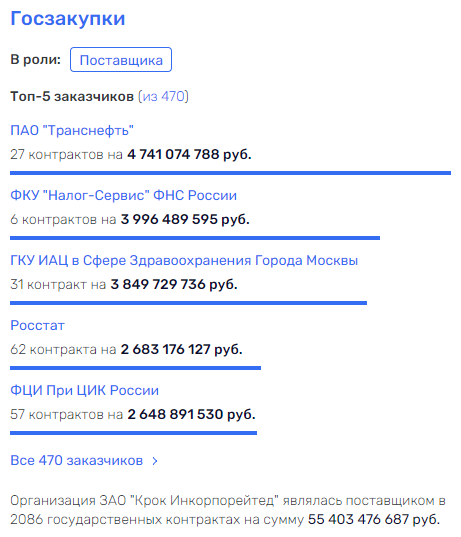 In November 2016, KROK again turned out to be a defendant in the case, this time initiated by the Federal Antimonopoly Service against suppliers of equipment for GAS Vybory - the company was suspected of a cartel conspiracy with five more companies - Business Computers Group LLC, AMI-NETWORK LLC, Superwave Group LLC, Krak CJSC ftway corporation PLC, "LLC" Production Company Aquarius. " There was also a story with the delivery to the Central Election Commission of ballot boxes for voting at inflated prices. This was reported by Versiya.

By the way, after it, the CEC still continued to cooperate with the corporation. Photo: https://www.rusprofile.ru

I wonder how the supplier, who does not get out of stories like this, wins large state tenders over and over again... and does Mr. Sechin help him in this?

With whom "in the same boat" VTB, Sberbank and the government of the Altai Territory

The company is also not offended by government contracts and is a fairly large supplier. Force Distribution is also registered on Golosov, the only customer of which is Sberbank; and Ai-Force, which earned more than 277 million rubles on the state order. 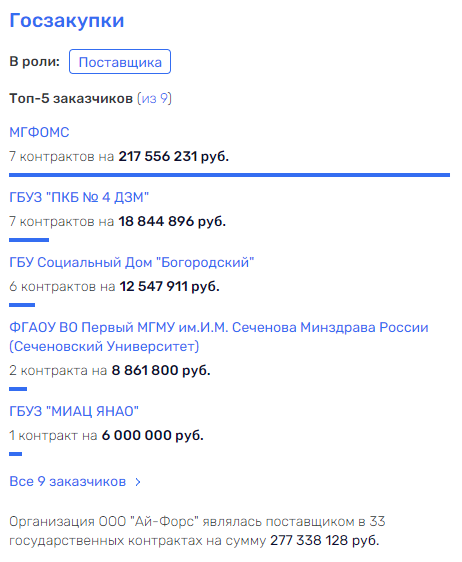 For some time, Golos also worked at Flekssoft, which was engaged in software and carried out orders from VTB and Sibsotsbank, owned by the Ministry of Economic Development of the Altai Territory.

When we analyzed the documents, we saw that theoretically there is where to withdraw money. For example, the controlled company is FBSI Group with zero employees and a jump-based revenue schedule in the range from -200 to 200 thousand rubles, registered for a certain Elena Sokolova, who, with the exception of this case, has an absolutely empty entrepreneurial biography.

Or I-Force International - currently a company with one employee and zero revenue - is in liquidation. By the way, except for Golosov, it is also issued on I-Force. It would be very convenient to transfer money from numerous government contracts of this company.

According to history sources, there may be such iconic personalities as Andrei Kostin, and former governor Alexander Karlin.

In favor of the participation of the head of VTB, it says that the closed VTB Registrar JSC is the holder of the Flexoft shareholder register. The general director of the company Arkady Lobas is part of the Association of Banks of Russia. It is very likely that connections with Kostin potentially "sprouted" from there.

Among other things, the company "FORCE" on various forums is accused of non-payment of wages and violation of working conditions - allegedly people are forced to work almost 24 hours a day, despite the fact that completely different things are told at the interview.

Among the court cases in which "FORCE - Development Center" is the defendant and, however, most of them are cases of non-fulfillment of obligations under contract agreements.

Two enforcement proceedings were instituted against I-Fort, but both were terminated with the wording "on the basis of the impossibility of establishing the location of the debtor, his property, or obtaining information about the presence of funds and other valuables belonging to him in accounts, in deposits or in storage in banks or other credit institutions."

It is very strange that the head of a large corporation, with which large state contracts are concluded monthly, and whose revenue for 2021 exceeded 138 million rubles, cannot find and recover from him the unpaid amount of insurance.

Not everything is clear

It's funny that another participant in the tender, whose application was being considered, was the Lanit group, a scandalous company, which in 2019 appeared in a scandal with the withdrawal of 603 million rubles to create an information system for GIS TEK.

The application of the least scandalous contractor, Prime Group, was rejected. Did customers choose according to the principle - who has a richer biography? Or will investigators have to take a closer look at officials of the Federal Bailiff Service?