The finale of the "moire" banker

The Editorial Board received information about the possible arrest of the former owner of Transnational Bank Sergey Kononov.

According to our sources, the court arrested the owner of the Transnational Bank for two months.

Recall that the credit institution, which was "taxied" by Sergey Borisovich Kononov, "played into the box" back in 2015.

The Moscow Post wrote about this in its investigation.

According to our information, before his possible arrest, he not only went headlong into oil affairs and "chases" kerosene on Sakhalin Island, but even after the ruin of the Transnational Bank went to developers: he is building residential quarters in Skolkovo, Krasnogorsk and Yaroslavl. Does not forget its offshore on the island of Cyprus.

The correspondent of The Moscow Post understood the latest events related to the secret life and opaque business of Sergei Kononov.

"Silence of the lambs" ends?

According to our source, which has not yet been confirmed by the court at the request of the investigation, he ruled on a new measure of restraint to S.B. Kononov - detention for 2 months. Earlier, according to the source, he had an "unusual" measure - monetary bail, which allowed Kononov, being under criminal proceedings, to travel around the world even without prior notification of the investigator. " 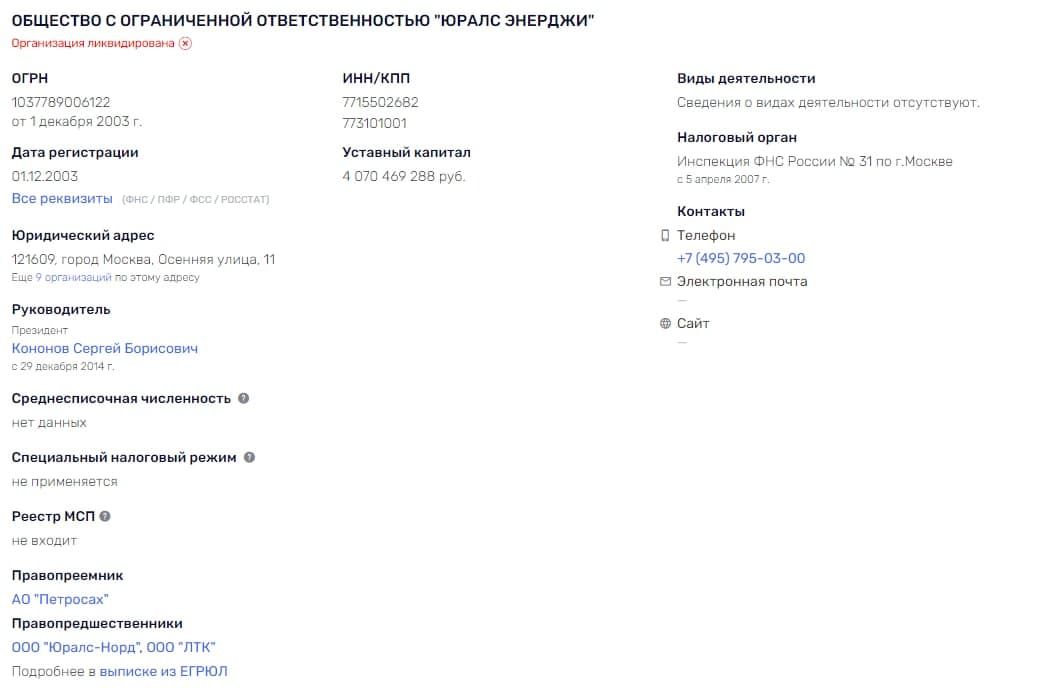 At the moment, damning testimony is expected against Sergei Kononov of the main defendants in the criminal case of embezzlement of funds from TNB Bank. This testimony can be given by former bank president Alla Borisovna Bondaruk and former bank vice president Olga Leonidovna Sukhoguzova.

Before that, they generously received money from Kononov for their silence. But there is no one to pay, judging by the latest events.

The testimony of Dmitry Paltov, on which, according to our informant, almost all of Kononov's assets, as well as the testimony of his main lawyer, Denis Kutishenko, who participated in all legal schemes and dubious transactions of Mr. Kononov, can play a role. And, undoubtedly, by the way, there will be confessions of Vladimir Shestakov, the general director of Petrosakh Energy LLC, who knows about all the business processes of Urals Energy LLC and its Russian subsidiaries. 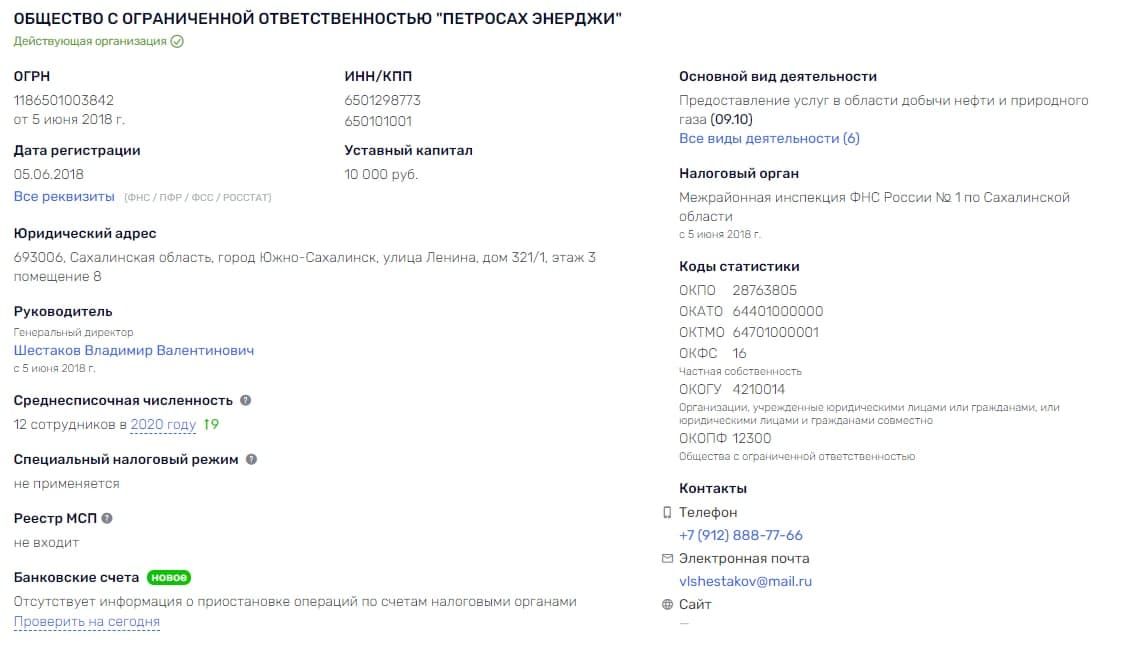 As our informant Kononov previously claimed, he owns Urals Energy LLC through an offshore in Cyprus where he owns more than 40% of the shares. And another part of the shares is issued for Dmitry Paltov.

Thus, Kononov owns almost 50% of the shares of a large Cypriot company. And the purchase of these shares was carried out with TNB money, including the funds of hockey player Alexander Radulov, which Kononov managed as his own. And of course, it was not without the various cunning cash transactions that the senior employees of the bank made for Mr. Kononov.

To Sakhalin, for kerosene

The former owner of Transnational Bank Kononov huddled since 2015. Zero information on the Internet, the whole photo bank is well cleaned.

But the miss came out in the winter of 2019, when Mr. Kononov flew to Yuzhno-Sakhalinsk to bow to Governor Valery Limarenko. The "court" photographer took several pictures during the negotiations...

And he lit Mr. Kononov!

What did the "grave digger" of the Transnational Bank ask, he was at that time the president of Petrosakh JSC Sergey Kononov from the "atomic grandfather" (so ill-wishers are called Mr. Limarenko on Sakhalin)? 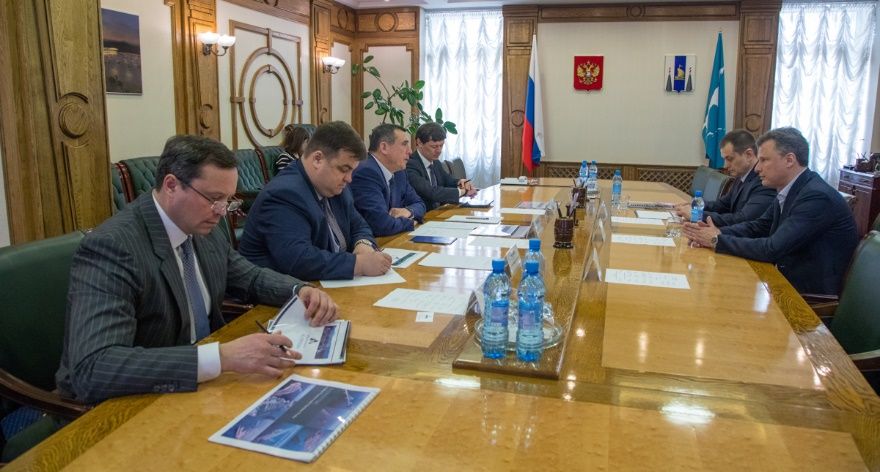 During negotiations with the Governor of the Sakhalin Region Valery Limarenko

Sergey Kononov appealed to the Government of the Sakhalin Region with a request to assist in the acquisition of raw materials from oil producing enterprises in the region to load its oil refinery.

Kononov explained to Limarenko that the plant is not sufficiently loaded.

"We could process an additional 200-300 thousand tons of oil. In our opinion, the most effective product is kerosene, which is used as aircraft fuel, "the former banker emphasized this.

The products of the refinery are sold on the Sakhalin market, which is largely dependent on imported fuel from the mainland.

By the way, Petrosakh JSC has not a very good file: recently this office has been a participant in 10 different trials. And even earlier, the company took part in 66 (completed) court cases. 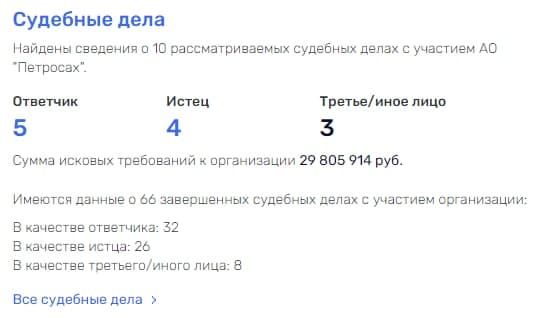 Sakhalin Valery Limarenko supported the initiative of Petrosakh JSC. He noted the need to create conditions for local production of petroleum products at market prices.

The development of oil refining will increase the transportation of oil cargo, including along the island highway, where the loading of cargo nomenclature is declining: if 112 thousand tons of oil products were shipped to railway transport on Sakhalin in 2012, then in 2018 - only 36 thousand tons.

And the Internet got a pretty fresh picture of Mr. Kononov. 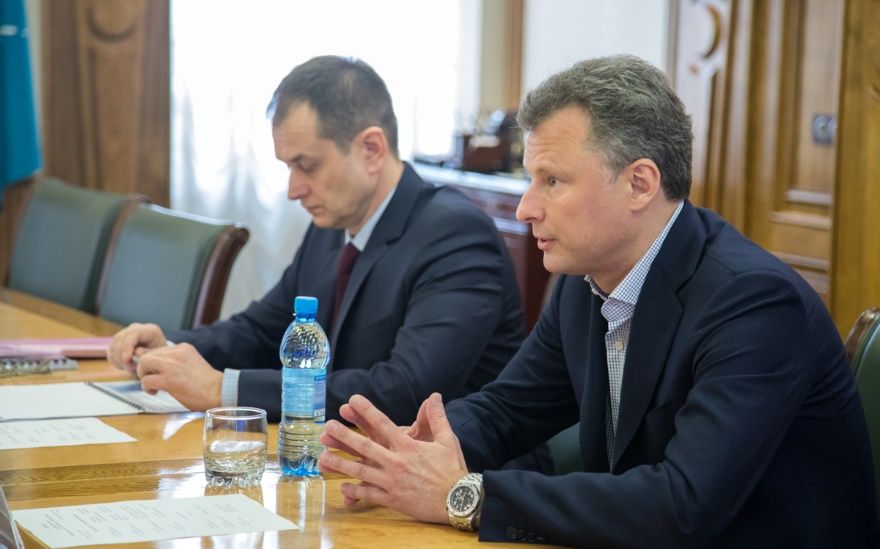 It turns out that Sergey Kononov conducts a rather large-scale business in Sakhalin. In the sphere of his interests, not only oil production, but also the activities of the Kholm seaport.

In these great affairs, he is helped by the already mentioned lawyer with a damaged reputation Denis Kutishenko and another businessman Roman Shvets. 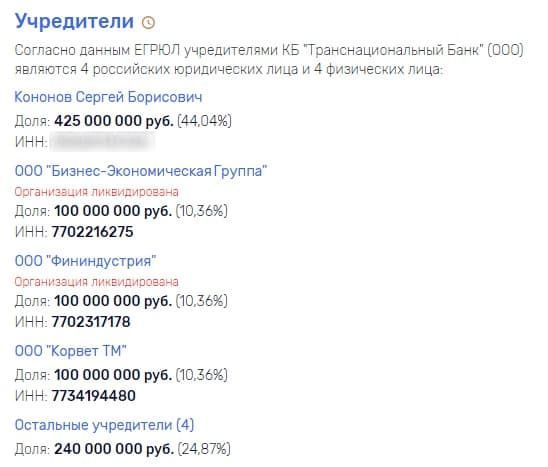 As of April 1, 2015, Transnational Bank ranked 185 in the banking system of the Russian Federation in terms of its assets.

As it turned out a little later, it was in this bank that the famous hockey player, Dallas Stars striker Alexander Radulov, kept his savings with a friend Sergei Kononov. 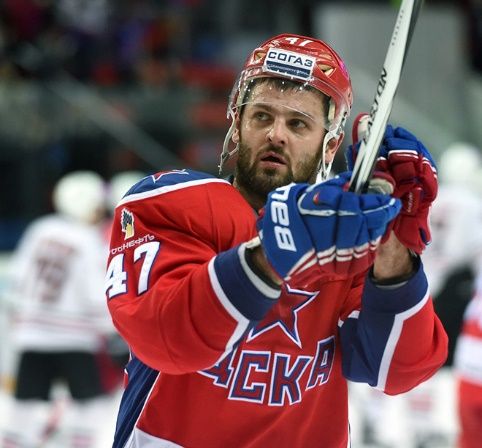 And when the bank "fell asleep," Kononov asked Alexander Radulov to "wait three years." And in return, as if on bail, he gave two premises in the center of the capital at a cost of $25 million.

The "deal" took place at a distance, since the hockey player was in the United States of America. But arriving at the First See, Radulov found out that Kononov deceived him by 1.5 billion rubles: the premises given by Kononov's generous hand on bail actually cost 3 million "green," and not 25 "lemons."

The authors of the message sent to the editorial office are asking to pay attention to the fact that the case against Sergei Borisovich Kononov, who "drowned" Transnational Bank and the "section" of Alexander Radulov, has been very sluggish lately...

And the capital's investigator, Lieutenant Colonel Trofimov from the TFR, did not at all seek to investigate the "collapse" of the Transnational Bank.

It turns out that Mr. Kononov - until an investigation was published on the activities of a banker fraudster - had a reliable "roof"? After all, Mr. Kononov was not attracted for a long time. Moreover, released on large cash bail? And he even went outside the cordon...

Offices in Moscow and Murmansk

It turns out that Mr. Kononov has been afloat for more than 6 years? And by no means became a beggar, on the contrary, he is acquired as president of Urals Energy LLC with an office in the capital.

After Kononov actually gained control of this company, he decided by a majority vote to delist shares from the London exchange. This was also told by our informant.

The goal is allegedly one - not to answer questions from financial and other English regulators of the exchange about the origin of the funds for which such a large stake in Urals Energy LLC was bought. And with the help of a lawyer, Kutishenko managed to do this back in 2018.

After that, Sergey Kononov began to manage this company as completely his own. This company, through 100% subsidiaries, owns oil production assets in the Murmansk region - in JSC ArcceNeft. 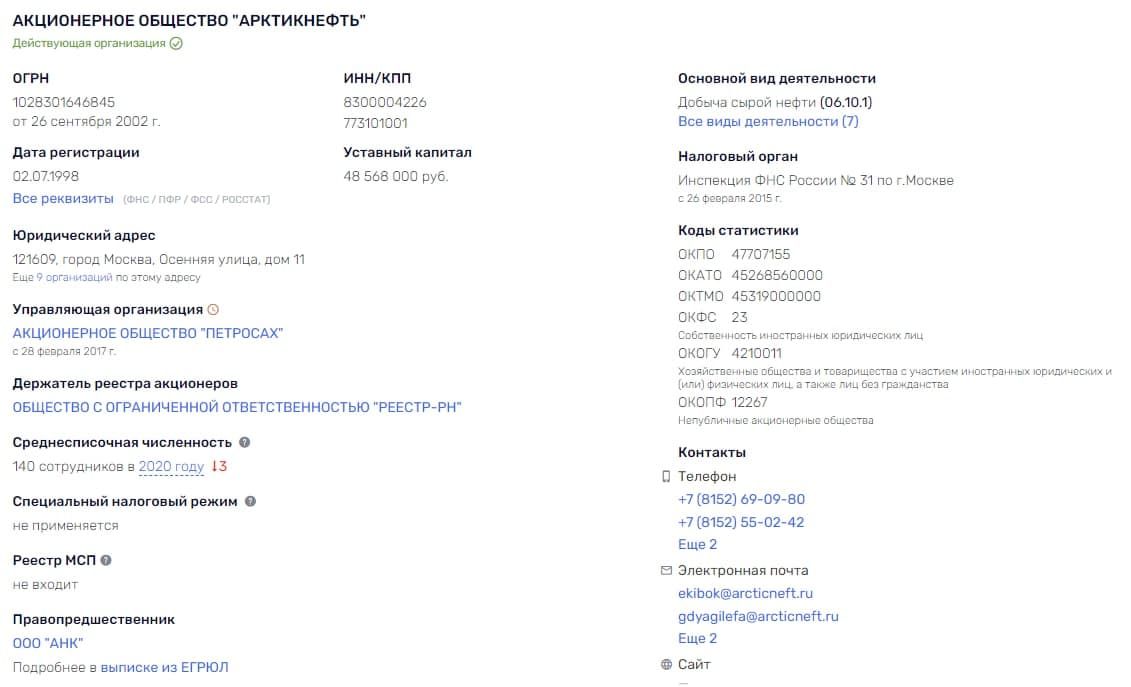 Sergey Kononov takes money from the sale of oil and petroleum products - as usual.

It is noteworthy that the purchase of these assets was financed by the money of the Transnational Bank. And at the same time, Mr. Kononov is not shy about having an official position - president of Urals Energy LLC, with an office in Moscow.

As our informant said, today Mr. Kononov has several large housing projects in Skolkovo, Krasnogorsk and Yaroslavl with a serious share. 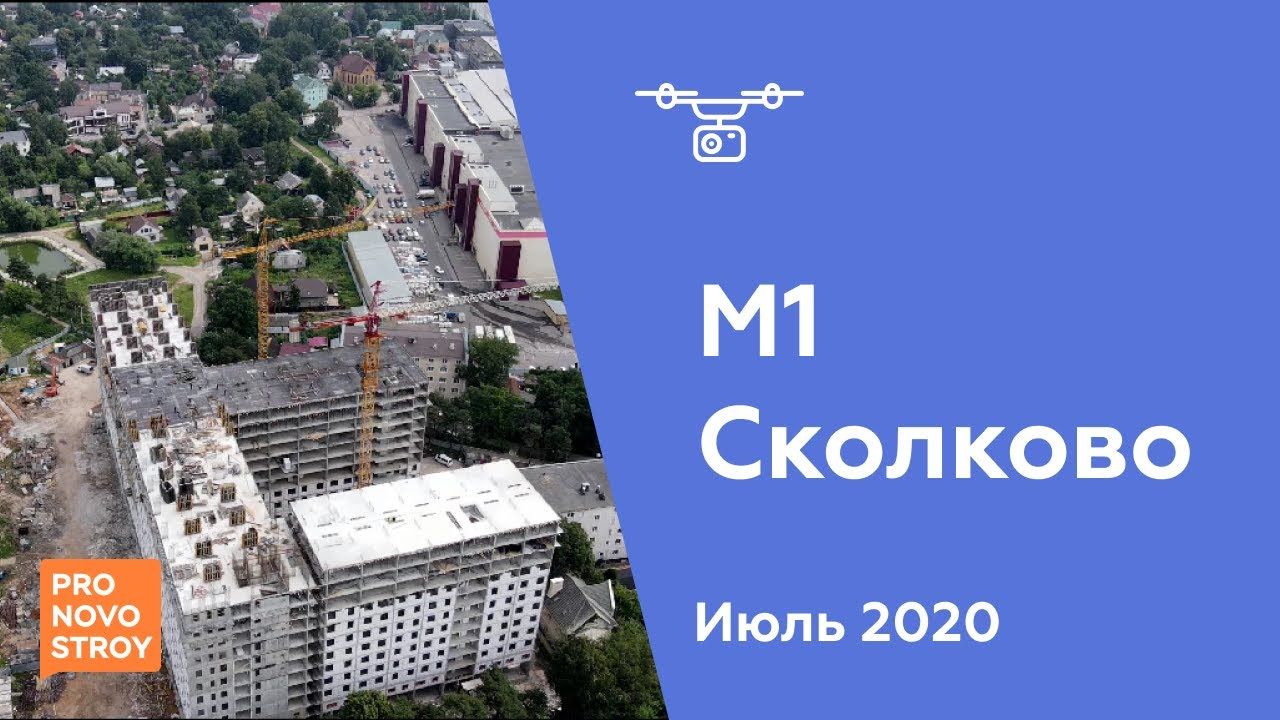 And all these projects were also financed at one time from the Transnational Bank, on the security of the projects themselves, but before revoking the license, Kononov took them out of the bank and issued them for his people, including the same Dmitry Paltov. 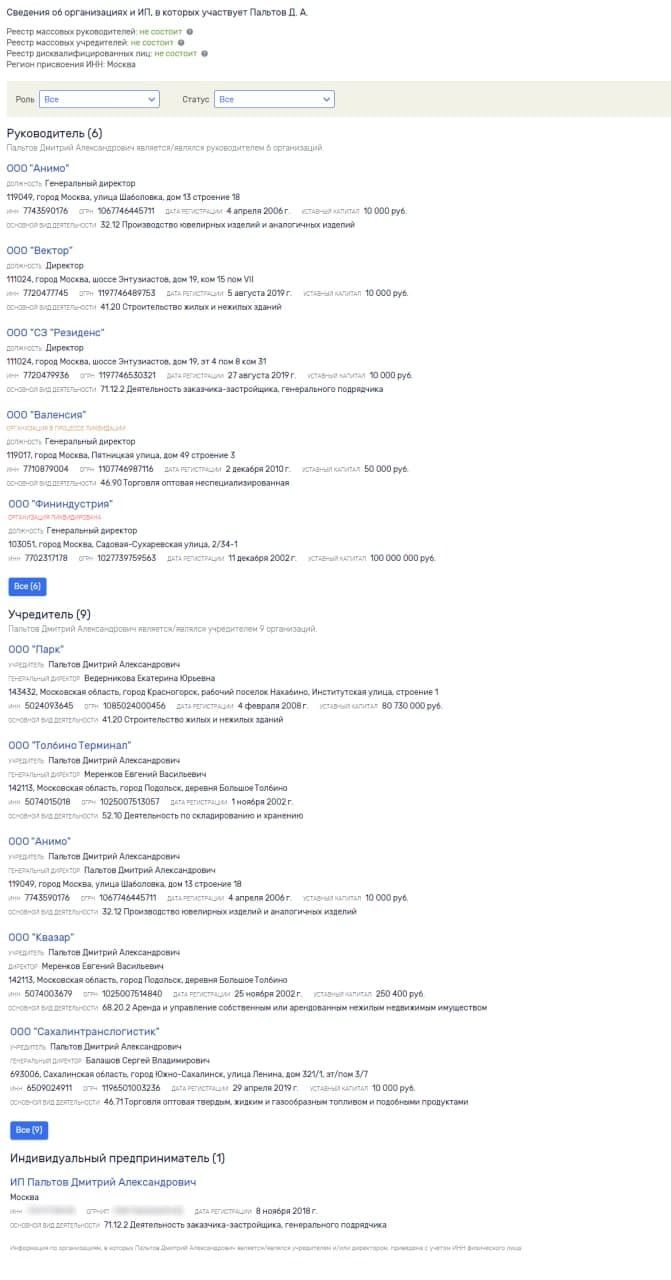 Another person of Kononov oversees these projects - Roman Shvets.

And, indeed, it was possible to find "traces" of Mr. Kononov in the Skolkovo innovation center, where his company "Environment" is building the housing complex М1 Skolkovo. 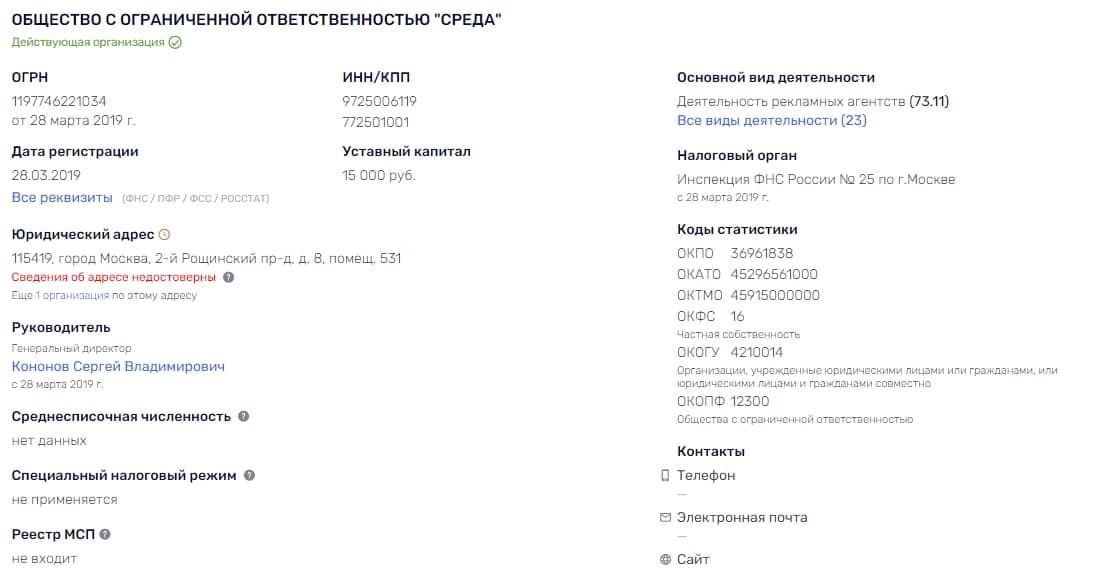 Curiously, when registering, Mr. Kononov indicated the address: Moscow, Second Roshchinsky passage, house number 8, room 531... It turned out that this address is fake! 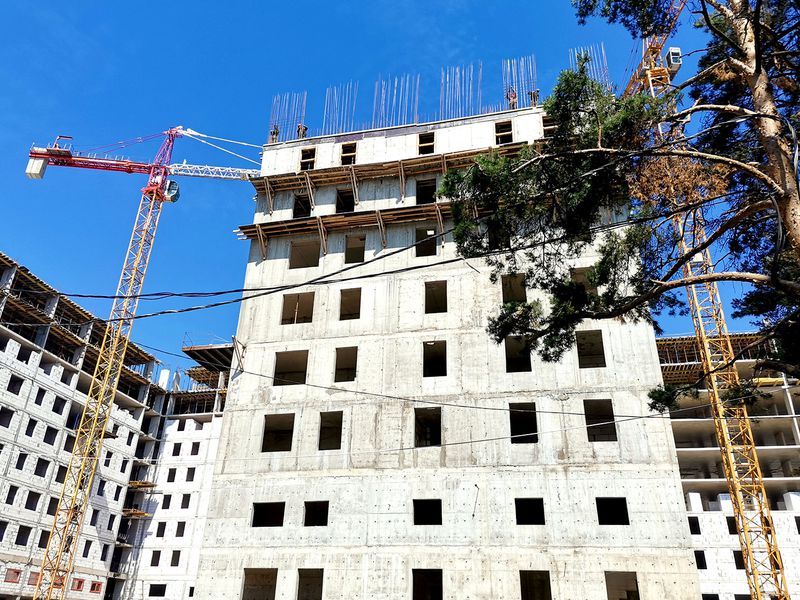 In general, it is building "anthills" in Skolkovo today, as the people call apartments 19 square meters. m from Kononov.

Under the protection of Yeltsin's family?

They say Kononov felt like a fish in the water everywhere, since he has long had a strong rear in the person of relatives of the former President of the Russian Federation Boris Yeltsin. In particular, Kononov has been friends with Yeltsin's former son-in-law Leonid Dyachenko for many years. And supposedly it was this very friendship with Tatyana Dyachenko's ex-husband that opens (or opened?) Any doors for Kononov.

And at the same time closes (or closed?) Folders with cases on the tables of investigators... 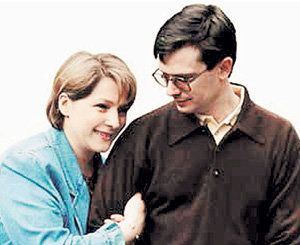 One way or another, but shortly after the disaster with the Transnational Bank, Mr. Kononov suddenly found himself both the owner of an oil company and the holder of shares in the Kholm seaport on Sakhalin Island. And, as it now turns out, and the builder of residential quarters in Skolkovo, Krasnogorsk and Yaroslavl...

Maybe the fact is that one of the founders of Urals Energy was Leonid Dyachenko?

Further, it is curious that the Transnational Bank is almost nowhere visible in open sources, as a credit institution with a dubious history. Observers assure: Sergey Kononov skillfully covered all his dubious schemes in the name of his son-in-law Boris Yeltsin.

But, apparently, Mr. Dyachenko's influence was still not enough if on June 18 this year. Sergey Kononov was finally arrested.