How the Apazov family achieved success in the field of public procurement of medicines.

According to The Moscow Post, the Ministry of Health has purchased the Kanakinumab medicine for the treatment of auto-inflammatory diseases for 2021 for 1.49 billion rubles, the supplier was the Pharmimex company, controlled by Alexander and Tatiana Apazovs, as well as their daughter Inga Nizharadze. The company is tightly "sitting" on state contracts, of which it has as much as 201 billion rubles. However, there are suspicions that the company gets them for a reason: allegedly, it has the necessary connections both at the federal and regional levels. At the same time, the business family does not seem to particularly like being talked about, so they "struggle" with critical publications about themselves.

According to VADEMECUM, in June 2020, the Kinakinumab medicine was included in the temporary recommendations of the Ministry of Health for the treatment, diagnosis and prevention of COVID-19, and that is the reason of the large-scale purchase of the medicine, which is used for the treatment of not very common diseases. This purchase is part of the state program of high-cost nosologies, which Pharmimex has already mastered well. So, according to Vedomosti, in 2020, it won all tenders for the supply of blood products under the high-cost nosologies, thus increasing the amount of contracts concluded by more than 2 times – from 6.8 billion rubles in 2019 to 17.8 billion in 2020. It seems that the Apazovs have found their "gold mine".

According to Rusprofile, the company receives new contracts almost every day. It is not surprising that they have already "run up" more than 25.5 thousand for a lot of money.  At the same time, the "top" supplier, is the Ministry of Health of Russia, from which the company received contracts for more than 88 billion rubles. However, there is a version that the success in this field is due to the good relations of Alexander Apazov with Deputy Chairman of the Government Tatyana Golikova. 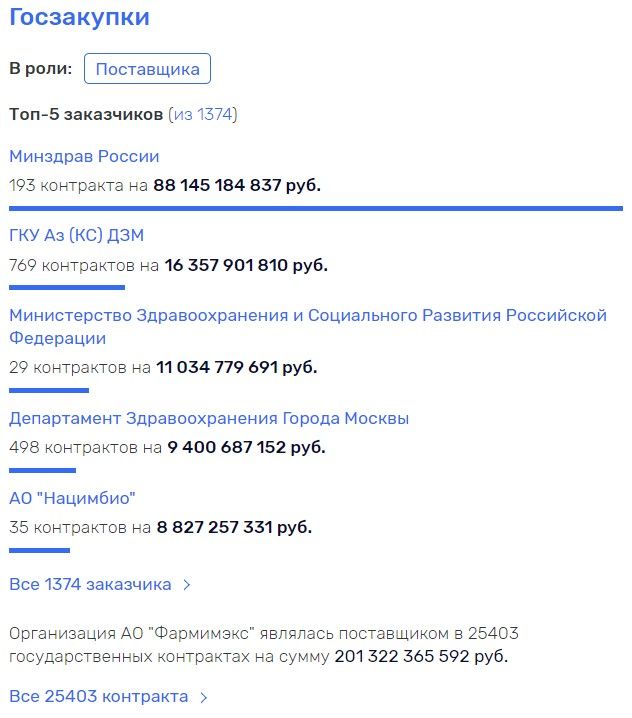 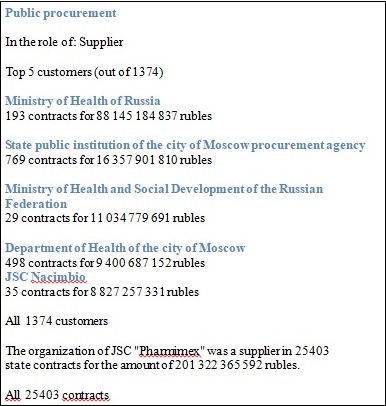 In support of this, we can recall the story of the transfer of purchases of orphan medicines to the federal level in 2018, initiated by Golikova. According to VADEMECUM, Apazov, whose company by that time already dominated the market in most regions, welcomed the transfer of purchases. However, in this case, the advantage is obviously given to large organizations, while small and medium-sized businesses remain "overboard". Or maybe that was the plan.

It is curious that, speaking about the advantages of centralized procurement, Apazov noted that this would guarantee the provision of medicines to patients. It is 2021 now, and Pharmimex is at the centre of a scandal because of the provision of medicines to beneficiaries of the Vladimir region. According to Vladimirskaya Gazeta, the situation became critical by mid-February: due to the non-issuance of medicines, an appeal was published by the parents of disabled children who have not received the prescribed amount since January, which became the subject of a pre-investigation check. Since then, the issue has been under the control of local people's deputies, and the leadership of the Health Department is regularly called for discussion.

Medilon-Pharmimex is engaged in the supply of preferential medicines, which denies its guilt in the supply failure. They say that medical institutions do not have any information about what is in pharmacies, so they write prescriptions for something that simply does not exist. The company also "clashed" with Rostelecom. According to Zebra, the director of the Health Department of the Vladimir region, Elena Utemova, among one of the reasons for the problems, called the fact that the local division of the telecommunications company did not fulfill the contract on time to create a single digital platform that would integrate the information networks of hospitals and pharmacies. In response, Rostelecom said that the deadline for the execution of the contract has not yet come, and the bid campaign is carried out, including in the Medilon software product (Medilon-Pharmimex LLC). Representatives of the latter hastened to disown the accusations: they say that it does not take any part in the procurement campaign, since this is not provided for in its contract with the Department of Health of the Vladimir region.

However, while the different parties to the conflict "throw" mutual claims to each other, the situation with the supply of medicines hardly changes - dozens of disabled children do not receive the necessary treatment.

Pharmimex is regularly spotted in unsightly stories. According to the FAS report, last summer, the antimonopoly authorities recognized the State Medical Institution Regional Oncological Dispensary as violating the Law on Protection of Competition. The institution has created preferential conditions for participation in the auction, including by providing information about planned purchases in advance. In total, the company received contracts for 156 million rubles from the Dispensary. A year earlier, the head doctor of the medical institution was found guilty of taking a bribe, and a criminal case was opened against the former general director of the Saratov branch of JSC Pharmimex on giving a bribe in a particularly large amount.

As they Skandaly.ru wrote, a subsidiary of Rostec, Nacimbio, bought several batches of medicines from Pharmimex, while doing this solely for the purpose of further resale under contracts with the Ministry of Health. Thus, the approximate damage to the state is estimated at 31 million rubles. Can we assume that Apazov could have known what kind of procurement scheme his company is participating in, and even have a certain benefit from it?

As Utro.ru wrote, in 2015, the security forces conducted an inspection of the pharmaceutical enterprise. The Ministry of Internal Affairs of the Russian Federation arranged it as part of the functions of detecting and suppressing environmental and tax crimes. Did the latter really take place in the company? In addition, law enforcement officers were also interested in the list of employees involved in public procurement. This may mean that even then the security forces had claims against the Apazovs.

The latter, obviously, do not really like when such information "is surfaced". Pharmimex appealed to our colleagues from Dokumenty i Fakty with a request to remove the material about the company's activities by the decision of the Arbitration Court of the Saratov region from the website. However, the publication was not in any court discussions with the firm, so it was very surprised by the fact that the court decided to remove the material. It turned out that the company of the Apazovs was suing the Peterburgskaya Gazeta news agency, which simply reprinted the material of Dokumenty i Fakty. It is curious why the businessmen did not turn directly to the primary sources? 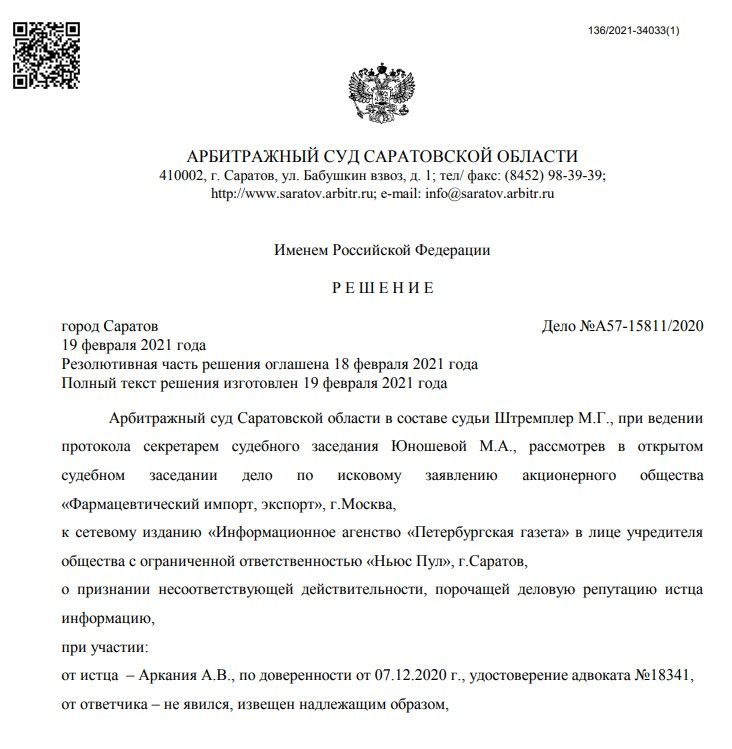 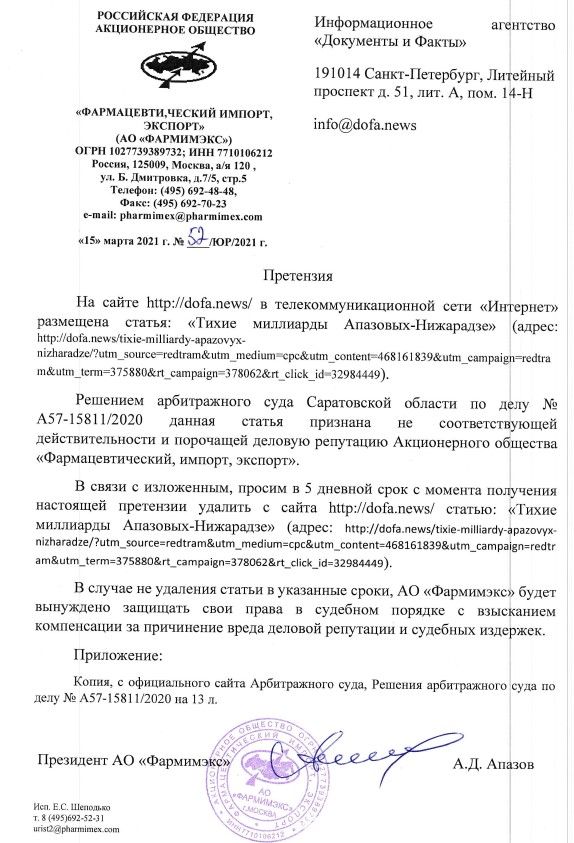 However, no matter how much you try to fight with independent journalists, it is already very difficult to "hide" information nowadays. So, a lot of interesting things can be read about Pharmimex on various websites with reviews of the work. And there the company is put a solid "minus".

For example, according to a certain Sergey Bezrukov in his review on the O rabote website, allegedly salaries in the company are below the market, they are not issued under a labor contract, but under a contract agreement, the entire document flow is conducted on paper, because the authorities in the person of the Apazovs and their daughter Nizharadze do not know how to use computers. It's downright scary to read this about a company that is also engaged in medicine development. Are these the "modern" technologies now"? 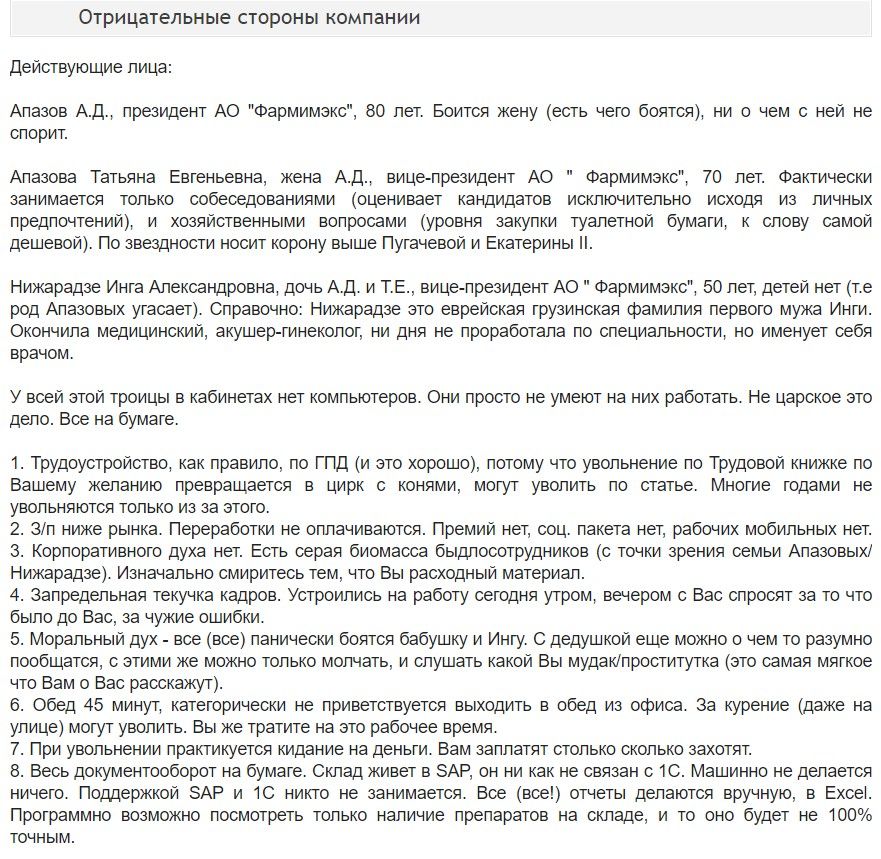 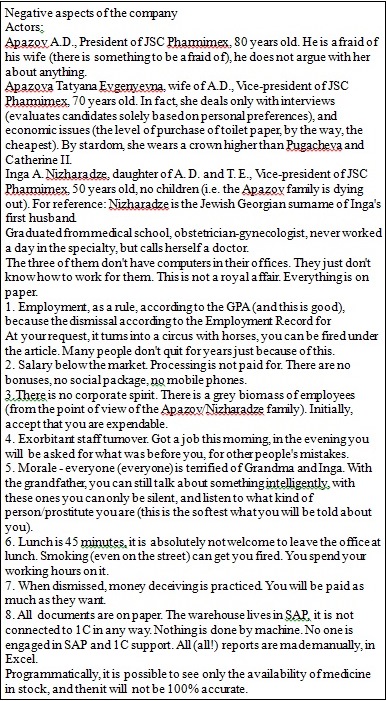 Separately, the author of the review stops at the description of the authorities. In particular, he writes that Alexander Apazov "is afraid of his wife (there is something to be afraid of), does not argue with her about anything", his wife Tatiana - "by stardom wears a crown higher than Pugacheva and Catherine II", and their daughter Inga - "graduated from medical institution, obstetrician-gynecologist, has not work a day in her specialty, but calls herself a doctor". Because of this, they say, there is an unhealthy atmosphere in the team and many are simply afraid of the leaders. However, this can only be the opinion of the "offended" employee. But it seems as if Pharmimex could "offend" too many people.

By the way, some reviews contain very interesting information about the personal life of Inga Nizharadze. For example, according to the user Lara on the Pravda-sotrudnikov website, allegedly the daughter of the Apazovs was married to the nephew of Zurab Tsereteli in the distant past, left the surname Nizharadze by her husband. 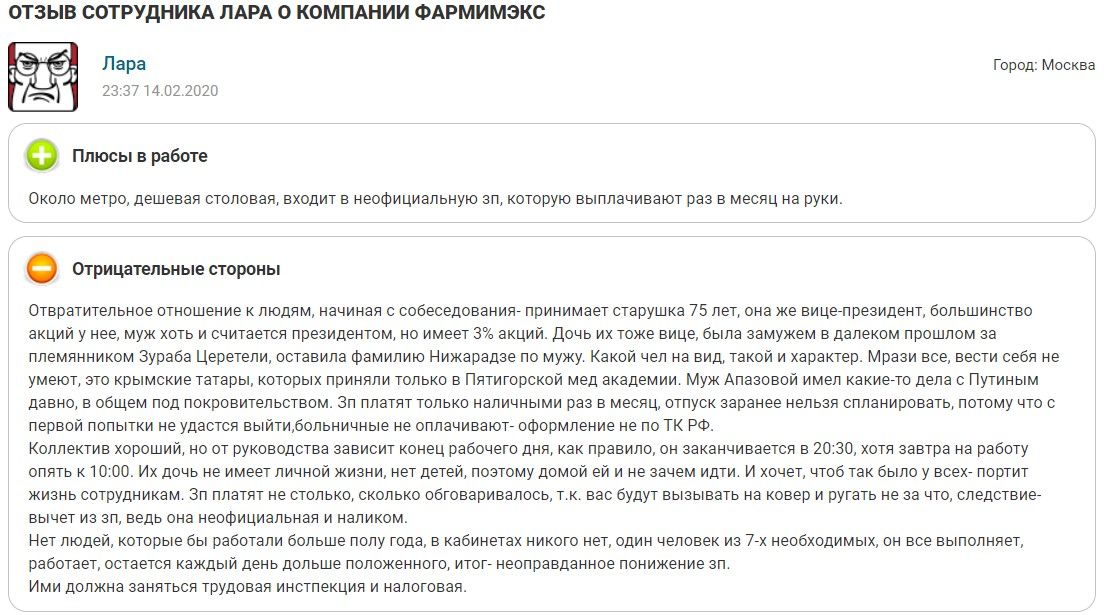 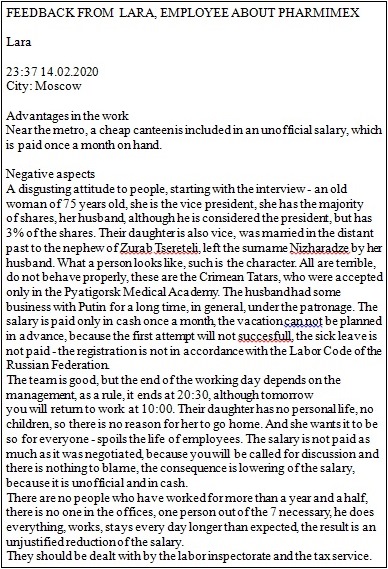 It seems that people with such a surname, which, by the way, comes from the Georgian dukes, can "climb" to the top. Thus, Inga Nizharadze became a top manager in a pharmaceutical company, her namesake Nino Nizharadze heads the Ministry of Health of Adjara (an autonomous republic within Georgia), and Lasha Nizharadze, as Sobesednik.ru wrote, became an influential criminal authority and for a long time was considered a rival of Ded Khasan. Rather interesting company!

The fact that not everything is well at Pharmimex is also evidenced by the story of how the Apazov family gained control of the company. The Moscow company was founded in 1993 as the legal successor of the Soyuzfarmatsiya All-Union Association under the Ministry of Health of the USSR and the Main Pharmacy Department of the Ministry of Health of the USSR. Alexander Apazov is known for the fact that since 1978 he worked in the management of the Main Pharmacy Department, since 1989 he headed Soyuzfarmatsiya. In fact, he was one of those who put the pharmacy industry on a market track. It is possible that the former spouse of the heiress of the Apazov couple found the money for the purchase of the enterprise.

The business family definitely does not like publicity and, it seems, even runs away from it — there is some reason why they demand to remove the article about themselves through the court. All this may indicate that entrepreneurs have something to hide. Moreover, their company, as one of the largest suppliers of the Ministry of Health, cannot but attract attention. And, as you know, such solid contracts are often received not by simple companies, but with the necessary connections.